Thousands of demonstrators protesting the death of George Floyd have remained on New York City streets in defiance of an 8pm curfew put in place by officials struggling to stanch destruction.

Thousands of demonstrators protesting the death of George Floyd have remained on New York City streets in defiance of an 8pm curfew put in place by officials struggling to stanch destruction.

Mayor Bill de Blasio doubled down on a citywide curfew, moving it up from 11pm the night before, but rejected urging from President Donald Trump and Governor Andrew Cuomo to bring in the National Guard.

"Everyone, time to go home so we can keep people safe," Mr de Blasio said on local radio shortly after the curfew took effect. 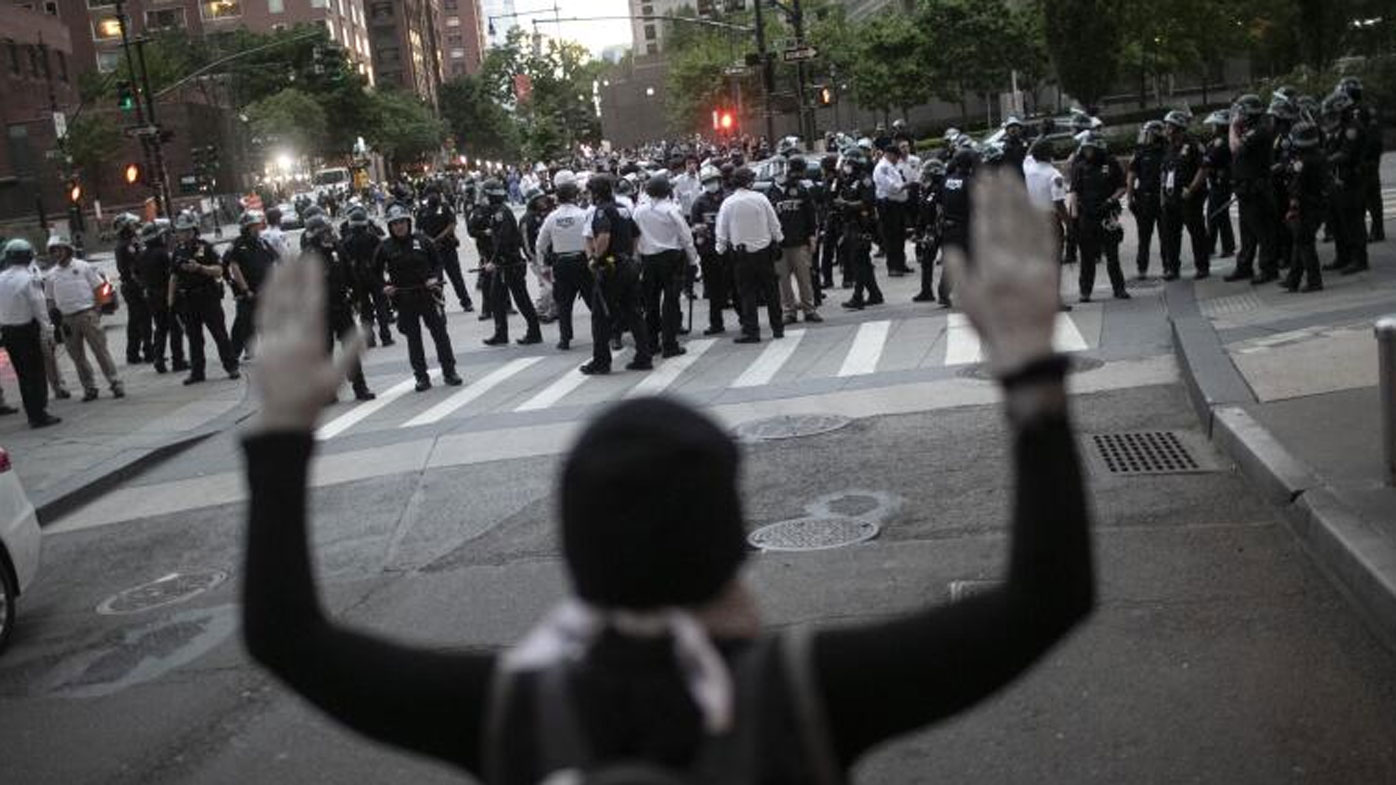 He was ignored by many around the city who continued marching throughout the city's streets. In some areas, police let people continue on their way, while making arrests in others.

Protestors on Manhattan's Upper West Side said at points they were greeted with cheers and horns by onlookers in building windows.

"I'm surprised," one of the protestors, Risha Munoz said.

"I didn't think they were gonna let us go on, but we just kept on moving and we're not stopping." 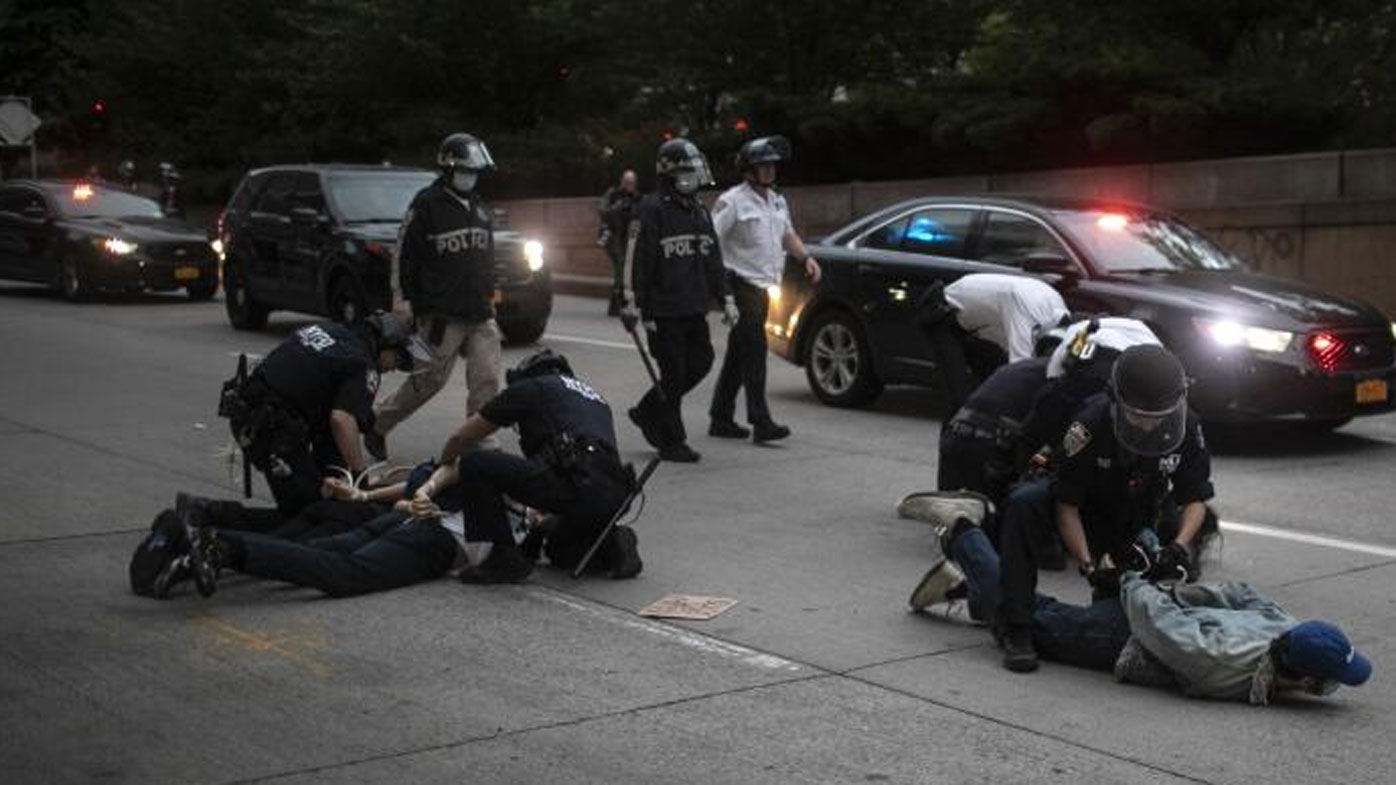 In some locations, officers started ordering people to move along, and began taking people into custody.

Demonstrators who had been on the West Side Highway in lower Manhattan were herded off, with parts of the roadway blocked off behind them.

"Something has to break, and it's not going to be us," Evan Kutcher said, one of hundreds of demonstrators who stood outside the Barclays Centre chanting Floyd's name last night.

"We're here because something needs to change.

"We hear Cuomo and de Blasio everyday saying what's happening is unacceptable but with no actionable plan from them." 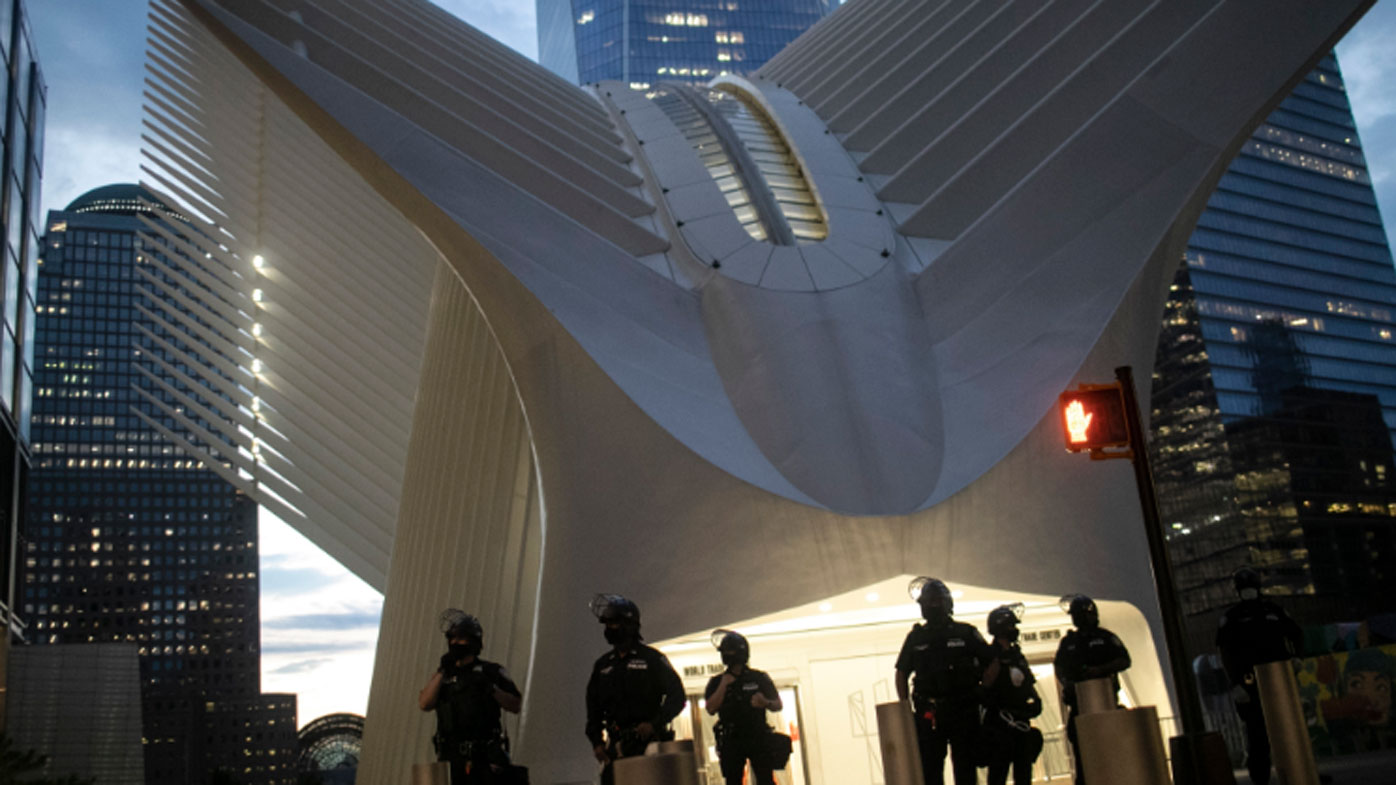 The police department announced it would not allow vehicle traffic south of 96th Street in Manhattan after curfew, though residents, essential workers, buses and truck deliveries were exempt.

"We're going to have a tough few days. We're going to beat it back," Mr de Blasio, a Democrat, said in announcing that the 8pm to 5am curfew would remain through Sunday.

Trump and Cuomo criticise the response

While Mr de Blasio insisted the city would put a stop to the violence and vandalism that have marred largely peaceful mass demonstrations surrounding Floyd's death, both the Republican president and the Democratic governor laid into the city's handling of the mayhem thus far.

"The NYPD and the mayor did not do their job last night," Governor of New York Andrew Cuomo said at a briefing in Albany.

"Look at the videos. It was a disgrace." 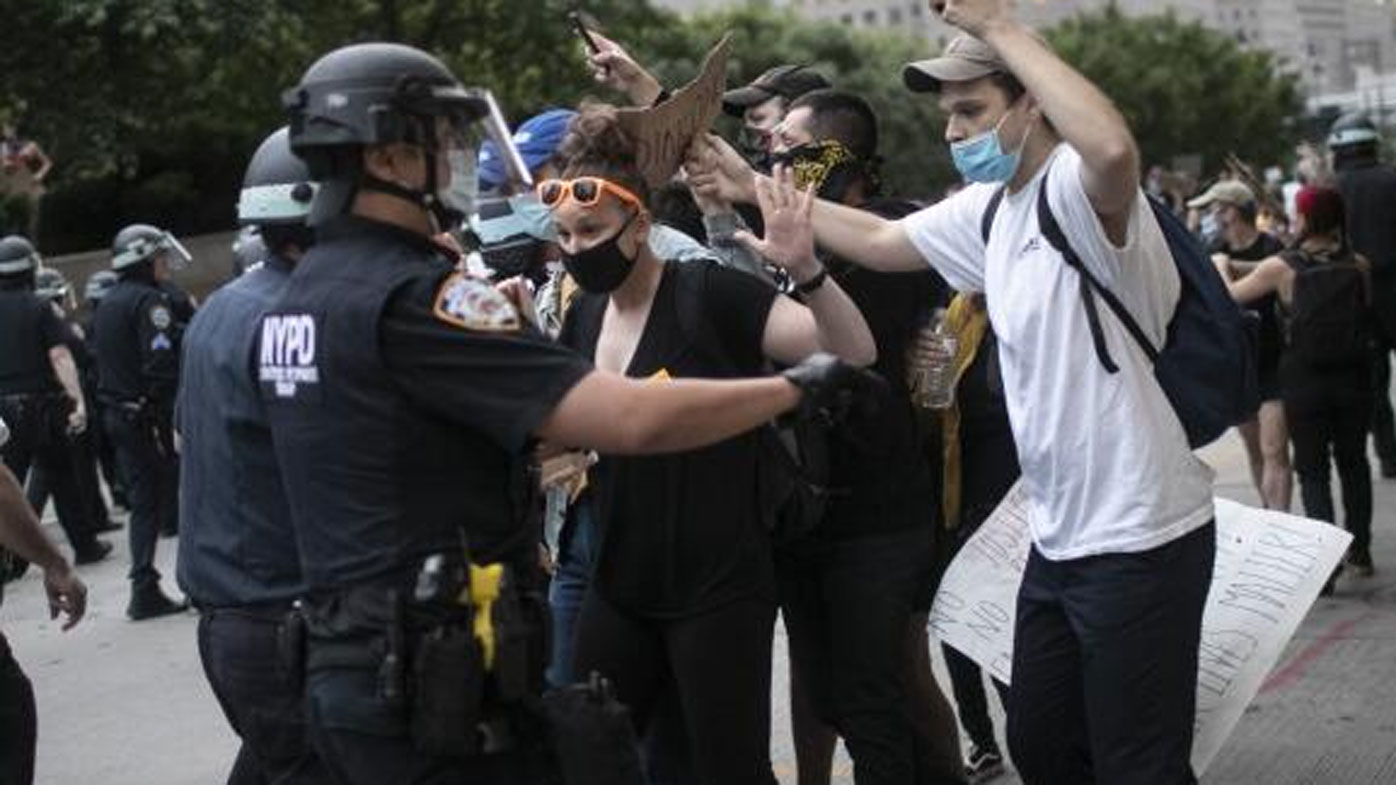 He said the mayor was underestimating the problem and the nation's largest police force wasn't deployed in sufficient numbers, though the city had said it doubled the usual police presence.

Officers are "giving their blood to keep this city safe," he told the New York Post, adding that he'd been hit by a bike and bloodied himself while arresting suspects Monday night.

Mr Cuomo's spokesman Richard Azzopardi later said the governor "has respect and confidence in the NYPD" and felt the mayor should put more officers on the streets.

Unprompted, Mr Cuomo brought up the possibility of using his power as governor to replace the mayor and deploy the National Guard over Mr de Blasio's objections, then immediately shot down the idea as legally impractical and unnecessary.

On Twitter, Trump urged a 7pm curfew and National Guard deployment in his native city.

"The lowlifes and losers are ripping you apart. Act fast!" he wrote.

But Mr de Blasio said the NYPD was "best equipped" to handle the lawbreaking, arguing that bringing in the National Guard risked fuelling worse conflict in a city on edge.

"We will regret it if we bring outside armed forces," he said.

"When you bring in people not trained for the circumstance but still with loaded weapons and put under horrible stress, really bad things happen."

The mayhem over the last four nights has clearly challenged the 36,000-officer police force, which has a reputation as a muscular, well-resourced agency that has driven down crime and faced down terror threats in the nation's biggest city. 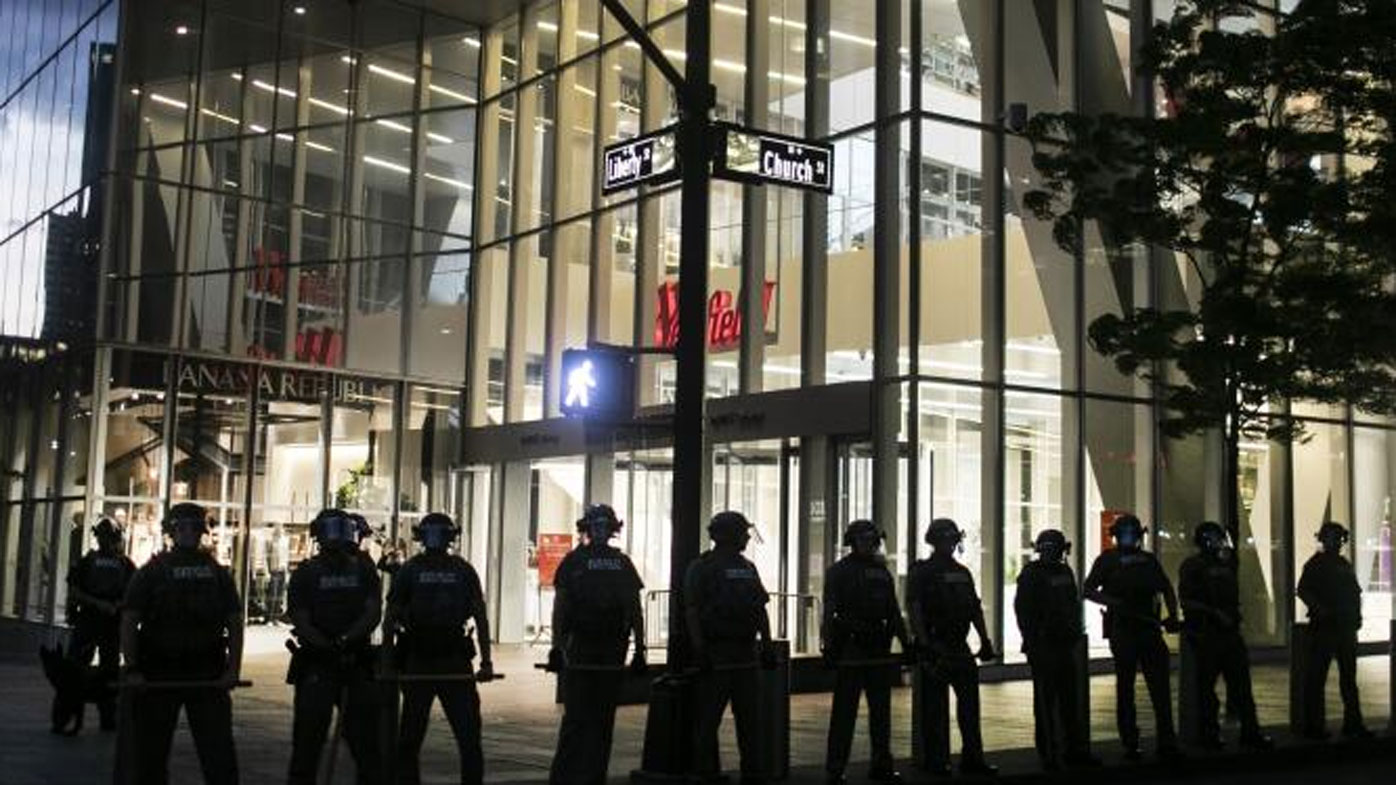 On Monday night and early Tuesday, police again struggled to keep up with, let alone get ahead of, roving groups of people bashing their way into shops, including Macy's flagship Manhattan store.

Nearly 700 people were arrested overnight, and several officers were injured.

A sergeant was struck by a hit-and-run driver in the Bronx and was hospitalized in serious but stable condition, police said.

Video also showed a group of people hitting a police officer with pieces of wreckage until he pulled his gun and they ran.