An advert for a mattress has been banned amid concerns it could cause serious offence amid the coronavirus outbreak. The regional press ad for Vic Smith Beds, seen in the Enfield and Haringey Independent paper on 12 February, included a cartoon im… 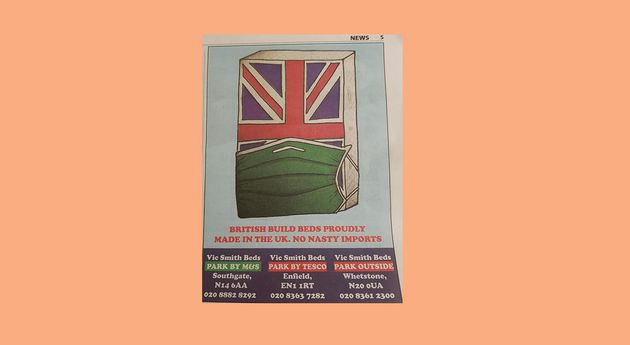 An advert for a mattress has been banned amid concerns it could cause serious offence amid the coronavirus outbreak.

The regional press ad for Vic Smith Beds, seen in the Enfield and Haringey Independent paper on 12 February, included a cartoon image of a mattress, with a Union Jack on the front. The mattress was wearing a green surgical mask above the words: “British build beds proudly made in the UK. No nasty imports.”

People complained the ad was likely to cause offence by linking concerns about the ongoing coronavirus health emergency to nationality and/or race. The Advertising Standards Authority (ASA) upheld the complaint, given the ad was seen “in the context of widespread news coverage of a major outbreak of Covid-19, in China”.

“News outlets had also reported some groups being physically and verbally targeted because of their nationality and/or race in relation to fears about coronavirus,” it said. “The ASA understood that, in particular, a number of Asian people had reported receiving abuse as a result of wearing face masks.”

The ASA considered the phrase “no nasty imports” – in combination with the image of the surgical mask – was likely to be taken as a reference to the coronavirus outbreak.

“We considered that in combination with the image, the reference to ‘nasty imports’ was likely to be read as a negative reference to immigration or race, and in particular as associating immigrants with disease,” they added. “We therefore concluded that the ad was likely to cause serious and widespread offence.”

Vic Smith Beds said it hadn’t been their intention to cause offence, and that its customer base was a multi-ethnic mix, so it wouldn’t have made sense to offend its customers. The store also said it had run the ad past its multi-cultural workforce, without any issues being raised. The idea was based on “customers having suggested they should advertise the fact that their beds were British-made”, they said.

The store said its beds had been made in the UK rather than “sitting in a damp container sent from China”. The ad was intended to refer to mould spores that could develop in those conditions and the smells given off from chemicals from damp rolled mattresses.

The Enfield and Haringey Independent said they would not publish the ad in future.