In early May, doctors in India began raising the alarm about a rise in mucormycosis – a rare and potentially deadly infection also known as black fungus.

In early May, doctors in India began raising the alarm about a rise in mucormycosis - a rare and potentially deadly infection also known as black fungus.

Many of those being infected are coronavirus patients, or those who have recently recovered from COVID-19, whose immune systems have been weakened by the virus or who have underlying conditions - most notably diabetes.

In the past few weeks, thousands of black fungus cases have been reported across the country, with hundreds hospitalised and at least 90 dead. Two states have declared it an epidemic, and the central government has made it a notifiable disease.

Here's what we know about black fungus and its spread in India.

How do you get it, and what are the symptoms?

Black fungus is caused by mould found in damp environments like soil or compost, and can attack the respiratory tract.

It is not contagious and does not spread from person to person.

Several types of fungi can cause the disease. These fungi aren't harmful to most people, but can cause serious infections among those with weakened immune systems, according to the United States Centres for Disease Control and Prevention (CDC).

Black fungus commonly affects the sinuses or lungs after a person inhales fungal spores in the air, and can also affect the skin following a surface injury like a cut or burn.

Symptoms depend on where in the body the fungus is growing, but can include facial swelling, fever, skin ulcers and black lesions in the mouth.

The disease "begins to manifest as skin infection in the air pockets located behind our forehead, nose, cheekbones, and in between the eyes and teeth," the Indian Health Ministry said in a statement on May 14.

"It then spreads to eyes, lungs and can even spread to the brain. It leads to blackening or discolouration over the nose, blurred or double vision, chest pain, breathing difficulties and coughing of blood."

"One of the ways mucormycosis travels is by invading the blood vessels," Dr Hemant Thacker, consultant physician and cardiometabolic specialist at Breach Candy Hospital in Mumbai, said.

"It compromises the circulation to the distal organ, and thus produces what is called as necrosis or death of tissue, which then becomes black. So it is then given the name black fungus."

In the most severe cases, the infection "goes through the blood vessels into the brain," potentially causing loss of eyesight or creating a "gaping hole" in the face, he added.

"If not controlled, not treated, it can have a mortality (rate) of anything from 20 per cent to 50 per cent."

The mortality rate also depends on the type of fungus involved and which part of the body is affected. For instance, it's less deadly for people with sinus infections, but more deadly for those with lung infections.

Immunocompromised people are more susceptible to infection - including COVID-19 patients, diabetic patients, people who take steroids, and those with other comorbidities like cancer or organ transplants, said the Indian Health Ministry.

COVID patients are particularly susceptible because not only does the virus affect their immune system - treatment drugs can also suppress their immune response.

"Due to these factors, COVID-19 patients face a renewed risk of failing the battle against attacks mounted by organisms such as mucormycetes," the ministry said, referring to the fungi that cause mucormycosis.

COVID patients undergoing oxygen therapy in ICUs may have humidifiers in the ward - which can raise their exposure to moisture, and make them more prone to fungal infection, the ministry said.

"The fungus takes the window of opportunity, invades the body," Dr Thacker said.

The ministry cautioned "this does not mean that every COVID patient will get infected by Mucormycosis," as it's uncommon among those without diabetes.

According to India's official National Health Portal, the prevalence of diabetes in the country is as high as 12 per cent to 18 per cent of the adult population, especially in urban areas.

"India is the diabetic capital of the world," Dr Thacker said.

"We have tropical climates where the fungus festers. So all this has led to the black fungus epidemic."

READ:  Understanding your rights as an employee in the age of coronavirus

How do you treat it?

Black fungus is treated with antifungal medicines, often given intravenously, according to the CDC. The most common medicines include Amphotericin B - a drug currently being used in Indian states to combat the outbreak.

Patients may need up to six weeks of anti-fungal medicine to recover. Their recovery depends on how early the disease was diagnosed and treated.

Often, surgery is required to cut away dead or infected tissue.

"In some patients, this may result in loss of upper jaw or sometimes even the eye," the Indian Health Ministry said in its statement.

Demand is rising in India for Amphotericin B - but it's in short supply, as hospitals had not anticipated the number of cases.

Bhavya Reddy, a resident in India's southern Telangana state, said her father was diagnosed with black fungus on April 26 - just as he was recovering from COVID-19.

"When the swelling did not reduce, (doctors) told us to get the injection."

The hospital did not have supply of Amphotericin B, and she had to appeal to the state's chief minister to receive vials of the drug, she said.

Once the medicine was secured, her father underwent an endoscopic sinus surgery to relieve the swelling.

Mansukh Mandaviya, a junior minister of the Ministry of Chemicals and Fertilisers, tweeted on Thursday adding that five companies have been approved to produce the drug in India, in addition to an existing six.

How common is it?

The disease is globally distributed, and generally pretty rare - though it can be hard to place exact estimates of its prevalence due to lack of comprehensive surveillance and data.

In the US, laboratory surveillance in the San Fancisco Bay Area between 1992 to 1993 suggested an annual rate of 1.7 cases per million people, according to the CDC.

However, the disease appears to be more common in India - one study by Indian microbiologists, published in March in the journal Microorganisms, suggested black fungus is 70 times more prevalent in India than in global data.

There are several possible reasons why - there is a higher rate of "uncontrolled diabetes" in India, said the study.

Many patients they studied didn't even know they had diabetes until they were diagnosed with black fungus, demonstrating "the lack of regular health check-ups in the Indian population," said the study.

The black fungus mortality rate in India is also "considerably high due to delays in seeking medical attention and diagnosing the disease, and challenges in managing the advanced stage of infection," said the study.

The country's climate is also a factor, Dr Thacker said.

"This fungus can grow on the side of a bread that is kept outside," he said.

"It can grow anywhere in the form of a mold, but in tropical countries with the humidity ... it tends to fester."

The current outbreak could also be because "we are in summertime, it's hot, it's humid," he added.

"Everybody knows that fungus infection festers in these kinds of climes."

Where has it been reported?

More than 3200 black fungus cases have so far been recorded across the five states of Maharashtra, Madhya Pradesh, Haryana, Telangana and Gujarat.

Maharashtra has the highest number, with more than 2000 cases reported and 800 hospitalised. At least 90 people have died of the disease in the state.

Gujarat has reported at least 369 cases in just one hospital. 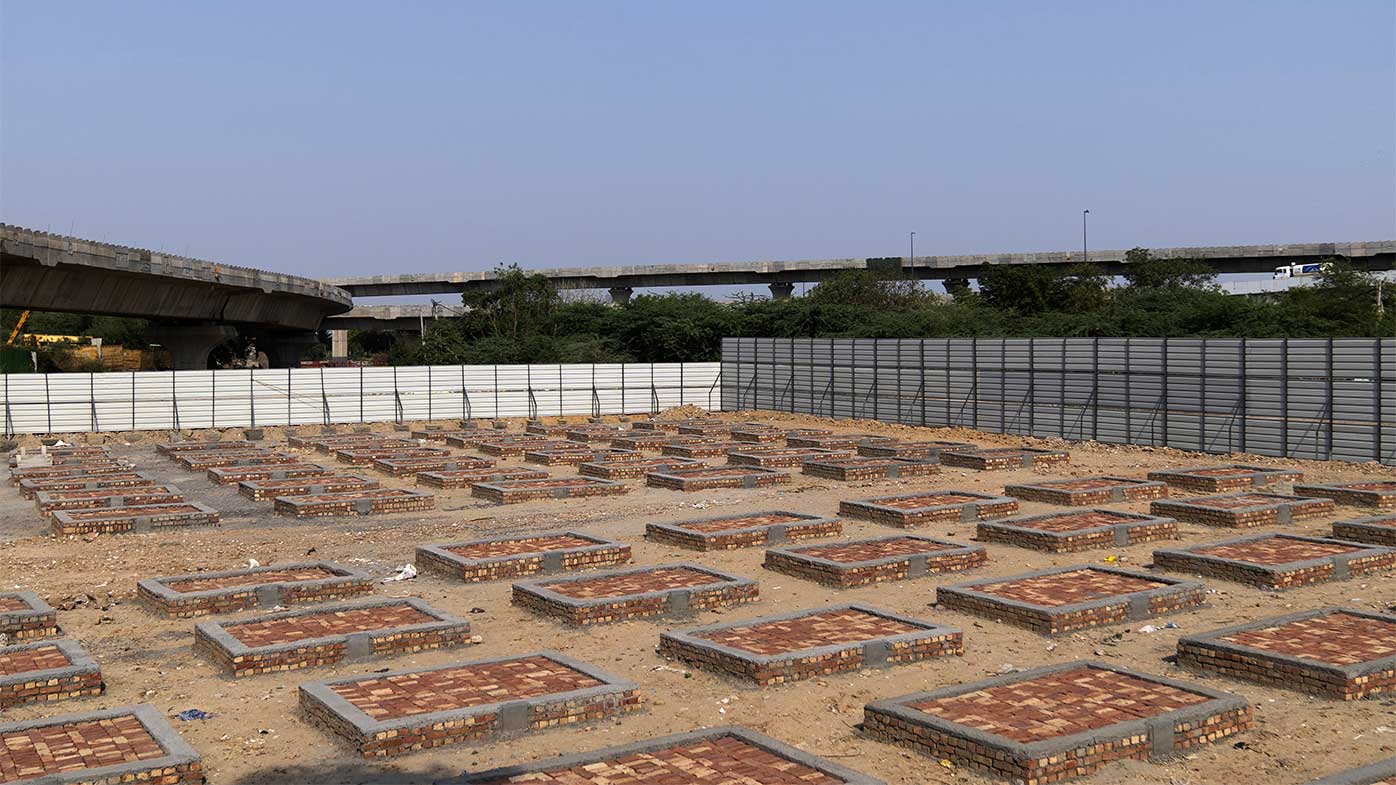 On Thursday, the central government classified mucormycosis as a notifiable disease, meaning all states and union territories have to report their cases to federal authorities.

"We now have a new challenge of black fungus, we need to be cautious and prepare for it," Indian Prime Minister Narendra Modi said on Friday.

At least seven states have declared black fungus a notifiable disease, in accordance with the central government's advisory to collect data, according to respective state government authorities.

"These cases are being found in patients who have recovered from COVID, so there are a number of complications," said JV Modi, medical superintendent at Gujarat's Ahmedabad Civil Hospital.

He added the hospital has seen a rise of cases in the past 10 days, as the country appeared to pass the peak of its second coronavirus wave.