Boober Eats! No one has jumped on the “from necessity comes creativity” train sparked by the coronavirus outbreak in a more wonderfully weird way than Portland, Oregon, strip club owner Shon Boulden.As government mandates have brought …

No one has jumped on the “from necessity comes creativity” train sparked by the coronavirus outbreak in a more wonderfully weird way than Portland, Oregon, strip club owner Shon Boulden.

As government mandates have brought businesses like Boulden’s to a screeching halt, he has come up with a way to raise spirits in the community and ensure his employees maintain some income: having dancers make food deliveries from the bar’s kitchen.

And it all started as a joke one night at Lucky Devil Lounge, one of his two clubs.

“We were cracking jokes like we do every night, coming up with funny alternate Uber names,” Boulden told HuffPost on the phone Monday, referring to the popular ride-hailing service. “Things like Doober for weed delivery, Luber to deliver lube. Then I was like, ‘Boober, when a topless girl picks you up and takes you to a strip club.’”

When Oregon Governor Kate Brown ordered the closure of bars and restaurants save for takeout and delivery on March 16 in order to hopefully stop the spread of COVID-19 in the state, Boulden took an adapted version of that joke to Twitter.

Working on keeping our kitchen open for food deliveries and our staff employed. Dancers will be delivering the food orders topless to your doorstep. Calling it Boober© #boober#luckydevillounge

“That joke turned into a reality overnight, with people hitting us back up, saying, ‘Oh my god, when is this available?’ and ‘I love this idea!’” Boulden said. There were even requests from towns more than 30 miles outside of Portland. That’s when Boulden knew he might actually be on to something.

“I was like, fuck, I gotta try to figure this out,” he said, laughing. “I started texting everyone, posting on our community page asking if anyone was interested.”

Between Boulden’s two clubs, he employs more than 100 people: dancers, a security team, chefs and bartenders. Boober Eats, a play on food delivery service Uber Eats, became an all-hands-on-deck situation for anyone interested in participating ― and fast, with the dancers, two at a time, delivering the food wearing cute outfits and pasties. 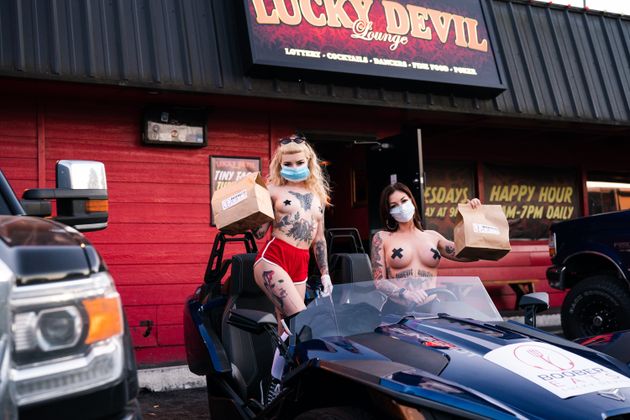 The dancers are driven to deliver meals by a member of the strip club’s security team to ensure their safety. Brodie, one dancer-turned-delivery-staff-member, told HuffPost that every possible measure is being taken to stop the spread of the virus, both when employees report to work and when they make their deliveries. Lucky Devil Lounge is adhering to surface sanitization as well as social distancing guidelines in the bar.

“We have to send a photo of our temperature to our boss before we show up,” she said. “We’re constantly washing hands, wearing gloves and masks. We’re not allowed into the kitchen or the bar. After every delivery, we throw our gloves in the trash and put on new ones. When we deliver, we knock, stand back and let [the customer] come out. If they want a photo that’s fine, but they have to stand either six feet in front of or behind us.”

There are roughly 30 dancers and eight security guards currently working to make Boober a success, in addition to the staff on site cooking meals and posting to social media about the new business.

As many dancers, who work as independent contractors, have now been forced to rely on internet content platforms to bring in cash, this has provided a bit of a relief for employees.

“As soon as we closed down, I was freaking out,” Brodie said. “This is my primary source of income. When Shon started joking around and people started freaking out about it and we started going, we saw it’s keeping dancers employed and getting some income as well as the bouncers, the DJs, the cooks ― it’s keeping us all going.”

Brodie told HuffPost that while it’s not the same as making “stripper money,” the team has seen an increase of revenue each day as Boober becomes more popular and more people learn of its existence. Boulden said he’s ready for more even more customers.

“I’m just putting more and more of my employees to work,” he said. “The more it grows, the more I need people helping me return emails, doing social media. You can do the social media from home, so now I can also create jobs for people at home.”

But perhaps just as important to Boulden and his employees is the way they are supporting the community ― coming together even while keeping their distance. Both Brodie and Toxic, another dancer at Lucky Devil Lounge, said the deliveries have been positive, fun and uplifting.

“My co-workers and I are getting to know each other on a deeper level, making this different kind of human connection,” Toxic said. “We’re hearing stories from the people in our community ― a lot of people have been laid off, they don’t know what’s going to happen next. We’re getting to bring joy into their lives. Just being able to be there for our community and to be there for each other ― it’s been really rewarding.” 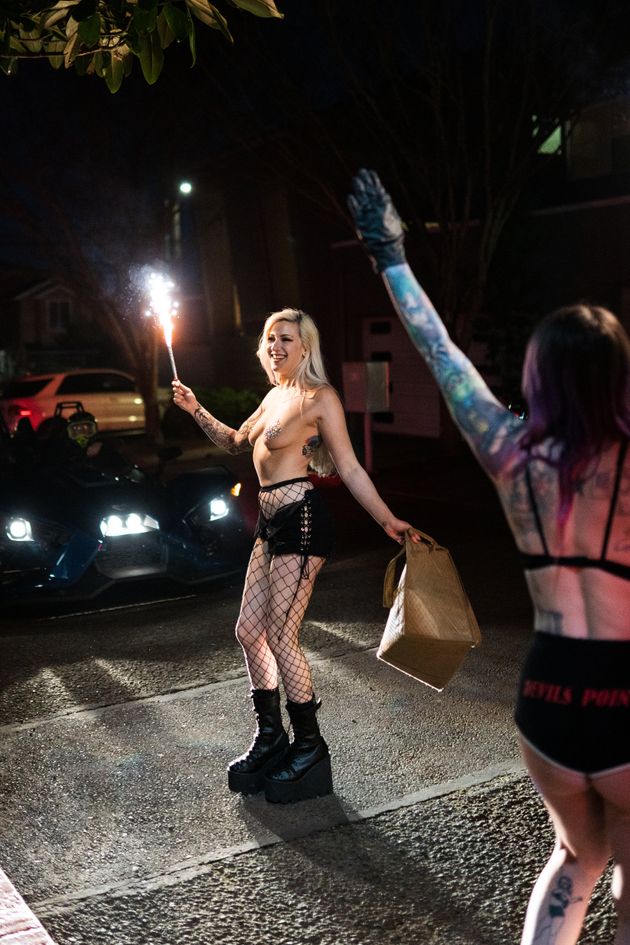 Toxic, who said the new business has also allowed her to continue her craft as a performance artist, hopes that when the dust settles, perhaps people will have a different, more positive attitude toward her community.

“We would like to change the whole idea about the strip clubs ― the stereotypes ― and for people to show more respect toward the stripper ― the sex worker ― community,” she said. “A lot of people don’t see strippers as people. I would like to see more positivity toward and support around our industry.”

As for the future of Boober Eats? Toxic has a few ideas.

“I want to pitch to Shon at some point something called ‘Boober Deluxe,’ which ― after quarantine when we don’t have social distancing rules ― we show up in a limo, stripparoke, delivery, dinner and babes. It would be so fun.”

Head to the Lucky Devil Lounge website to learn more.