Grammy snubs be damned, The Weeknd’s blockbuster Super Bowl halftime show felt like it was gunning for an Oscar. Ahead of the big game, the R&B hitmaker teased that he would transform the Super Bowl LV halftime performance into a &ldquo…

Grammy snubs be damned, The Weeknd’s blockbuster Super Bowl halftime show felt like it was gunning for an Oscar.

Ahead of the big game, the R&B hitmaker teased that he would transform the Super Bowl LV halftime performance into a “cinematic experience,” and so he did when he took the stage at the Raymond James Stadium in Tampa, Florida, on Sunday night.

Weaving together storylines of the past year from his hit singles and live performances from his album “After Hours,” The Weeknd showcased his hallmark seductive vocals and delivered a high-concept journey into the dark, moody world that has defined his most recent release. 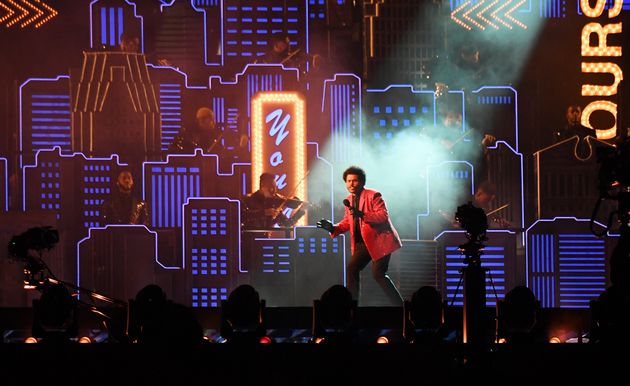 The singer, whose real name is Abel Tesfaye, first appeared seated in a convertible, rocking his signature red suit and sunglasses against a neon-colored re-creation of the Las Vegas skyline.

Before long, he was joined by a wall of choir and orchestra members to perform his 2016 Daft Punk collaboration “Starboy.” Then, he launched into a trippy rendition of “Can’t Feel My Face,” singing directly to the camera, as bandaged versions of himself feverishly danced around him in a mirrored hallway.

The Weeknd revealed last week that the look is meant to reflect the “absurd culture of Hollywood celebrity and people manipulating themselves for superficial reasons to please and be validated,” adding that in his eyes, “being attractive isn’t important to me but a compelling narrative is.”

The 30-year-old Canadian pop star then featured selections from his catalogue, including renditions of “The Hills,” “I Feel It Coming” and his “Fifty Shades of Grey” track, “Earned It,” which culminated with a major fireworks show.

Breaking with halftime shows in recent years that featured a slew of special guests ― last year’s performers Jennifer Lopez and Shakira shared the stage with Bad Bunny and J Balvin ― the singer went completely solo for the entirety of his time onstage, except for an array of backup dancers and singers.

Due to the strict coronavirus protocols and limited number of fans at the game, for the first time in the event’s 55-year history, he primarily performed on a constructed platform in the stadium stands that stretched out onto the field.

But eventually, The Weeknd and his bandaged dopplegangers, dancing in unison with lights affixed to their hands, spilled out onto the stadium’s field and brought the set home with a pyrotechnic-heavy version of “Blinding Lights.”

Over the past year since his album was released, The Weeknd has been developing a high-concept plot line beginning with a Vegas night gone awry that’s “hit heightened levels of danger and absurdity as his tale goes on.”

“It’s a very cohesive story I’ve been telling throughout this era ... and so the story will continue, but definitely we’ll keep it PG for the families,” he said in a press conference before the game.

The big game serves as the story’s closing chapter, so the performer pulled out all the stops, investing $7 million of his own money in the production budget to make sure it would be as elaborate as he had envisioned. 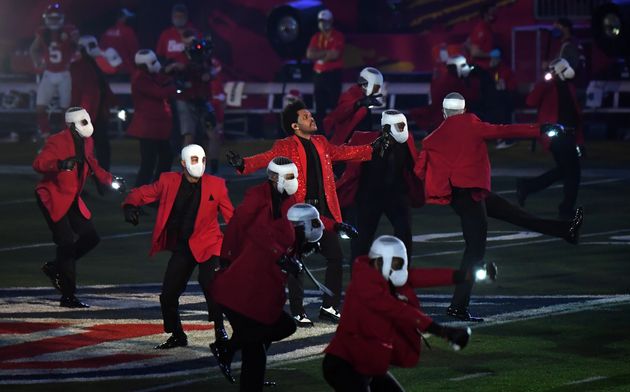 The halftime show is the second curated by Jay-Z’s Roc Nation entertainment company, making The Weeknd the first Black artist to headline the Super Bowl since the rap entrepreneur joined forces with the NFL in 2019. The partnership, which was envisioned to attract high-profile performers and strengthen the league’s social justice outreach, came under significant scrutiny at the time, as it was perceived by many as a betrayal by Jay-Z of Colin Kaepernick and other players protesting police brutality.

While The Weeknd said he prefers not to “spoon-feed the audience” when it comes to the messages behind his performance, he’s been vocal about his support for social justice causes in recent months. After sharing receipts of his contributions totaling $500,000 to Black Lives Matter, National Bailout, and Colin Kaepernick’s Know Your Rights Camp on his Instagram in June, he donated $300,000 to Global Aid for Lebanon following the deadly explosion in Beirut and $1 million to coronavirus relief later that month.

“I see that people are struggling and I just wanna help,” he told reporters this week about his recent charitable efforts. “I’ve been in that position myself and I know what it feels like. I never really had money growing up, so giving away isn’t hard for me, it’s very easy.”