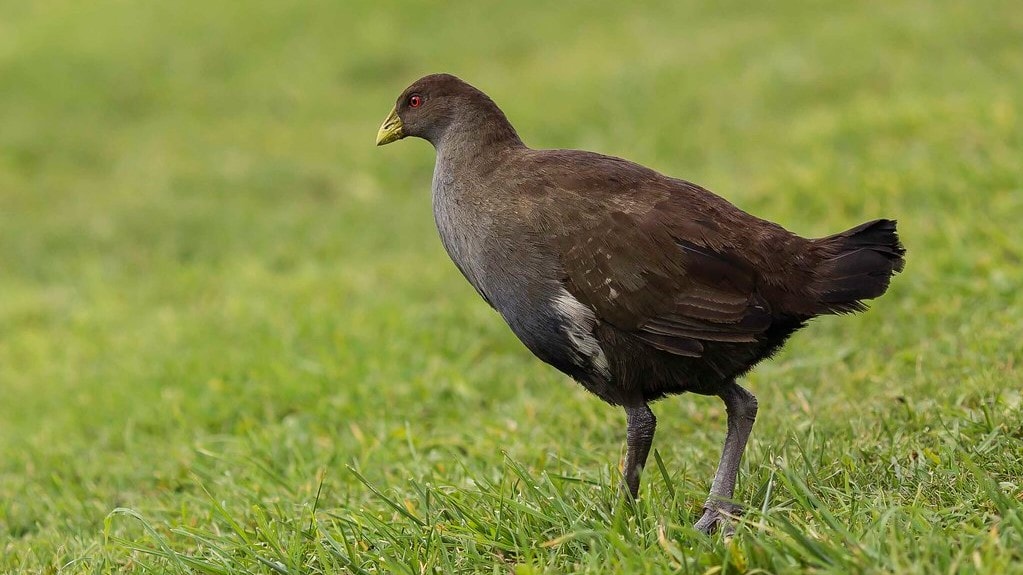 Tasmania’s native hen (Tribonyx mortierii) is one of twelve species of birds found only in Tasmania. The mortierii part of the name is in honour of noted Belgian botanist Barthélemy Charles Joseph Dumortier. They’re often called ‘turbo chooks’, even though they have no relationship to domestic chickens. Other names include narkie, waterhen and the Aboriginal term […]

Tasmania’s native hen (Tribonyx mortierii) is one of twelve species of birds found only in Tasmania. The mortierii part of the name is in honour of noted Belgian botanist Barthélemy Charles Joseph Dumortier.

They’re often called ‘turbo chooks’, even though they have no relationship to domestic chickens. Other names include narkie, waterhen and the Aboriginal term trayapana – according to place names information – from which the town of Triabunna takes its moniker. The Tasmanian Aboriginal Centre lists piyura kitina as a term for little native hen, also the name for Risdon Cove. You can listen to the pronunciation here.

Native hens are large, heavy-bodied, flightless rails. Adults measure between 43 and 51 centimetres (17 and 20 inches) in length.

They have large yellow bills, red eyes, brown heads, and back wings. They’re slate grey on their underparts. Their tails are long and narrow. They’re powerful in their legs, which are grey in colour.

Baby hens are similar to adult ones, but are duller.

Native hens are similar in general shape and colouration to black-tailed native hens (Tribonyx ventralis). The only other species in the genus Tribonyx, Hodgens’s waterhen, is extinct and known only from fossil material in New Zealand.

They’re frequently seen in most parts of Tasmania except the south-west. They are also not found on the Bass Strait islands.

A native hen’s diet consists of:

They eat during the day, and usually forage on the ground. 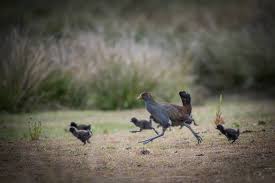 An adult with chicks.

The birds breed once a year, sometimes twice if there’s a high availability of food. The breeding structure is usually polyandrous, but can also be monogamous or polygamous.

Both sexes take part in nest-building, incubating, and tending to the chicks. The nests (rough, flattened grass mattresses) are usually built close to water, or on damp ground.

Eggs are usually laid between August and November, but this can vary depending on seasonal conditions. The eggs measure around 56 by 38 millimetres (2.2 by 1.5 inches).  They’re either a dull yellow or buff-to-brown colour with some spotting of reddish brown and lavender.

A recent video published by the University of Tasmania has shown that Tasmanian devils are able to crack open the eggs and eat them, a previously unknown behaviour.

The eggs hatch after a 22-day incubation period. Chicks are fed by their parents in decreasing amounts for up to 8 weeks.

The social organisation of native hens has been studied extensively.

They live in groups of between two and five. The young from the previous breeding season tend to stay with the group for approximately one year until they leave to establish their own territories.

Native hens have fourteen separate calls that range from low grunts to high-pitched alarms. They can also perform see-sawing duets that rise to screeching notes.

They can run very quickly. They’ve been recorded running at speeds up to 48 kilometres per hour (30 miles per hour). 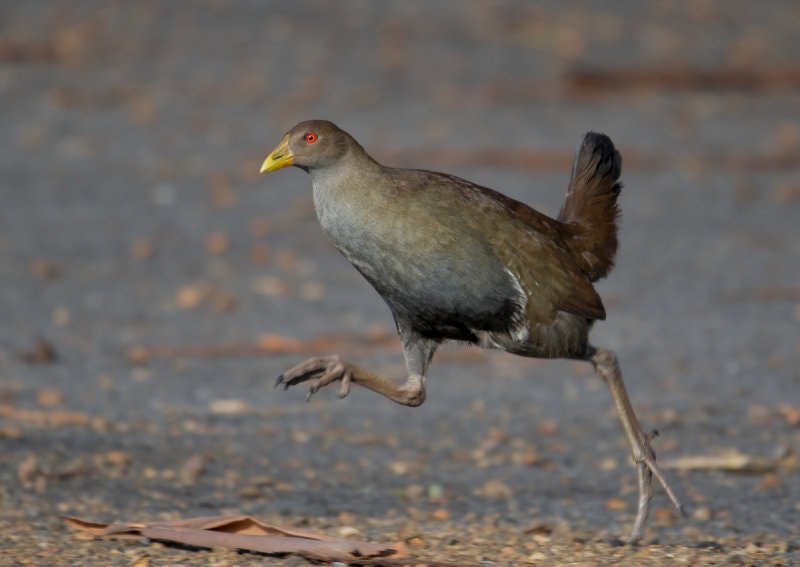 The Tasmanian native hen is currently classified as a species of least concern by the International Union for Conservation of Nature. The birds are protected.