Since the COVID-19 outbreak began, health experts have emphasised how important it is to wash your hands, disinfect surfaces and cough into your arm or sleeve. But it’s hard to avoid all methods of transmission, so much so that the vast majority …

Since the COVID-19 outbreak began, health experts have emphasised how important it is to wash your hands, disinfect surfaces and cough into your arm or sleeve. But it’s hard to avoid all methods of transmission, so much so that the vast majority of people around the world are taking lockdown, quarantine or social distancing measures.

That said, most of us will have to leave the house at some point during this outbreak ― to go to the pharmacy, the grocery store or the doctor, for example. So where, then, can you pick up the virus?

According to new research published in The New England Journal of Medicine, scientists were able to show that aerosolised (that is, airborne) particles could spread the novel coronavirus. This means there’s possible airborne transmission of the illness, at least in certain settings.

Does “respiratory droplet” sound a lot like “aerosolised particle”? If you’ve heard both terms tossed around, here’s the difference and a breakdown of what mode of transmission is the most contagious.

Particle vs. droplet: Which is more infectious? 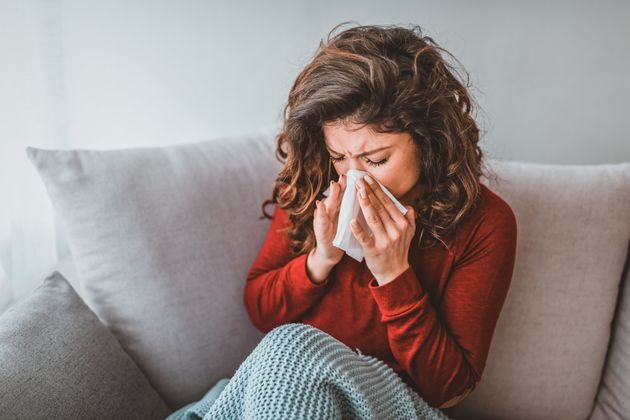 Aerosolised particles are not the same as respiratory droplets. They are much smaller, basically microscopic, said S. Wesley Long, medical director of diagnostic microbiology at Houston Methodist Hospital. (Fog is a good example of an aerosolised particle.)

Such particles linger in the air. “They can travel long distances and can be easily breathed into the lungs,” Long said. “Respiratory droplets tend to be about 20 times bigger, and travel around six feet or less before dropping to the ground.”

You will probably only encounter aerosolised particles in certain conditions, and there’s likely a very low risk of infection via aerosols for the average person. But, as the study shows, they are “concerning” because they can stay suspended in the air for several hours, said Jennifer Hanrahan, an associate professor of medicine and chief of infectious diseases at the University of Toledo.

These particles are a major reason medical workers are at high risk. Hanrahan said “aerosolising procedures,” like intubation, can cause these particles to spread.

According to Kirsten Hokeness ― professor and chair of the department of science and technology at Bryant University and an expert in immunology, virology, microbiology and human health and disease ― other procedures that can produce aerosols are oxygen therapy, scoping procedures and CPR.

When fluids containing the virus, like saliva, blood or mucus, are disturbed during a procedure, they can “remain suspended in the air by hanging on to moisture droplets, dust” or other particles.

Once in the air, the particles can be dispersed by way of air currents from ventilation or fans, which help them move beyond their immediate space, Hokeness said.

“In addition to air circulation, human activities such as walking and door opening can also further facilitate [particle] travel,” she said.

Respiratory droplets, on the other hand, aremuch larger, and they land quickly after being dispelled from an infected person.

“The difference is that, in respiratory transmission, the virus is kind of enclosed in a droplet,” Hokeness said. “They are produced when you cough or you sneeze and the droplets carry the particles. They are limited in range. In order for someone to pick those up, they would have to be in close proximity, three to four feet, which is why we say six feet as a distancing measure.”

Which modes of transmission should we be most concerned about?

Is airborne transmission the most likely method of getting COVID-19? No. If that were the case, we’d be seeing much higher numbers of infected people, Hanrahan said. Measles, for instance, has airborne transmission. For every one person to get measles, they typically infect approximately 15 other people on average. COVID-19 appears to spread to roughly two to 2.5 people for every one person who is infected.

Plus, while the NEJM study showed COVID-19 can exist as an aerosol, a report from two hospitals in Wuhan, China, did not detect such particles in 35 air samples — a hopeful sign that this method of contracting the virus would be rare.

“We are still learning about COVID-19, but coronaviruses can live a few days on hard surfaces, and do well on skin,” Long said. “They do less well on porous surfaces like cardboard or fabric.”

The study in The New England Journal of Medicine examined how long the coronavirus lived in various contexts. As an aerosol gas, suspended in air, the virus could hang around for up to three hours. Respiratory droplets, as mentioned, tend to land quickly on surfaces.

“On plastic and stainless steel, the virus was viable for up to three days,” Hokeness said. “These seemed to be the longest [for] surfaces.” The virus seemed to disintegrate a little faster on stainless steel than on plastic (think of doorknobs, handles and kitchen surfaces).

The researchers found that the virus sticks around for much less time on copper ― about four hours.

“On cardboard, some virus was found for 24 hours,” Hokeness said. “Some people get concerned about delivery, but the likelihood of transmission is low.” Like Long, she noted that porous surfaces “don’t tend to lend themselves well to letting viruses live very long,” and suggested paper is also probably less likely to host the virus.

Hokeness said this is “really preliminary” evidence on how the virus can be spread, and “sometimes when you do studies in a lab, translation into the world” is not always perfect.

But these discussions are important, she said ― particularly when we’re trying to keep health care workers and the public safe. “We are learning everything in real time,” she noted.

How to stay safe and healthy It’s critical to remember that you can contract this virus just about anywhere; there are lots of places and means by which you can pick it up. This is why officials are asking everyone to stay home. “You have to think of every surface as being potentially contaminated,” Hanrahan said.

Whether a given surface is infected “depends on who walked by and coughed or sneezed,” which isn’t something you can know. And if someone did cough or sneeze, they may not even know they’re passing around the virus: Research has shown that “stealth transmission” among people who aren’t exhibiting obvious symptoms is a common source of spread.

“Get nonperishable goods, so that you don’t have to go out as often,” Hanrahan said. “When SARS was going on, we knew that people who washed their hands immediately upon arriving home were less likely to become sick than those who did not report doing that.”

Wash your hands for at least 20 seconds. Time yourself, because you might be surprised at how long 20 seconds is, Hanrahan said.

Those photos of packed beaches in Sydney? Irresponsible. By no means should you be in a crowd right now. It puts your own health and the public health at risk, Hanrahan said.

“As an infectious disease doctor, I’ve seen a lot of scary things, and this is really scary,” she said. “It is not like the flu. It is much worse than the flu.”

A HuffPost Guide to Coronavirus