Over 44 hellish minutes, on the morning of February 28, 1997, two bank robbers fired more than 1100 rounds at hopelessly outgunned police.

After one of the most intense gun battles in US police history, Los Angeles Police Department detective Tim Shaw dug out a quarter, found a payphone and called his wife.

Kathy Shaw, nine months pregnant and home with the couple's toddler, knew nothing about the violent standoff that just had unfolded on a sunny LA morning outside a Bank of America branch in North Hollywood.

Over 44 hellish minutes, on the morning of February 28, 1997, two bank robbers in body armour and sporting a military-grade arsenal fired more than 1100 rounds at hopelessly outgunned LAPD officers. 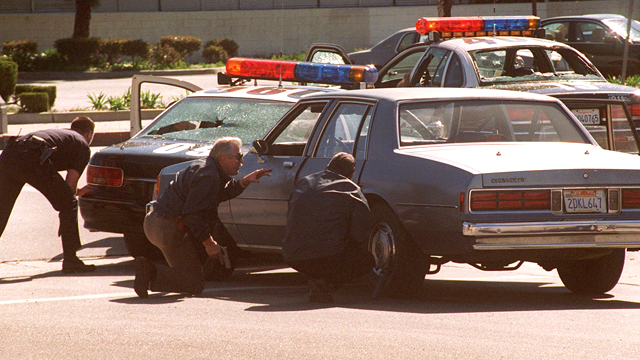 News choppers had live broadcast a shootout so audacious it belonged in the Warner Bros studio, some two kilometres away.

Eleven officers had been shot and wounded and eight civilians were injured. It was a dramatic day that would forever change policing in the United States.

But at their Santa Clarita home, Kathy was blissfully unaware.

"Kathy and my son Tyler had the TV on Nickelodeon. She was watching him watch cartoons. She had no idea," Det. Shaw told nine.com.au.

"My car ended up getting shot up," he said, recalling one of the LAPD's most challenging days. Afterwards, he was awarded the Police Meritorious Service Medal.

"I was hugging the kerb, trying to get as low as I could… at home my son was days away from turning two and my pregnant wife was due any moment.

"Luckily I came out of there unscathed."

Three days later, Kathy gave birth to a daughter, Alexa. In the 22 years since, he's watched Alexa graduate college and move into sports broadcasting with NBC.

"It's a miracle the only people who died that day were the two bad guys," Det. Shaw said. 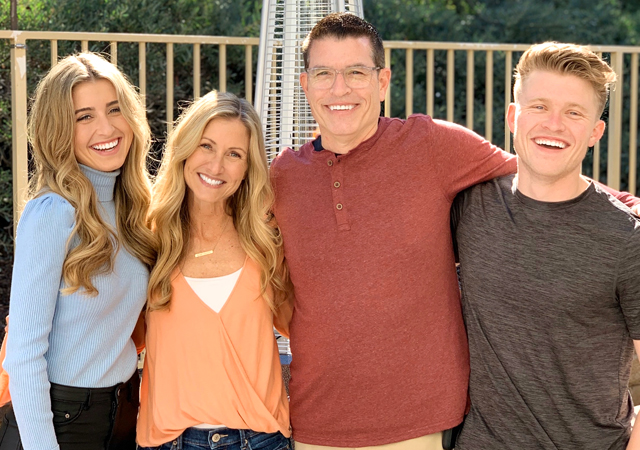 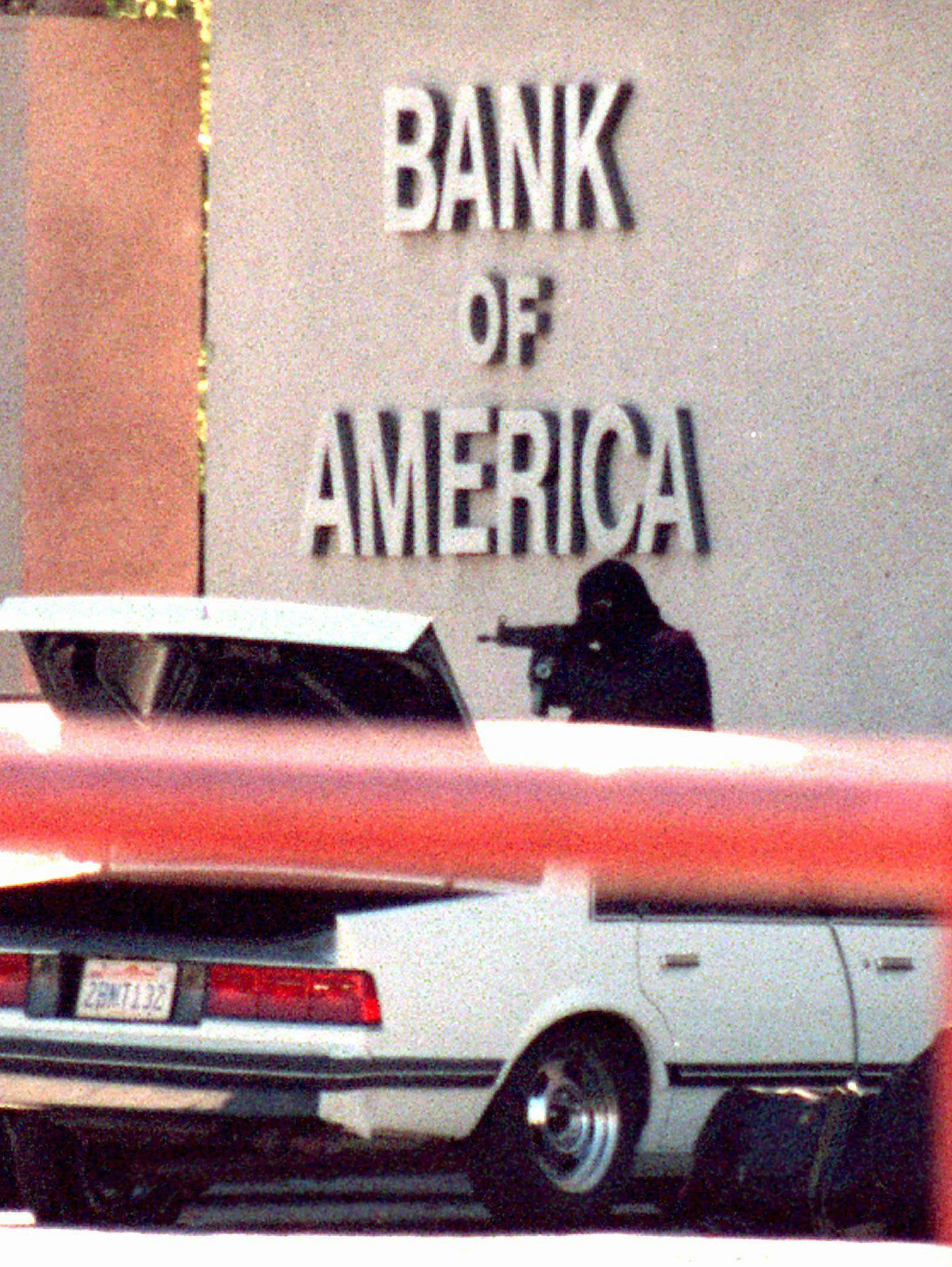 Invincible and armed to the teeth

At 9.16am, after months of preparation, the pair entered the North Hollywood Bank of America branch.

Armed to the teeth, they felt invincible.

Both men had popped anti-anxiety drugs and each wore homemade body armour fashioned out of bulletproof vests and metal plates, weighing 18 kilograms. LAPD bullets would soon be bouncing harmlessly off both perpetrators.

WARNING: Graphic image below may disturb

The AK-47s had been fitted with drum magazines, capable of holding more than 100 armour piercing rounds.

Each man carried hundreds of bullets, and there was more ammo stored in the pair's white 1987 Chevrolet Celebrity, parked outside the bank.

"We were so outgunned," Det. Shaw recalled.

At the time, LAPD officers carried only 9mm handguns and .38 calibre pistols. They had shotguns but high-impact slug shot wasn't standard.

After the North Hollywood shootout, law enforcement agencies across the US were issued high-powered rifles, now common in police cars.

"To be wearing that type of body armour, it seemed they were anticipating this kind of confrontation," Det. Shaw said.

"That's somewhat unusual. Most people want to get in and get out as quickly as possible." 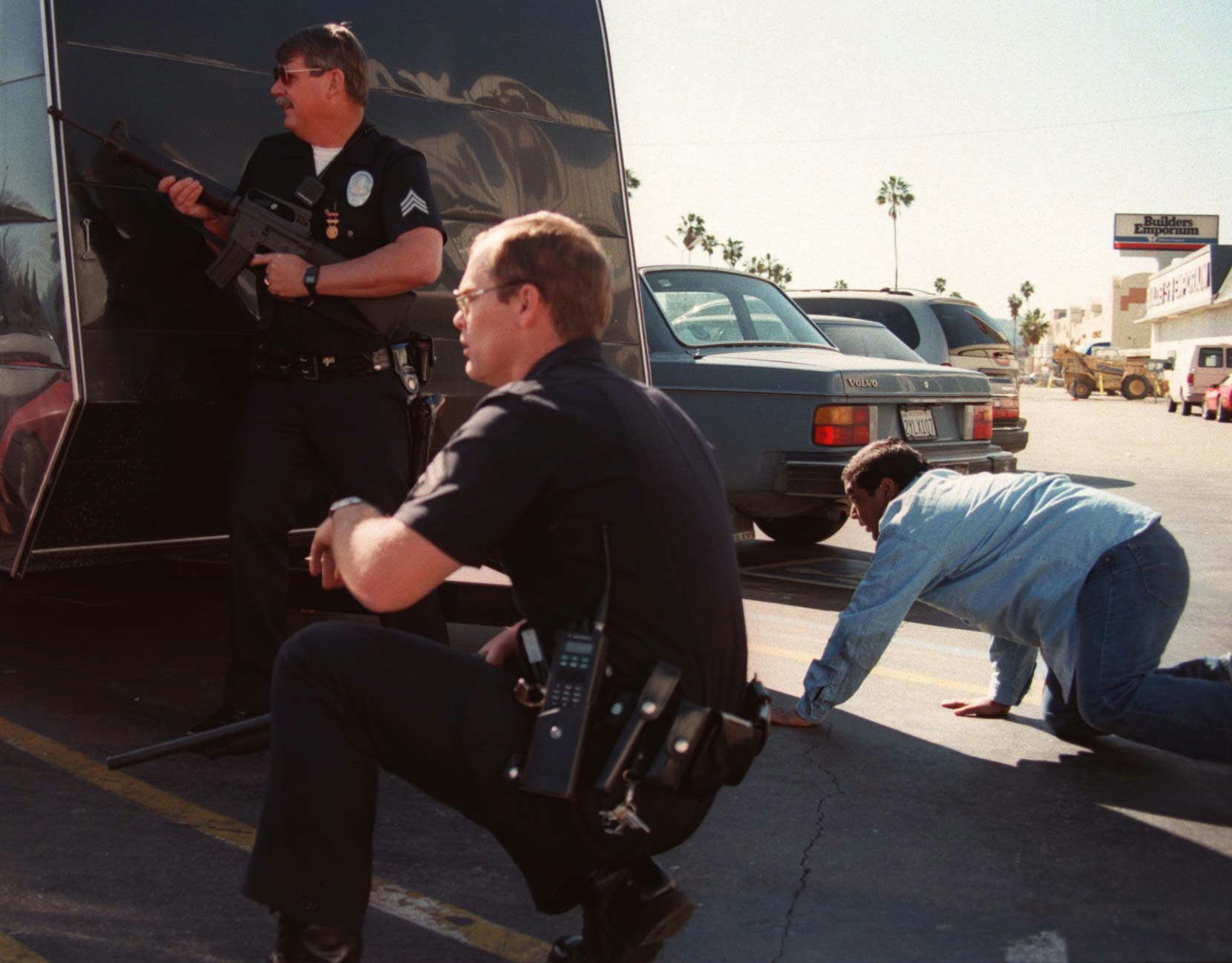 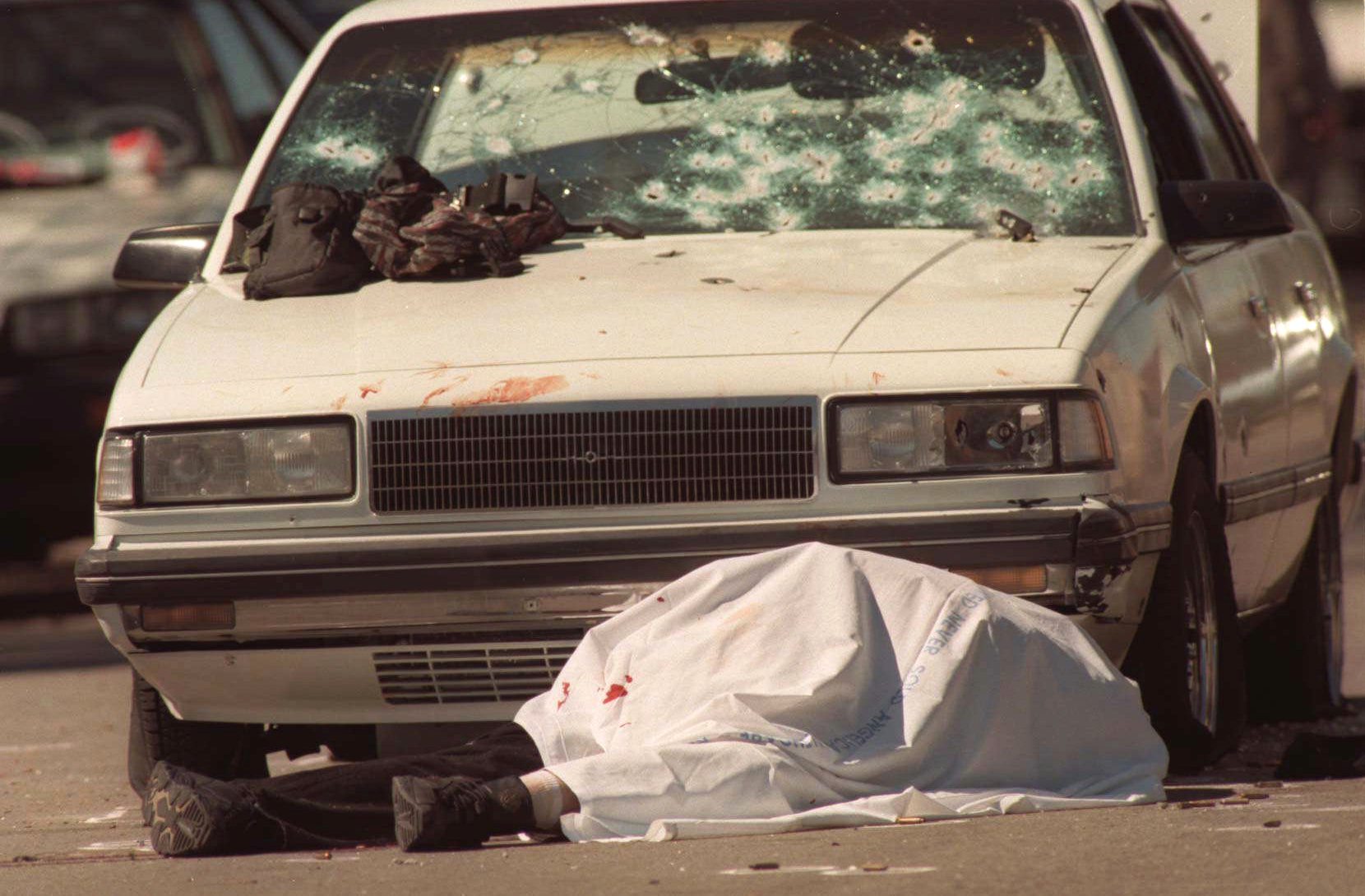 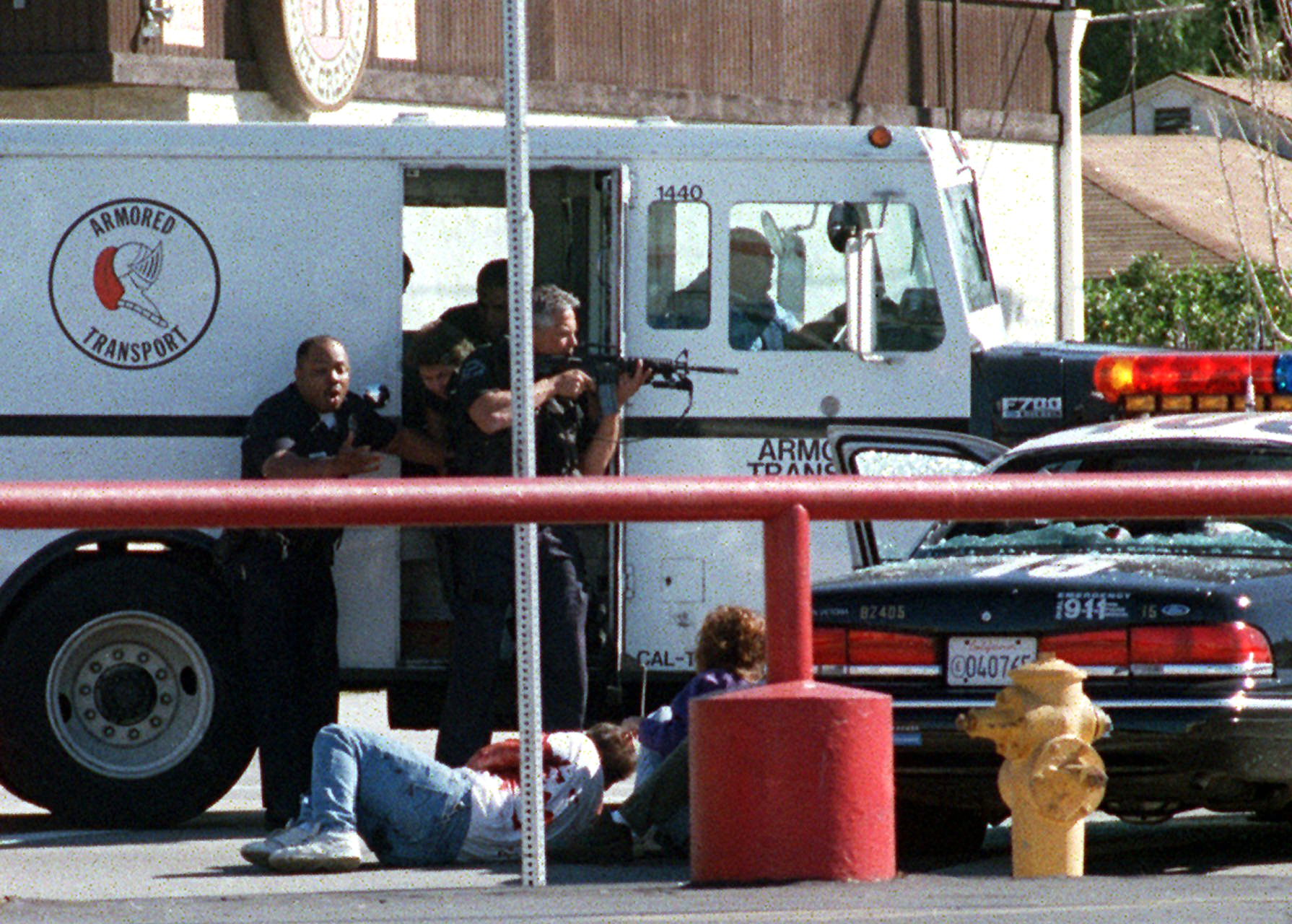 Phillips and Mătăsăreanu had successfully robbed several banks before taking on the Bank of America on Laurel Canyon Boulevard.

Each of those hits, which were under investigation by LAPD's Robbery Homicide division and the FBI, had gone off without a shot fired.

But this time an LAPD patrol unit cruising the neighbourhood spotted the two men walking into the bank, in their cumbersome suits and wielding rifles.

The officers watched as the men pushed customers waiting for the ATM inside the building. They radioed for backup.

Waiting for help, they heard a volley of shots ring out from inside the bank.

Phillips and Mătăsăreanu's plan had started to go off-plan.

After a spate of robberies, Bank of America had reduced the amount of cash held at the branch. The vault contained less than half of the $750,000 the two robbers were expecting.

In frustration, they fire dozens of rounds at the ATMs, hoping to score more loot from the machines.

Watches had been stitched into the wrists of their custom-made suits, so the robbers could track the eight minutes they believed they needed before the LAPD arrived.

But outside, several LAPD units already had the bank surrounded. Officers ducked behind their cars, drew their pistols and waited. They had no idea what they were facing. 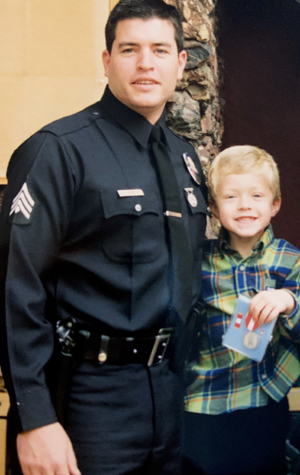 On the eight-minute mark, Phillips made his way to the door and spotted police. He sprayed fire relentlessly for several minutes, wounding seven officers and three civilians.

Det. Tim Shaw's patrol car was shot twice. He crawled along the kerb and went to the roof of a nearby building, firing 22 rounds at the robbers with his Beretta 9mm pistol.

Chaos rained as Phillips and Mătăsăreanu spewed machine gun fire at police officers shooting back with pistols. Police radio crackled with reports of "officer down". Phillips fired his AK-47 at an LAPD police chopper, forcing it into retreat.

"Even with their advantage of firepower and body armour, they were sunk at this point," Det. Shaw said.

"They weren't going to get away."

An LAPD SWAT team arrived 18 minutes after the shootout began. Carrying $300,000 in duffel bags, Phillips and Mătăsăreanu made it to their Chevrolet sedan, laying down cover fire as they moved.

Mătăsăreanu took the wheel while Phillips walked behind the slow moving car, peppering the police with bullets.

"It was one of the most difficult things you would ever face," Det. Shaw said.

"Even against the odds, the LAPD went toe-to-toe with these guys… it was a tremendous effort in heroism." 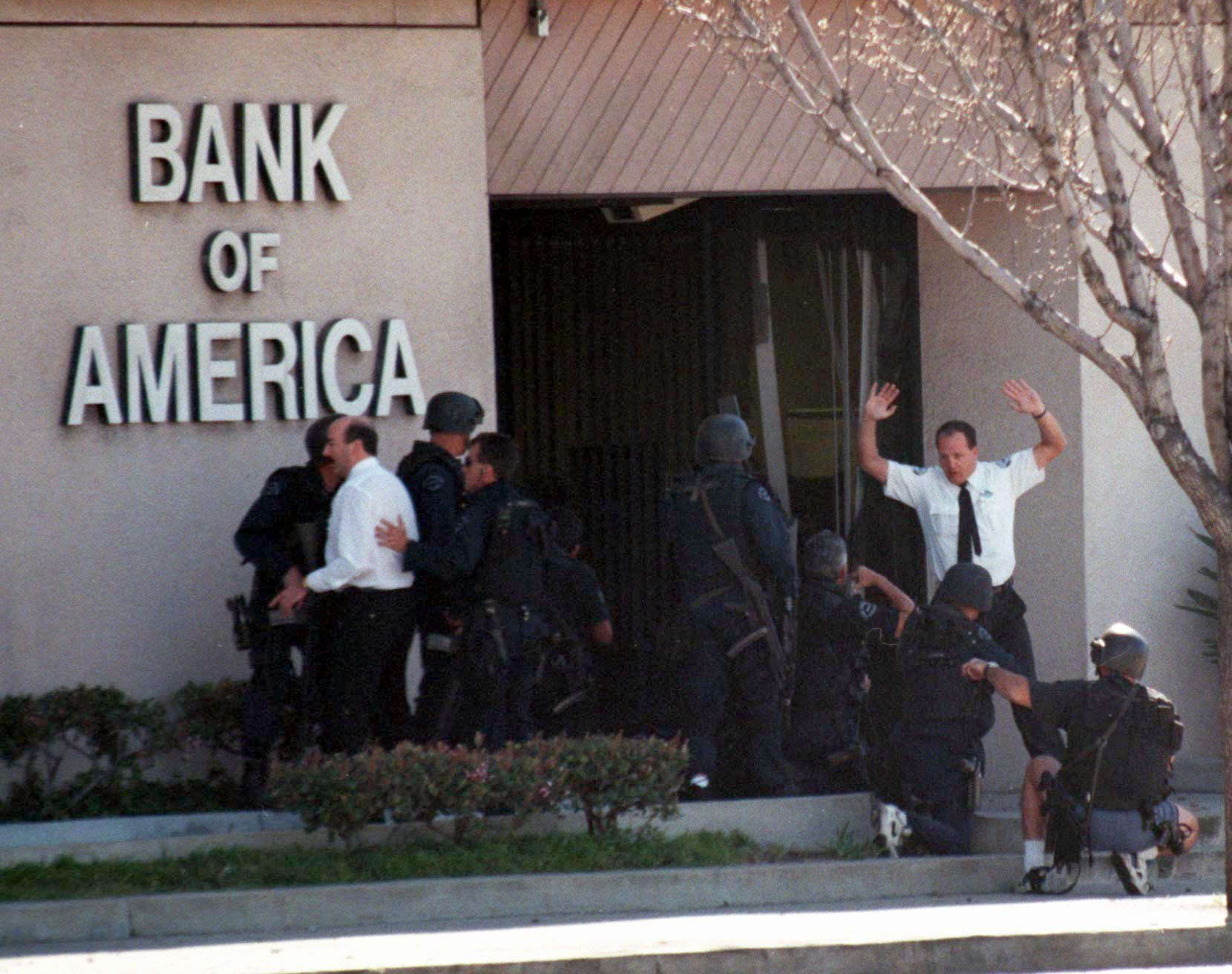 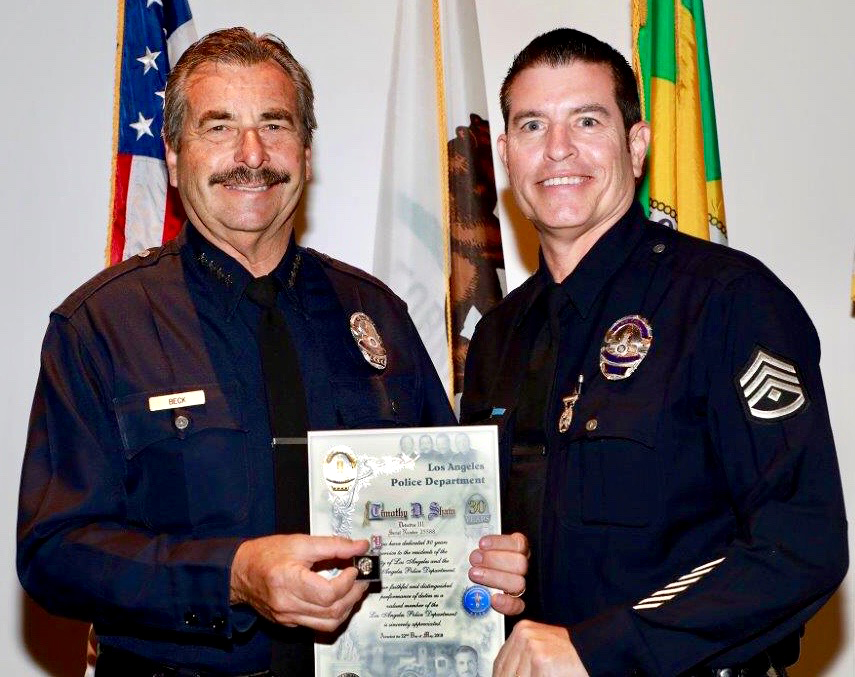 Quiet, after 44 minutes of hell

Phillips tried to flee the scene but was fatally shot multiple times, including a bullet that severed his spine. LAPD officers swarmed Phillips, cuffing his immobile body and pulling the ski mask from his face.

Mătăsăreanu was next to die. With his Chevy shot out, he tried to hijack a pickup truck.

Incredible footage showed an LAPD unit driven by SWAT members fearlessly roaring up to the truck and engaging in a terrifyingly close quarters gun battle. Mătăsăreanu was shot, and died at the scene.

In 2003, the film 44 Minutes: The North Hollywood Shoot-Out was released, showcasing the failed bank robbery.

Last year it was announced another movie, North Hollywood, is planned about the morning gun battle on the San Fernando Valley streets.