Taxpayers shelled out another $5 million ($3.4 million US) to send President Donald Trump to Florida this weekend so he could host a Super Bowl party for paying guests at his for-profit golf course.The president’s official schedule shows him spen…

Taxpayers shelled out another $5 million ($3.4 million US) to send President Donald Trump to Florida this weekend so he could host a Super Bowl party for paying guests at his for-profit golf course.

The president’s official schedule shows him spending two and a half hours Sunday evening at a “Super Bowl LIV watch party” at Trump International Golf Club in West Palm Beach. Tickets sold for $75 each, but were only available to members of the club — the initiation fee for which reportedly runs about $450,000, with annual dues costing several thousands of dollars more.

“Well, obviously there are no TVs in the White House, so what alternative did he have?” quipped Robert Weissman, president of the liberal group Public Citizen. “He could have saved money by chartering a plane and flying club members to watch the game at the White House.”

In response to a query, White House press secretary Stephanie Grisham defended Trump’s trip and attacked HuffPost: “The premise of your story is ridiculous and false, and just more left-wing media bias on display. The president never stops working, and that includes when he is at the Winter White House.”

Her phrase “Winter White House” refers to Mar-a-Lago, the for-profit resort in Palm Beach that is several miles east of the golf course and that doubled its initiation fee from $100,000 to $200,000 after Trump was elected in 2016. Trump frequently mingles with guests at social events there.

On Saturday, for example, Trump appeared at a dinner at Mar-a-Lago arranged by the “Trumpettes,” a group his female supporters. The dinner did not appear on the president’s publicly released schedule, and in any case was a campaign event, not an “official” one.

READ:  Man crushed between truck and wall on worksite

When a pool reporter asked the White House on Saturday what work Trump did over the weekend, the reply was that he had calls and “meetings with staff.” The president did not attend a rally on Saturday for Venezuelan leader Juan Guaido, whom the United States and other governments have recogniSed as the legitimate president of that country. That rally began while Trump was still at his golf course, and attending it could have made him late for the start of the Trumpettes’ dinner.

Trump promised during his presidential campaign that he would separate himself from his businesses if he won. However, he reneged on that vow, as well as on his promise to release his tax returns. 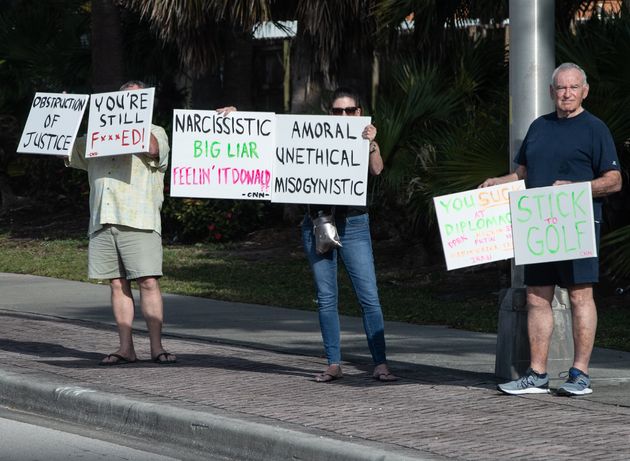 On his most recent financial disclosure form, which was filed last May, Trump claimed he had received $12,325,355 in income from the West Palm Beach golf course over the previous year. It’s unclear how accurate that is, given Trump’s tendency to file widely varying figures to different government authorities.

He told the US Office of Government Ethics in his 2018 financial disclosure, for example, that his Scotland golf courses are worth more than $50 million each, even as he told authorities in the United Kingdom that they had a combined net debt of $65 million.

In any event, money spent at Trump hotels and golf courses flows directly to the president, as he is the sole beneficiary of a trust that now owns his family business. US taxpayers have been the source of at least a few million dollars that have gone to the Trump Organisation in the form of hotel rooms, meals and other expenses for Secret Service agents and other government employees who have stayed on-site with Trump in Florida, New Jersey, Scotland and Ireland.

“When Donald Trump announced that he would break decades of precedent and hold onto his business, many were afraid it was to find ways to keep making money on the side of his work as president,” said Jordan Libowitz with the group Citizens for Responsibility and Ethics in Washington. “Turns out the presidency is more like a thing he does on the side to help make money for his business.”

Trump is using taxpayer money to personally enrich himself because virtually all of his travel is to Trump properties. That is the swamp Trump pledged to drain. Trump is the swamp.former Rep. Joe Walsh (R-Ill.)

This weekend’s trip to Mar-a-Lago was Trump’s 28th to the property since becoming president. Saturday’s and Sunday’s golf outings at the West Palm Beach club brings his total to 79 days there since taking office and 244 total golf days at properties that he owns.

That figure and the $3.4 million for each Mar-a-Lago trip are based on a HuffPost analysis that included the costs of Air Force transportation, Coast Guard patrols, Secret Service security and other expenses, as detailed in a January 2019 report from the Government Accountability Office of Trump’s first four visits to Mar-a-Lago in early 2017.

Trump frequently criticized former President Barack Obama for golfing too much and promised during his campaign that he would be too busy to take any vacations at all, let alone play golf. Instead, he is on pace to play more than twice as much golf as Obama did ― at a cost three times that of Obama’s, because he insists on playing so many rounds at his courses in Florida and New Jersey, which require expensive flights on Air Force One. Obama mostly played golf at military bases within a short drive of the White House.

“Trump is and always has been a con man. In 2016, he said that, unlike Obama, he’d never golf and he’d never take personal trips outside the White House,” said former Rep. Joe Walsh (R-Ill.), who is challenging Trump for the 2020 Republican nomination. “In addition, Trump is using taxpayer money to personally enrich himself because virtually all of his travel is to Trump properties. That is the swamp Trump pledged to drain. Trump is the swamp.”