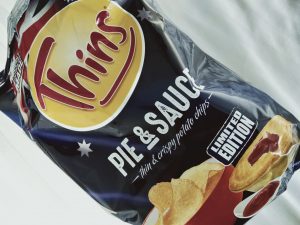 Tasmania has been left out another national campaign.

Chip company Snack Brands has not given the island any sauce on the illustration featured on the packet of its new Pie And Sauce Thins.

Tasmanian Times contacted the company to ask why we are considered unworthy of sauce.

“I checked with our Product Development team and they have confirmed that Tasmania is pictured on the packet but unfortunately the print quality isn’t the best so it’s hard to see the sauce,” said a spokesperson apologetically. “They have assured me that they will address this in future print runs.”

Tasmania has been left off maps numerous times, to the point where the subject has its own Wikipedia page.

YouTuber TasDaz also picked up on the sauce issue in his recent review of the new chip product. “They’ve even put a little splodge of sauce on there,” he said while referring to the sauce-coloured map of Australia on the packet. “Oi…doesn’t look like there’s a Tasmania on there!”

The chips are described by the company as a limited edition.

READ:  Virus rulebreakers rack up $26m worth of unpaid fines: 'We will come after you'