It’s after work on Friday March 13 and a popular brewery on the outskirts of New York City is near empty of customers, save for a small group comforting themselves with pizza and beer.

It's after work on Friday, March 13, and a popular brewery on the outskirts of New York City is near empty of customers, save for a small group comforting themselves with pizza and beer.

As Jason Hoy and Melanie Hansche sit and chat with staff members from their Australian-inspired café Tucker in the college town of Easton, Pennsylvania, the mood is heavy with concern.

Hours earlier, US President Donald Trump declared a national emergency in response to the coronavirus pandemic.

At the time, America's confirmed virus cases were 1701 with 40 deaths. As a comparison, on March 13, Australia recorded 49 COVID-19 cases and no deaths. 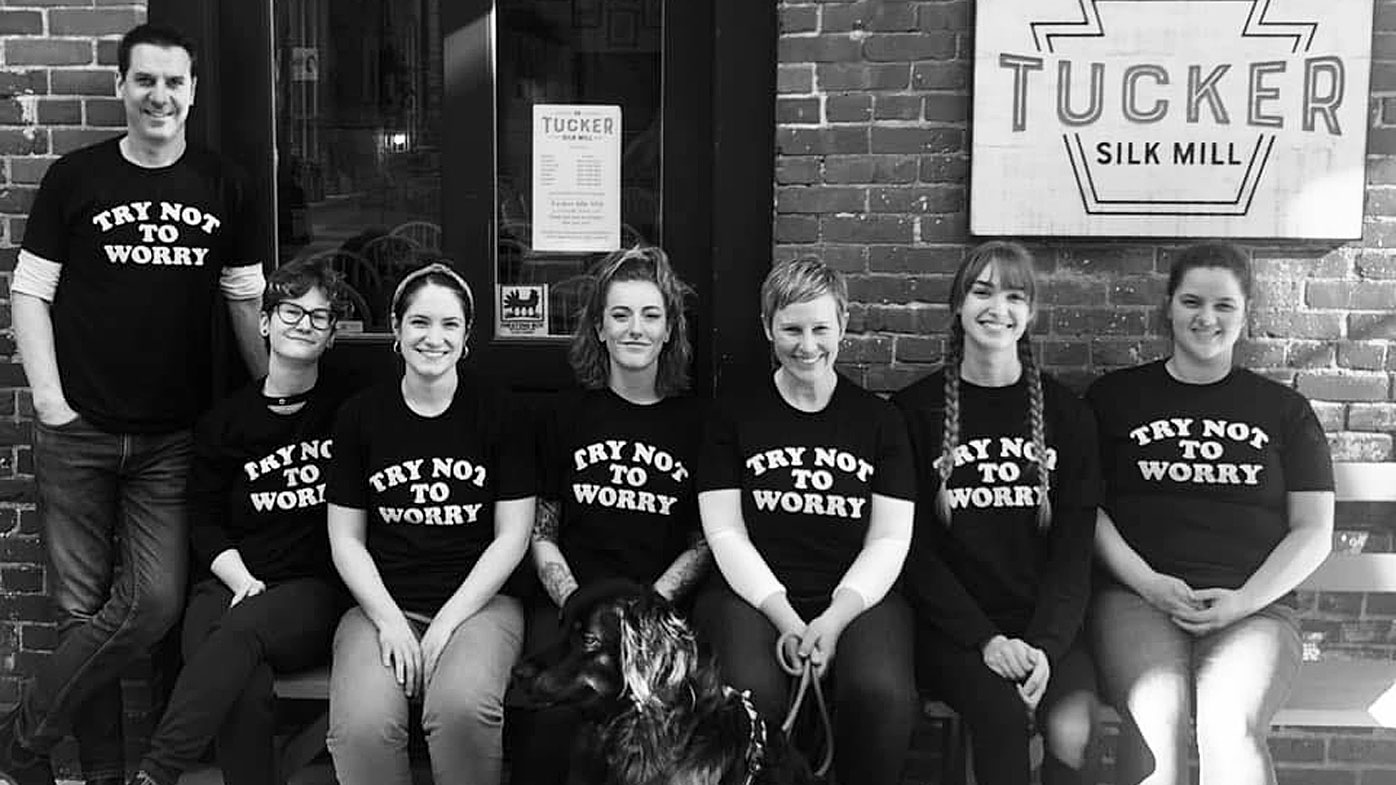 Hoy and Hansche, a married couple from Sydney who travelled stateside for work and adventure, are facing challenging months ahead.

Just days earlier, Hansche was sent home from her day job as a magazine editor after her office closed.

And within 24 hours of their staff sit down, New York state-mandated restaurants open at 50 per cent capacity.

Rumours are also circulating all non-essential businesses will soon be shut down.

As owners of a three-year-old restaurant where a customer's average spend is $20 (US$15) for avocado toast and a flat white, the focus for Hoy and Hansche is all about survival.

Incredibly, a delayed gift for his wife had compelled Hoy to watch news of the global health crisis unfold at its epicentre in Wuhan, China. 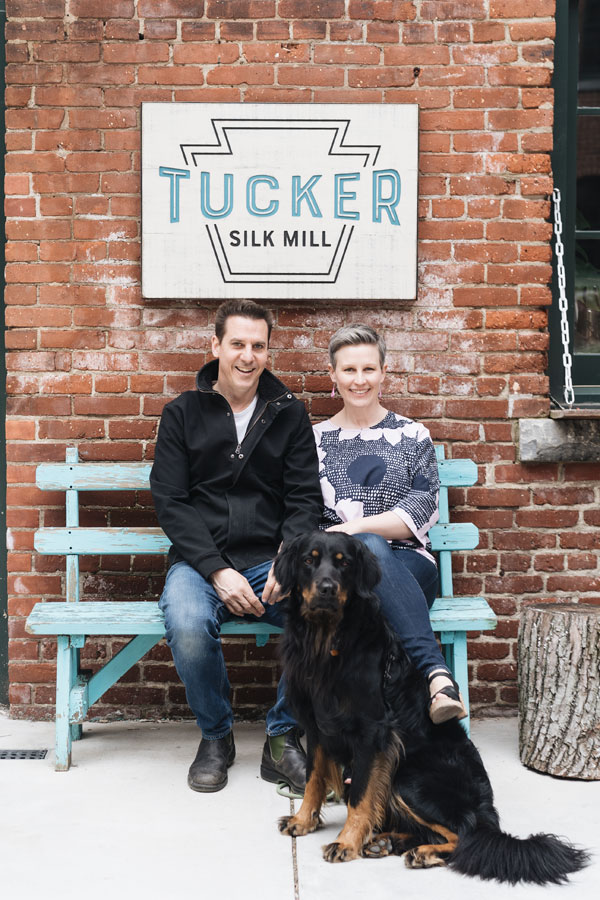 "I was waiting for a Christmas present from Wuhan… noise cancelling headphones from Kickstarter," Hoy told nine.com.au deadpan.

"I had already purchased some masks just watching what was going on."

The couple's initial plan in those early days of the pandemic hitting the US was to close their café and open a week later. This would allow time to adjust seating capacity, menu and staff numbers.

They were aware not all their staff would feel comfortable working during the crisis, with some having immunocompromised parents and parents with cancer.

READ:  Hotel Room Only Has 48 Lamps

On the Sunday night, after too many martinis, Hoy and Hansche had ditched their plan, instead devising a bold new one.

By Monday, they had dramatically transformed their café, in a former 1800s silk mill, into a general store.

They had locked the doors and adopted a contactless slide pick up station for customers by way of a window and two-metre-long table.

"It got really weird, really fast," Hoy said of the situation.

The new plan was sparked, in part, by the café's new point of sale which offered online ordering. So, after working 72 hours on the initial set up, borrowed from his learnings running wine stores in Sydney, they were ready.

Almost overnight, Tucker café went from selling avo toast to customers to being Tucker Provisions - an online grocery store, with access to sourdough loafs, fresh fruit and vegetables and other treats and pantry staples. 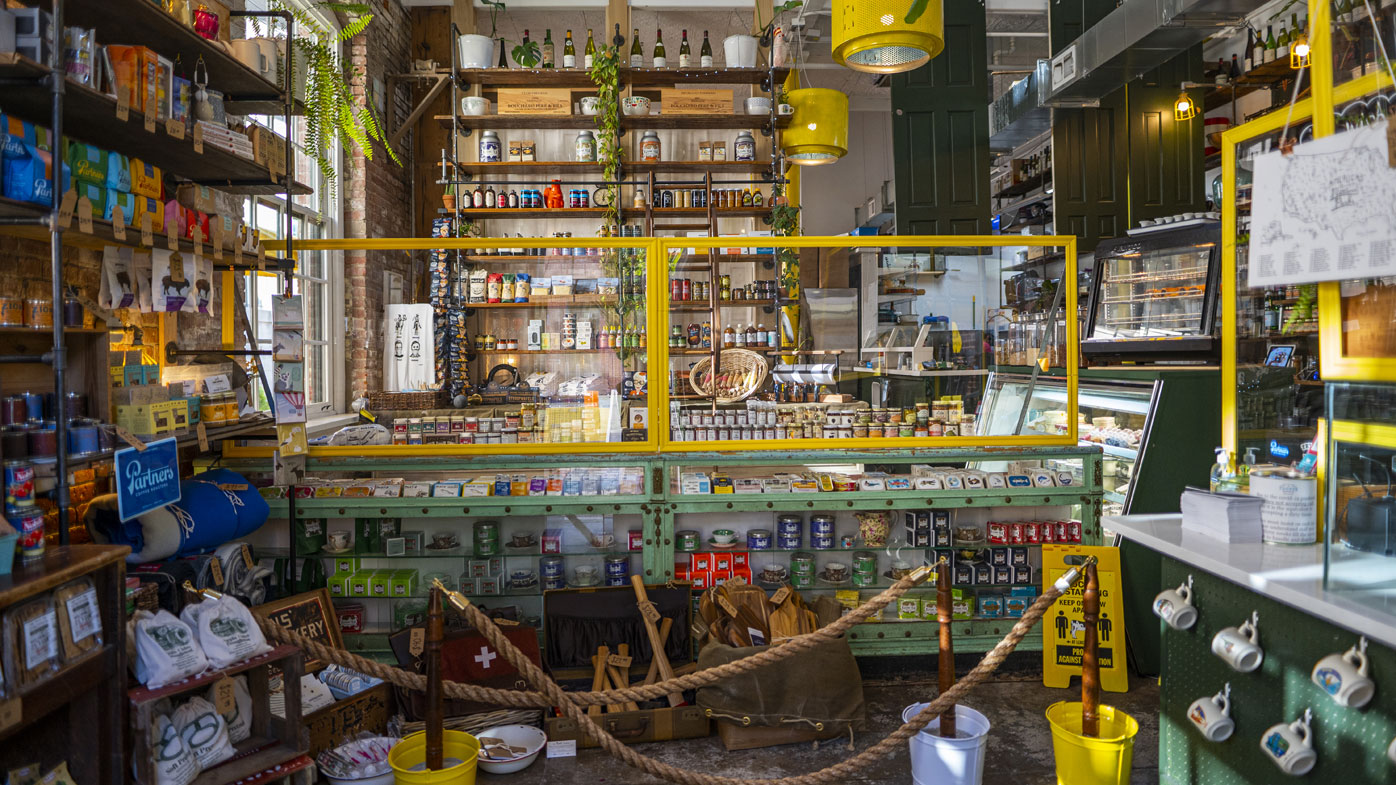 Hoy said with Hansche's help, he worked 18-hour days in that first week to cope with demand from the locals. A staffer, who volunteered for the week, made $2700 (US$2000) in tips for her trouble.

They had embraced a glut from the New York restaurant trade and were using it to provide comfort to their community. It proved an increasing necessity as supermarket shelves in their town were stripped bare by panic shopping.

The couple's ingenuity not only saved their café but saw the average weekly takings increase five or six-fold. They had also helped keep others, key suppliers and local farms, in regular business.

Hoy said this was "in between strange donations", including US$100 notes left in the tip jar by little old ladies in pearls, "saving a farm with 80,000 chickens" and selling 7500 eggs a week for three weeks. As he said, things got strange fast.

READ:  Huge crowds in London in solidarity with US demonstrations

At one point, a local business Freshpet contacted the couple with an incredible offer to buy $5400 (US$4000) worth of gift cards to help Freshpet employees cope during the pandemic. Tucker was one of five local restaurants in the area to be chosen.

In the weeks that followed, Hoy and Hansche said they kept an eye on family and friends back home in Sydney. 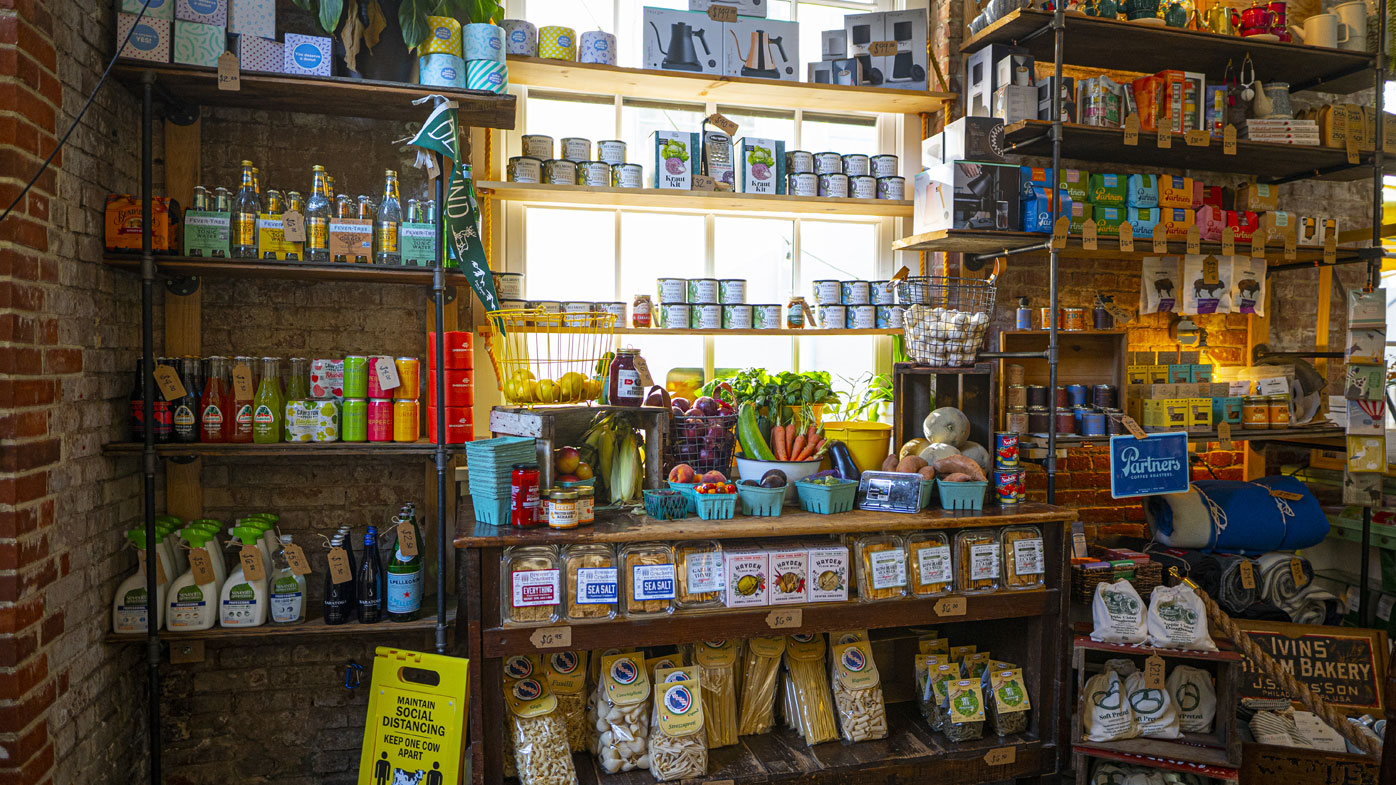 By March 20, NSW Health had released a statement that four cruise ship passengers on a ship called the Ruby Princess had tested positive for COVID-19. The outbreak would trigger a near mirror image scenario as the US - shutdowns, job losses and deaths.

Hoy and Hansche could only watch on helplessly as many friends in hospitality lost work. Not even the slight, cruel, head start the US had on Australia appeared to help.

"I even sat down and sent emails to restaurants in New York and Sydney… here's the way you can change the cash flow," Hoy said.

Yet, as four weeks, six weeks and the months rolled past little action on Hoy's advice was made.

"We're very lucky being in a small city/town so we're not competing. We're in a unique position," he said.

"I think the advantage too was that people felt comfortable here," Hansche told nine.com.au.

"Here was their favourite little café… we can get you veggies and meat, and you can come and pick it up in the window. That was enormously appealing."

Fast forward six months and Hoy and Hansche are again reinventing their business with Tucker 2.0. The virtual general store is now a real live retail store where a total of three masked-up customers can pop in, order and browse. 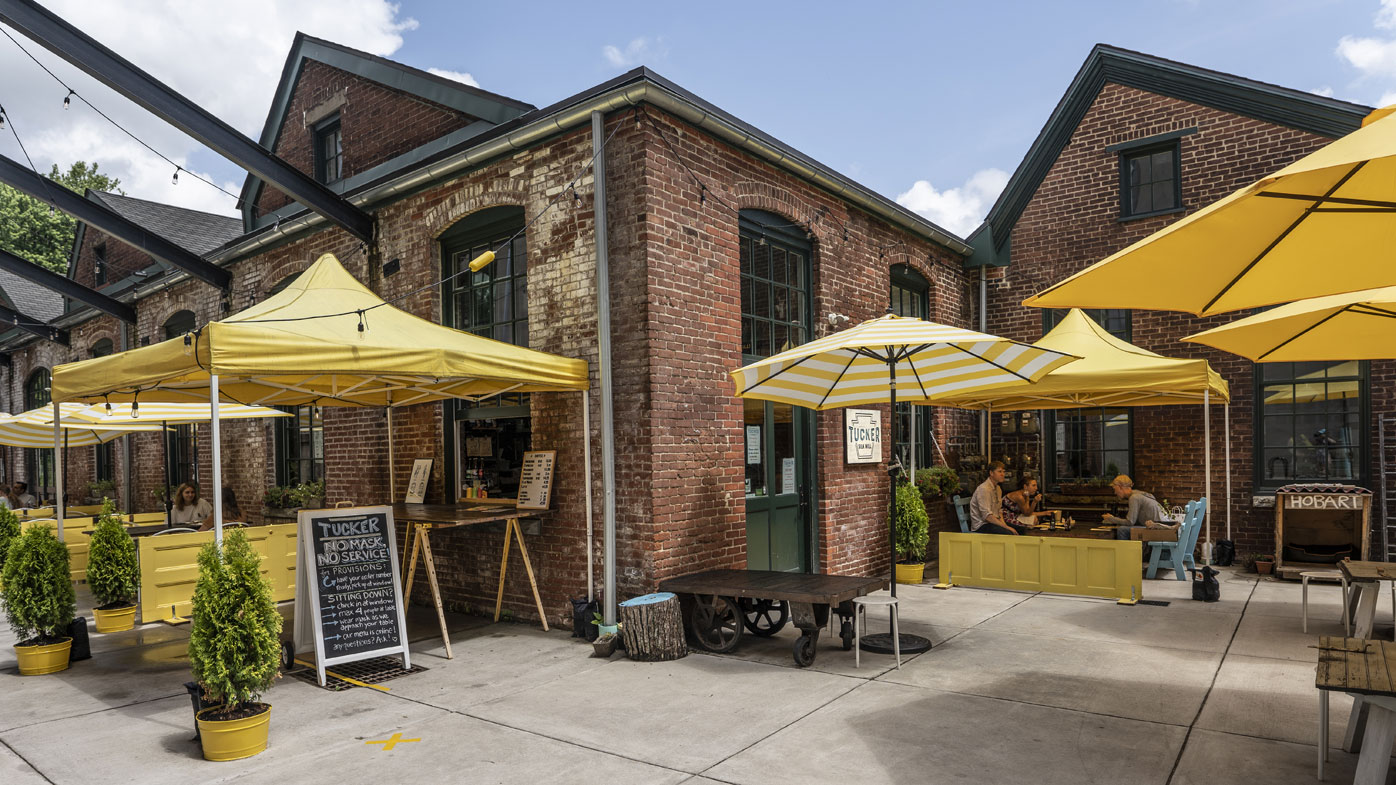 The couple's mask rule as caused friction among some in the community, particularly given they are a small business in a battleground state in an election year.

Ahead of the 2016 US election, political experts had pegged Pennsylvania as a Clinton win. Yet, on election day the state swung to Trump with a historic margin of 0.72 per cent.

In the past week, some have taken to attacking Hoy and Hansche's Tucker on social media, while others have planned doorstep protests.

It's at this point Hoy casually remarks he has stepped across the road to the insurance agency to enquire about what would happen if a brick is thrown through their shop window or a gun is fired.

"Without diving into the division that America faces… we've had to try and manage that response," Hoy said.

"There are many who have sided with the administration and that it (coronavirus) might be a hoax… we've got to balance the response to our business. It's a tightrope."

Hoy and Hansche are quick to add overall the Easton community has been incredibly supportive. 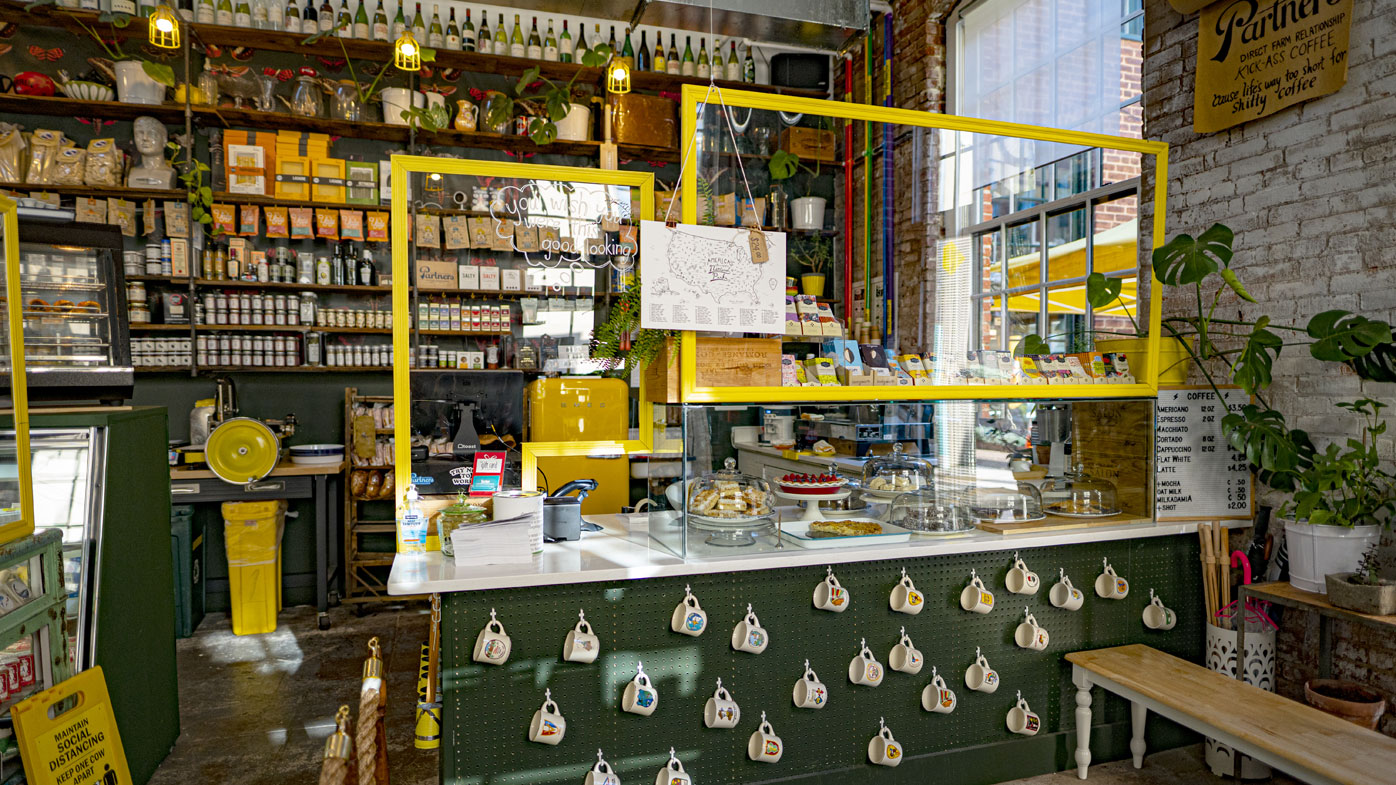 "This community is great and 95 per cent of our customers are awesome," Hansche said.

"The politicisation of masks was perplexing to us. As business owners we need to do the best to safeguard our staff… for us it's the right thing to do. It's good for business."

"As the guy on the frontline it's really a tiny minority it's a creaky wheel, very small group of people," Hoy said.

"We have a very vocal group of angry individuals who have gone after the business but have given a lot of negative reviews that's just the internet and not the reality."