It comes as the Australian Maritime Safety Authority (AMSA) warns the overboard containers may be a "navigational hazard" for other ships.

APL England has docked at the Port of Brisbane after losing about 40 shipping containers on Sunday in rough seas off the NSW coast.

AMSA representative Mark Morrow says the agency will raise concerns about the ship, which has now lost more than 75 containers in Australian waters, with international authorities. 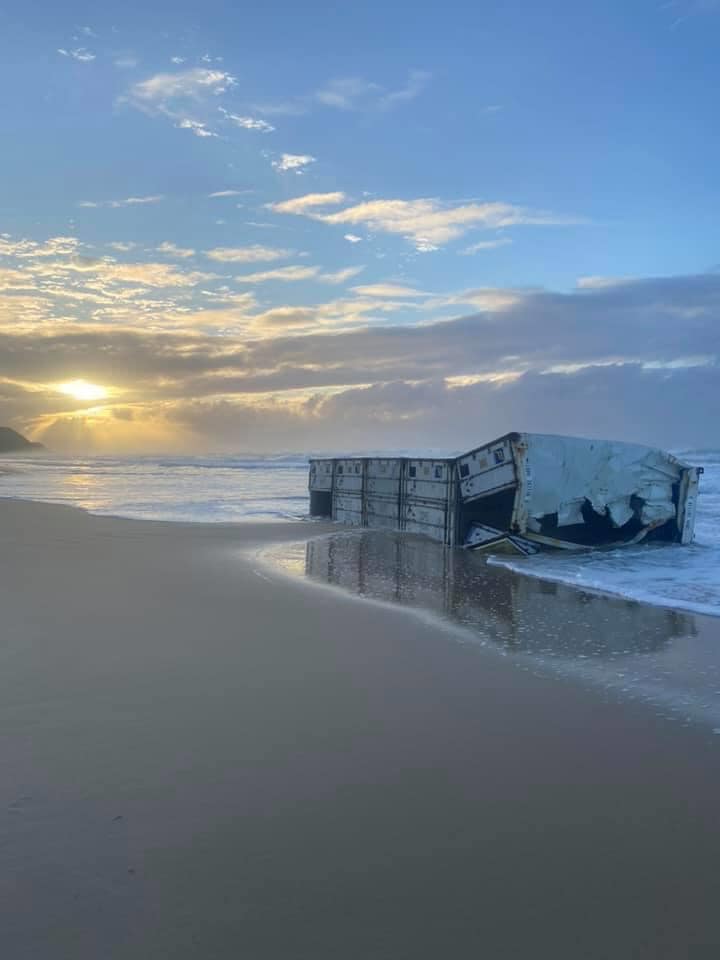 Mr Morrow says aircraft are trying to spot the floating containers to alert ships passing along the east coast.

"Aircraft are trying to locate the floating containers ... at least to provide some advice to shipping in the area as a navigational hazard and also try and retrieve them if we can," Mr Morrow said.

"We remain concerned that shipping containers don't fall from the vessel, even in an eight-metre swell. 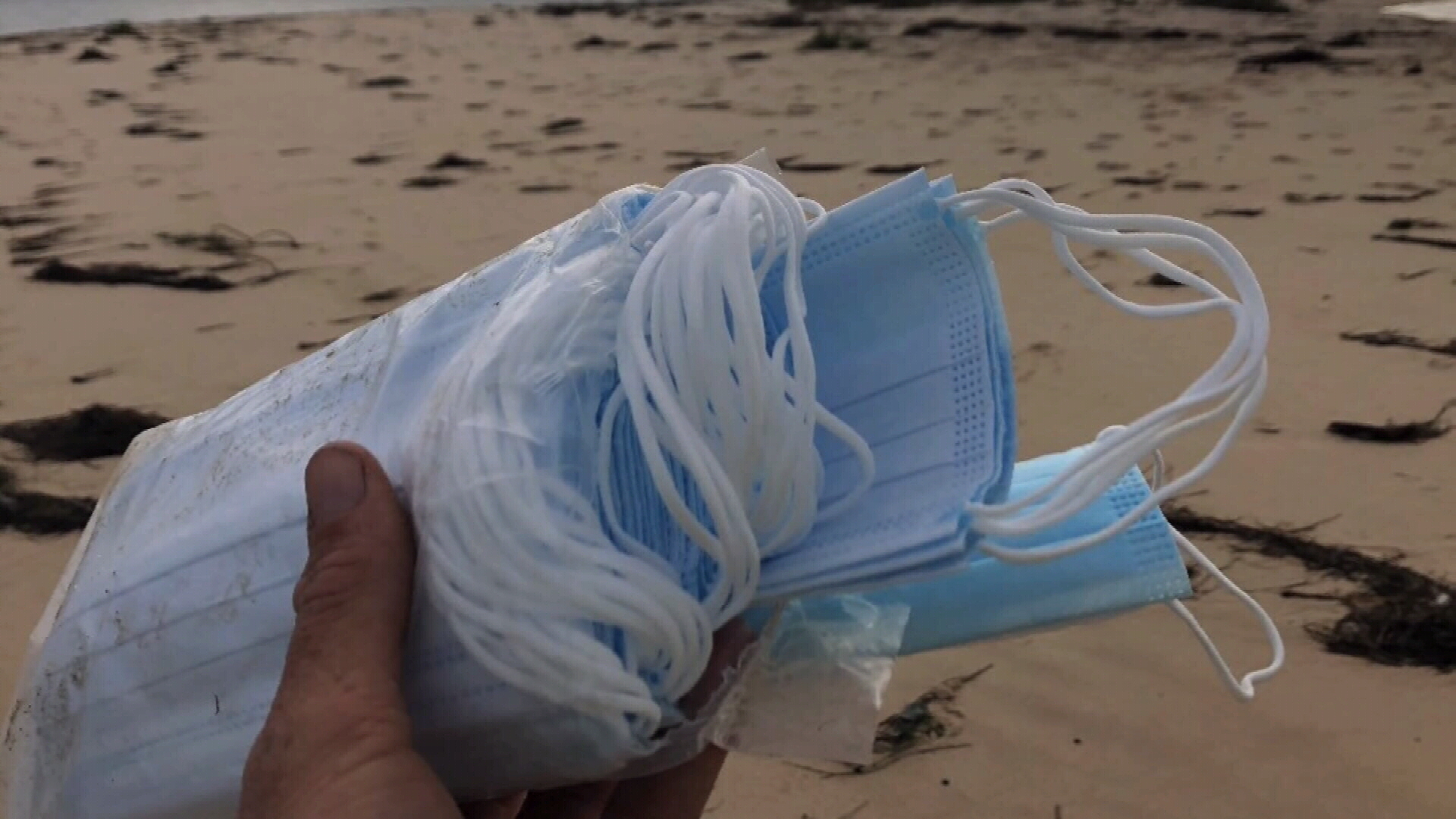 "We expect high standards and we will certainly raise those issues with the international maritime organisation with a view to we can fix or retain those containers into the future."

ANL, the operator of APL England, said 21 of the containers lost on Sunday were empty and none of the others contained regulated hazardous goods or dangerous cargo.

The containers lost overboard not only contained medical supplies but a wide range of goods including household appliances and building materials. 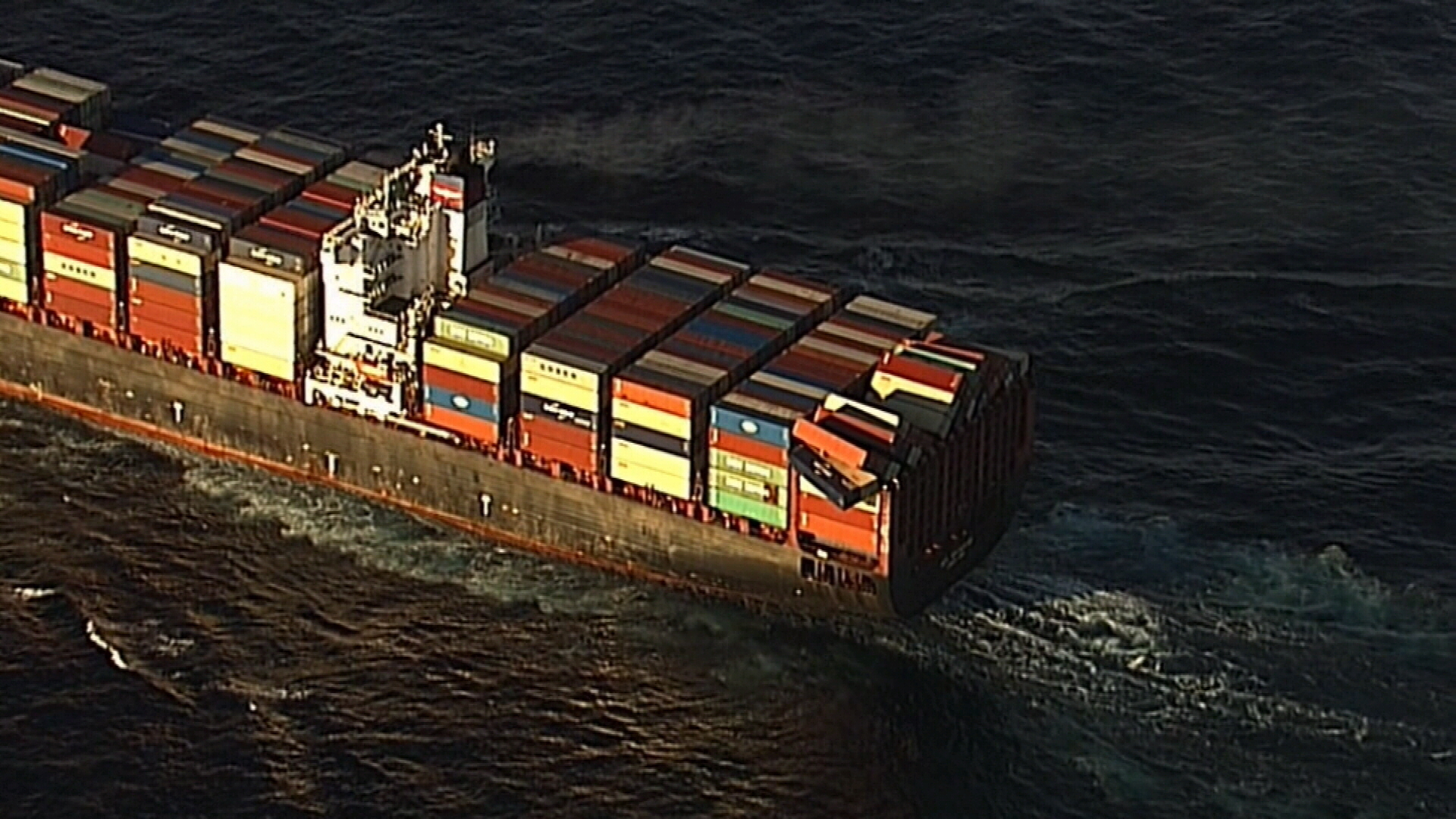 Investigators are scouring the manifest to identify what is missing.

AMSA General Manager of Operations Allan Schwartz said the seaworthiness inspection would help inform if, and how, the ship might be brought safely into the Port of Brisbane. "We have received a report of some medical supplies (face masks) washing up between Magenta Beach and The Entrance. This information has been passed onto NSW Maritime. These correlate to drift modelling of debris and are consistent with items listed on the ship's cargo manifest," Mr Schwartz said.

"No dangerous goods appear to be in the areas affected by the collapse of container stacks and AMSA is working closely with the ship's cargo agent to confirm exactly which containers went overboard." 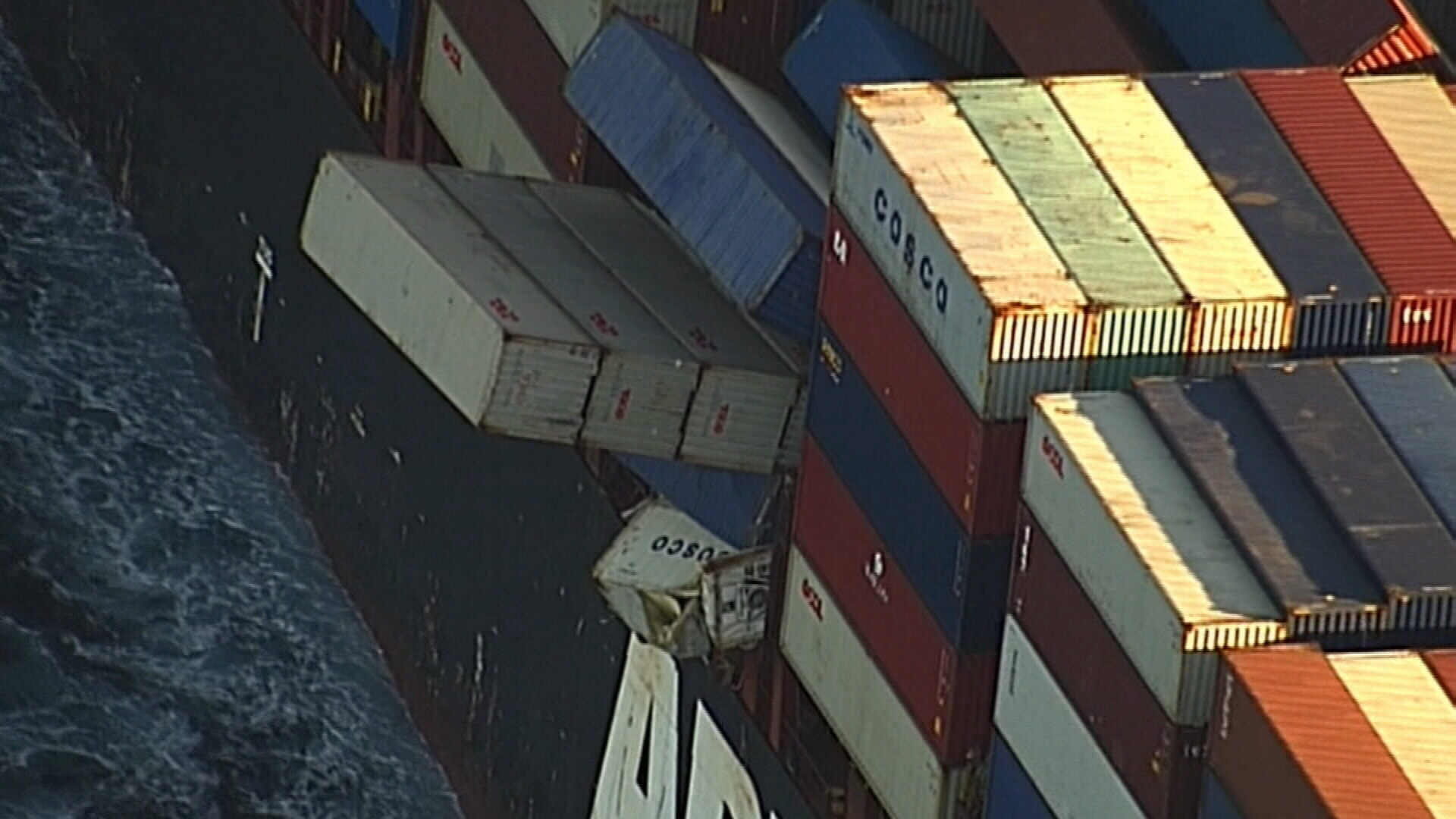 Yesterday, AMSA surveyors conducted a seaworthiness inspection to check the structural and operational condition of the ship following the collapse of container stacks on the deck.

"There's six or seven (containers) hanging overboard, we want to know what's in them and what we can do to make sure they don't go over on the way to Brisbane," Mr Mitchell said.

"There's no rush here, we need to get this right. The consequence of not getting this right can be quite great."

In March, during the coronavirus pandemic, health workers reported a global shortage of face masks and other equipment.

The incident which happened on Sunday had forced the ship to turn around and head toward Brisbane.

Aerial footage from above the vessel showed several containers hanging precariously over the edge of the ship. 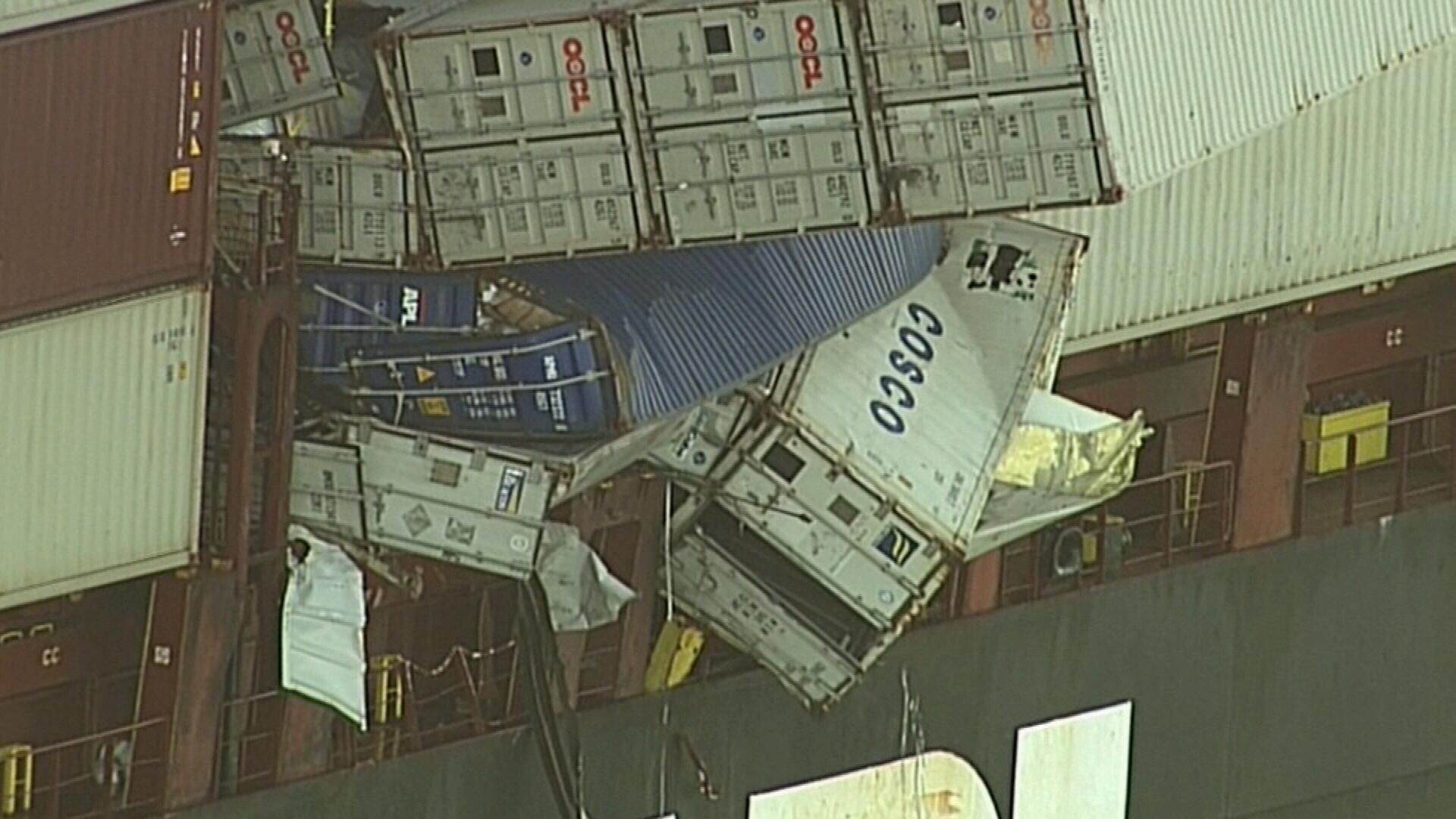 It is estimated, at the earliest, the ship will dock in Brisbane either late tonight or early tomorrow morning.

The APL England suffered a temporary loss of propulsion during heavy seas about 75km southeast of Sydney, which caused it to roll.

A few dozen containers tumbled overboard in waters about 2km deep while another 74 were damaged, leaving nine containers protruding from the ship's starboard and port sides. 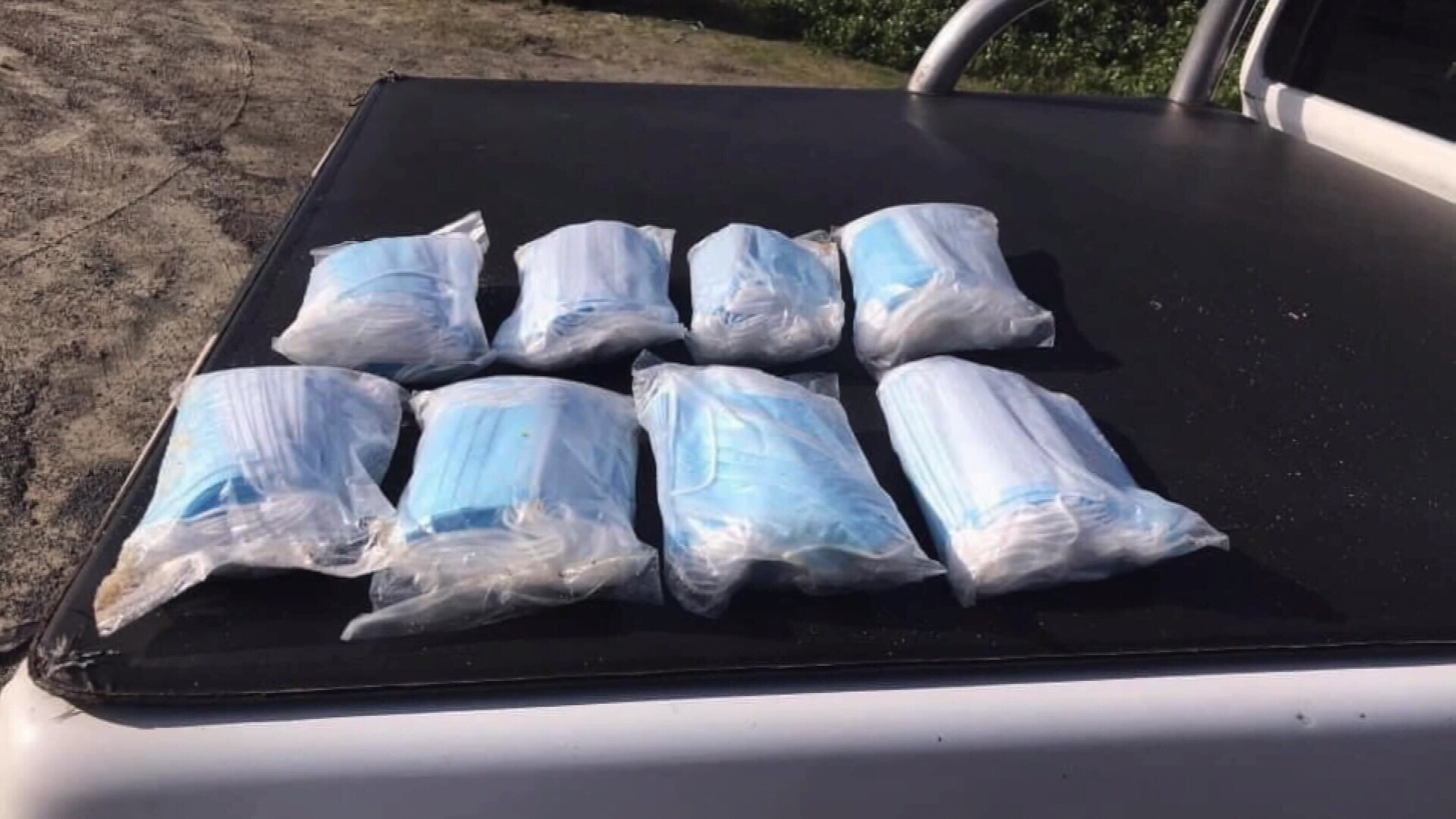 AMSA planes on Sunday searched for containers and cargo debris in the water without success.

The Australian Transport Safety Bureau was also notified and will investigate.

The APL England - under different management - previously lost 37 containers in the Great Australian Bight in August 2016, also due to heavy rolling in rough seas.