The Supreme Court ruled that Title VII of the Civil Rights Act of 1964 protects LGBTQ employees from being discriminated against on the basis of sexual orientation or gender identity.The court on Monday issued opinions on two major decisions with far-r…

The Supreme Court ruled that Title VII of the Civil Rights Act of 1964 protects LGBTQ employees from being discriminated against on the basis of sexual orientation or gender identity.

The court on Monday issued opinions on two major decisions with far-reaching implications for the civil rights of transgender and LGBTQ individuals.

It was a 6-3 ruling, with Chief Justice John Roberts and Justice Neil Gorsuch joining the four liberal justices in the majority.

Writing for the majority, Gorsuch argued that discrimination on the basis of sexual orientation or gender identity is fundamentally no different than discrimination based on sex.

The rulings rest on a pair of arguments the court heard in October in which justices considered whether Title VII of the Civil Rights Act of 1964, the federal law that prohibits workplace discrimination, applies to LGBTQ and transgender workers.

While Title VII bars discrimination on the basis of “race, color, national origin, sex, and religion,” the original bill didn’t define “sex” as a term. The Trump administration used that ambiguity to argue that lawmakers’ original intent focused solely on protecting women’s rights and, therefore, shouldn’t be extended to include sexual orientation or gender identity.

Questions posed by members of the court’s conservative majority in October suggested they largely agreed and believed the remedy should be legislative, not judicial.

“If the court takes this up and interprets this 1964 statute to prohibit discrimination based on sexual orientation,” Justice Samuel Alito said, “we will be acting exactly like a legislature.”

Justice Alito returned to that theme in a dissenting opinion joined by Justice Clarence Thomas.

“There is only one word for what the Court has done today: legislation,” Alito wrote. “The document that the Court releases is in the form of a judicial opinion interpreting a statute, but that is deceptive.”

Near the end of arguments in October, Justice Sonia Sotomayor, a member of the court’s liberal bloc, appeared to argue that Title VII should indeed be used to protect groups that historically have faced discrimination.

The Supreme Court reached the decision after considering a trio of cases all filed in 2018. 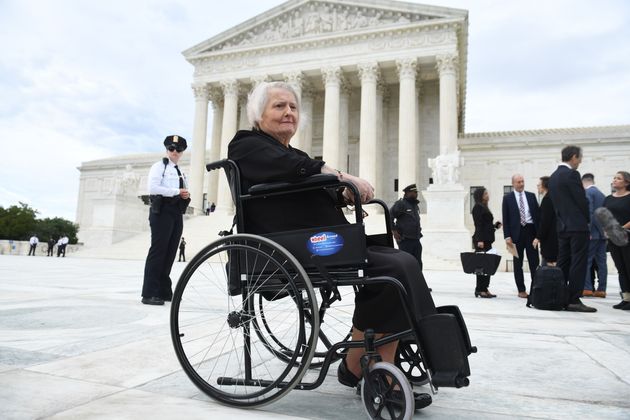 In Altitude Express Inc. v. Zarda, a Long Island skydiving instructor named Don Zarda was fired after telling a client he was gay. While the U.S. Court of Appeals for the 2nd Circuit ruled Zarda’s firing was discriminatory, the 11th Circuit ruled the opposite way in a similar case, Bostock v. Clayton County, Georgia, in which plaintiff Gerald Bostock said he was fired after joining a gay recreational softball team.

“There are truly no words to describe just how elated I am,” Bostock said in a statement Monday. “When I was fired seven years ago, I was devastated. But this fight became about so much more than me. I am sincerely grateful to the Supreme Court, my attorneys, advocacy organizations like GLAAD, and every person who supported me on this journey.

“Today, we can go to work without the fear of being fired for who we are and who we love. Yet, there is more work to be done. Discrimination has no place in this world, and I will not rest until we have equal rights for all.”

And in a third lawsuit, R.G. & G.R. Harris Funeral Homes Inc. v. Equal Employment Opportunity Commission, a transgender woman named Aimee Stephens was fired from her job of six years after she announced plans to transition.

Stephens’ lawyers argued her firing was a clear example of discrimination because of her sex, and the 6th Circuit agreed.

“The unrefuted facts show that the Funeral Home fired Stephens because she refused to abide by her employer’s stereotypical conception of her sex,” the court wrote in a 49-page decision.

“Discrimination against employees, either because of their failure to conform to sex stereotypes or their transgender and transitioning status, is illegal under Title VII,” the court said. “It is analytically impossible to fire an employee based on that employee’s status as a transgender person without being motivated, at least in part, by the employee’s sex.”

Stephens told Vox last year she hoped her lawsuit would encourage others to “always strive to be who you are” regardless of the case’s outcome.

“Deep down you know who you are and don’t let anyone else tell you any different,” she said. “Hold your head high and keep marching forward. It will get better.”

Stephens died on May 12 at the age of 59, after which her wife, Donna, stepped in as the respondent in the case.

“My wife Aimee was my soulmate,” Donna said in a statement Monday. “We were married for 20 years. For the last seven years of Aimee’s life, she rose as a leader who fought against discrimination against transgender people, starting when she was fired for coming out as a woman, despite her recent promotion at the time.

“I am grateful for this victory to honor the legacy of Aimee, and to ensure people are treated fairly regardless of their sexual orientation or gender identity.”

Marina Fang contributed to this report.