Woolworths and Coles are now limiting the amount of items people can purchase on a number of products.

Woolworths and Coles are now limiting the amount of items people can purchase on a number of products.

The supermarkets this morning announced shoppers will only be able to buy two items from each category of mainly packaged goods.

"As the current situation surrounding COVID-19 evolves, we've made a change to the maximum number of products you can buy," Woolworths said in a statement. 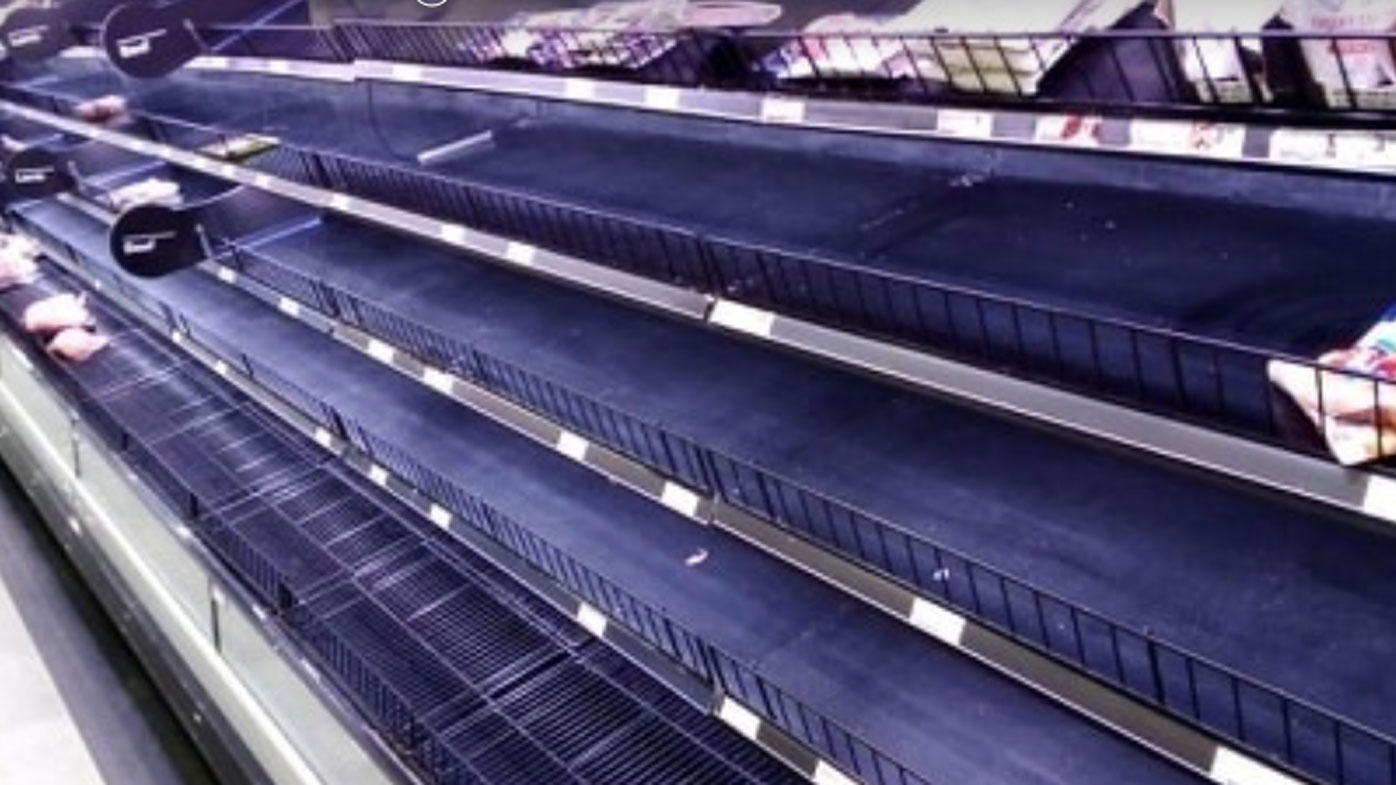 "From today, there is now a per customer, per shop limit of two items from any single category on most packaged products across Woolworths Supermarkets and Metro stores and online.

"This means that you'll only be able to buy two products from any single category or section (such as coffee), regardless of the brand or variety.

"These are in addition to any other limits already in place, and there are some exceptions where there are currently no limits." 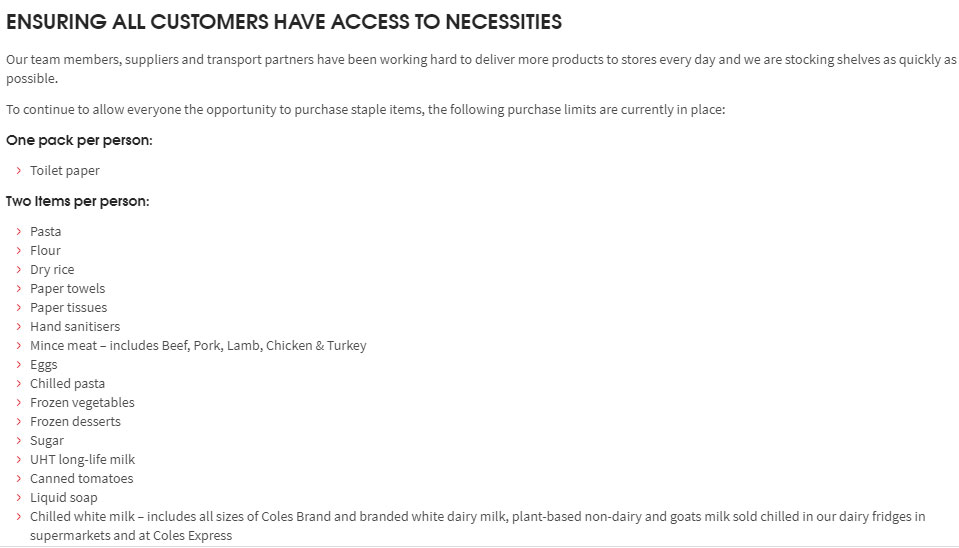 Coles has similar measures from today, including on milk.

"Coles is continuing to introduce additional purchase limits to improve availability for customers," it said on Facebook.

"From today Coles supermarkets and Coles Express will limit the sale of Coles Brand and branded chilled milk, including all sizes of white dairy milk, plant-based non-dairy and goats milk sold chilled in our dairy fridges to two per customer. 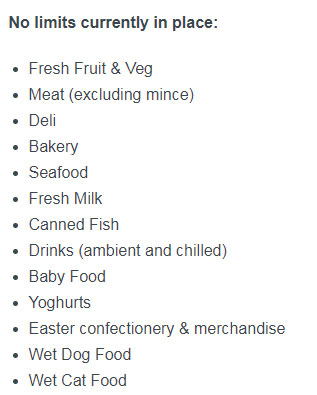 Many shelves at supermarkets remain empty, but Woolworths will close at 8pm tonight to restock shelves as more supplies arrive.

Bosses previously said there were not going to be any issues with running out of goods, but they had to get more to stores.

They have been selling seven weeks' worth of toilet paper in just one day over the past few weeks.

Mr Morrison said this morning he has not ruled out introducing laws to stop hoarding, but has appealed for Aussies to "do the right thing".

"I want to welcome the practical responses that have been put in place by the supermarkets themselves. I think that is sensible," he said.

"I think putting in arrangements for the elderly to be able to visit shopping centres and things like that and supermarkets, that is just good common sense and I would encourage them to continue to do those sorts of thing.

"I would be very disappointed if we had to [introduce laws]. I think Australians are better than that."

Meanwhile, Australia's major supermarket chains have banded together to plead with customers to be considerate of each other and stop abusing staff, in the wake of mass panic buying and hoarding sparked by the spread of the coronavirus.

The call, made in newspaper advertisements across the country today, comes after more footage emerged online of customers verbally attacking retail staff because they couldn't find the goods they wanted in-store.

Aldi, Coles, IGA and Woolworth said they were doing everything they could to get as much produce on the shelves as possible, often under difficult circumstances. 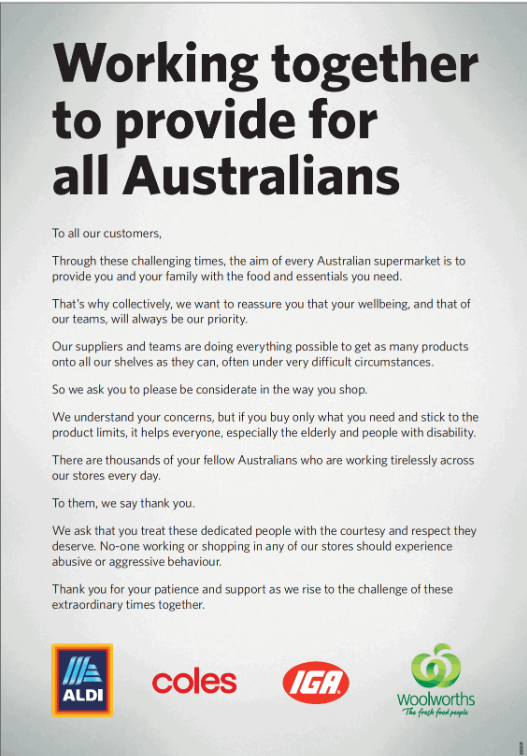 "So we ask you to please be considerate in the way you shop," the ad says.

"We understand your concerns, but if you buy only what you need and stick to the product limits it helps everyone, especially the elderly and people with disability.

"No one working or shopping in any of our stores should experience abusive or aggressive behaviour."

A Woolworths employee was allegedly stabbed at store in Rosebud, on Victoria's Mornington Peninsula, yesterday.

It is believed the employee was collecting trolleys, when he was approached by an unknown man and stabbed to the lower body.

Coles today held its first "community hour" for seniors and pension card holders from 7am at its stores nationwide, before opening to everyone else.

"We believe all Australians deserve the right to access their share of grocery items, particularly the elderly and the vulnerable," Coles CEO Steven Cain said.

Coles is trying to employ more than 5000 casual workers to help restock its supermarkets quicker under a fast-tracked induction process and will hire more Coles Online delivery van drivers.

Panic buying sparked by the spread of coronavirus in Australia has seen supermarkets stripped of toilet paper, pasta, rice and frozen food, as well as tinned and other dried goods. 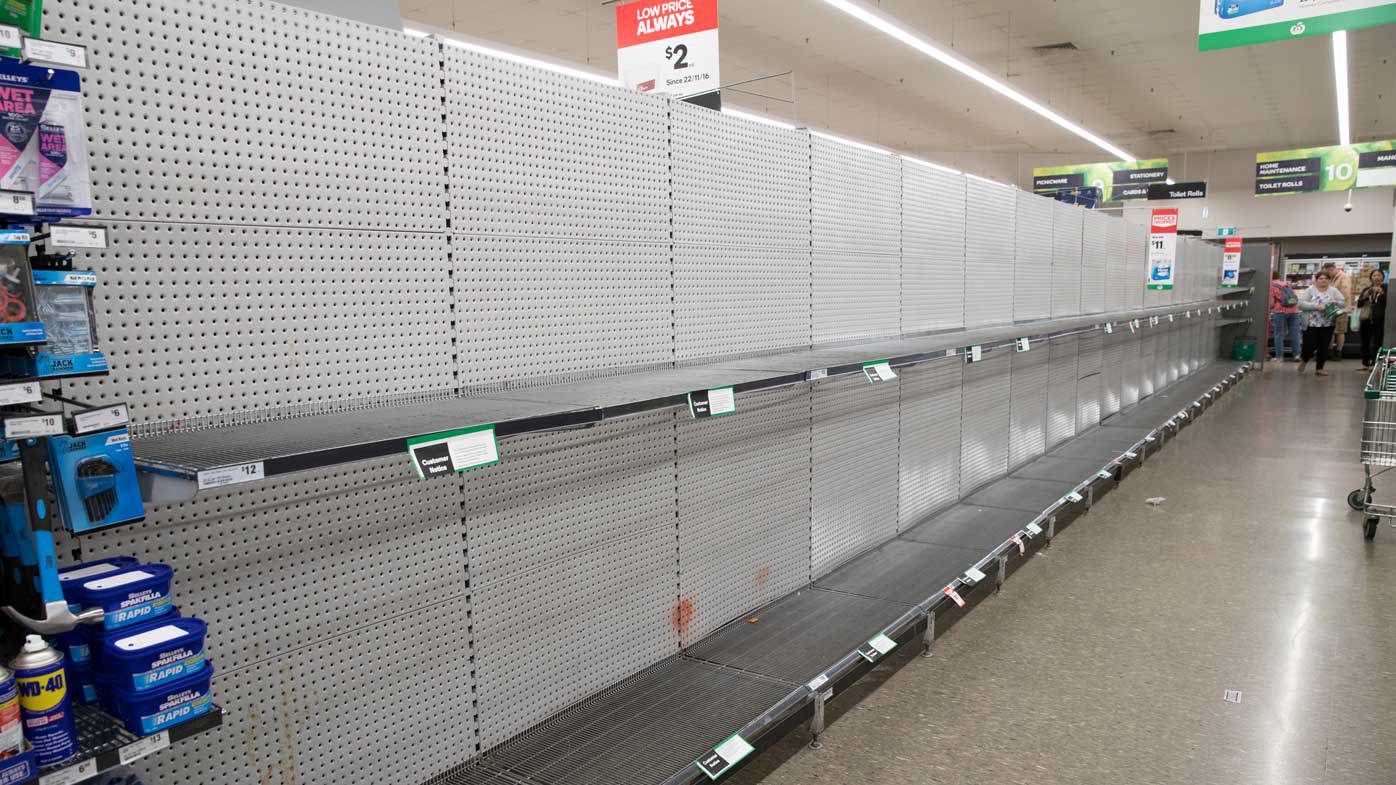 The issue has caused stress and frustration amongst elderly shoppers, many of whom find it difficult to make frequent visits to supermarkets for essential goods. In many cases, particularly for toilet paper, the shelves are often bare.

People with government-issued concession cards yesterday flocked to Woolworths, which held the country's first dedicated shopping hour for the vulnerable from 7am.

But not everyone was happy. At Woolworths Marrickville in Sydney's inner-west shoppers were complaining that some stock wasn't available.

"Our supply chains are working 24/7 to make sure they get product to our stores," he said.

More broadly, Mr Harker said there was no shortage of goods in Australia.

"It is a logistics exercise of moving the product to get it back into stores with the pace and demand we're seeing," he added. The Woolworths shopping-hour program will be reviewed later this week to see if it can be improved.

Meanwhile, IGA is considering whether to roll out a similar pensioners-and-seniors-only shopping hour across its 1300 Australian stores.

The idea is being trialled at an IGA in Melbourne's Altona, with a shopping hour between 6am to 7am, which could be extended across its network if successful. A decision is expected soon.