See the latest stories on the coronavirus outbreak.A supermarket worker was spat at by a customer attempting to stockpile Pot Noodles while another was told: “I hope you get the virus and die,” as panic-buying blighted the nation’s re…

A supermarket worker was spat at by a customer attempting to stockpile Pot Noodles while another was told: “I hope you get the virus and die,” as panic-buying blighted the nation’s response to coronavirus.

An eyewitness described the scene at a packed branch of Asda in the Wirral, Merseyside, on Saturday, as a man in his 30s attempted to buy more than the three Pot Noodles allowed by the store.

A woman in her 40s working behind the checkout attempted to enforce the rules, brought in to ensure stocks could be maintained, “and the gentleman objected to it and spat at her”, according to businessman Andy Smith, who was in the store.

The man then left the store without buying anything in a shocking incident that was barely registered by shoppers.

“Everyone was so wrapped up in making sure everybody can get a bog roll or a Pot Noodle rather than actually having a bit of community spirit,” Smith told HuffPost UK.

The 47-year-old, a former prison officer and military contractor who now runs a firm training security dogs, called on the government to step in.

“We’re dealing with potentially one of the most hostile situations we’ve ever been in, in this country,” he said.

“There’s thousands of guys up and down the UK with skills who should be drafted back in – ex-army, ex-prison service, ex-police, all in the private sector – who should be asked to form a home guard type of thing and tighten the country up.

“You’ve got Boris banging on about the NHS – what about national security?”

The incident, which was raised in parliament by Labour MP Bill Esterson, was just one of the “horrendous” cases of abuse revealed by supermarket workers in recent days as some customers grow angry over restrictions and empty shelves. 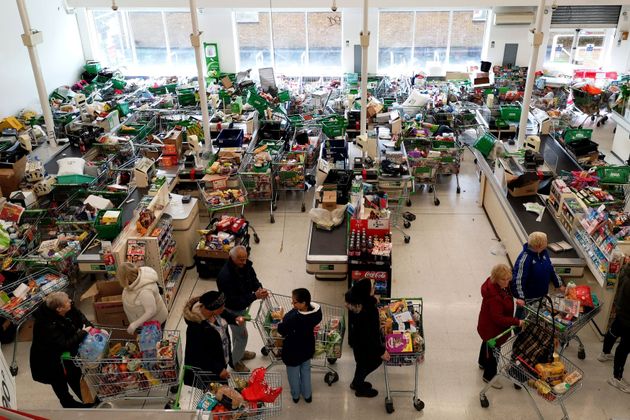 Scenes of huge queues and aisles cleared of essentials have dominated coverage of the Covid-19 pandemic in the last few weeks, with stores across Britain inundated with crowds despite warnings for people to keep their distance.

On Saturday, environment secretary George Eustice pleaded with the British public to “be responsible when you shop” as it was revealed that more than £1bn of food had been stockpiled in homes across the country.

From new parents unable to buy supplies for infants to nurses leaving hospitals after hours on critical care wards to find empty shelves, stockpiling is affecting almost everybody – but it’s the supermarket workers who are dealing with the chaotic scenes in-store day in, day out.

READ:  Blackberry phones to disappear from market as production stops

One Asda employee, who has worked in retail for more than a decade, said the only word she could use to describe the past week was “horrendous”.

“The way people are shopping, the abuse we have received – it’s absolutely crushing,” they said. “I’ve never experienced anything like this.”

She explained staff had routinely been subjected to verbal abuse, with one colleague who had tried to implement a rule on how many products a customer could buy being told: “I hope you get the virus and die.”

“We’re right at the front of it all day and we’re frightened,” they added. “None of us want to be there, but we’ve got a job to do. Who else is going to do it?

“Just a few weeks ago we were discussed as low-skilled workers, and now all of a sudden we’re key workers – but the way we’re being treated by customers is causing a lot of anxiety and we don’t feel safe.

“I think there should be limits on the number of people allowed in the store at any one time. It’s too busy, and social distancing just goes out the window.” 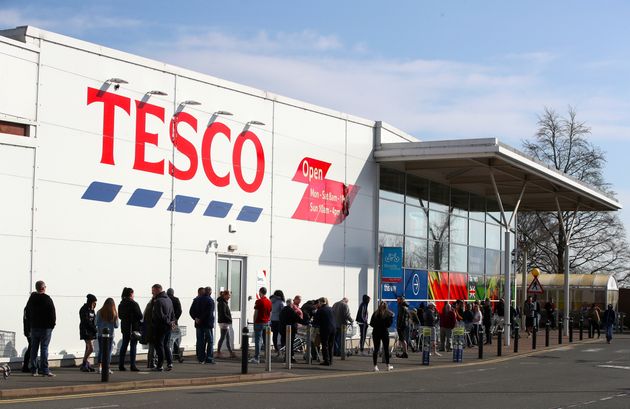 Akafi Ali, 24, who has worked at aSainsbury’s store in north London for almost three years, said the past few weeks had been “absolutely crazy”.

He added: “We’ve been trying to do the very best we can for the customers and staying as calm as we can, because if we look like we’re panicking then they’ll start to panic even more.

“Most of the frustration is coming from customers who can’t find what they’re looking for and think we’re hiding it out the back.

“We’re doing as much as we can – if it’s not on the shelves it’s because we don’t have it. We’re waiting for deliveries like everybody else, and even though we want to we can’t just bring a product out of nowhere.”

He described how although he hadn’t yet witnessed anything beyond verbal abuse, the atmosphere in store was such that colleagues were afraid of potential physical confrontations over empty shelves.

Ali explained that his managers had been extremely understanding, with full staff briefings before a shift and relief in high-pressure areas of the store such as the tills if members of staff felt as though their mental health was suffering as a result of the work.

“It’s like Christmas but 10 times busier and without any of the preparation,” he said. “We’re taking it as a team, but it is really tiring.”

Raising the spitting incident in the Commons on Monday, Sefton Central MP Esterson warned a “lack of sense of some parts of the British public is putting retail workers under enormous pressure and at threat”.

He urged ministers to ramp up security for supermarket staff who cannot observe social distancing rules at work.

Home Office minister Kit Malthouse responded: “The protection of retail workers is one of the uppermost issues in our mind.

“I have myself noticed a number of retailers who are taking protective measures with measurement on the floor, taping on the floor where people should stand so they are staying two metres from a retail worker.

“But he’s quite right, where there are more serious cases, action does need to be taken.

“In the incident he mentions, as far as I can see that’s a crime and that should be reported to police and actioned accordingly.” 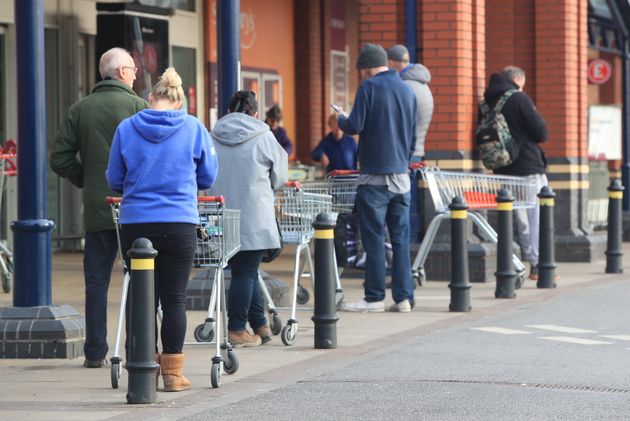 He said: “Retail workers are worried about the huge numbers of people coming into stores and want social distancing measures put in place across the board. They are rightly concerned about their own health and that of customers.

“With pubs and restaurants closed and the government telling people to act, retail workers are anxious about the vast numbers of people they’re coming into contact with daily.

“Extra industry standard security is paramount – our retail workers are on the front line and they need the personal protection equipment, guidance and support they deserve.”

Responding to the employee’s concerns, an Asda spokesperson said: “We are consistently listening to government and health service advice about how best to operate our stores and protect colleagues and customers and are regularly updating colleagues on how best to go about their duties whilst maintaining high levels of personal hygiene.”

Asda has been approached for further comment about the spitting incident in the Wirral.

A spokesperson for Sainsbury’s said: “In these challenging times the safety of our colleagues and customers is our highest priority. Soon we will have reminders to keep a safe distance of two metres apart displayed throughout our stores.

“We are asking customers to use cards at tills and we are working on introducing screens at manned checkouts as quickly as possible.

“We are also actively reviewing the best options for queuing systems inside and outside our stores and will implement the safest measures as soon as we can.”