A statue of slaver Robert Milligan outside the Museum of London Docklands is being pulled down, the local mayor has confirmed.The decision to remove it came after the toppling of a statue of slave trader Edward Colston in Bristol by anti-racist pr…

A statue of slaver Robert Milligan outside the Museum of London Docklands is being pulled down, the local mayor has confirmed.

The decision to remove it came after the toppling of a statue of slave trader Edward Colston in Bristol by anti-racist protesters on Sunday. It sparked a call for all imperialist monuments to be taken down as Black Lives Matter protests sweep the UK.

This comes after the owner of the land on which Milligan’s monument stands, the Canal and River Trust, announced on Tuesday that it was working towards removing the statue “as soon as possible”.

John Briggs, the mayor of Tower Hamlets, said in a video posted from his Twitter account: “This has become the focus of a lot of anxiety and anger in our community. We need to take it, put it into storage and then talk about what we can learn from this and how we can help these events to make us a stronger community.”

I’m down on site at West India Quay as the statue of Robert Milligan is being removed #Blacklivesmatterpic.twitter.com/FCTjZVgf0c

Behind him, builders had erected a fence around the statue and were about to cut the bolts that held it to the base.

A petition to remove the statue had been launched by Tower Hamlets councillor Ehtasham Haque, and received more than 1,000 signatures within the first 24 hours.

Please see our latest statement on the statue of Robert Milligan at London Docklands. @EhtashamulHaque@TowerHamletsNow@MuseumofLondon@SadiqKhan#RemoveMilligan#BlackLivesMattterspic.twitter.com/y4MXivjRLx

In a statement, Haque said the “very existence of Robert Milligan’s statue to glorify slave trading in 2020” was “an insult to humanity”.

“A statue represents glorification and honouring that person’s life, not [education] of history,” he said. “I cannot honour a slaver and I never will.

“Imagine yourself or one of your family members being bought and sold as a product and then try and lecture us on the importance of history by a statue.”

My statement on the statue of Robert Milligan at West India Quay pic.twitter.com/OTA9FPpBLL

Built in 1895 – the same year as the Colston statue in Bristol – the monument to Milligan sits outside the Museum of London Docklands and has long been the subject of controversy.

A wealthy Scottish merchant and slave-owner, Milligan was responsible for the construction of the West India Docks, which became the global trading hub of London.

Born in around 1746, he oversaw his family’s two sugar plantations in Jamaica, which were worked by more than 500 enslaved people.

The Museum of London said in a statement that it believed that the placement of a sign saying “Black lives matter” in the statue’s hands and a shawl covering its face “should remain as long as the statue remains”.

The Museum of London recognises that the monument is part of the ongoing problematic regime of white-washing history, which disregards the pain of those who are still wrestling with the remnants of the crimes Milligan committed against humanity.

“Now more than ever at a time when Black Lives Matter is calling for an end to public monuments honouring slave owners, we advocate for the statue of Robert Milligan to be removed on the grounds of its historical links to colonial violence and exploitation. We are currently working with a consortium to remove this statue and are aware of other legacies and landmarks within the area.”

The museum added: “The Museum of London recognises that the monument is part of the ongoing problematic regime of white-washing history, which disregards the pain of those who are still wrestling with the remnants of the crimes Milligan committed against humanity.

“At the Museum of London we stand against upholding structures that reproduce violence, and have previously engaged in interventions that critically engage with pro-slavery lobbying.

“We are committed to the processes of learning and unlearning as fostered in our ‘London, sugar and slavery’ gallery, which opened in 2007 at the Museum of London Docklands. This gallery tells the history of the transatlantic slave trade and London’s involvement as once the fourth largest slaving port in the world.

“The museum, being another physical manifestation of slavery situated in an old sugar warehouse, constantly challenges the contentious nature of this history.” 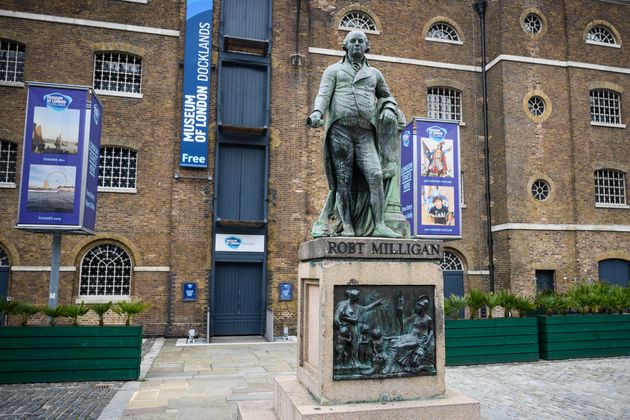 It added that the museum was “committed to the processes of learning and unlearning” and that it stood “against upholding structures that reproduce violence”.

Milligan – along with other West India planters and merchants – built London’s West India Docks at the start of the 19th century to import sugar, rum and coffee from Caribbean plantations.

At the time of his death in 1809, there were 526 people enslaved on his plantation in Jamaica.

According to the museum, Milligan was a driving force behind the docks, which were not only funded in part by profits from slavery, but were designed to make the import of slave-grown goods more efficient.

Milligan also has a local street named after him in Limehouse, London.