A member of the public in South Australia has found murdered aged care worker Jasmeen Kaur's ID and black shoes as detectives work to unravel her death.

Detectives revealed the person found Jasmeen's belongings, including items police allege that were used to restrain her, stuffed in a bin at Kanyaka between Quorn and Hawker.

The search continues for her handbag, which police believe will provide more clues into the circumstances of her killing.

READ MORE: 'She will always be a part of me': Family mourns aged care worker, as police continue to investigate her final hours

The 21-year-old's body was found buried in a shallow grave in the Flinders Ranges on March 7, more than 400 kilometres from where she was last seen leaving work.

She had been reported missing by her family after she failed to turn up at work the day prior. Her car was still in the carpark at the aged care facility where she worked.

A man, who cannot be named, has been charged with her murder after he led detectives to her grave on Sunday morning. 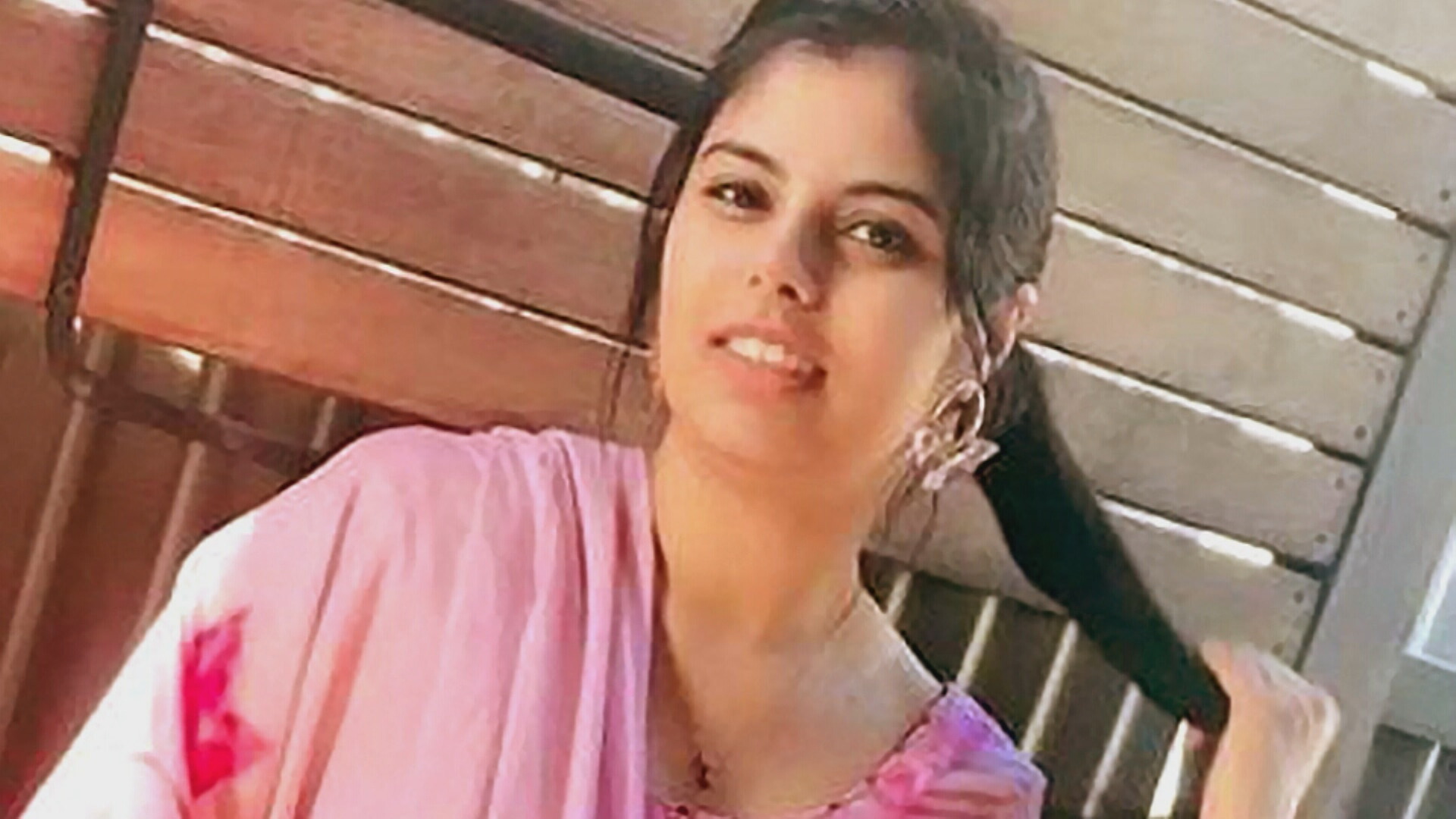 The man denies the being involved in her death.

Police allege that the 21-year-old finished her shift at Southern Cross Homes in the Adelaide suburb of North Plympton on March 5 at 10pm and left her car in the car park.

"We believe it to be extremely unlikely that Jasmeen left willingly with anybody and are investigating that possibility that she was taken by force," Detective Superintendent Bray said.

Police allege that she is believed to have left with an Indian man aged about 20, described as having "a neatly trimmed beard and moustache, and neatly dressed". 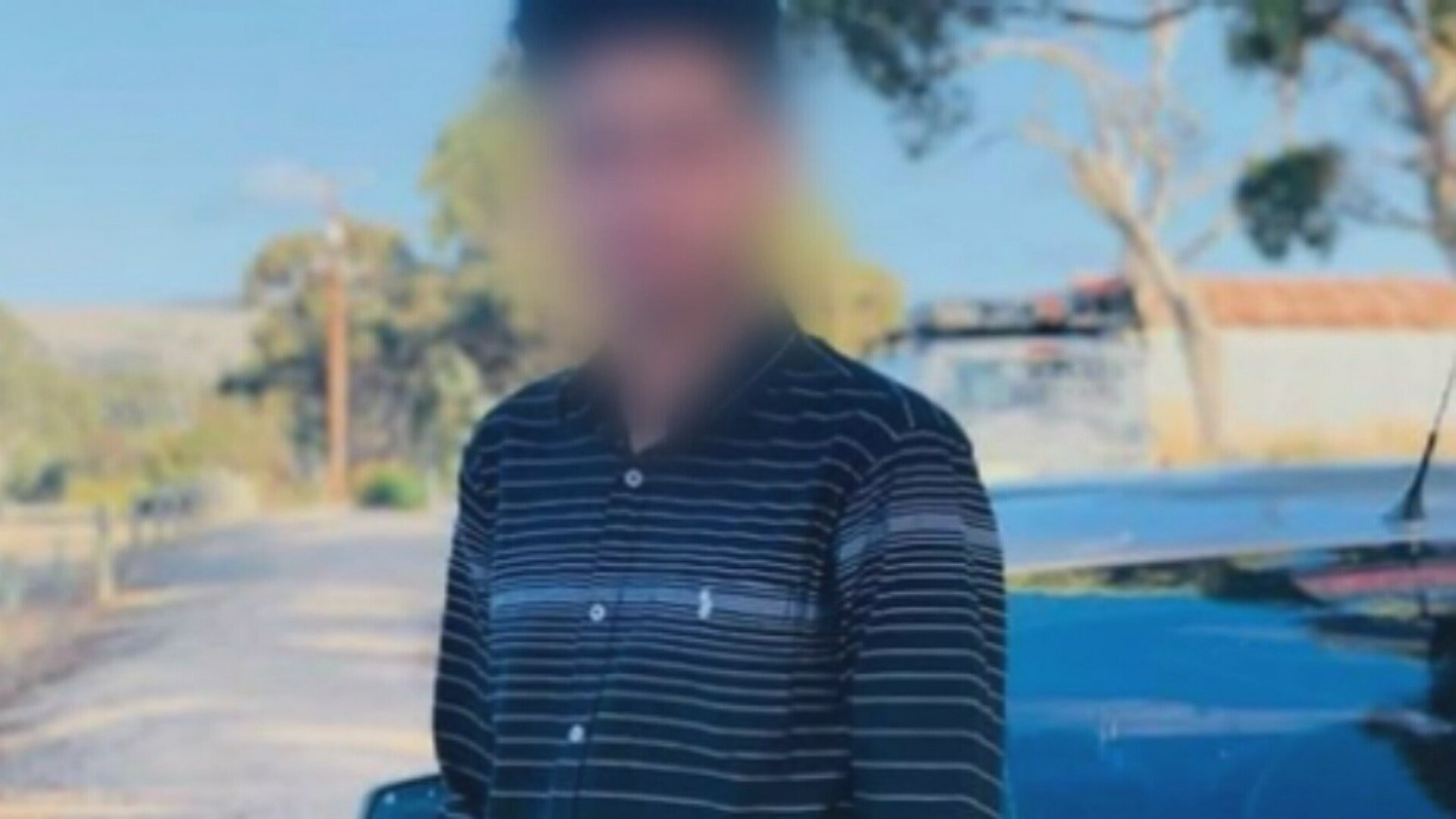 They say he was driving a 2009 blue metallic Commodore with the number plates S267CJ, which he had borrowed off a friend.

"We're ask anybody who might have seen either that vehicle, or a similar person loitering in the car park, apparently waiting for someone or in contact with Jasmeen," Detective Superintendent Bray said.

"It's also possible that people may have seen that person in the weeks leading up to her death attempting to make observations at those premises." 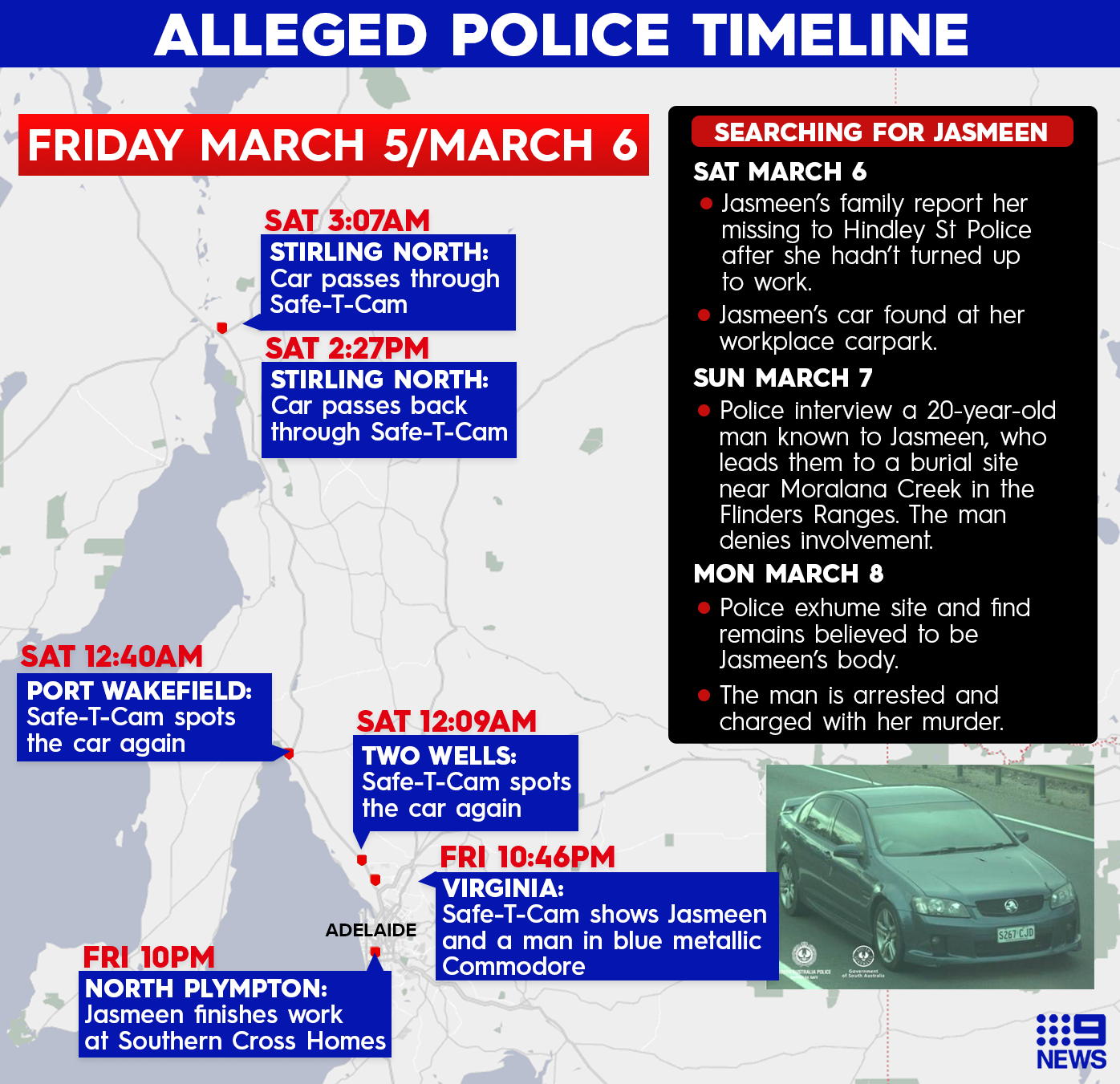 Police allege this car was then picked up on a Safe-T-Cam at Virginia, about 30 kilometres north from her work, at 10.46pm and that the car continued north along the highway to Willaston near Gawler.

"Now what we think happened there is that the offender has travelled down South Road, and missed the turn off at Virginia and has gone the wrong way, then done a U-turn, come back to Port Wakefield Road and commenced to travel north," Detective Superintendent Bray said.

Police allege that at 12.09 the Commodore passed through another Safe-T-Cam at Two Wells and another camera picked it up at 12.40am Port Wakefield. 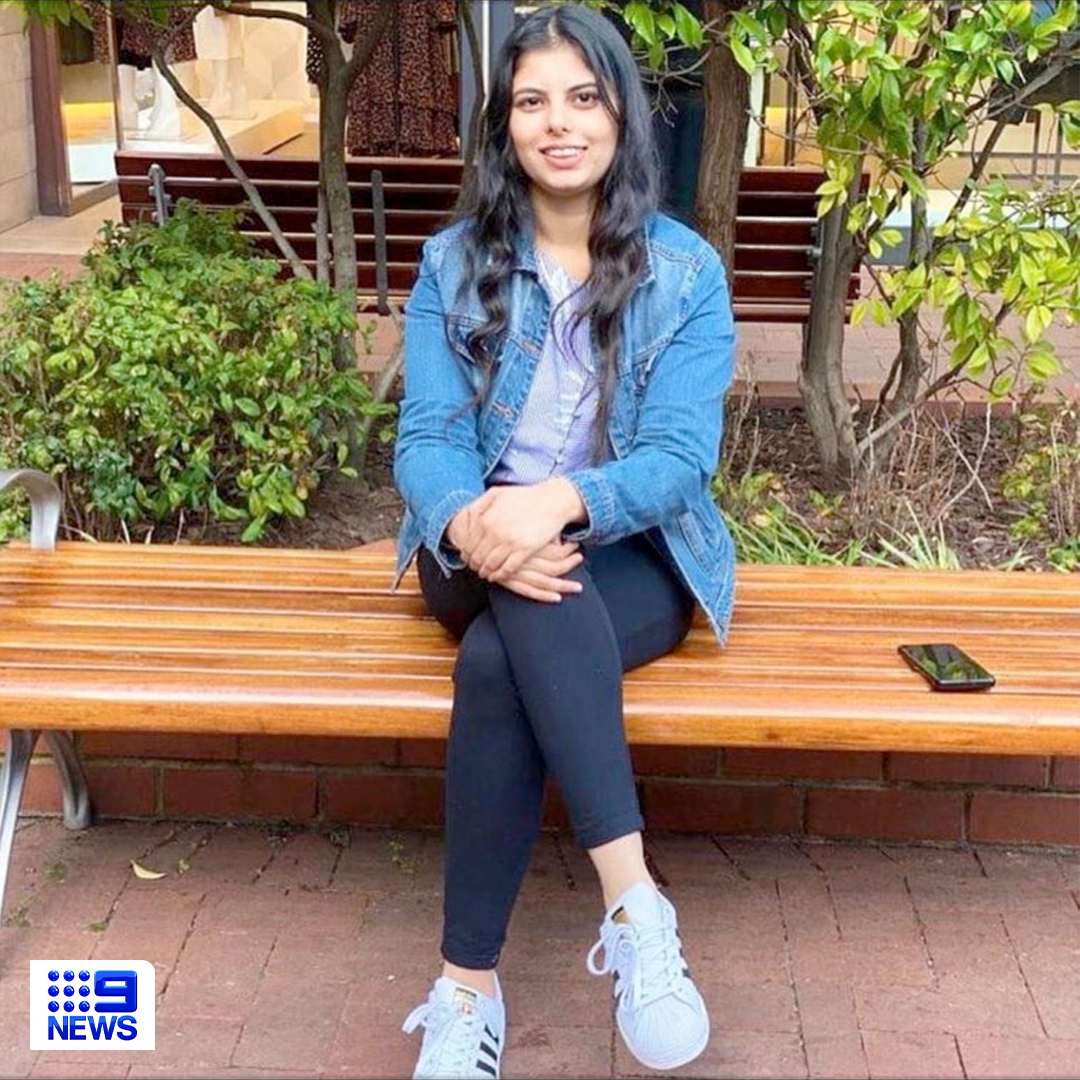 They then say that nearly three hours later the car is seen passing through another camera more than 300 kilometres away at Stirling North.

"A 3.07am the vehicle went through Safe-T-Cams Stirling North – this is particularly critical, we'd like to know whether in fact the offender immediately turned right to travel to the Flinders (Ranges) or whether perhaps went to a service station in Port Augusta to get fuel or drinks or the like," Detective Superintendent Bray said.

READ:  Trump Shunned Quack Coronavirus Cures For Himself That He Pushed On The Public

"There's no evidence at this stage to indicate he did but that's certainly something we'd like to know, if anybody possibly saw a young Indian couple or they may have just seen this young Indian male in that vehicle," he added. 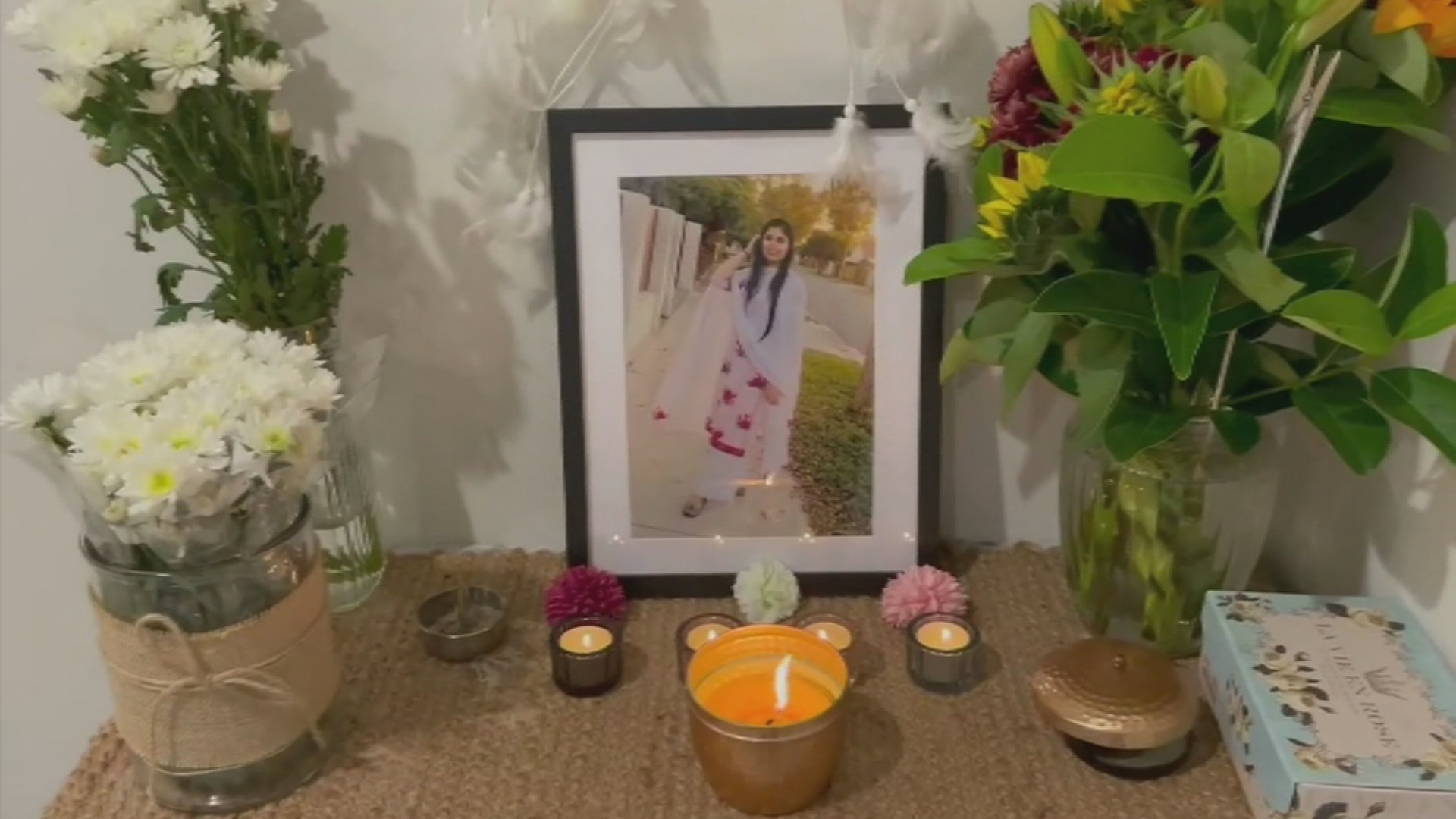 Police say that after that there is a gap or about 11 hours.

They allege that the car was next seen travelling back through the same camera at Stirling North at 2.27pm on Saturday March 6.

"And if you take out travelling time that leaves about eight hours to bury Jasmeen, and a considerable amount of time unaccounted for so we're trying to track where he went in that time," Detective Superintendent Bray said.

Detective Superintendent Bray alleges that police "know exactly how she died but we can't say."

Police also say that they are also aware of a motive, but they will not release that information. 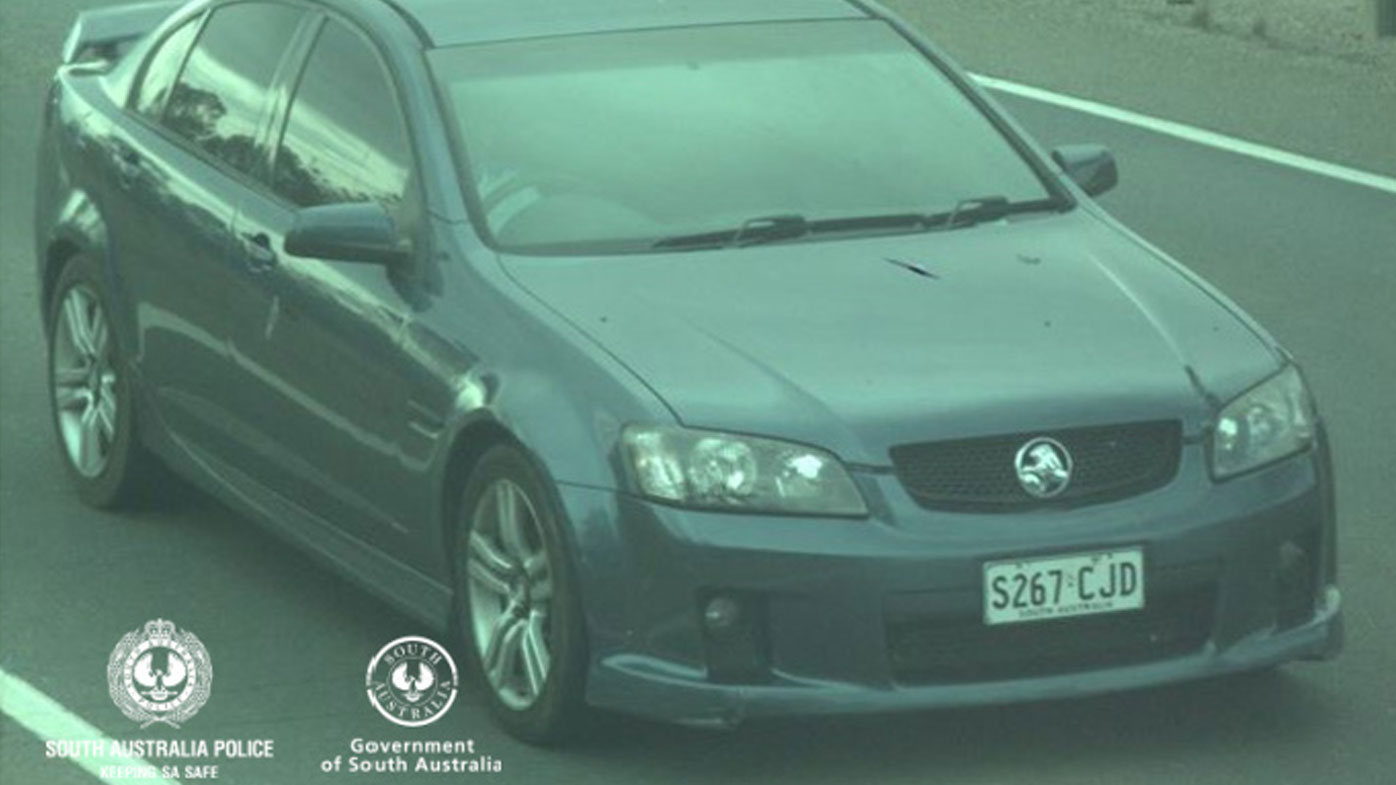 The man charged with her murder fronted Port Augusta Magistrates Court via videolink on Tuesday and denied killing Ms Kaur after leading police to her body.

He was initially charged with failing to report a death to the coroner, but the charge was upgraded to murder after Major Crime detectives arrived on the scene.

The court has suppressed the accused's identity while the investigation is ongoing.

He will remain behind bars until his next appearance in December.