Lifeguards in the US have stumbled upon a macabre find during an early morning clean-up sweep of a beach in Massachusetts.

Lifeguards in the US have stumbled upon a macabre find during an early morning clean-up sweep of a beach in Massachusetts.

Wellfleet Lifeguards posted on their Facebook page some of their crew discovered "a full spine of a marine animal." 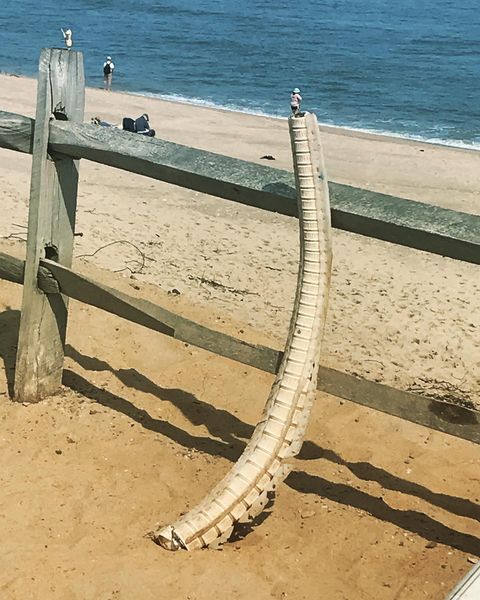 "Upon further investigation (aka googling) and consultation with a few friends of ours (aka marine scientists) who know a thing or two about sharks, it's likely this is the spinal column of a white shark, and a pretty large one at that," the post said.

The remarkably intact spine is about 1.5 metres long, with its broadest vertebra measuring about nine centimetres in diameter.

"We're sorry this guy had to perish, but happy that he (or she) left a little something behind as a message from the past about his (or her) visit to the Wellfleet Beaches," the post said.

Wellfleet Lifeguards co-head lifeguard Suzy Blake told USA Today's For The Win it was likely the spine had belonged to an animal that had been buried on the beach, and then uncovered during a recent storm.

Although sharks have cartilage endoskeletal structures, senior fisheries scientist for the Massachusetts Division of Marine Fisheries Greg Skomal told For The Win shark spines also contained a high level of calcium, which could help preserve them.