The impeachment trial of President Donald Trump will be the first such trial in US history to feature no witness testimony after Senate Republicans voted on Friday against hearing from any of the firsthand witnesses to the president’s conduct.Tru…

The impeachment trial of President Donald Trump will be the first such trial in US history to feature no witness testimony after Senate Republicans voted on Friday against hearing from any of the firsthand witnesses to the president’s conduct.

Trump was impeached by the House of Representatives on December 18 for withholding congressionally approved military aid from Ukraine in order to pressure the country into investigating a domestic political opponent, former Vice President Joe Biden, and for refusing to cooperate with the House’s investigation into that action.

Senate Republicans blocked efforts to subpoena new witnesses. The 51-49 vote came despite a report on January 26 that former national security adviser John Bolton would write in a forthcoming book that Trump specifically told him that he withheld military aid from Ukraine in order to obtain an investigation into Biden and his son Hunter. Bolton had said he would appear before the Senate to testify if subpoenaed.

But Senate Republicans had already planned to acquit Trump no matter the evidence before them. They refused to hear testimony from Trump’s closest aides. Before the trial even began, Senate majority leader Mitch McConnell said he would not be an “impartial” juror.

The failure to call witnesses in Trump’s impeachment trial comes after he refused to cooperate with the House impeachment inquiry, an act that led to the article of impeachment charging obstruction of Congress. While previous presidents fought congressional efforts to obtain documents during impeachment investigations, none made such a blanket denial of documents and witnesses as Trump did.

But enough Republicans stood by Trump to get him off the hook, making his acquittal almost certain. Two Republicans, senator Susan Collins of Maine and Mitt Romney of Utah, said they would vote to hear from witnesses. But late on Thursday, senator Lamar Alexander, also considered a swing vote, said he would vote against witnesses.

Alexander said he didn’t need to hear from them to know the bar for impeachment hadn’t been met, even though he suggested it was clear Trump did what he was accused of. He said in a statement that it “was inappropriate for the president to ask a foreign leader to investigate his political opponent and to withhold United States aid to encourage that investigation.” Senator Lisa Murkowski, also a swing vote, announced on Friday she would oppose calling witnesses. 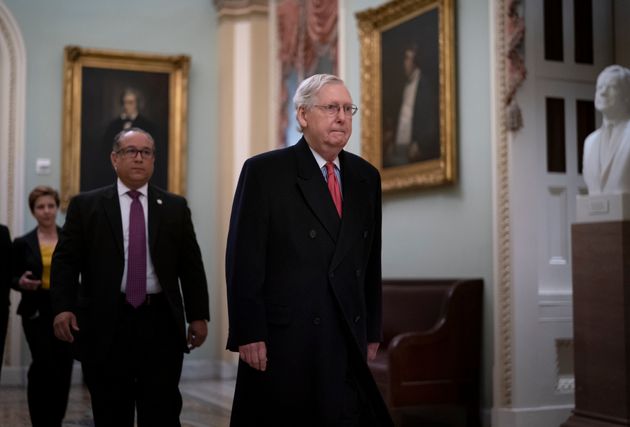 The Senate’s refusal to hear from new witnesses came after The New York Times reported that a manuscript of Bolton’s forthcoming book revealed that Trump told Bolton he was withholding aid from Ukraine in order to extract a promise to investigate Biden and a debunked conspiracy theory that Ukraine, not Russia hacked the Democratic National Committee in 2016.

Bolton “has relevant testimony,” Romney said on January 27. It is “increasingly apparent it is important to hear” from him, Romney added.

The revelations from Bolton’s leaked book manuscript would “strengthen the case for witnesses,” Collins said on January 27.

The votes of four Republican senators, however, were necessary to obtain a majority of 51 senators on a vote to call witnesses. That majority never materialised.

“I have concluded that, if the Senate issues a subpoena for my testimony, I am prepared to testify,” Bolton said in a statement on January 6.

The former national security adviser was reportedly opposed to the scheme that ultimately led to Trump’s impeachment. Fiona Hill, a former Russia expert on the National Security Council, testified that Bolton ordered her to tell White House lawyers that he was not involved in the effort by others, including Mulvaney, to link an official head of state visit to the White House by Ukrainian President Volodymyr Zelensky to the opening of investigations. Bolton referred to this scheme as a metaphorical “drug deal,” Hill told the House Intelligence Committee.

Bolton was a party to “many relevant meetings and conversations” about the president’s actions toward Ukraine, his lawyer said in November.

He could be the first witness to testify that the president explicitly said there was a link between the release of the military aid and an invitation to the White House and the announcement of investigations into the Bidens. Gordon Sondland, US ambassador to the European Union, previously told the House impeachment inquiry that he inferred the existence of this quid pro quo arrangement, but said he never heard that explicitly from the president.

Trump fired Bolton on September 10 after the two clashed over their conflicting views on a range of foreign policy issues including North Korea, Syria and Afghanistan.