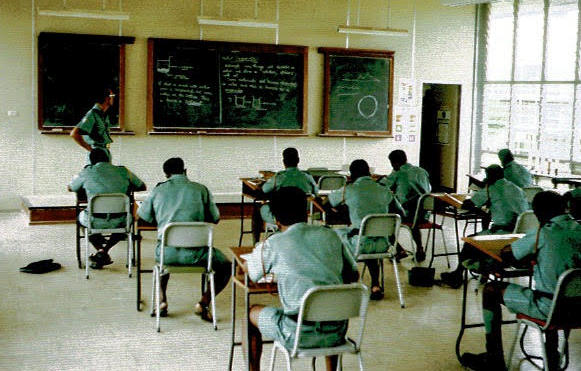 I could write numerous letters about PNG and Army life but I run the risk of boring you to tears, dear reader. In an earlier letter I told you about the welcome mat that was laid out at 2PIR for the newly arrived Education Corps Sergeants, of which I am one. But I didn’t tell […] 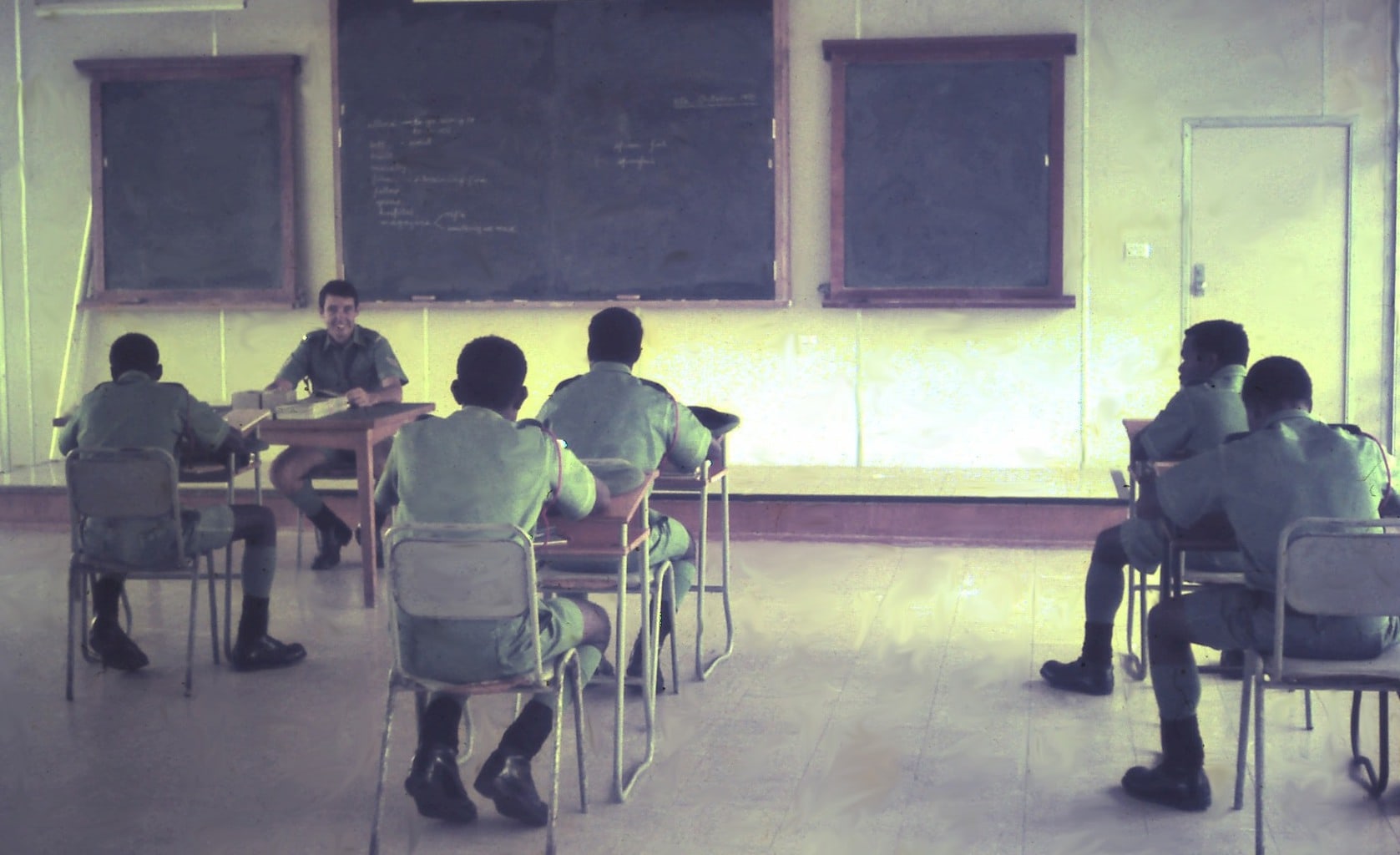 I could write numerous letters about PNG and Army life but I run the risk of boring you to tears, dear reader. In an earlier letter I told you about the welcome mat that was laid out at 2PIR for the newly arrived Education Corps Sergeants, of which I am one. But I didn’t tell you precisely what our responsibilities are.

We are here to teach the PNG soldiers in order to assist them improve their rank in the Army. In addition to that, because I have learnt to speak the Melanesian Pidgin language fluently I have volunteered to extend Army goodwill to the local civilian community. On a voluntary basis I teach at Wewak’s Primary School one morning each week. Additionally, I teach one night each week at the local calaboose. Beyond my Army teaching responsibilities my role extends to acting for soldiers whom encounter problems with the civilian law. Fortunately, Court appearances are few and far between.

The Education Corps occupies a large two-story complex including a library, storerooms, a seriously large breezeway, and an office for Captain Dumont the Officer in Charge. Upstairs are classrooms and offices for the Corps Sergeants.

Between my upstairs office at the front of the building and another group of offices overlooking the parade ground there are two classrooms. My class occupies one and my friend Sergeant Peters’ the other. I have a class of ten young soldiers and I am about to commence a series of lessons that will hopefully assist them in gaining promotion to Lance Corporal or Corporal status.

It rained in Wewak overnight and as the sun emerged from behind the early morning clouds the humidity level went into overdrive.

“Loosen your shirts and take off your boots,” I instruct my first English class.

There is obvious hesitation; this must be some sort of trick. “Come on, relax. I expect you to be as comfortable as possible in my class.”

Whether Captain Dumont, aka ‘Gus’, has a sixth sense or simply decides to check in on my first class I am not sure but he suddenly appears in the door frame, his cadaverous face has turned crimson.

“Sergeant d’Venables, I need to see you in my office immediately.”

I turn to the class. “As I said, make yourselves comfortable. I will be back in a few minutes.” 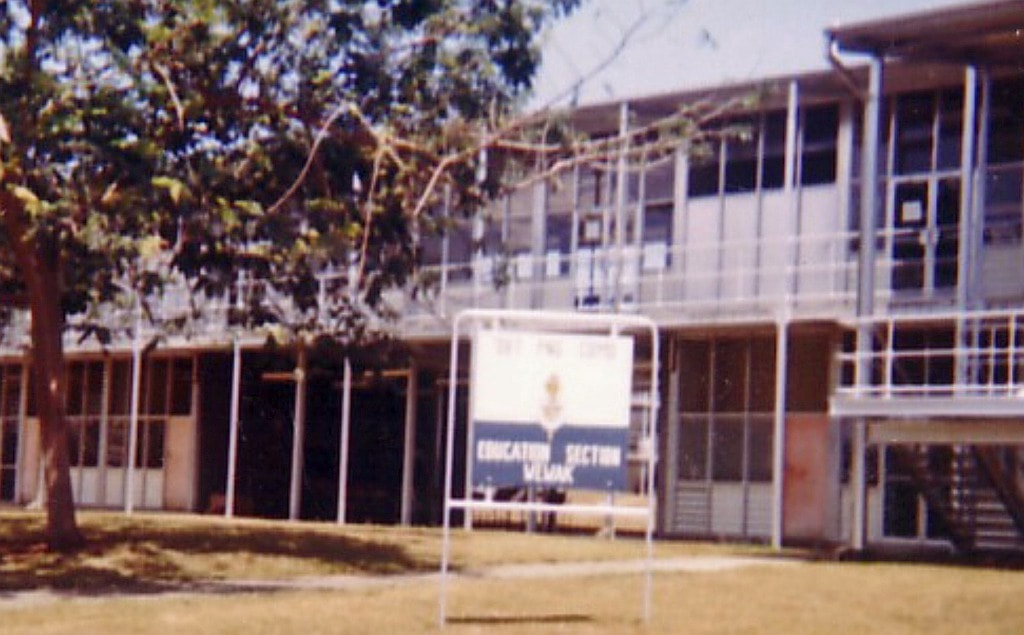 “What in the hell do you think you are doing?” Captain Dumont’s opening missive. “We have standards of dress in the Army that must be followed. No matter what, Army discipline is paramount. Give these black fellas an inch and they will take a country mile. How on earth do you expect to maintain control if you allow these fellows to dress in a slovenly fashion? How do you expect to earn their respect? We have a standard to maintain and I expect you to ensure that standard never drops whilst these fellows are under our control.”

Dumont appears to have concluded his rant and dismissively turns away, looks down at his desk and appears to contemplate his next project.

My internal temperature has risen sharply. I cannot allow his racist comment to slip by without a response; I detest racism. A deep breath. Dumont hears the intake of air, turns and looks up as if surprised to see me still standing in his office. He is about to be even more surprised at my retaliatory rant.

“I expect to earn their respect by having respect for them as human beings. That has nothing to do with the way they dress or the way the Army expects them to dress.” (I am on a roll) “I abhor racism.”

Surprise written across his face Dumont looks up from his Wewak Sailing Club racing schedule. I have his attention.

“The colour of their skin has nothing to do with their behaviour or the manner in which they react to being treated,” I continue. “They deserve to be treated with as much dignity as any other human being; as we would expect whites to be treated and in my class that is exactly how I will treat them.”

Silence. No response from the OC. Having dealt with the issue that made me really angry I turn to the reason for standing in front of Dumont like an errant schoolboy. 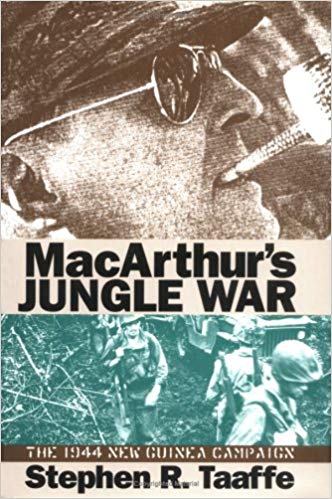 “Now, on the other matter.” Continuing confidently and without hesitating, glaring at a startled superior officer, “My class should be a comfortable learning environment. How can we expect anyone to learn when their ability to concentrate is diminished by their comfort levels? My primary purpose is to have those soldiers succeed. To do that they need to understand what we are teaching and that means they need to be in an environment conducive to clear thinking.”

As an afterthought I add, “You can be assured when they leave my class they will be dressed in a manner acceptable to Army standards.”

Captain Dumont simply stares at me. My barb about his racism draws no comment but eventually he says, “Well, remember to maintain standards and remember who the boss is.”

READ:  Fresh push for food scrap bins to be in every household

I’m not sure whether the last comment was gratuitous advice to ensure the soldiers are aware I am the boss, or whether it was directed at my lack of respect for him. Either way, I don’t care.

As I walk out of his office I hear loud applause from my colleagues upstairs and echoing over the intercom system – Captain Dumont had forgotten to turn it off.