Passengers on the Turkish airliner that crash-landed and crumpled into pieces in Istanbul, killing three, say the plane’s descent felt unusually fast and left those on board screaming and panicking.

Passengers on the Turkish airliner that crash-landed and crumpled into pieces in Istanbul, killing three people, say the plane's descent felt unusually fast and left those on board screaming and panicking.

Engin Demir, who was among the 180 people injured in the crash, told NTV television that he really noticed the speed as the Boeing 737 operated by low-cost Pegasus Airline landed at Sabiha Gokcen Airport yesterday.

Coming in amid strong winds and heavy rain, the plane overshot the runway. It skidded about 50 to 60 metres before dropping into a 30-metre-high ditch, according to the city's governor, Ali Yerlikaya. 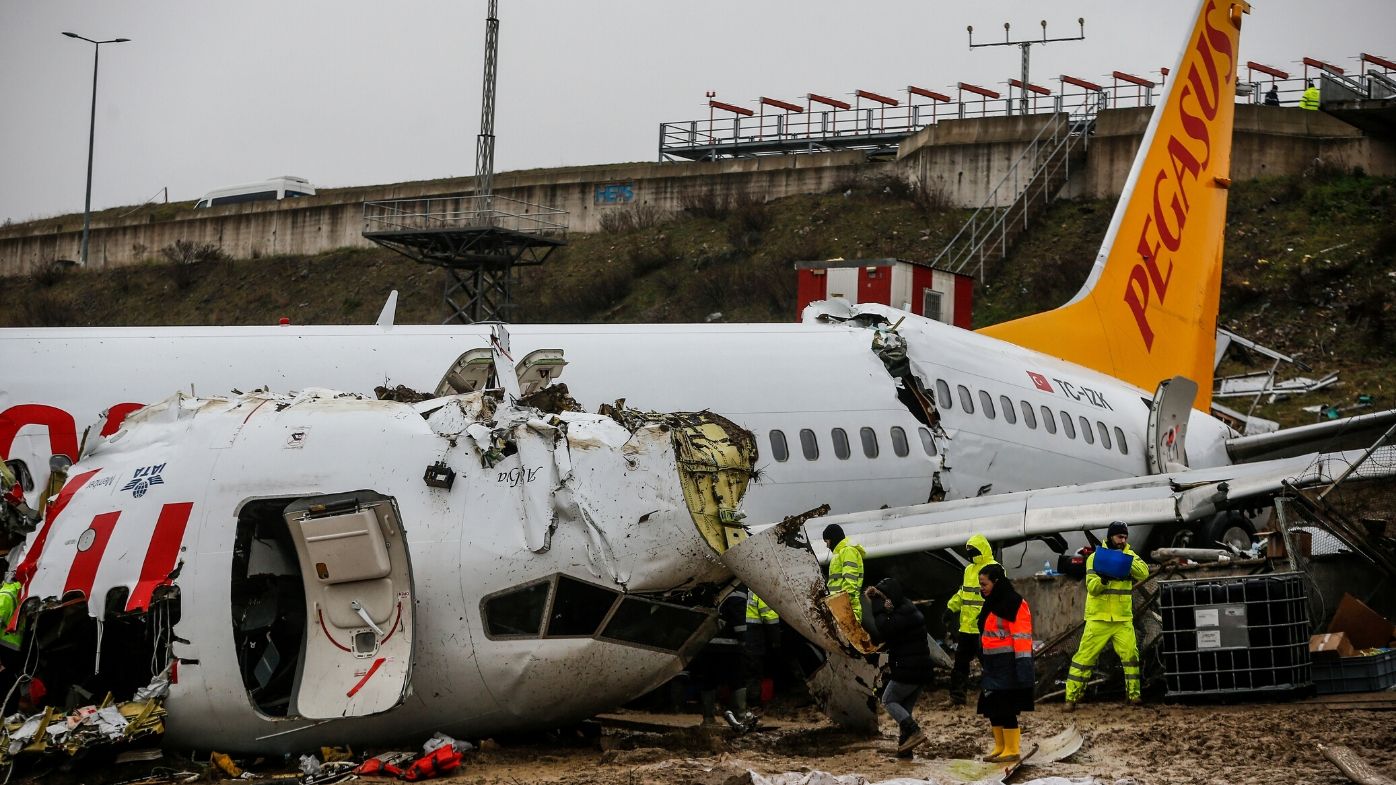 The 11-year-old plane broke into three pieces, forcing passengers to squeeze out through cracks in the plane's fuselage or climb onto its damaged wings.

"With the speed, I think it was not able to stop. It all happened in 2-3 seconds," Demir said from his hospital bed in Istanbul.

Demir said he was temporarily trapped by debris falling from the luggage compartment.

"There were screams and shouts. I tried to calm people around me. Help soon arrived," he said. 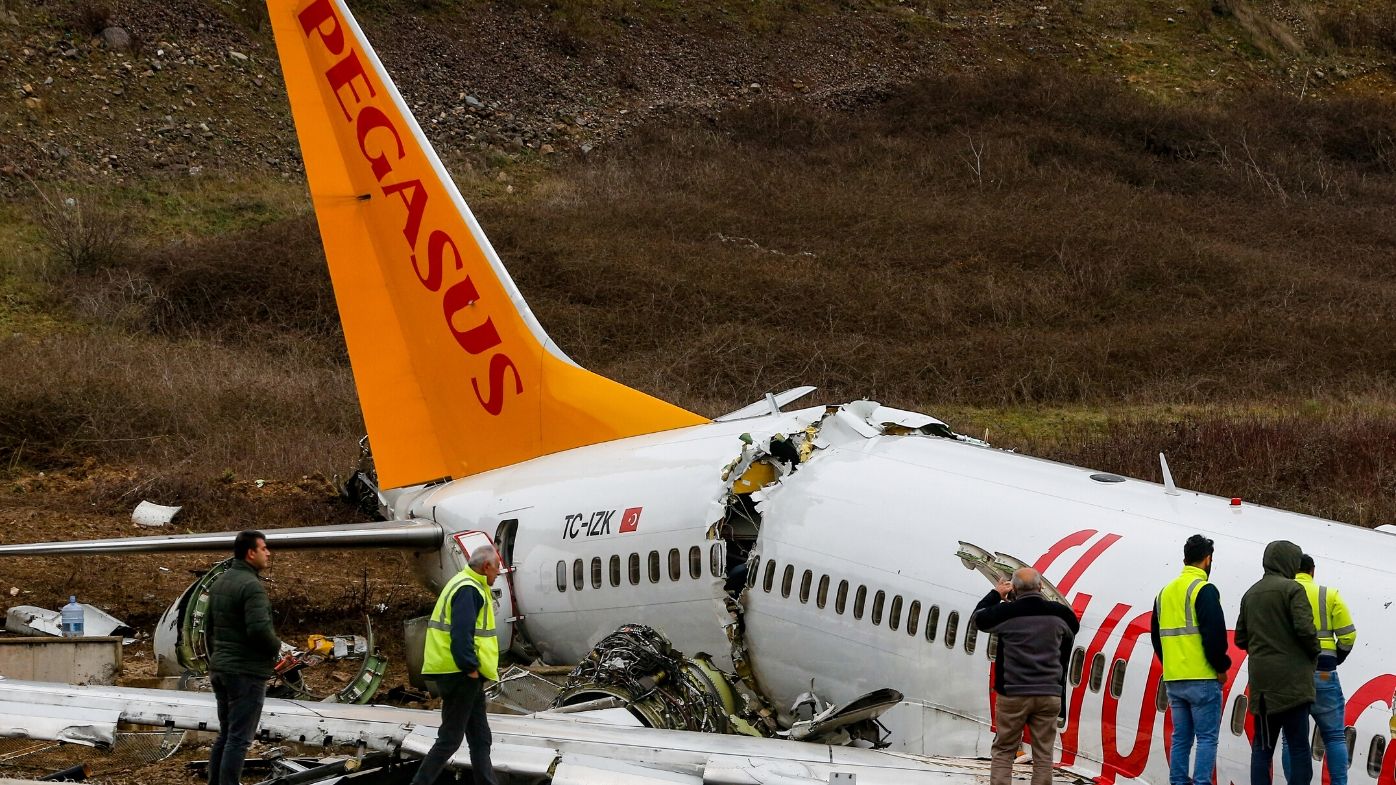 Another survivor, Alper Kulu, told the DHA news agency that the flight was "abnormal from the start to the finish."

"It was a very turbulent flight. The plane touched down with difficulty. It was very speedy compared to other flights," he said.

"A 'Welcome to Istanbul' announcement was made after the wheels touched down."

He said the plane suddenly swayed left and right, then dipped as it fell into the steep ditch. He said the impact of the landing flipped the fixed seats in front of him completely around. 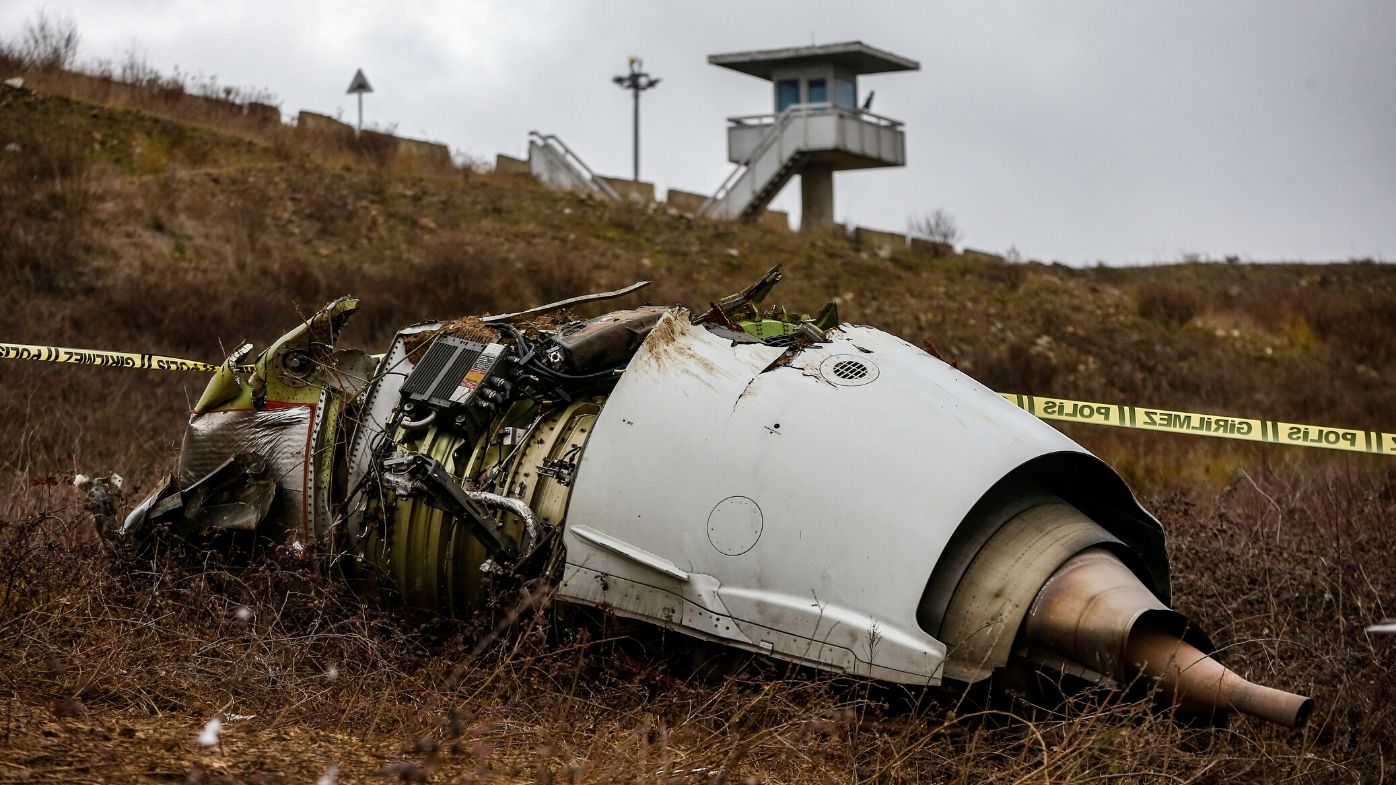 Despite a broken arm, he struggled to get out quickly and climb up the steep ditch, fearing the plane could explode in flames.

"There was panic and shouting. Everyone was calling for help," he said.

"I heard announcements that the plane could explode." 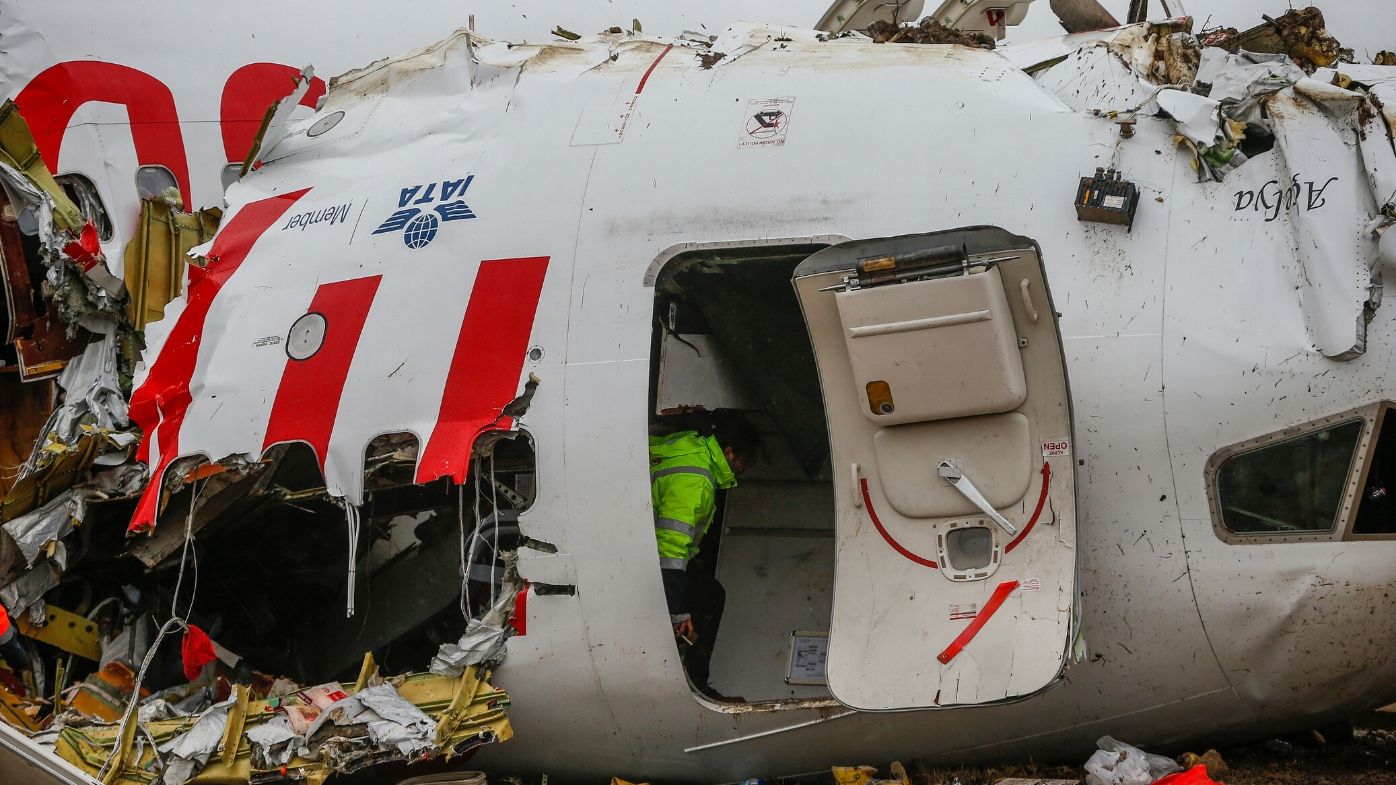 The plane, which carried 177 passengers and six crew members from the western Turkish city of Izmir, included people from 12 countries.

Investigators were looking at many possible causes, including speed and the weather.

Pegasus Airlines CEO Mehmet T. Nane told a press conference in Istanbul today that the plane's black boxes had been retrieved and were being deciphered.

Turkey's Anadolu news agency reported that prosecutors were taking statements from two air traffic control staff and two airport employees, as well as from pilots flying two other planes who decided to abort their landings amid bad weather at the airport shortly before the Pegasus flight. 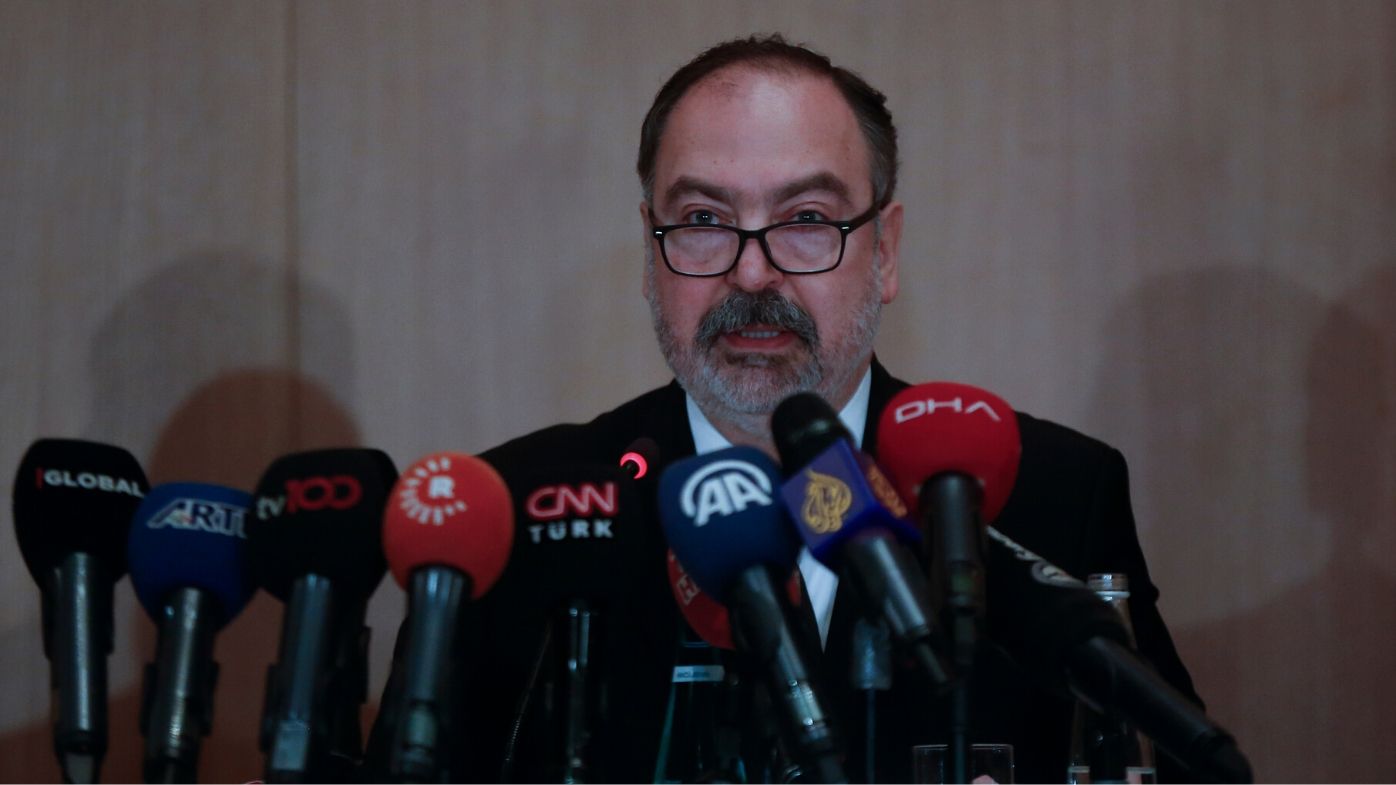 Anadolu said the co-pilot, who it identified with the initials F.P., was critically injured and was receiving treatment at the private American Hospital in Istanbul.

Dutch officials said the co-pilot was Dutch. The captain, identified as M.A., was also hospitalised but not as badly hurt.

Work continued at the crash site today as investigators examined the wreckage, crews took apart the plane's interior and police and the Turkish military guarded the site.

While crews pumped out the plane's remaining fuel, a group of insurance officials arrived to inspect the scene.

Flights resumed at the airport earlier today with some delays and cancellations.

READ:  Young boy injured after being hit by electric bike in Melbourne's east

The Pegasus chief was clearly affected by the tragedy.

"It's not easy to speak here when there are deaths, damages, injuries," Nane said, choking up. He said Pegasus will work to heal the wounds caused by the deadly landing.

"There are tons of questions. How did it happen? Why did it happen?" he said, adding that information would be shared by authorities and the company with the public when available.

Nane said the 180 injured were sent to 23 hospitals and 56 of them had already been treated and released. The Istanbul governor, Yerlikaya, said four of them had significant injuries.

Pegasus Airlines changed its logo on social media to a blackened version in a sign of mourning and said its "priority is to support the relatives and friends who have lost loved ones."

Nane said the company's pilots were "encouraged" and trained to avoid risks, do stable approaches, bypass landings if necessary and divert to alternative airports.

He said the airline safety's scores were above European Union standards.

The company is majority-owned by Turkish billionaire Sevket Sabanci and his family, with 34.5 per cent of shares floating in stock exchange Borsa Istanbul. Its fleet of 83 planes flies to more than 100 destinations.

Despite Nane's reassurances, Pegasus has had several recent instances of overshooting runways.

Another Pegasus Airlines plane skidded off the runway at the same Istanbul airport on January 7, causing the temporary closure of the airport. There were no injuries.

In January 2018, another Boeing 737 in the Pegasus fleet slid off a runway at Trabzon Airport in northeastern Turkey.

The plane came to rest in the dirt above the Black Sea with its nose pointed toward the water. No one was injured.