Scientists used ‘fake news’ to stop predators killing endangered birds — and the result was remarkable Animals, including humans, depend on accurate information to navigate the world. But we can easily succumb to deliberate misinformation or “fake news”, fooling us into making a poor choice. The concept of fake news came to the fore during […] 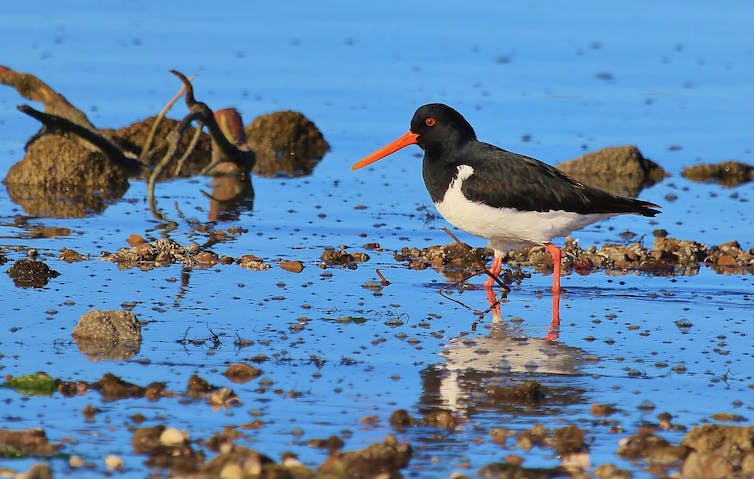 Animals, including humans, depend on accurate information to navigate the world. But we can easily succumb to deliberate misinformation or “fake news”, fooling us into making a poor choice.

The concept of fake news came to the fore during the term of former US president Donald Trump. It became so prevalent, it was named the Macquarie Dictionary’s word of the decade

In a new paper out today we show how a form of fake news can be deployed to help save vulnerable wildlife. We protected endangered shorebirds by spreading misinformation — in the form of bird smells — to deceive predators. This helped reduce the number of birds lost, without using lethal force.

To be honest, when we began working on the idea ten years ago it seemed a little crazy. But after seeing how fake news messes with the minds of both humans and animals, it now makes a lot of sense.

The problem with predators

The authors used ‘fake news’ odours to protect vulnerable birds and their offspring, including the banded dotterel, above. Shutterstock.

Introduced or ‘alien’ predators are species such as rats, cats and foxes, which have been introduced to new environments and kill local wildlife. If local species have not evolved with such predators — and so learned to evade them or ward them off — the damage can be devastating.

Alien predators have far more impact than native ones and are a major driver of extinctions. In Australia alone, cats threaten the survival of more than 120 listed species, while foxes threaten 95 species. In the South Pacific the threat is even greater.

But killing predators is a blunt and often ineffective tool. Too often, control techniques such as baiting, trapping and shooting can’t reduce predator numbers enough to protect vulnerable prey.

In other circumstances, lethal control may not be possible or socially acceptable. This might occur when the problem predator is a native species (such as foxes in the United Kingdom) or where alien predators such as feral pigs are also a food resource for local people.

In New Zealand, 59 bird species have become extinct since humans arrived and many more close to being lost. Introduced predators contribute substantially to this problem.

Predators such as hedgehogs, cats and ferrets were introduced to New Zealand in the 1800s. They are especially common in our study area, the braided riverbed landscapes of the Mackenzie Basin on New Zealand’s South Island. There, they eat eggs and kill endangered shorebirds such as banded dotterel, plovers, wrybill and the South Island pied oystercatcher.

The birds evolved with avian predators, and have learnt to hide from them by building camouflaged nests among pebbles on the river shores.

But this tactic does not work against introduced predators. Odours emanating from the shorebirds’ feathers and eggs attract these scent-hunting mammals, which easily find the nests.

Our research set out to undermine the predators’ tactics. We worked closely with Grant Norbury and others from Manaaki Whenua Landcare Research in New Zealand.

We distributed fake news — in the form of nest-like odours — that suggested to predators the shorebirds had begun to nest, even though they were yet to arrive.

First, we distilled odours extracted from the feathers and preen glands of three bird species — chickens, quails and gulls. In this case, any bird species could be used to produce the scent. (Watch a video of the process here). The result smelled a lot like a chicken coup or aviary — unmistakable to the human nose.

Five weeks before the shorebirds arrived for their breeding season in 2016, we mixed the odours with Vaseline and smeared the concoction on hundreds of rocks over two 1,000-hectare study sites. We did this every three days, for three months.

The predators were initially attracted to the odours. But within days, after realising the scent would not lead to food, they lost interest and stopped visiting the site.

The shorebirds then arrived at Mackenzie Basin at their normal breeding time, and began building nests and laying eggs. At control sites where our ‘fake news’ had not been deployed, the predators ate eggs and birds at the usual rate. But at sites where we put out unrewarding bird odours, the results were dramatic.

The number of nests destroyed by predators almost halved. As a result, chick production was 1.7 times higher at treated sites compared to control sites over the 25-35 days of the nesting season.

We wanted to be sure our results were not due to lower predator numbers or different behaviour in some areas. So the next year, we flipped treatments at our sites and got the same result.”

Our modelling predicts this fake news tactic would increase plover populations by about 75% over 25 years. By comparison, an absence of intervention would lead to a population decline of more than 40%.

Our results show the profound conservation potential of fake news tactics. The approach cost no more than a traditional lethal control program and delivered comparable benefits.

We hope the work will encourage others to consider manipulating the behaviour of introduced predators when lethal control options are too difficult or ineffective.