A team of scientists are drilling into the Earth’s core to try and predict our future.

Last month, floating in the ocean south of New Zealand, a team of scientists were investigating the end of the dinosaurs and trying to predict the future.

They were unspooling Earth's history, raising up sections of sediment and ancient rock from beneath the South Pacific. With these samples, scientists are probing some of our most longstanding, and most urgent, questions: What happened in the wake of the dinosaurs? What happens to life when the planet dramatically warms or cools? Can millions of years of Earth history tell us where we are heading? 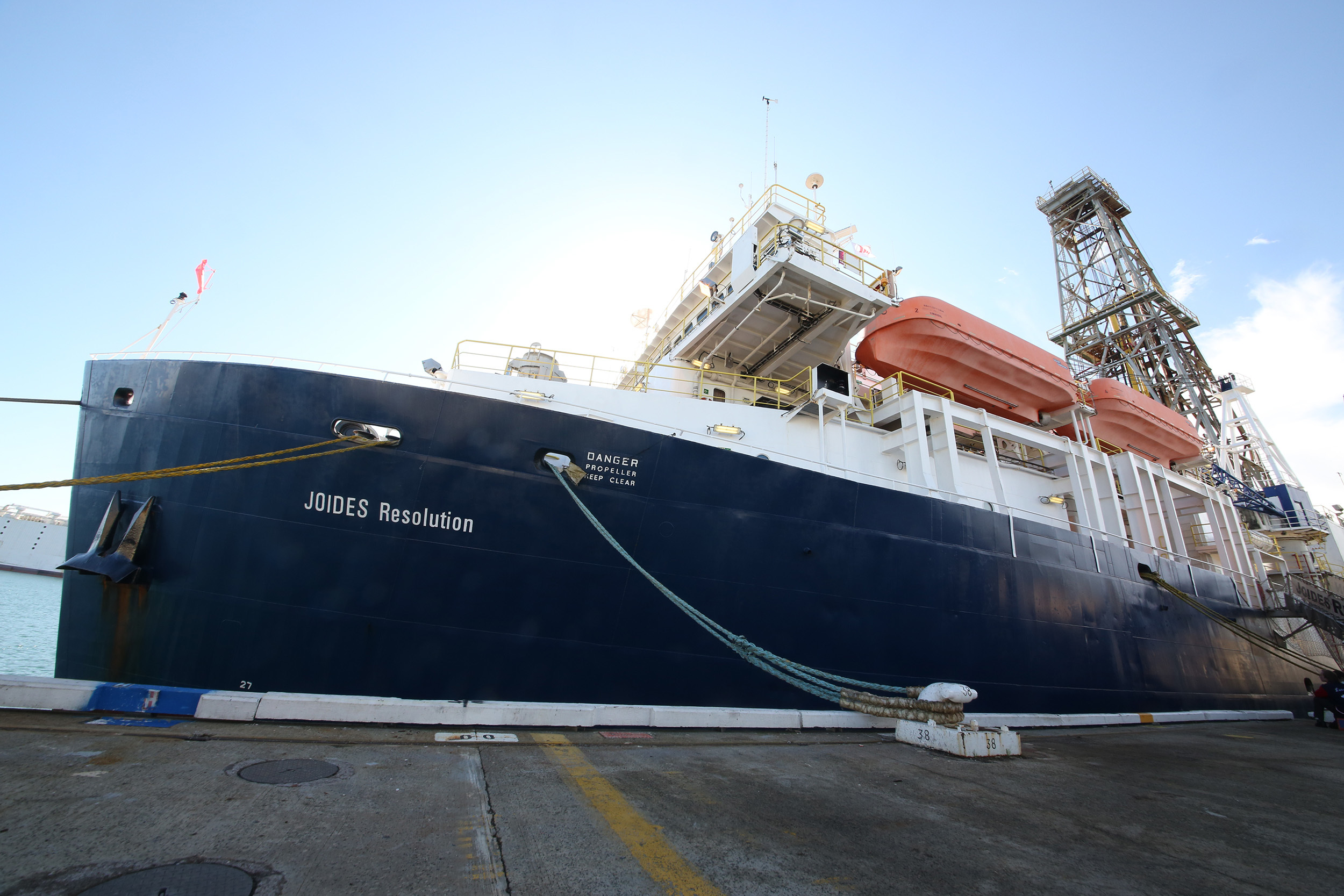 The abyss may hold the answers

"The workings of the oceans, the Earth's environment and climate are all recorded in the sediments," explained Anthony Koppers, a professor of marine geology at Oregon State University.

Drill beneath the sediment on the sea floor and you hit the oceanic crust. One advantage of drilling into oceanic crust is it's approximately seven kilometres thick, while on land it is much thicker, explained Koppers. That allows scientists to sample closer to the Earth's mantle.

"You're learning about how the world works at a planetary scale," he added.

"There's a fundamental question about the origin of life on Earth, and then (by) extension, to any other planet."

Scientific ocean drilling took off in the late 1950s and early '60s with Project Mohole, a US attempt to drill to the base of the crust. It didn't get close - drilling 183 metres - and to date the deepest a scientific vessel has drilled beneath the seafloor is 3250 metres, by Japanese ship Chikyu in 2019. 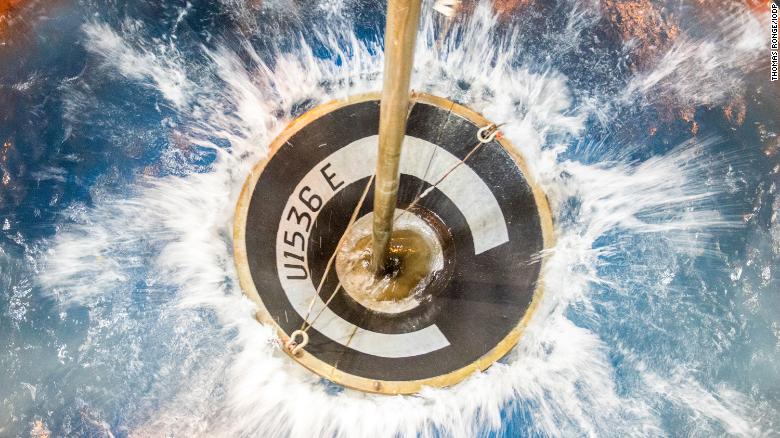 The moonshot of drilling through to the upper mantle remains a way off, but Koppers cautioned against fixating on the numbers game: "drilling a deep hole -- it's not that interesting. It's what we can answer with that".

Ocean drilling has provided evidence of the theory of plate tectonics (the movement of the plates comprising Earth's rocky outer layer); revealed the Arctic once had a subtropical climate; discovered frozen methane hydrate, a flammable ice; found microbial life deep beneath the sea floor.

"We have only been chipping away at the very, very top surface," he said.

"Over 50 years, we've gradually got a little bit more insight, and actually it has caused way more questions than answers."

Now Koppers and the scientific ocean drilling community is laying the groundwork for a literal breakthrough. 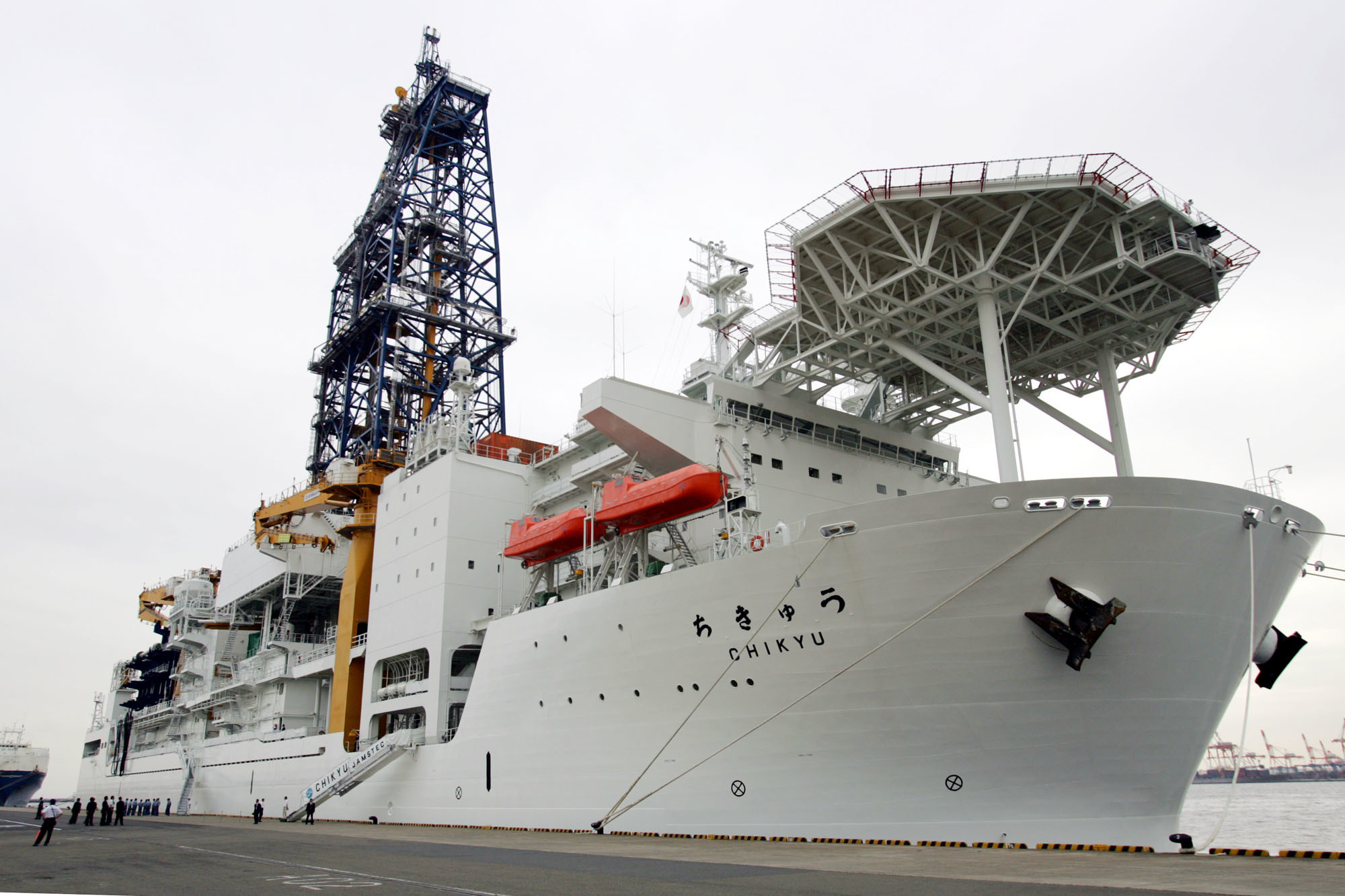 "Something every paleoceanographer dreams of"

For decades, the JOIDES Resolution, a 41-year-old ex-oil drilling ship, has served as the community's primary vessel for deep ocean drilling.

Conducting research for the International Ocean Discovery Program (IODP), the Resolution's last mission had it floating above the Campbell Plateau south of New Zealand.

Among the crew of 118 were Laura Haynes, a sedimentologist and post-doctoral fellow at Rutgers University, and Elizabeth Sibert, a physical properties specialist and junior fellow at Harvard.

"Sailing on the JOIDES is something that every paleoceanographer dreams of," said Haynes. "I've been waiting for an opportunity ... for almost 10 years," Sibert added.

Working seven days a week rotating 12-hour shifts for 60 days, it was no cruise for the 30 scientists at sea.

"There are no breaks, there are no port calls, there's no alcohol on board," Brad Clement, director of science services at the IODP said.

Drilling takes place all hours, with 9.5 metre long core samples hauled to the surface for immediate analysis. Cores are then split lengthways and stored in a refrigerator for use in further research.

Koppers says the ship can penetrate through around seven kilometres of sediment in a two-month period, although "you're lucky (to) get a kilometre" through the harder crust.

The team drilled down far enough to see evidence of the Paleocene-Eocene Thermal Maximum, a global heating event that occurred approximately 55.5 million years ago and, Haynes said: "our best analog to anthropogenic climate change".

Ms Sibert said part of the expedition's mission was "to understand how life responds to major global change, such as rapid global warming or cooling, and mass extinction."

She has already been involved in a study on a mass extinction event - that of the dinosaurs – published early 2020 using cores extracted in 2012.

It found compelling evidence to support the theory that the dinosaurs were wiped out after an asteroid impacted near the Yucutan, in Mexico. 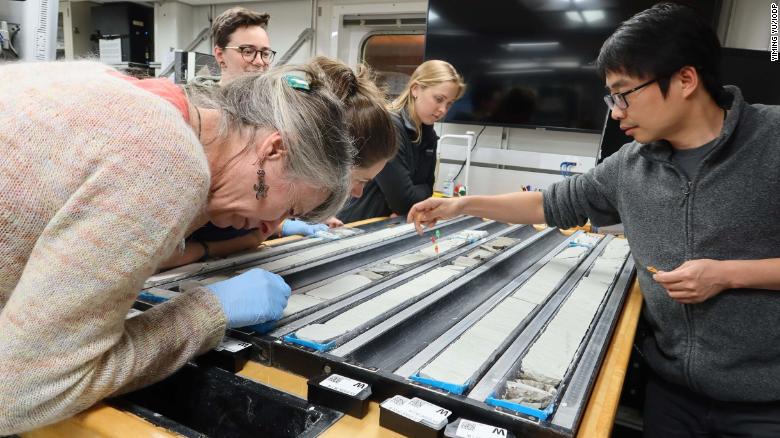 Elsewhere, knowledge gaps abound. For example, how carbon dioxide interacts with the subseafloor and mantle, Professor Koppers said. Understanding that could help determine what role the oceanic crust could play in future carbon sequestering.

Among the initiatives planned by the IODP for the next three decades is probing the deep Earth -- the moonshot of hitting the upper mantle being one goal.

Professor Koppers estimated it would take "a year, if not more" to drill through seven kilometres of crust. Multiple sites, including one close to Hawaii, are being discussed.

"The challenges when you get to those depths (are) the temperatures are very high and the pressures are very high. So, every time you try to pull the pipe out to change the bit, the hole seals itself back up," Mr Clement explained.

But all of that is still to come. Meanwhile, the Resolution is heading to port loaded with over 900 metres of core. Immediate finds by the crew will give way to the slow churn of peer-reviewed research.

Ms Sibert said the team is excited to delve into evidence of the start of the Cenozoic Era, 66 million years ago, after the "reset button" of the dinosaurs' mass extinction, as well as the Eocene-Oligocene Boundary, "when ice sheets became a permanent feature on Antarctica."

"(We've) found a number of things we weren't expecting," she said.

"With ocean drilling, you never really know what you're going to get until it comes up on board."