A fraudulent email claiming to be from Coca Cola is telling recipients they won the equivalent of more than $2,300,000 in prizes.

A fraudulent email claiming to be from Coca Cola is telling recipients they won the equivalent of more than $2,300,000 in prizes.

The email sent to an unknown number of recipients asks people to send personal information to a suspicious email address in order to claim their prize. 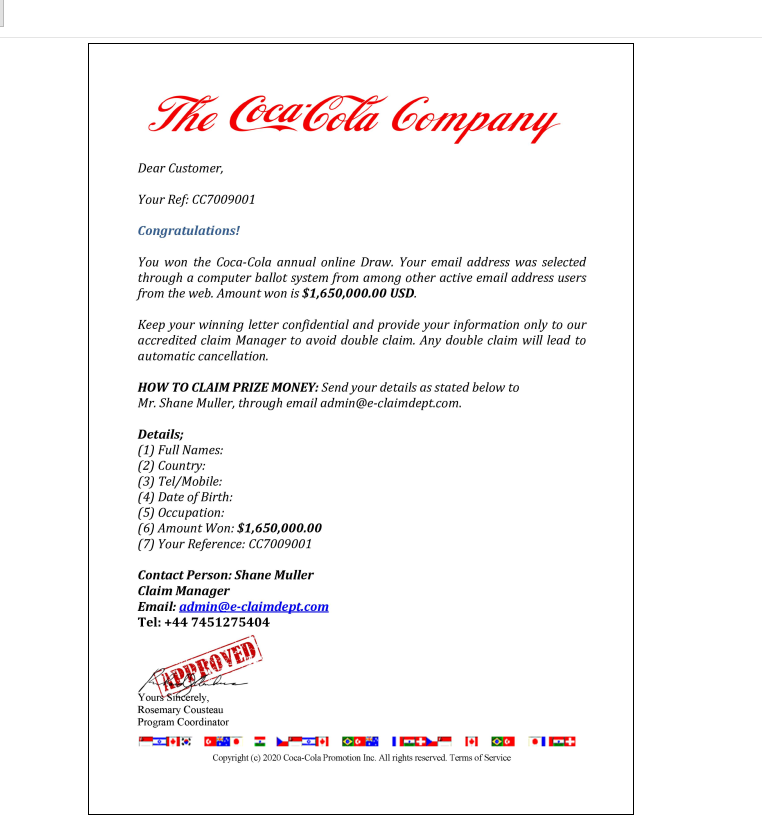 "You won the Coca-Cola annual online Draw. You email address was selected through a computer ballot system from among other active email address user from the web," the email states.

"HOW TO CLAIM PRIZE MONEY: Send you details as stated below to Mr Shane Muller through email admin@e-claimdept.com"

The email asks recipients to include their full name, country, mobile number, date of birth and occupation.

After being made aware of the scam by nine.com.au, Coca Cola confirmed the email was fraudulent.

"Coca-Cola South Pacific is aware of a fraudulent letter which claims to be offering 'prize money' from Coca-Cola.  The letter is not genuine and this offer did not come from Coca-Cola or anyone associated with the company. We have advised the authorities of this apparent scam," it said in a statement.

Anyone who has received the email and is concerned should contact Scamwatch.