Samsung has made its best foldable phone ever. So why is it so hard to recommend?

Samsung has made its best foldable phone ever. So why is it so hard to recommend?

Inside you get a huge, 7.6-inch display that improves on the original in almost every way. Gone are the thick bezels and that chunky camera module, which has been replaced by the tiny hole-punch selfie camera we've come to expect from Samsung.

That plastic protector which notoriously broke several screens on the original Fold is still there. However, it has been extended to the very edge of the screen and almost unnoticeable. As is the crease at the centre of the Fold2.

You can still see the crease at certain angles but when looking at the phone straight on, the crease fades into obscurity.

The internal AMOLED display has also been upgraded to 120Hz (think 120 frames per second). It's super responsive and doubles the 'smooth' you'd expect when scrolling on an iPhone. In 2020, 120Hz is a must for touch-screen gaming.

Impressive as the main screen is, Samsung's most important upgrade has arguably come for the screen you use when the phone is closed. 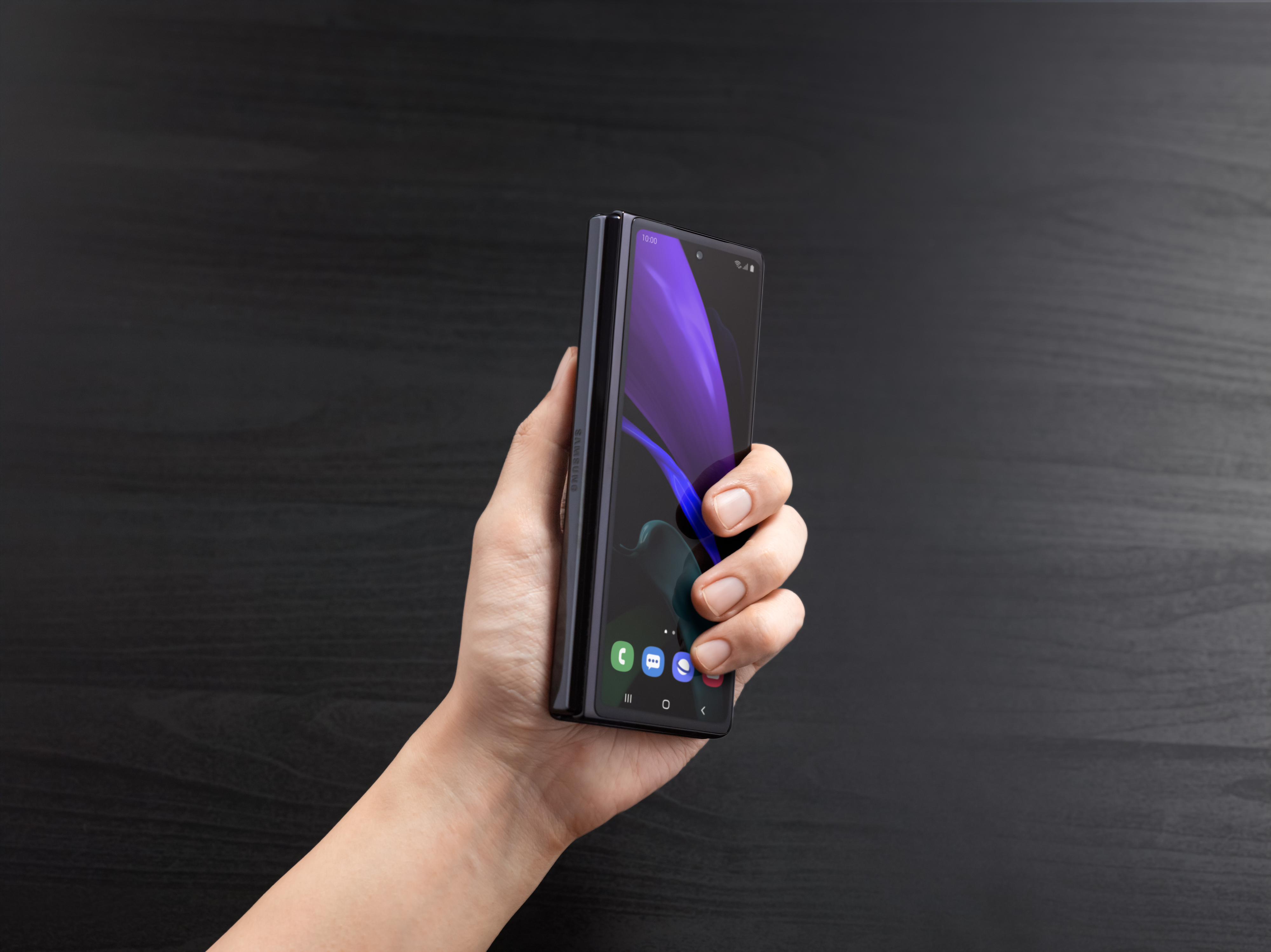 Gone is the miniscule, impractical option that donned the front of the original Galaxy Fold. The Fold2 gets a full-scale 6.23" display that makes using it like a normal phone doable. It's a much thinner display than most will be used to and my fat thumbs did struggle to text as accurately as I'd like. Here is where Samsung's problem lies.

When closed, the Fold2 is too narrow. When unfolded, it's too wide.

The Fold2's biggest strength is also its biggest weakness and a constant reminder that foldable phone design is still a work in progress.

Many apps, including Samsung's own camera app, don't fill the main screen. Others, like Instagram, don't scale properly or at all. Information is cut out on the thin screen or surrounded by fat black bars on the main screen.

Few apps take advantage of the phone's new flex mode too. One that does is the camera, which allows you to take photos and scroll through the gallery at the same time on different halves of the screen, by partially opening the phone. It's an interesting feature, but again, not fully realised. Video should be a strength of any tablet, but wide screen movies barely fill 50 per cent of the main screen due to its unique aspect ratio. Films are 'bigger' on the screen of Samsung's Note20 Ultra than the Fold2, which is bizarre.

Where the Fold2's 7.6" display excels is multitasking. Backed by the new Snapdragon 865 chipset, the Fold2 easily handles multiple apps at once and has been incredibly handy on the road while trying to respond to emails while watching Daniel Andrews' daily Covid press conference. But committing to the Fold2 as your everyday phone is a big ask if you don't carry a handbag. 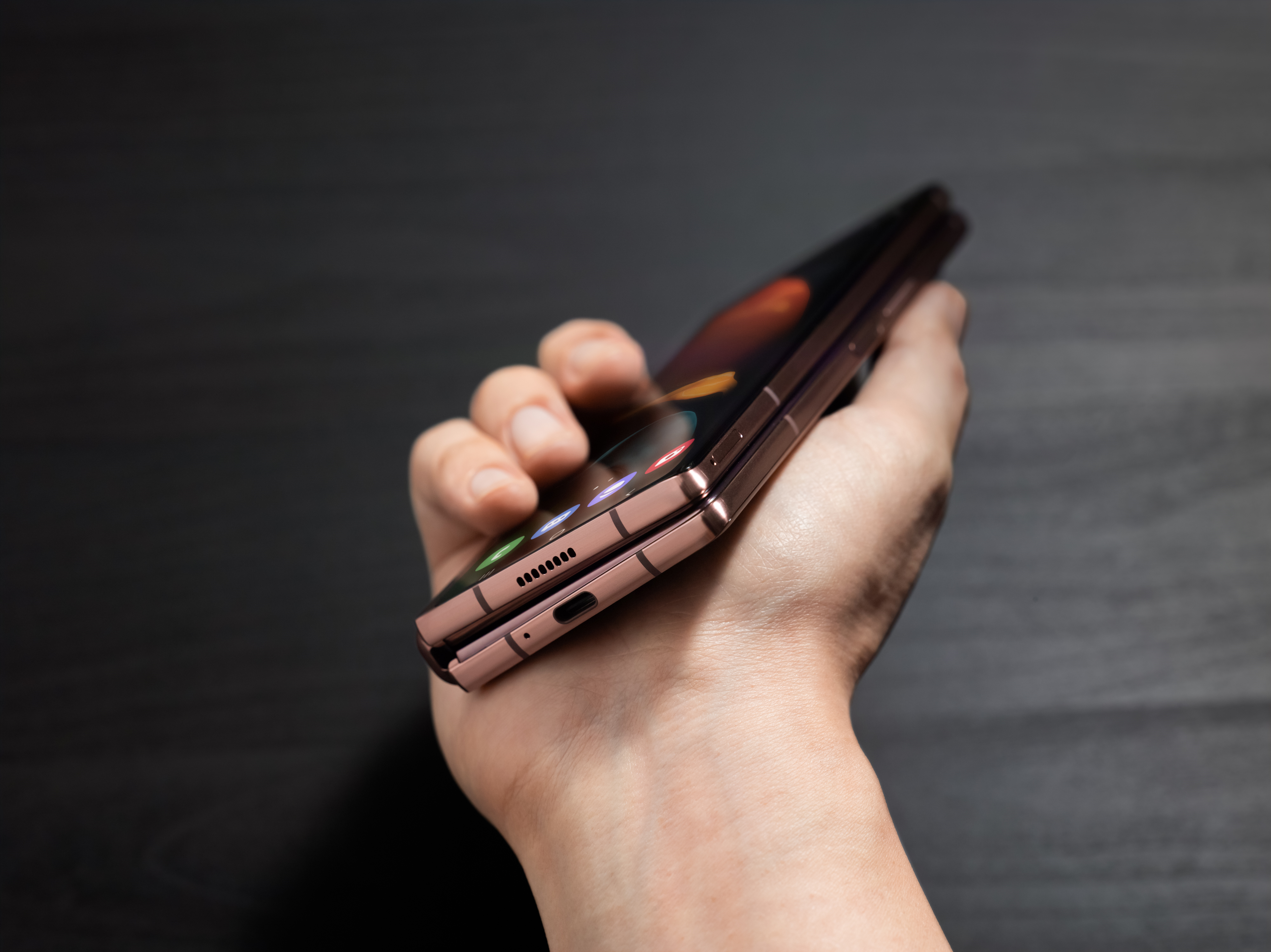 The Fold2 weighs a whopping 282 grams, and due to its chunky design can feel like a brick in your pocket. It's so heavy that I wouldn't dare take it for a run unless it's protected by a zip for fear of it bouncing out.

After Samsung nailed the design of the much smaller Z-Flip, it's also astounding that the Fold2 doesn't fold flat. There's still the smallest gap when closed which is easy to ignore, but holds back its design.

That being said, Samsung has nailed what premium design should feel in your palm. The matte metal finish on the back of the Fold2 sets the standard for every other high-end phone and is genuinely striking.

Every person I've shown the phone to has been wowed. They immediately want to get their hands on it, unfold the main screen and marvel at the possibilities of our foldable future. The novelty of foldable screens has far from worn off.

I love the fact that Samsung can experiment with this technology so publicly. The company knows it hasn't struck a perfect balance between practicality and price, but doesn't care. It knows there's an audience out there, no matter how niche, who will hang on every little improvement.

Speaking of, the hinge in the Fold2 has also been bolstered. It's now strong enough to hold at every angle between closed and completely open, which comes in handy if you want to prop the phone up for something like a video call.

But for all its improvements, the Fold2 is still not dust or waterproof. A big warning appears when you first turn the phone on which also warns that using a pen or fingernail could dent or damage the internal screen. It's by no means, a deal-breaker, but it has to be mentioned.

READ:  Appeal to find loved ones after roadside memorial removed for highway upgrade

Finally, the camera. The Fold2's camera module has been greatly streamlined. Similar to the Galaxy S20, the Fold2 features three-cameras: wide, ultrawide and telephoto lens. All are 12 megapixels, which falls short of the 64MP telephoto lens on the S20 and the 108MP sensor on the S20 Ultra. As a result, optical zoom on the Fold2 is limited to just 2x, as opposed to 5x on the Note20 Ultra and 10x on Samsung's top-of-the-line S20 Ultra.

The cameras shine brightest when partnered with the Fold2's unique layout. Thanks to the outside screen, you can take a selfie using the main cameras with ease.

So all things considered, who is Samsung's Galaxy Fold2 5G for?

It is expensive, but isn't Samsung's most powerful phone.

Its design has taken huge leaps forward, but isn't perfect.

I personally prefer the design of the Z-Flip to the Z-Fold, but they're doing very different things.

The Fold2 and Samsung's "phablet" design is running its own race. There's nothing else quite like it and investing in the technology now will put Samsung ahead in future.

The question for us at home remains the same: are you willing to spend $2999 to get in early on an impressive novelty, or wait until the creases (pun intended) are ironed out.