James Murdoch, the son of News Corp Chairman Rupert Murdoch, and his wife, Kathryn, unleashed fierce criticism on Tuesday over the handling of climate change and environmental issues by the media titan’s slate of conservative news outlets.

In a statement to The Daily Beast, a spokesperson for the couple said the Murdochs were “disappointed” with what they called “ongoing denial” at both Fox News and the broader News Corp empire, which owns much of the media outlets in Australia. The country is currently fighting a scourge of devastating bushfires that have left at least 28 people dead and scorched more than 15 million acres.

“Kathryn and James’ views on climate are well established and their frustration with some of the News Corp and Fox coverage of the topic is also well known,” the spokesperson told the Beast. “They are particularly disappointed with the ongoing denial among the news outlets in Australia given obvious evidence to the contrary.”

The statement is a rare public rebuke of Rupert Murdoch’s empire from one of his closest family members. News Corp has been accused in recent weeks of trying to downplay Australia’s deadly fire season within the Australian media while promoting misinformation about what has caused the disaster.

Scientists and fire officials have called on the Australian government to do more to address climate change as the fires rage on. Climate change doesn’t cause wildfires, but it can exacerbate conditions, experts say. Australia has seen a particularly hot and dry fire season, and 2019 was the country’s hottest and driest year on record.

News Corp has rejected assertions that it’s fuelling climate change denial, telling The New York Times that its coverage “has recognised Australia is having a conversation about climate change and how to respond to it.” The company said, however, that disputed claims of arson, which diminish the role of climate change, were “legitimate stories to report in the public interest.”

Murdoch has said publicly that he is a climate change “skeptic” but not a denier. He also said last year there were no “climate change deniers” working within News Corp.

Rupert Murdoch and News Corp have donated millions of dollars to bushfire recovery efforts, as has his other son, Lachlan.

It’s not the first time the younger Murdoch has criticised the conservative media titan. In September, James Murdoch said there were views aired on Fox News that he “really disagree[s] with.”

“The connective tissue of our society is being manipulated to make us fight with each other, making us the worst versions of ourselves,” James Murdoch told The New Yorker in an interview. 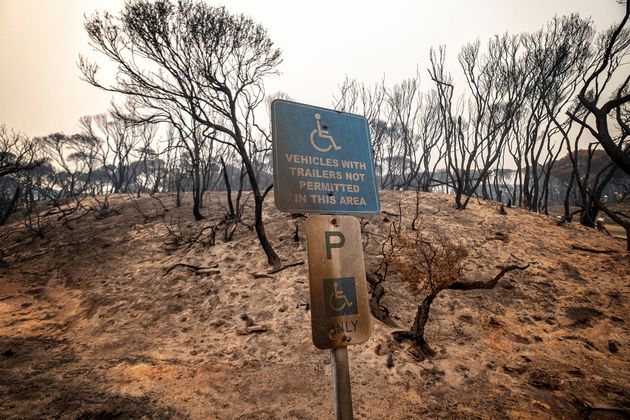 Kathryn Murdoch has worked for more than a decade on climate issues and has recently taken a more high-profile role in fighting climate change. In an interview with The New York Times in September, she said she had been motivated by the urgency of the global warming crisis to increase her activism and had decided to “switch everything I was doing.”

“I wanted to be able to look my children in the eye and say, ‘I did everything I could,’” she said at the time.

James Murdoch left his role as the CEO of 21st Century Fox early last year after Disney acquired its film and television assets. His brother, Lachlan Murdoch, was chosen to lead what remained as part of the newly minted Fox Corp.

Lachlan Murdoch has repeatedly come to the defence of Fox News. During an interview in 2018, he said he was “not embarrassed” by the network “at all,” saying the cable news channel served a purpose in the US discourse.