A member of a broadcast team arriving in Melbourne on an Australian Open charter flight is the fourth person linked to the tournament to test positive.

The number of confirmed coronavirus cases linked to the Australian Open has risen to four after a member of a broadcast team tested positive to COVID-19 after arriving in Melbourne on a charter flight.

"We take all breaches really seriously. For the players, that is a fine of up to $20,000, a warning from the police," Ms Cassar said.

The four infected people - none of whom are players - arrived across two chartered flights carrying tennis players and staff over the past two days. 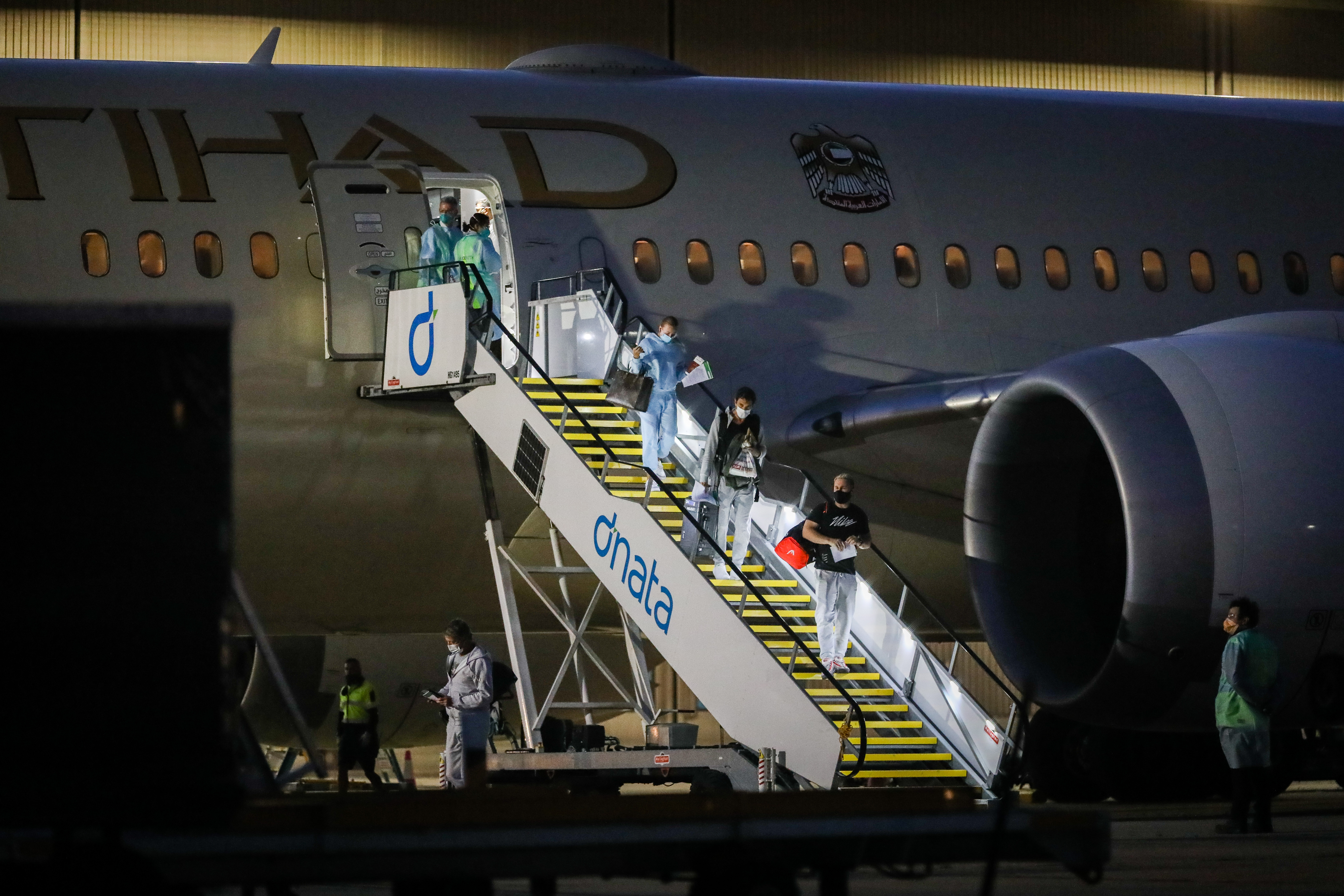 Ms Cassar said 62 close contacts were now in isolation, including almost 50 players who are unable to leave their rooms after travelling on the same flight as the positive cases.

The latest case arrived on a flight from Los Angeles, the same plane as two earlier confirmed cases in a coach and flight crew member.

A Canadian coach arriving in Melbourne on a flight from Abu Dhabi also tested positive to the virus.

Ms Cassar said all four cases tested negative before boarding and are now residing at the Holiday Inn health hotel.

As a result of the four confirmed infections, training has been pushed back while test results are processed.

"We are working with tennis Australia to be back on full day of training tomorrow."

Earlier, Victorian minister Lily D'Ambrosio admitted it's "not ideal" that almost 50 players cannot leave their hotel rooms after travelling on flights with the positive cases.

She pressed the point that players and staff must adhere to Tennis Australia's quarantine rules.

Originally players and coaches were going to be allowed to leave their hotel rooms for five hours a day, but those on the infected planes have been plunged into strict quarantine. 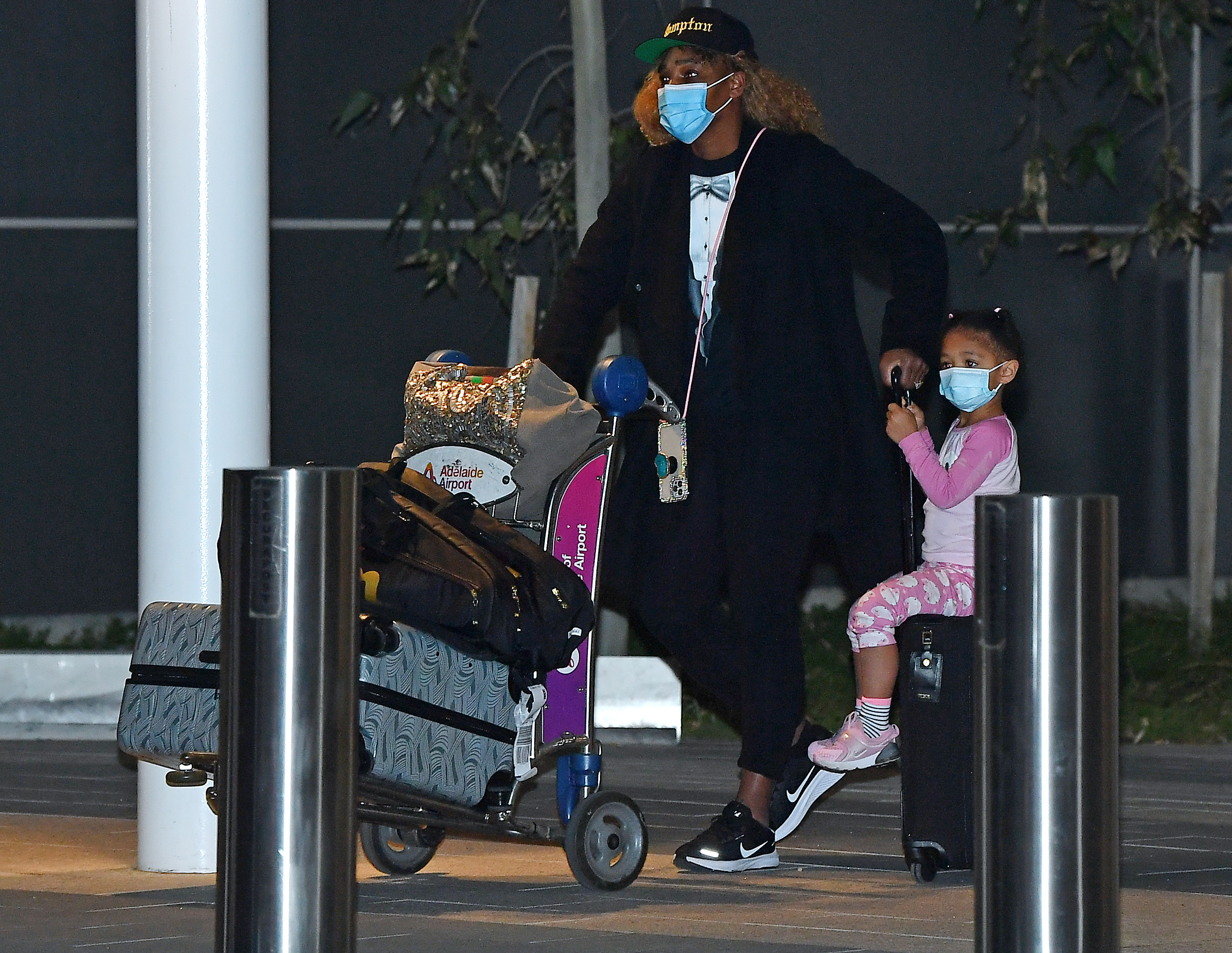 "We know that COVID knows no bounds and no boundaries, whether you're a first class tennis player or a spectator in the audience," she said.

"We need to keep to the clear health advice. It's far from ideal but COVID is not ideal. Rules are rules, no matter who you are."

Ms D'Ambrosio said all efforts were being made to make sure players and staff isolating in their hotel rooms were as comfortable as possible and gym equipment was being provided.

The police presence in Australian Open quarantine hotels is ramping up after Ms Cassar confirmed two people had breached certain rules and could be fined up to $20,000.

"The majority are doing right thing ... a small few are testing our procedures," she said.

"It's placing them and our staff and community at risk. Zero tolerance."

One player was warned by police after opening his hotel room door in an attempt to talk to a training partner down the hallway.

"The other (breach) was another gentleman who shouted UberEats to some other people on the floor and was praising himself for his great efforts, and opened his door to do so," Ms Cassar said. She said if players and their entourages did not adhere to quarantine measures they could be removed.

"The other option is to transfer to a complex care hotel with police outside door," she said.

"These are low level but dangerous acts we can't tolerate."

Ms Cassar said she understood quarantine was difficult but was imperative to keep people safe.

"Quarantine is hard and we know it is a very new and difficult arrangement," she said.

"This is in place to keep them safe and the Victorian community safe - and we make no apologies for that. 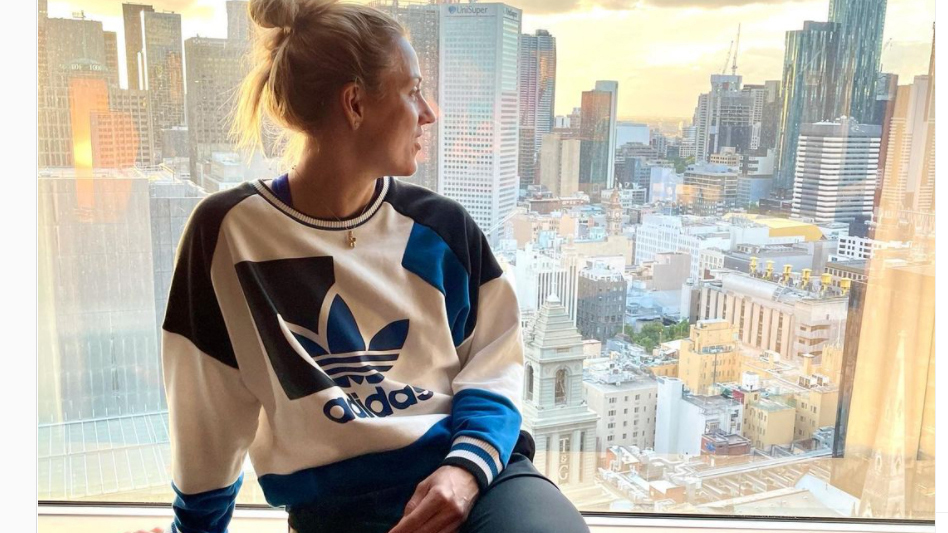 One of the two people involved in the breaches is a player and both individuals have received a warning.

She said if anyone in isolation needed assistance they should not open their door and simply pick up the phone.

Sylvain Bruneau, the coach of 2019 US Open champion Bianca Andreescu, confirmed he was one of the positive cases.

In a statement on Twitter, Mr Bruneau said he was "saddened and sorry" by the result.

"I am deeply sorry to share that I have just tested positive for COVID-19 upon arrival here in Melbourne, after travelling from Abu Dhabi on flight EY8004," he said.

"I have followed all the safety protocols and procedures, including testing negative within 72 hours before the flight departure and felt perfectly fine when I boarded the plane.

"I also respected and followed all COVID protocols and guidelines while in the Middle East. I have no idea how I might have contracted this virus.

READ:  Russian army called in to extinguish oil fire in Siberia - by shooting at it

"I am extremely saddened and sorry for the consequences now on everyone's shoulders sharing my flight. The rest of my team is negative and I sincerely hope that any further disruption is kept to a minimum." 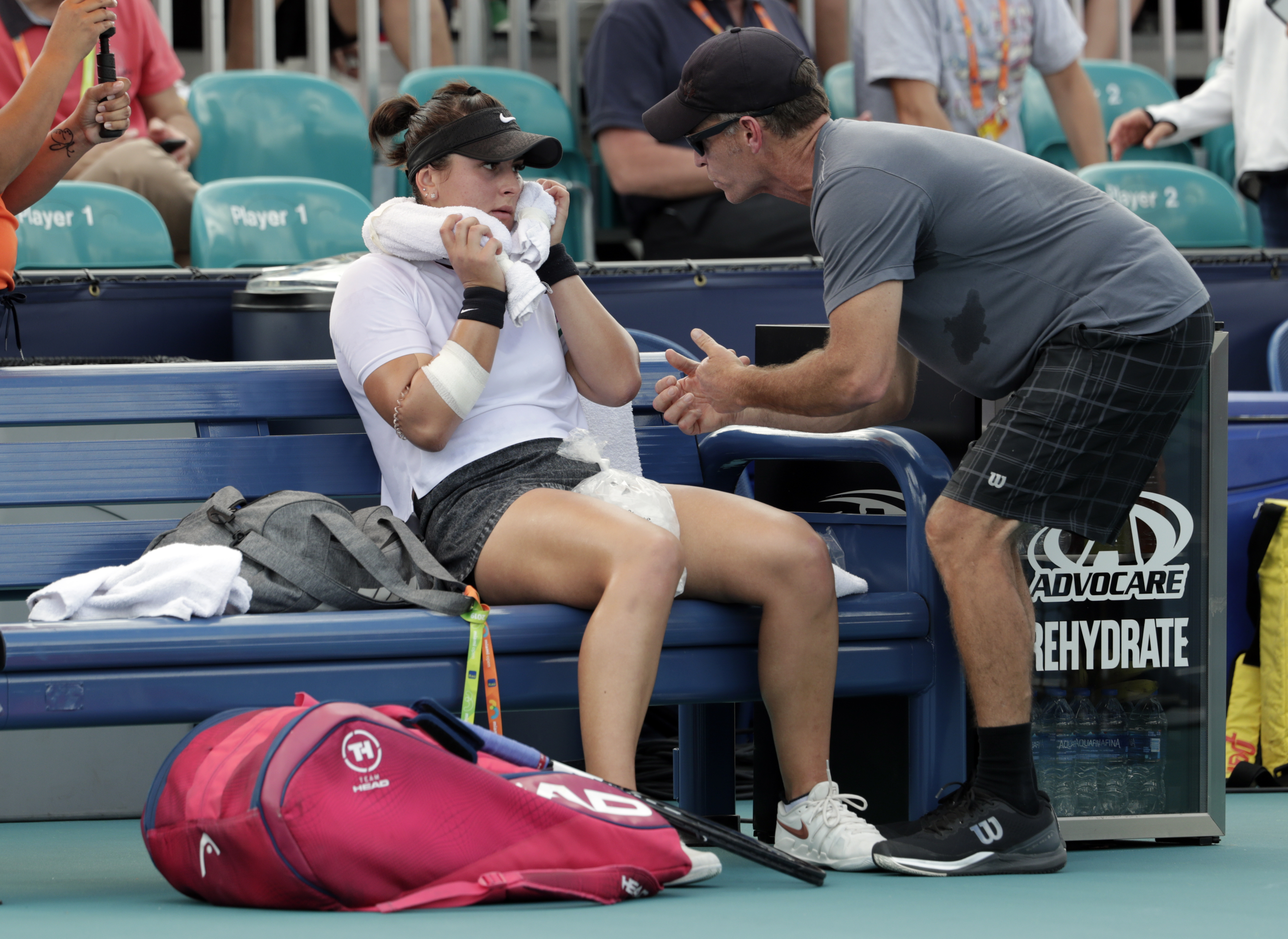 No other positive tests have yet been detected from the Abu Dhabi flight which arrived in Melbourne at 8.20am on Friday.

But testing for passengers and close contacts will continue across the next two weeks.

Players who were on the COVID positive flights cases are unable to train three weeks out from the Australian Open and must do 14 days of strict room-only quarantine.

Players and staff on 15 other charter flights which have arrived in Melbourne and Adelaide from seven international cities face a nervous wait to find out if anyone on board their flight tests positive. 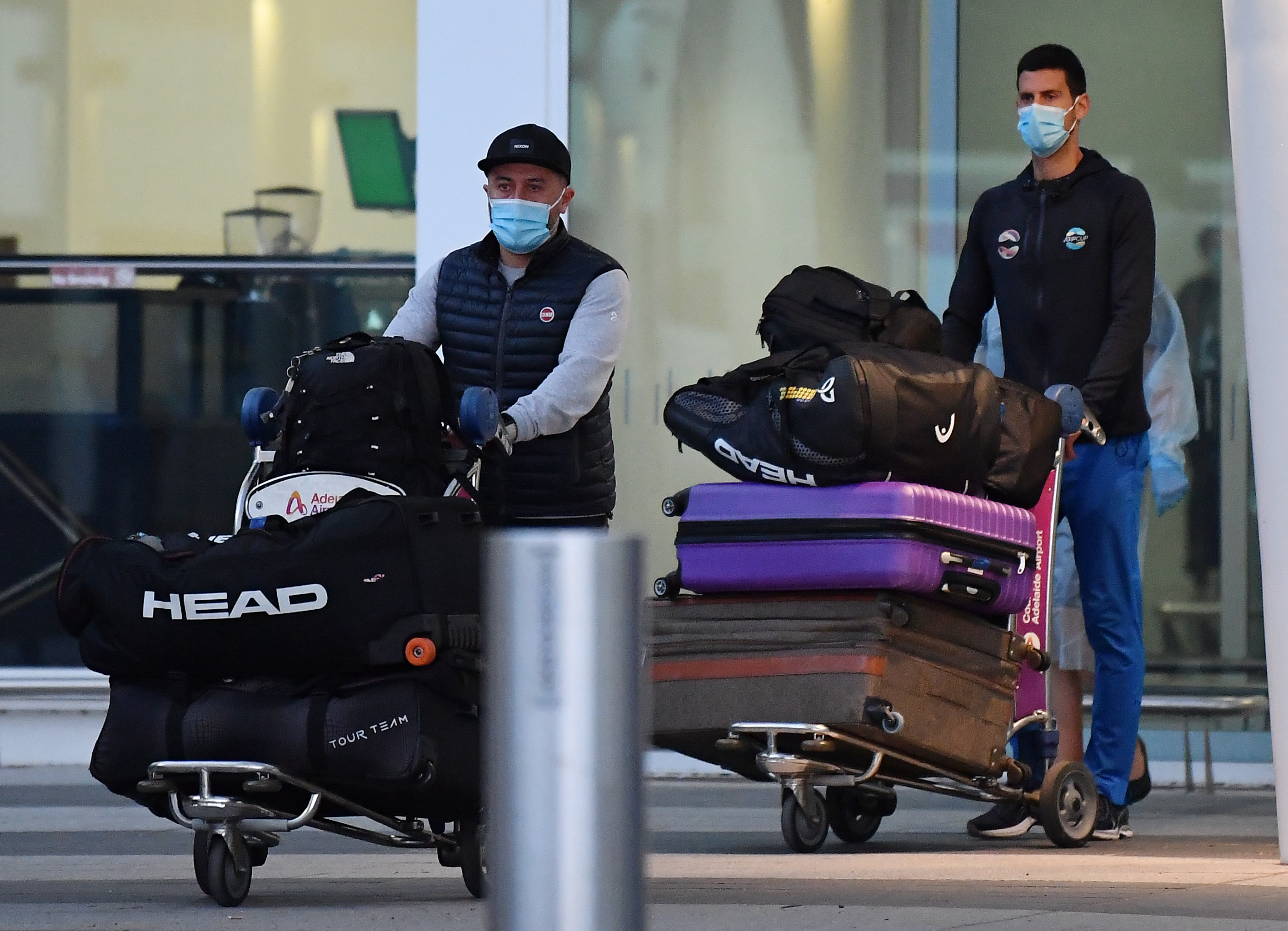 Tennis Australia CEO Craig Tiley said despite the controversial cases the Open would still go ahead.

"We are planning on February 8. We have two weeks of some great tennis and our intention is to absolutely continue with those dates." he told Weekend Today.