The Ruby Princess has docked at a southern NSW port, carrying “up towards 200” sick crew who have overwhelmed the ship’s struggling mini hospital.

The Ruby Princess has docked at a southern NSW port, carrying "up towards 200" sick crew who have overwhelmed the ship's struggling mini hospital.

Eleven passengers from the Ruby Princess have died from COVID-19, including a Queensland woman yesterday, and hundreds in NSW have contracted the virus after it docked in Sydney last month.

This morning the hulking white Ruby Princess and its helpless 1040 crew sailed into Port Kembla, 80 kilometres south of Sydney, with NSW Police hoping to send it on to its home port in Bermuda. 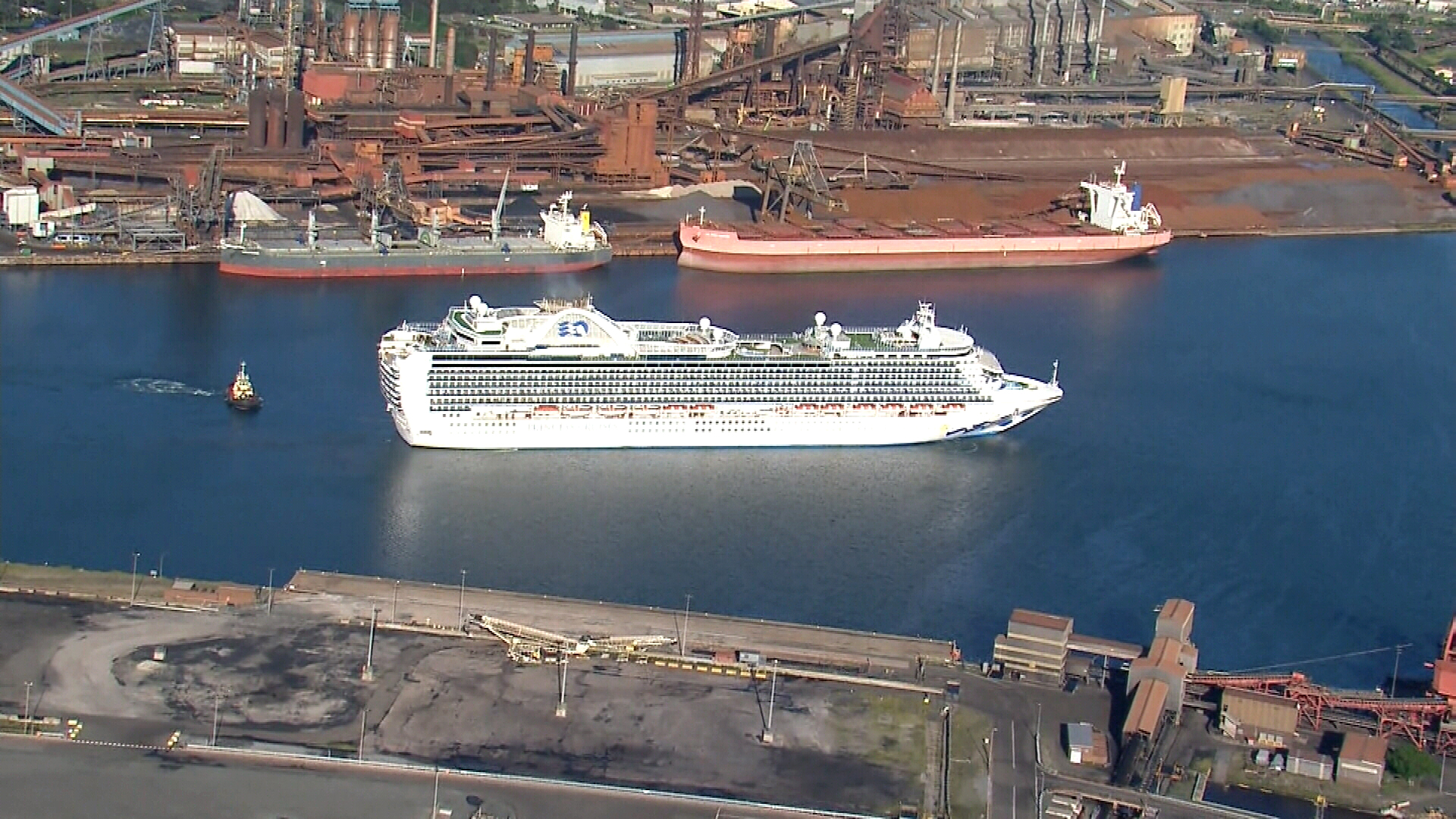 NSW Police Commissioner Mick Fuller today said "up towards 200" crew are sick, although it is yet to be confirmed if they have the deadly coronavirus.

Australian Border Force and specialist health teams will this morning board the ship and test crew members for COVID-19, before the ship refuels and restocks for its home journey.

Are you on this ship? Do you know more? Email msaunoko@nine.com.au

The Ruby Princess' hospital holds a maximum of 200 people, at which point sick crew would need to be removed and taken to NSW hospitals.

"The ship poses no threat to the local community," Comm Fuller said, addressing questions about transporting sick crew members off the vessel.

Yesterday two crew sick with coronavirus were moved from the liner to a NSW hospital.

"Taking sick crew passengers off at sea is a complex and dangerous task," Comm Fuller said, explaining the decision to dock the ship at Port Kembla.

NSW Police have used Port Kembla to refuel and resupply other cruise liners during the coronavirus pandemic.

"We will continue to make sure there is the highest level of security for the locals down in southern NSW."

A criminal investigation is now underway into how thousands of passengers were allowed to disembark from the Ruby Princess. 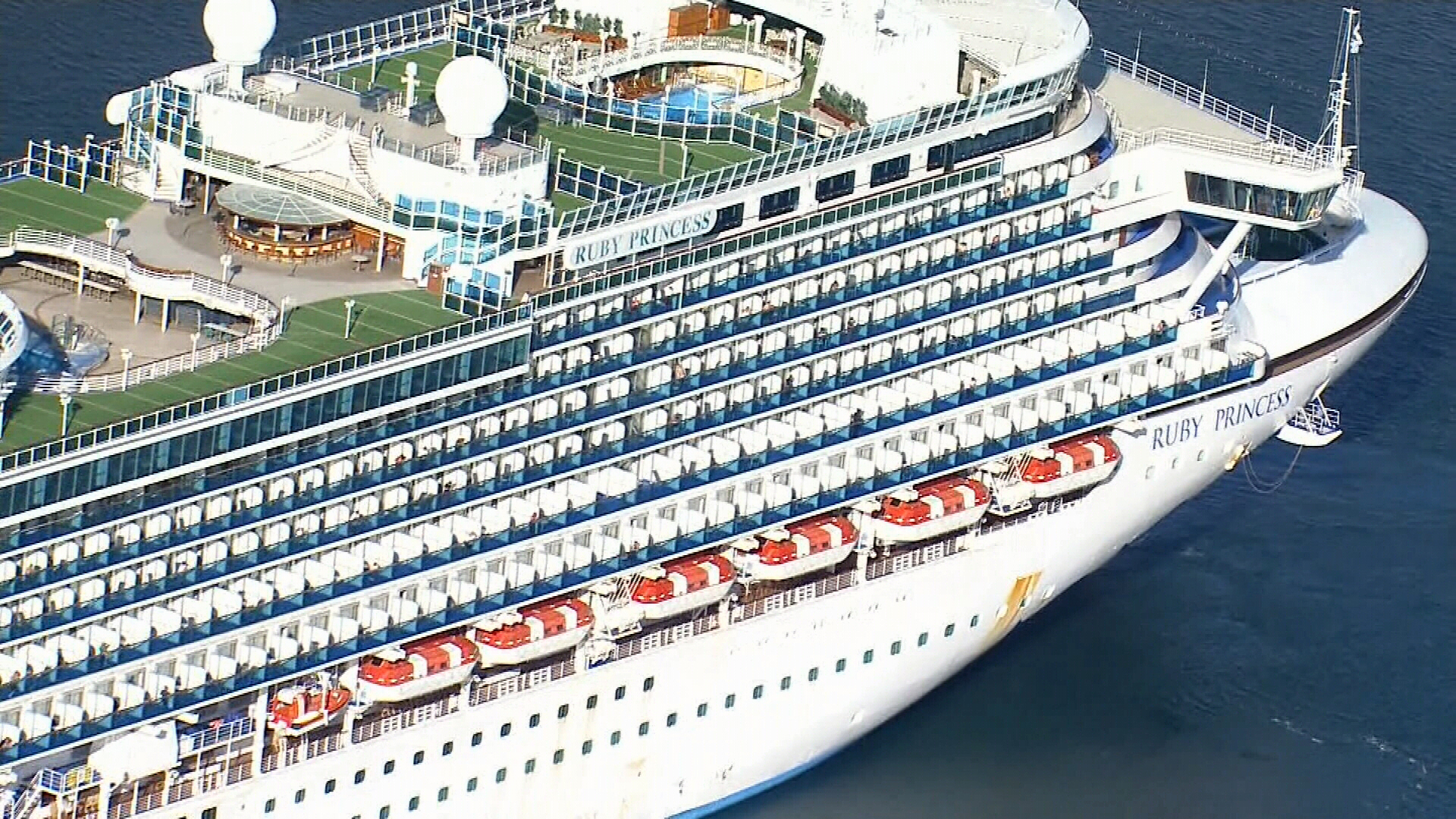 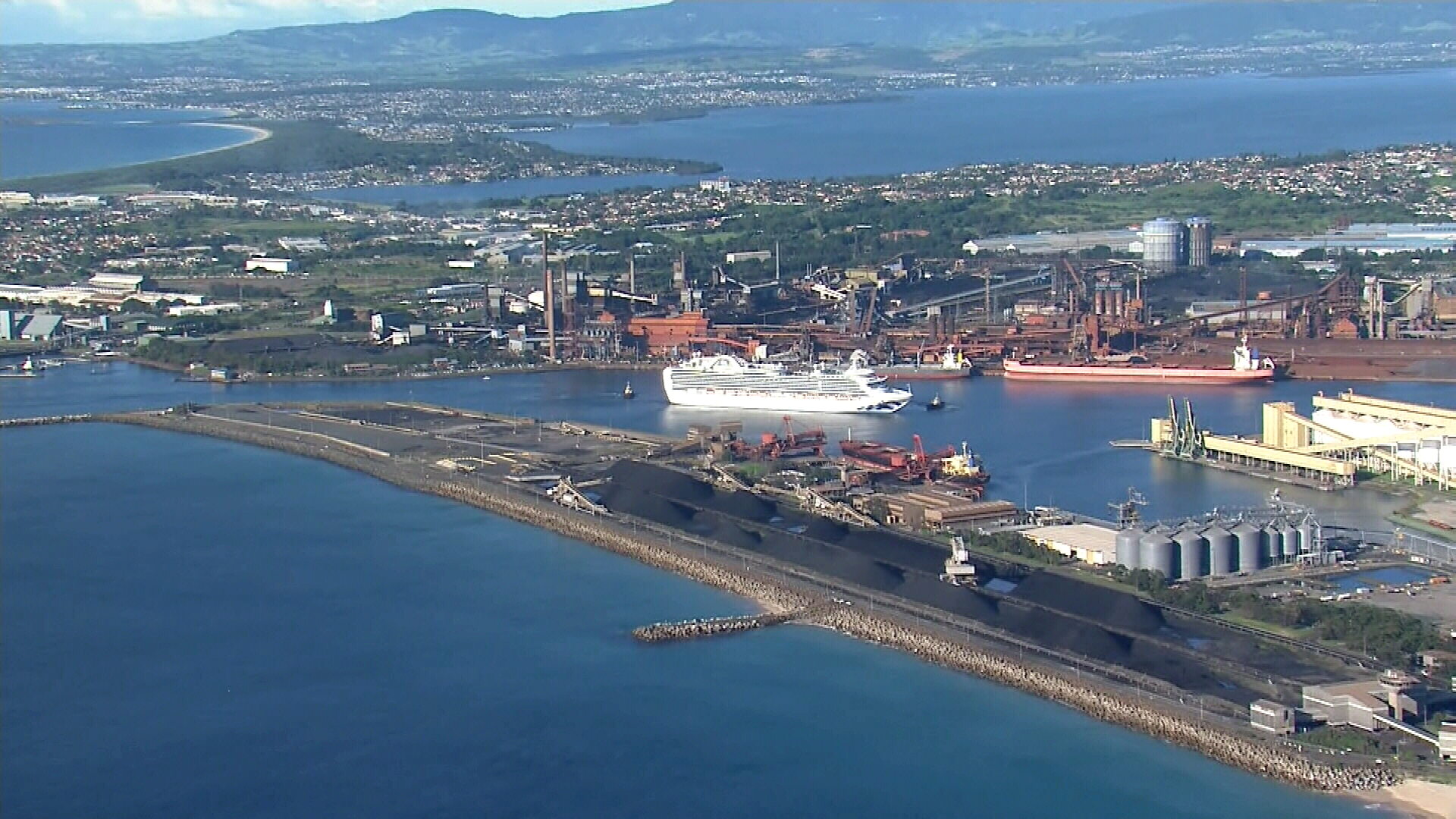 Police say the investigation will involve interviewing thousands of witnesses, including the Ruby Princess' captain and doctors, the crew and passengers; and staff from various Commonwealth and NSW Government offices and agencies.

Comm Fuller said police, in tandem with the NSW state coroner, will want "doctors' records and a whole lot of other records" from the Ruby Princess and parent company, Princess Cruises.

It was too early to tell if a crime had been committed, Comm Fuller said.

But he was adamant "lessons would be learned by a number of agencies" as the role of NSW Health, the ABF and Ruby Princess in the deadly debacle is picked apart in detail.

The Ruby Princess has also triggered a COVID-19 outbreak in Hawke's Bay in New Zealand, where it docked before setting sail for Australia. 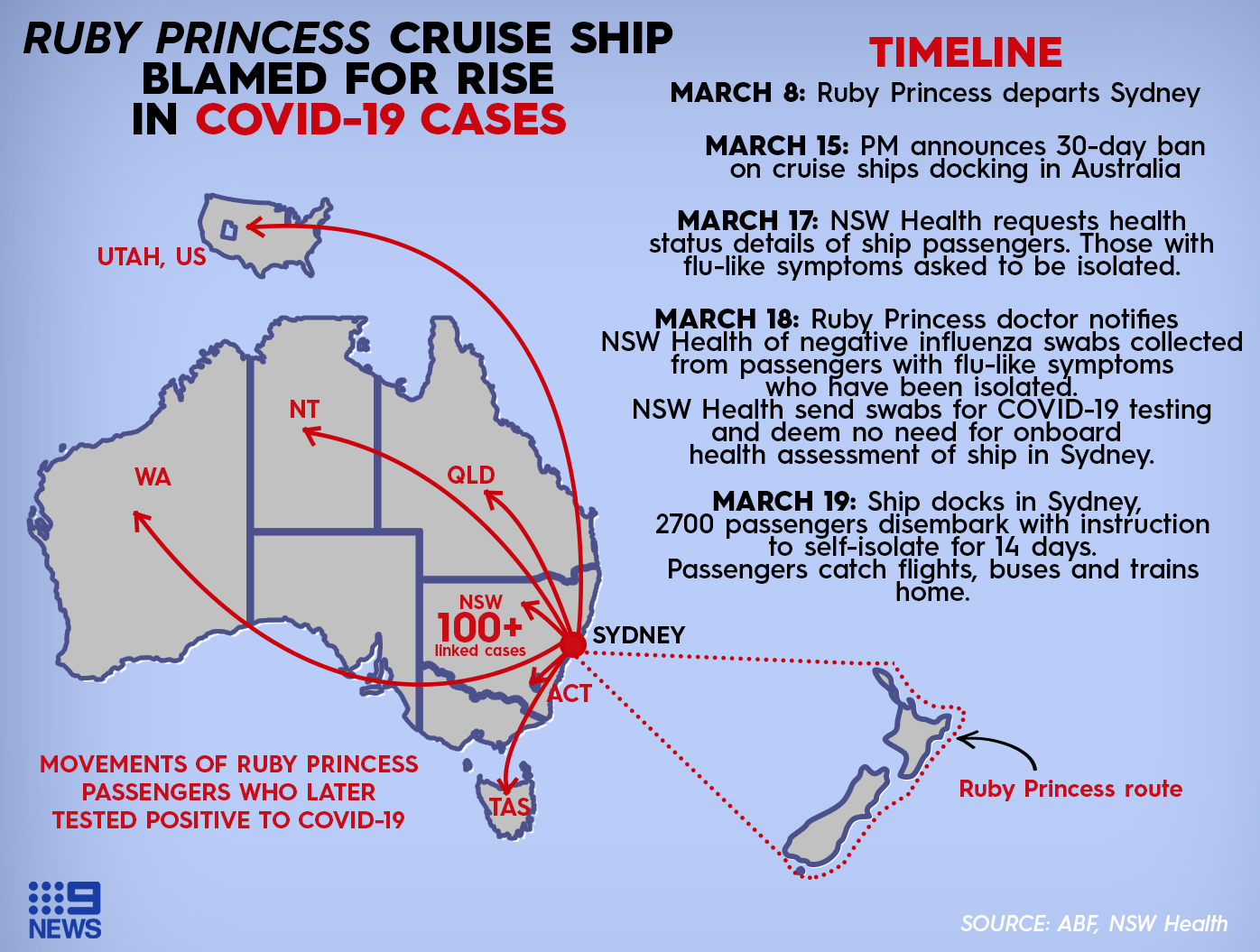 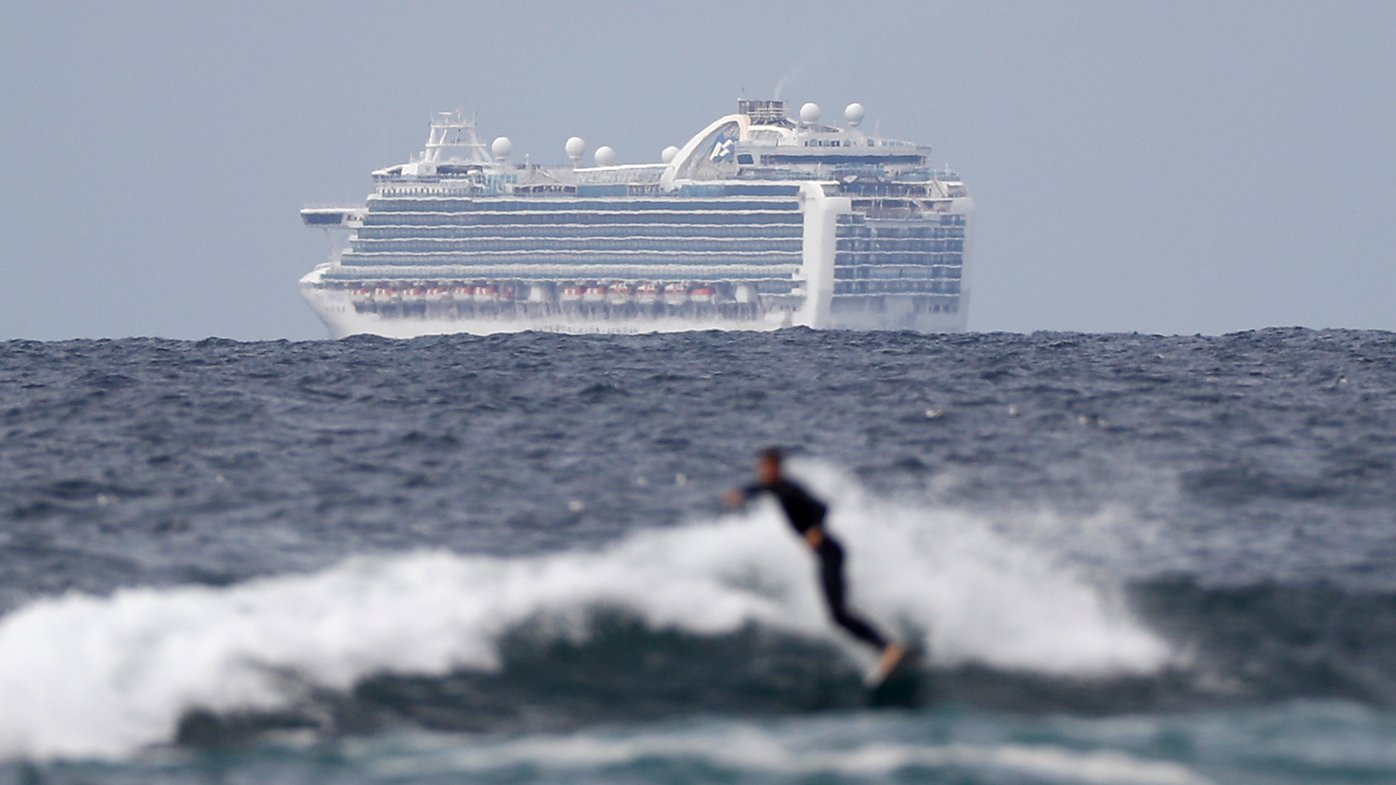 During her daily briefing, Premier Gladys Berejiklian deflected criticism from some reporters about why Health Minister Brad Hazzard was not present to answer questions.

Over the weekend, NSW Police sent five cruise ships out of NSW waters in "the largest maritime operation" in the state's history.

'Operation Nemesis' saw more than 1300 crew members moved between the five ships, before the vessels returned to their home countries.

Are you on this ship? Do you know more? Email msaunoko@nine.com.au