It’s looking increasingly likely that a Rose Garden event late last month was ground zero for a spate of coronavirus infections spreading among those with close ties to the White House, including Donald Trump.

It's looking increasingly likely that a Rose Garden event late last month was ground zero for a spate of coronavirus infections spreading among those with close ties to the White House, including President Trump himself.

Some 200 people gathered for the nomination ceremony for Judge Amy Coney Barrett on September 26. 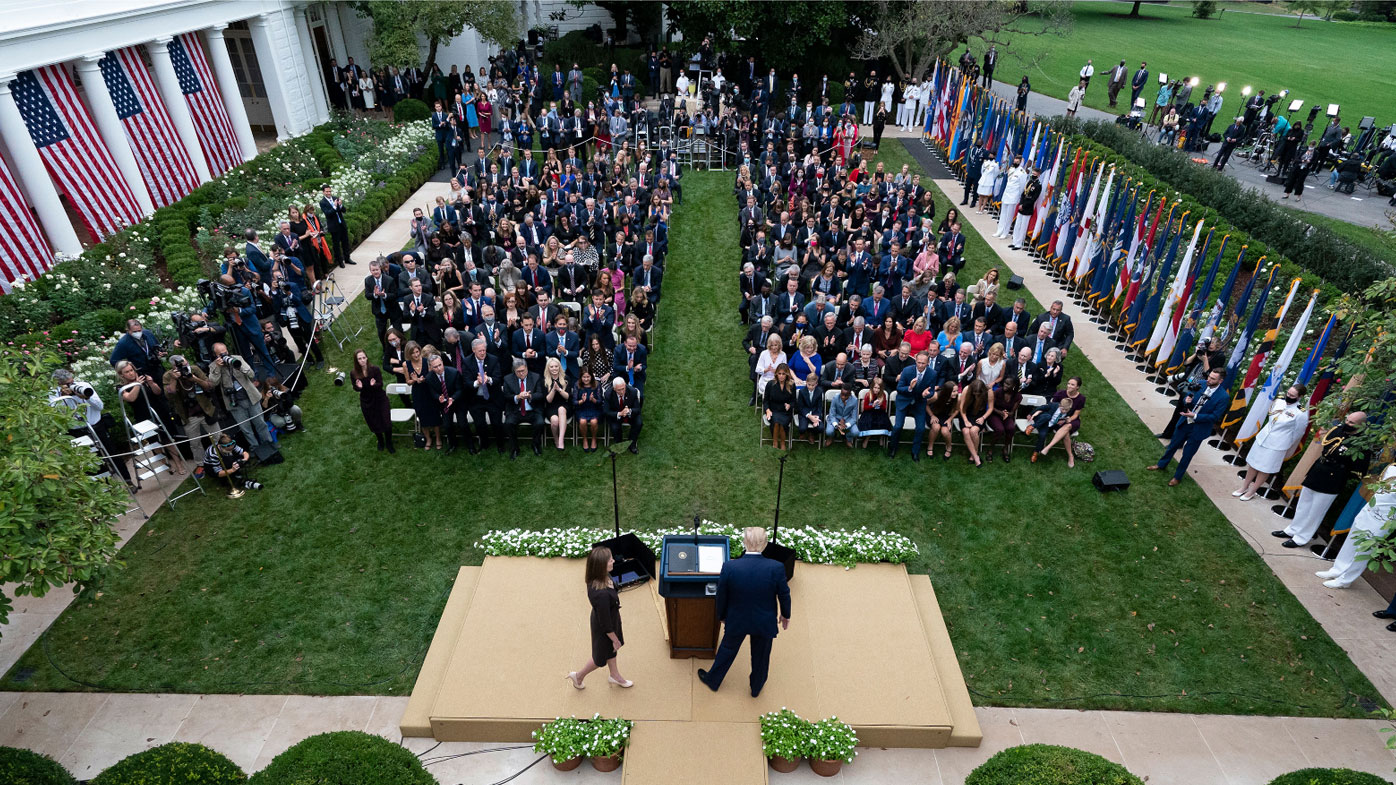 So far, at least 10 people who attended that event have tested positive for the virus, including the President, the first lady, Senator Mike Lee from Utah and Senator Thom Tillis from North Carolina, Mr Trump's debate sparring partner and former New Jersey Govenor Chris Christie, former Mr Trump's counsellor Kellyanne Conway, megachurch pastor Greg Laurie, and John Jenkins, president of the University of Notre Dame, along with an unnamed journalist.

Others who recently spent time with people in this group (but did not attend the ceremony) have tested positive too, including Mr Trump's adviser Hope Hicks, as well as the Republican National Committee chairwoman, Ronna McDaniel, Trump's campaign manager, Bill Stepien, and Mr Trump's assistant, Nicholas Luna.

Even though the ceremony was held outdoors and many attendees were tested before being allowed in, photos and videos of the event show few people wearing masks, many people greeting each other with hugs and handshakes, and people mingling and sitting very closely.

READ MORE: Trump's doctor warns he's 'not out the woods yet' despite leaving hospital 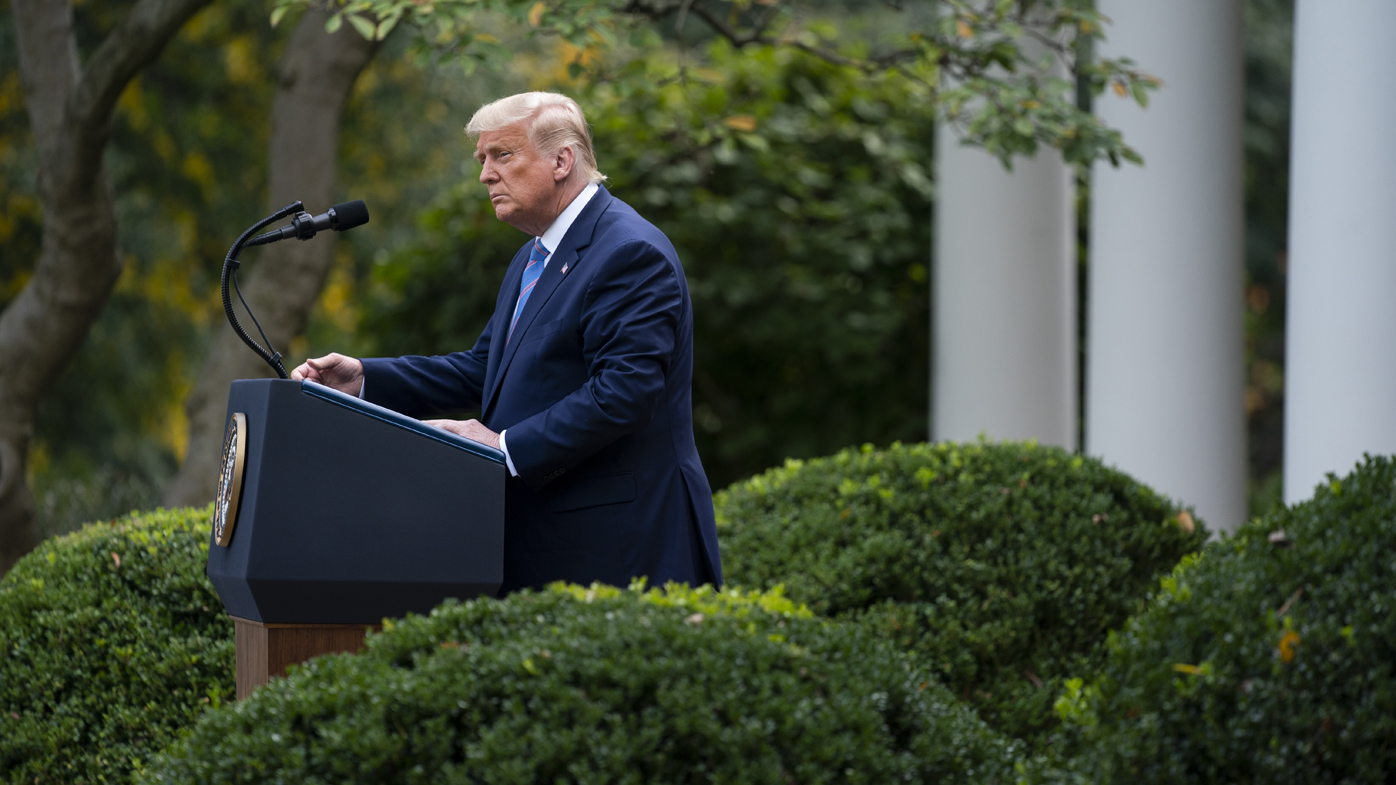 If we have learned anything over the last few months, it's that we should maintain physical distance with other people, keep our contact with them brief, and wear a mask.

But we may not know for a while what the exact consequences of the Rose Garden ceremony are, because it does not appear that the White House it is conducting thorough contact tracing.

That's according to reports from attendees of the event, who say they either haven't been contacted at all or they weren't asked the questions typically used to document who else may have been exposed through contact.

Mr Trump's reluctance to follow these basic public health recommendations has long been a source of concern and consternation for public health experts, doctors, politicians and others, especially because his failure to lead by example might encourage his supporters to follow suit.

Nowhere is this more apparent than at his rallies where thousands of his supporters crowd together, often maskless, to listen to what he has to say.

The President's illness forced him to postpone two rallies he had planned for last weekend in Wisconsin. 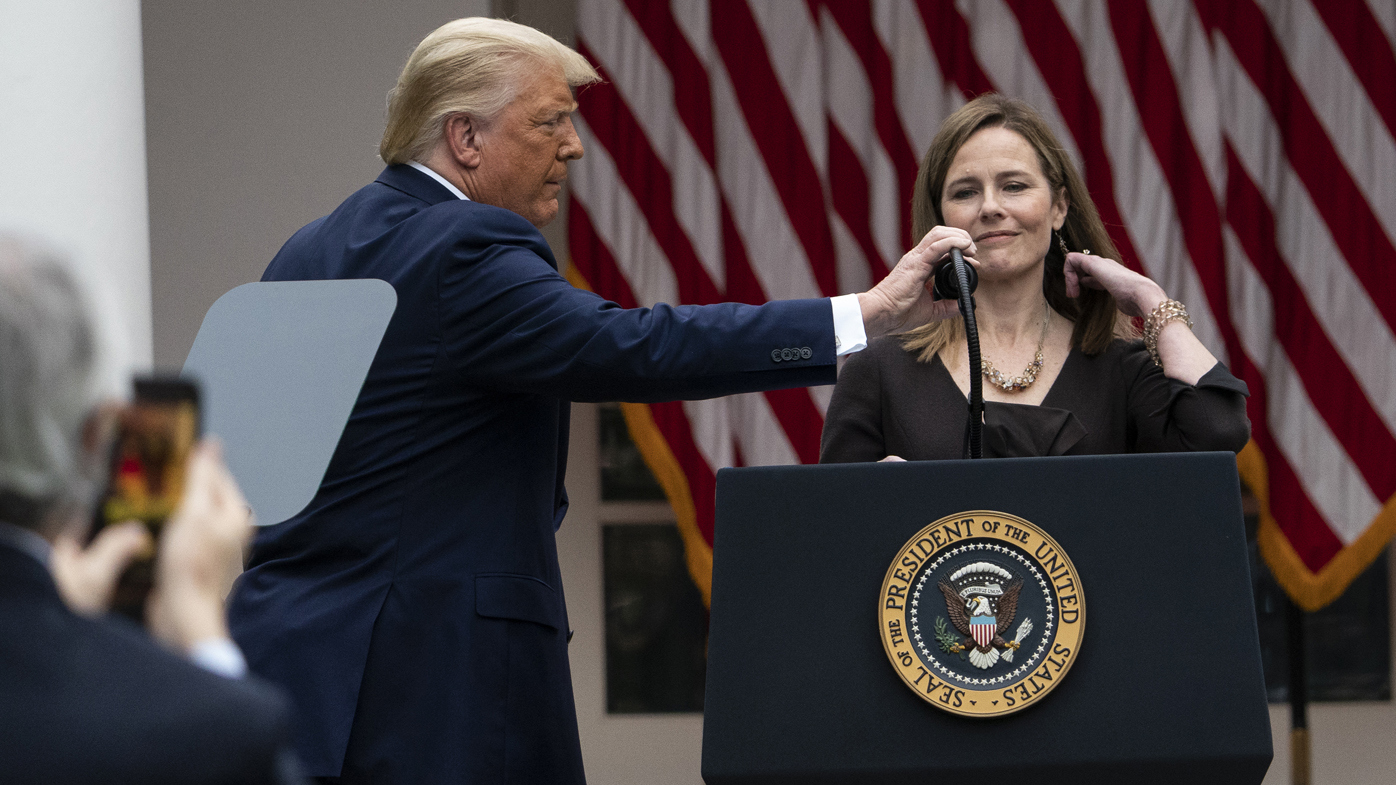 Some local Wisconsin officials may be breathing a sigh of relief. The state is in the middle of a coronavirus surge, according to public health officials, and hosting two large rallies was not at the top of public officials' wish list.

The mayors of both host cities had asked the President not to come and the governor said Thursday it made no sense for the President to hold rallies in "two of the hottest of hot spots."

"The idea of holding a large gathering, which brings in many people to parts of Wisconsin that are experiencing a health care crisis, to me seems really deeply irresponsible," Dr Tom Inglesby, director of the Centre for Health Security at Johns Hopkins Bloomberg School of Public Health said. 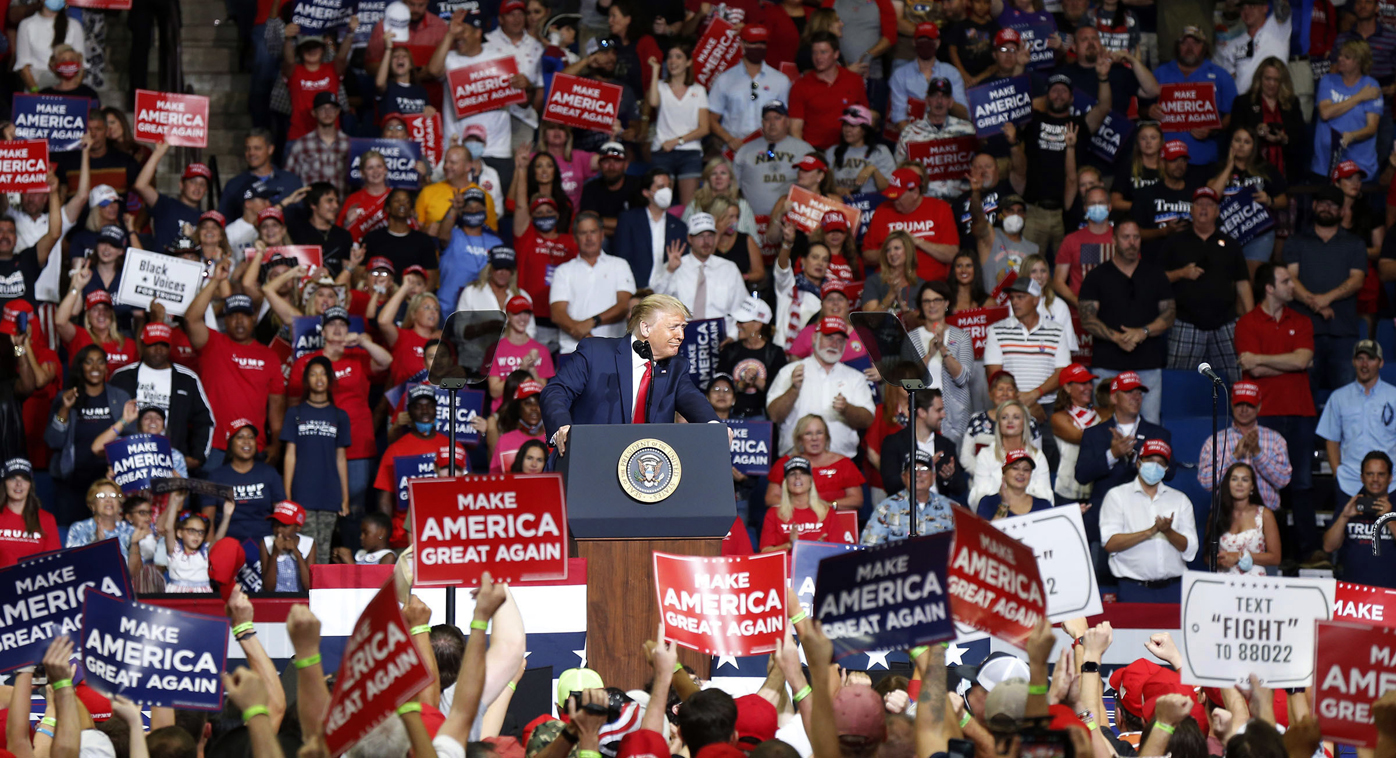 In Minnesota, where Mr Trump held a rally last Wednesday, the state Department of Public Health said there was a potential risk of transmission from the event in Duluth, as well as other events associated with his visit.

It advised anyone who came into direct contact with the President or others who were known to be positive for the virus to quarantine and get tested.

The statement also noted that community transmission was already high in St Louis County, where Duluth is located, prior to the rally. 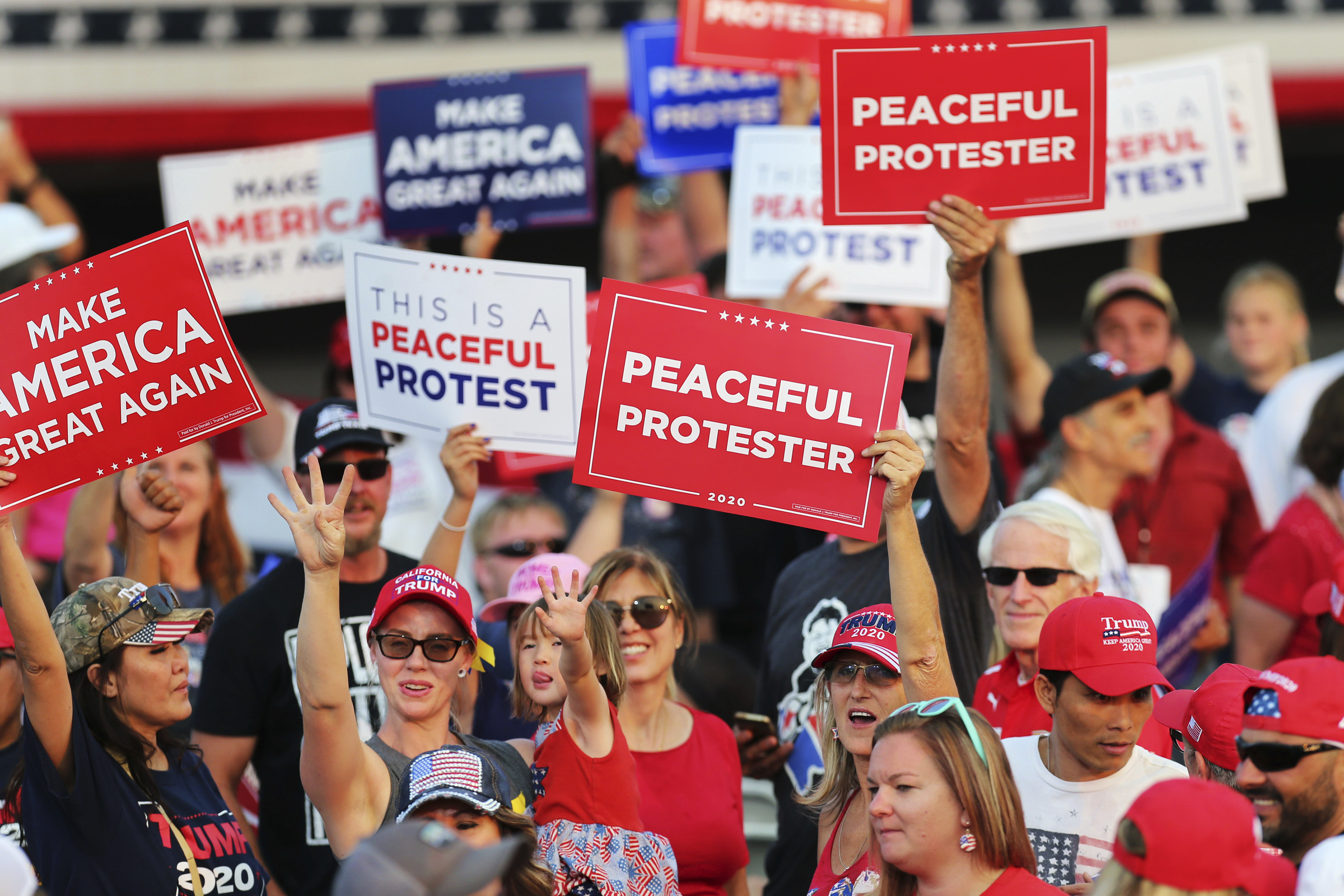 What is the big deal?

By now, almost seven months into the official pandemic, most understand the risk of large rallies. People are generally packed together. They may be yelling or chanting or singing, all of which can send potentially infectious droplets out more forcefully.

Some rallies are held indoors, where the risk of transmission is greater than outdoors because there is less air circulation. And photos show that many people, particularly at Trump rallies, don't wear masks, which protect the wearers and those around them.

Until his health took a turn, Mr Trump himself was almost never seen with a mask. During the debate, he mocked Democratic challenger Joe Biden for consistently wearing a mask.

"I don't wear masks like him. Every time you see him, he's got a mask. He could be speaking 200 feet away from it and he shows up with the biggest mask I've ever seen," he said.

But as the Rose Garden ceremony and similar groups of infections in other countries have demonstrated, you don't need a huge indoor rally to ignite what could become superspreader event, and no one layer of protection is enough.

CNN contributor Erin Bromage, an associate professor of biology at the University of Massachusetts, Dartmouth, said a new way of thinking about it is "shared air."

"When we start thinking about how the virus moves through the population when you have lots of people there, if they're sharing the air with each other, then the chances of large outbreaks increase," he said. 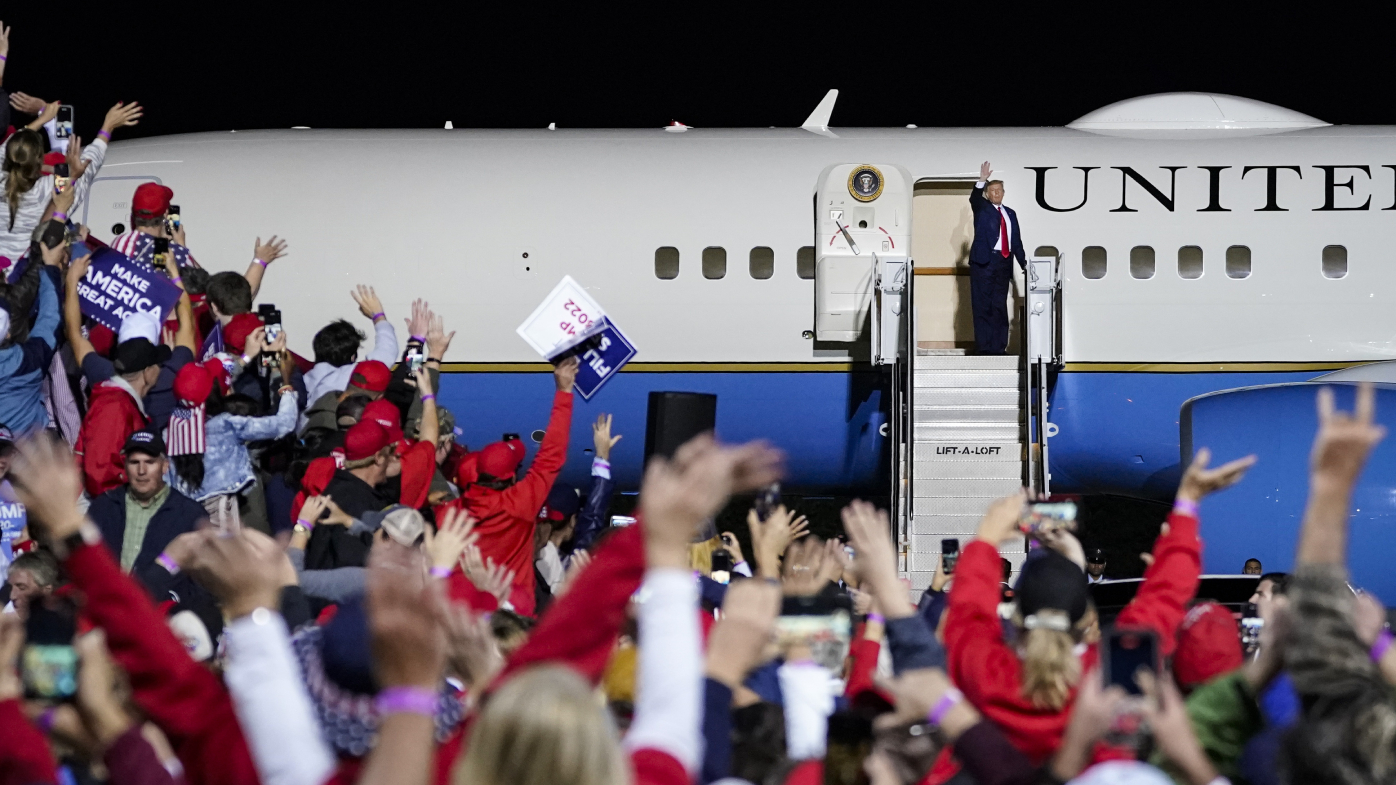 Mr Bromage said to think of a campfire. "And say that that's a person who is infected, and releasing virus, we can see that not everybody sitting around that campfire is equal in regards to the amount of virus or smoke that they're actually getting into their face," he explained.

READ:  The virus that could destroy the seafood industry

Regardless of exact size, said Mr Bromage, "It doesn't make sense that during this time we are dragging this number of people together because we know when you do pull them together, the opportunities for infections increase."

Dr Inglesby echoed the sentiment. "It's just clear that large numbers of people getting together in close proximity is going to increase the risk of transmission - and that's true whatever the purpose of that gathering is," he said.

Dr Inglesby is also concerned about "associated events," particularly around rallies. "Either people going to restaurants or bars, traveling together to get to the rally, coming from different places of the country -- all those things increase the risk of transmission, and I think are a risk that we really shouldn't be taking right now," he said. 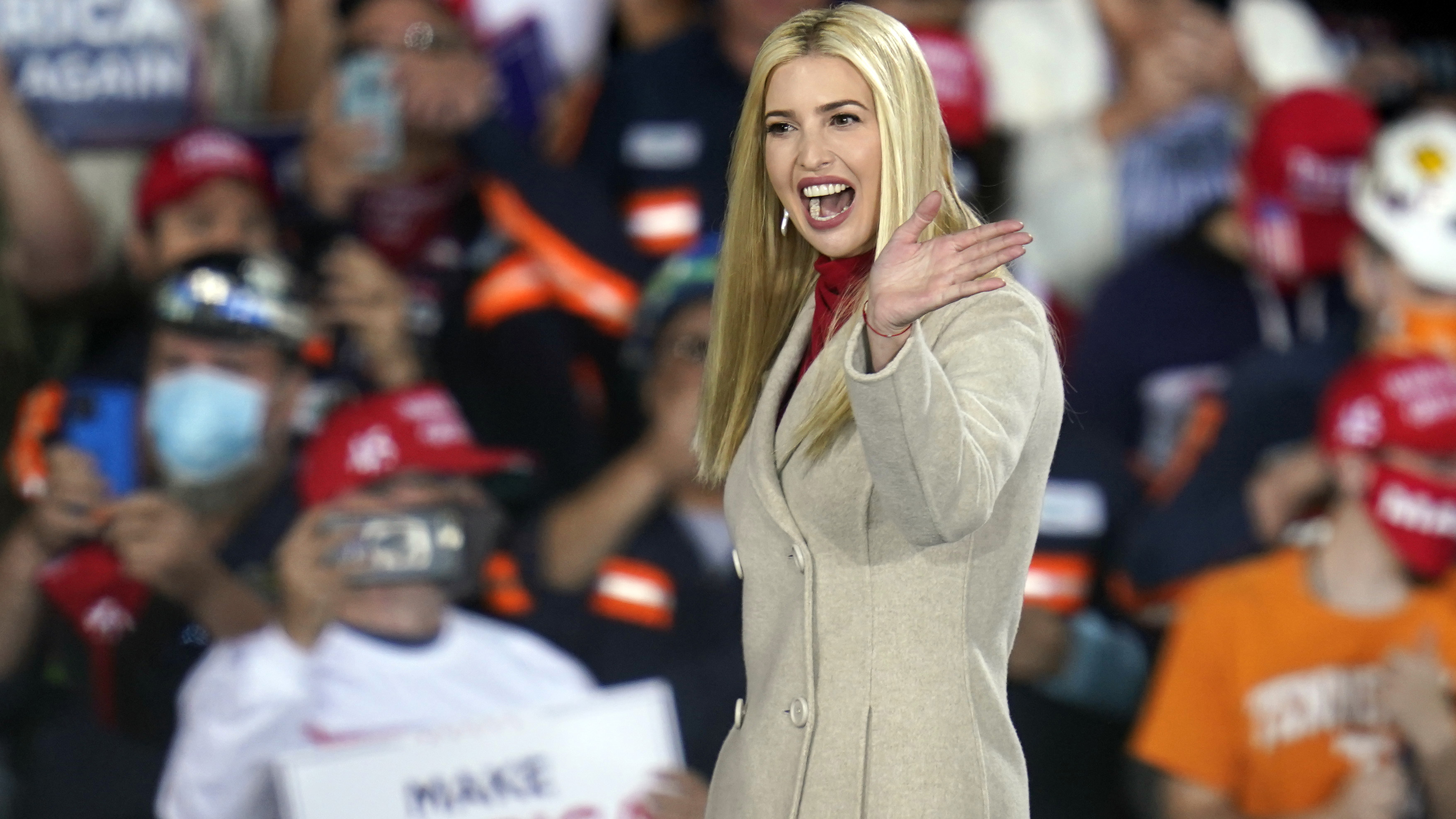 According to Dr Inglesby and Mr Bromage, these big rallies put everyone, not just rally-goers, at risk.

"The big pops that we're actually seeing is the residual effects that it has in the community, after he [Trump] leaves," says Mr Bromage.

"It's the shop owners and the store keepers and the people that are running businesses that get exposed to the 10, 20, 30,000 people that come into town and bring their infections with them, that then gets stuck with the infections afterwards."

"A second risk is that people are traveling from other places, and potentially may travel and bring the disease in with them and infect others, or they may travel there and become infected and take it back home to their own communities," he said.

It's often hard to pin disease spikes in a county or city directly on a rally or large event -- and it may be hard to definitively identify who sparked the wave of infections linked to the Rose Garden event.

But in some cases, it is possible. The 10-day Sturgis motorcycle rally that attracted some 460,000 attendee vehicles to South Dakota is one example.

By CNN's count, there were at least 260 cases across 12 states linked to the rally.

After other large gatherings, hard numbers are elusive mainly because many rallies -- like the Minnesota rally and cancelled Wisconsin rallies, happen in states where infection rates are already on the rise, sometimes alarmingly so.

The same goes for protests that started earlier this summer and coincided with many states re-opening.

READ:  Inadequacies of the EPBC Act

That makes it hard to tease out the effect of the rally or protests or any large gatherings from general trends.

The numbers get even more slippery when you add in the lag time between people getting infected, showing symptoms, getting tested, and those numbers being reported.

At the end of May, Oklahoma was seeing about 65 new COVID-19 cases per day based on a seven-day moving average, but by June 13, that number more than doubled to an average of 145.

By the time of the Trump rally one week later, the state was already seeing an average of 281 COVID-19 cases per day. 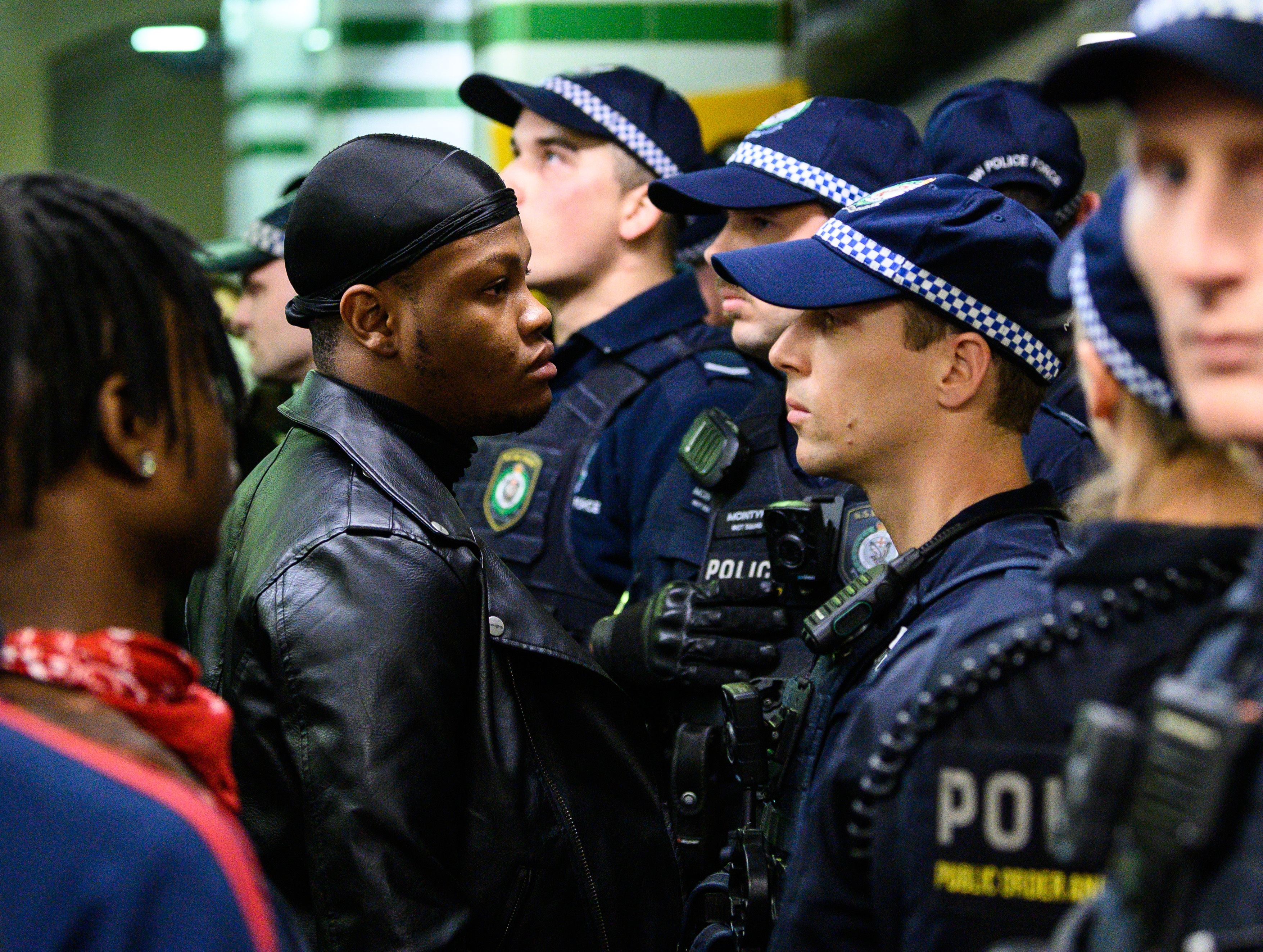 Three weeks after the President's rally, on July 11 the state was averaging 590 new cases per day. Cases were up 110 per cent from the date of the rally, and up 541 per cent from June 6.

The Oklahoma numbers, and those from other states where Mr Trump had summer rallies, like Arizona, show why it's hard to tease out a particular event from a state or county's rising numbers.

"I don't think we have clear causal connections between particular events, gatherings, rallies, indoor events and rises in cases in the country.

"There's circumstantial correlation, but I don't think we have clear compelling evidence of one rally versus another," said Dr Inglesby.

"But, I don't think that the absence of evidence is evidence of absence, or evidence that it's not occurring," he added.

Dr Inglesby says the only way to directly correlate a case of COVID-19 to is source is through a case investigation. 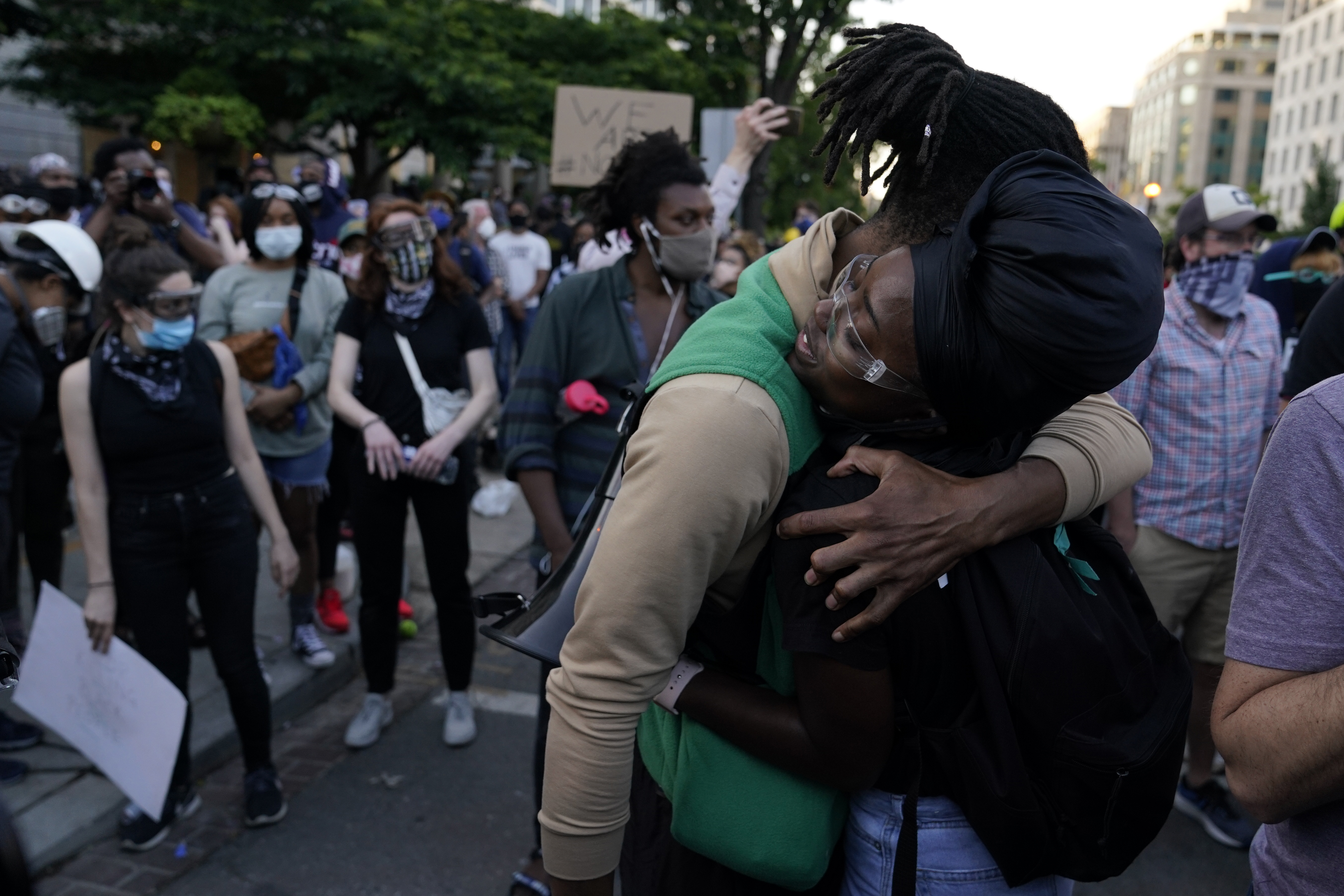 "Someone gets sick, a public health official calls them on the phone, they spent time talking through their activities in the time leading up to their infection, and if they were at a large gathering and if other people also are found to have been at that that large gathering, you could get a pretty, pretty good sense that that was the cause," he said.

"It will be hard to know for sure just by tracking a particular metric like incidence or positivity rate, but those might be able to give us some sense - a possibility of a connection - but it will be hard to prove without real case investigations of cases linking back to larger events," he said.

While it can be difficult to pinpoint the exact causes and effects of these possible superspreader events, the Rose Garden ceremony is giving a look at the anatomy of how it could all happen - not just there, but anytime people get together in large groups in the middle of a pandemic.

Despite the President's experience with COVID-19, he and his team may have not gotten the memo: Vice President Mike Pence is scheduled to host a rally in Peoria, Arizona, this coming Thursday.