Over the last couple of days, this thick cloudband has already caused the heaviest October rain in over 120 years of records in parts of South Australia, prompted a flood watch in central Australia, and produced the coldest day in four years at Alice Springs.

The wet and stormy weather will continue today in parts of the Northern Territory, South Australia, NSW, the ACT, Victoria and Tasmania. 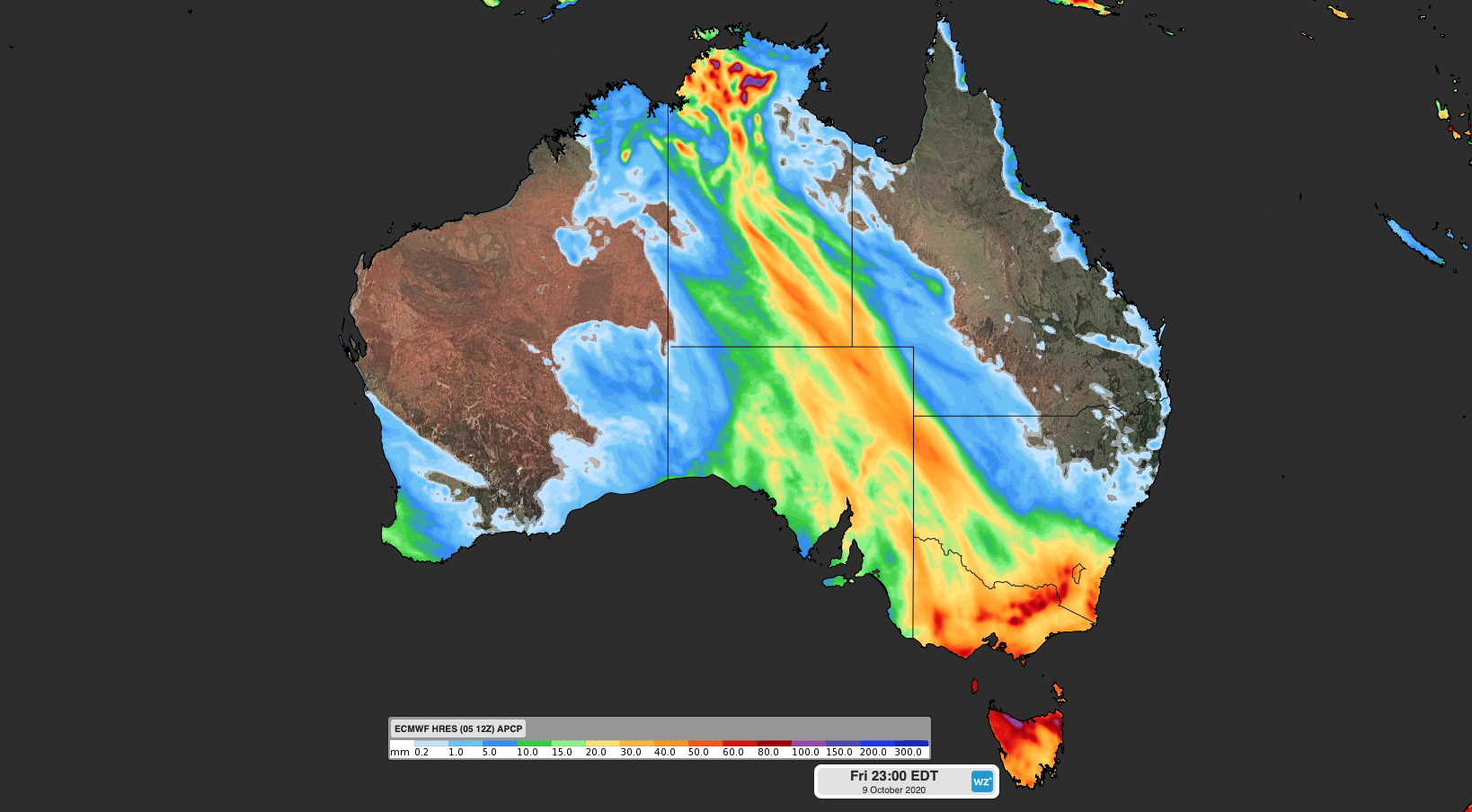 Showers and storms will be heaviest about South Australia and Victoria today with weather warnings in place for both states.

Onshore winds across the Queensland coast is also causing a few showers.

Here's the weather across Australia on Wednesday October 7, 2020.

Sydney will be cloudy with a medium chance of rain, most likely this afternoon and evening. Light winds with temperatures between 16C and 21C.

Similar conditions are expected in the ACT with a very high chance of rain an light winds. A cool day is expected with a minimum of 12C and maximum of 18C.

Melbourne will be cool and cloudy. Very high chance of rain, most likely during this afternoon and evening. The chance of a thunderstorm later tonight. Light winds becoming E/SE 15 to 20 km/h in the morning then becoming light in the evening. Heading for a low of 11C and a top of 17C. 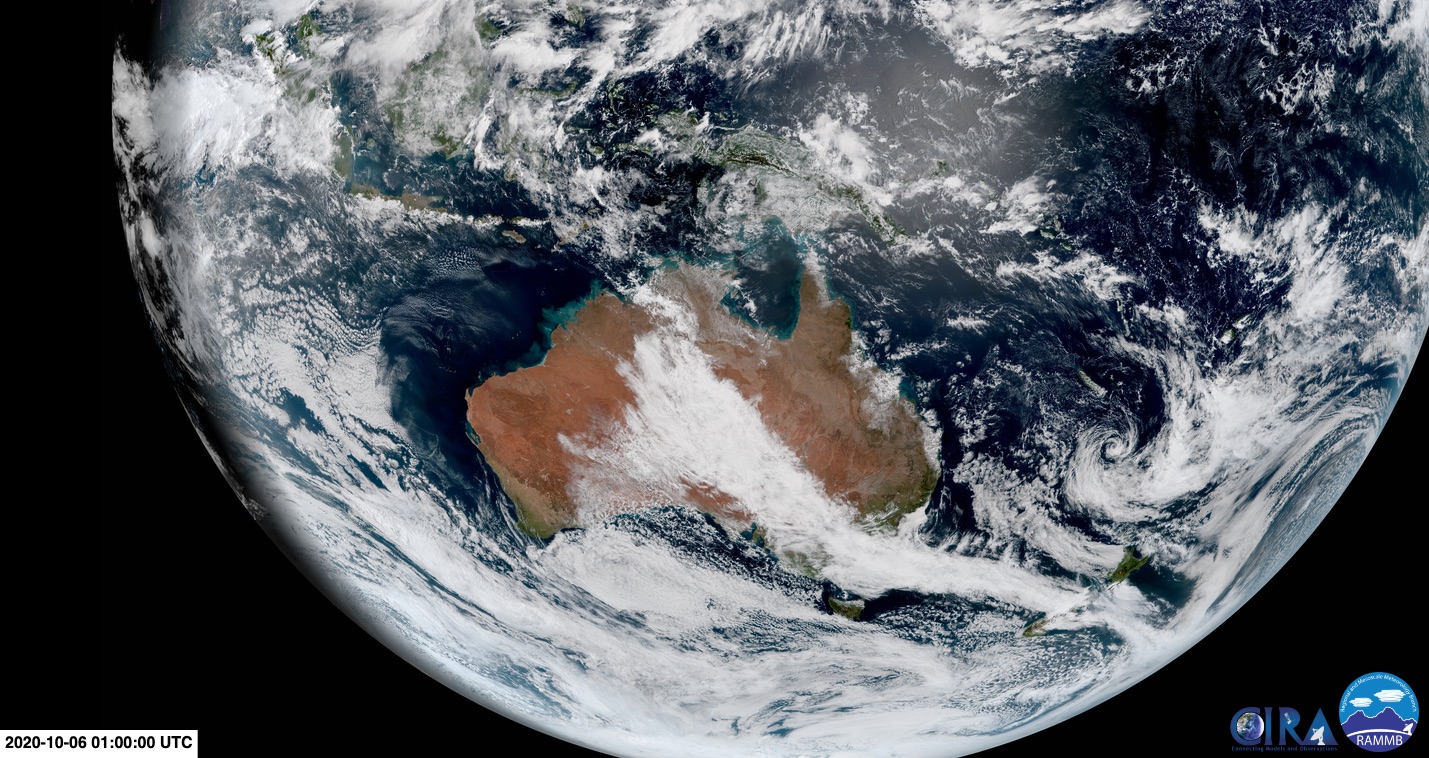 There is a severe weather warning due to heavy rainfall in Mallee, Northern Country, North Central, Wimmera and parts of Central, South West and North East Forecast Districts.

The low pressure system will ill deepen over northernwestern Victoria this evening before tracking south during Thursday, possibly causing flash flooding in some areas.

Brisbane will be partly cloudy. The chance of fog in the west early this morning and a minimum temperature of 16C, maximum of 27C.

Perth will be partly cloudy with a high chance of showers in the southwest, medium chance elsewhere during the evening. Temperatures will range from 10C to 23C in the city.

There is also a strong wind warning for the Eden Coast.

Rain developing, cool in the southeast. Showers, cold in central. Heavy rain, cool-to-cold in the west and north.

Adelaide will be cloudy today with a very high chance of shows minimum of 9C, top of 15C .

There is a strong wind warning for the Spencer Gulf as well as a severe weather warning for Flinders, Mid North, Riverland, Murraylands and North East Pastoral due to heavy rainfall.

A low pressure system will develop near the eastern border of SA on Wednesday and gradually move southeastwards.

Areas of rain will extend across most of South Australia during Wednesday. The heaviest falls are expected across the Flinders district early Wednesday and extending to the remainder of the warning area later on Wednesday.

The rain may lead to flash flooding with six hourly rainfall totals of around 30-50mm possible in some areas.

Thunderstorms are also forecast. Locations which may be affected include Hawker, Port Augusta, Jamestown, Peterborough, Olary and Renmark.

Hobart will be partly cloudy. Areas of frost early this morning. Daytime maximum temperatures between 12C and 17C

There is a strong wind warning in place for the Far North West Coast, Central North Coast and East of Flinders Island today.

Sheep graziers are warned that cold temperatures, heavy rain and strong easterly winds are expected during Wednesday evening and Thursday.

Partly cloudy in Darwin with a high chance of showers, most likely from the late morning.

A thunderstorm is also likely with temperatures between 25C and 33C today.