Sources on the inside told 9News are not allowed to open the windows, which are covered with steel shutters, and doors to the balconies are locked.

A refugee detained in a Brisbane city hotel after being transferred from Manus Island says some fellow residents have been in the facility for more than a year.

The Kangaroo Point Central Hotel and Apartments, which offers hotel rooms for roughly $100 per night, is being used by Home Affairs as an Alternative Place of Detention (APOD) for 80 refugees.

APODs are used to accommodate refugees who are considered to present a minimal risk, including those requiring medical treatment. 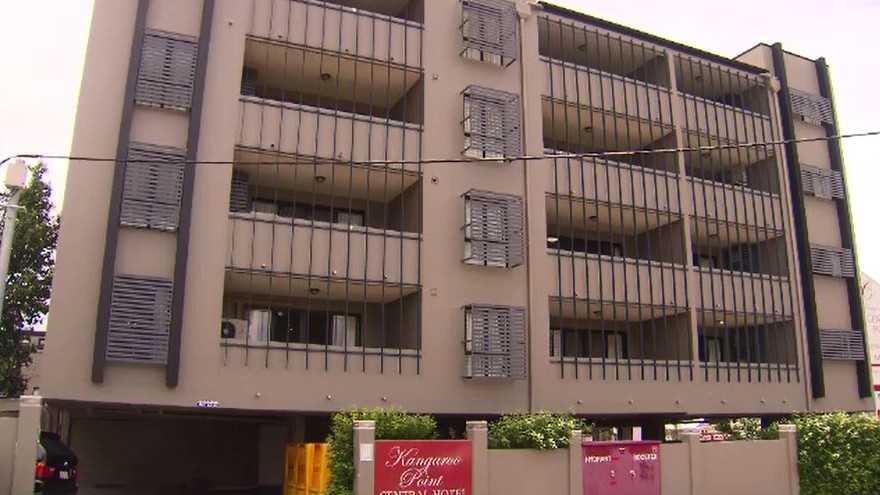 One 36-year-old man told 9News he has been at the facility for seven months after being transferred from Manus Island where he was detained after attempting to travel to Australia in 2013.

"We are here more than seven months, and 10 more people, or 15 people they are staying more than one year," the man, who did not wish to be identified, told 9News via mobile phone after communicating his phone number with hand signals from a window.

"Offshore is better than here, there is no one to help us.

"I just travel to Australia, I'm sorry about that."

Sources on the inside told 9News are not allowed to open the windows, which are covered with steel shutters, and doors to the balconies are locked. The small rooms are guarded 24 hours a day.

A report into immigration detention by the Human Rights Commission last year found hotels were "not appropriate places of detention, given their lack of dedicated facilities and restrictions on access to open space" and recommended they only be used in "exceptional circumstances and for very short periods of time".

No one at the facility could speak to 9News and the hotel's parent company Prime Group Australasia did not respond to requests for comment.

Home Affairs Minister Peter Dutton referred to a department statement that said: "There are a range of services provided at APODs, including health and welfare services and visits. Detainees are able to travel to the closest immigration detention facility on a daily basis to engage in activities, including outdoors activities".