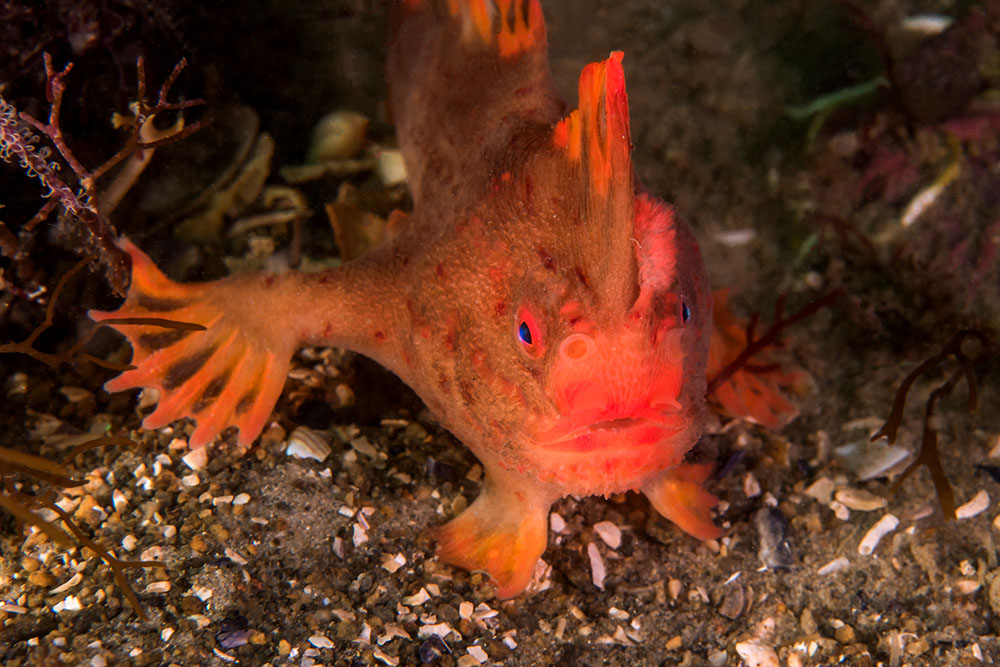 Handfish are considered to be the most threatened family of marine bony fish on the planet – of all those that have been assessed. There are 14 species of handfish and they are only found in Southeastern Australia. Most of them are found in and around Tasmania and nowhere else in the world. Dr Jemina […]

Handfish are considered to be the most threatened family of marine bony fish on the planet – of all those that have been assessed. There are 14 species of handfish and they are only found in Southeastern Australia. Most of them are found in and around Tasmania and nowhere else in the world.

Dr Jemina Stuart-Smith is a research fellow at the Institute for Marine and Antarctic Studies (IMAS) and she spoke recently via zoom in a UTAS presentation titled “Devil in the Detail: Tassie’s threatened species.”

“Handfish are a small marine fish related to anglerfish. Anglerfish have a structure on the top of their head which is called the illicium and, this is thought to function as a type of fishing lure to attract prey,” explained Stuart-Smith

“In the following video of a red handfish, you can see why they’re named handfish – they have distinct fins that resemble hands and they use these for walking across the sea floor rather than swimming like most fish do.”

In early 2020 the International Union for Conservation of Nature, (IUCN), updated their Red List of Threatened Species to include all 14 handfish species. The IUCN Red List, founded in 1964, is the world’s most comprehensive inventory of the global conservation status of biological species. It uses a set of criteria to evaluate the extinction risk of thousands of species and subspecies.

“There are five species listed as data deficient;  which means that we don’t have enough information to be able to tell whether they’re threatened or not. That in itself is something to be concerned about,” said Stuart-Smith.

“There is one species, the Australian handfish, that’s listed as least concern, so it’s not considered to be threatened.

And those three are the ones that I focus on.

The smooth handfish is listed as extinct. This listing was quite a significant milestone as it is the first marine bony fish to be listed as extinct globally. It was last seen in the early 1800s.” In the last 20 years, the Red, the Spotted handfish, the Australian and Ziebell’s, are the only four species that have been observed; and three of those are critically endangered. 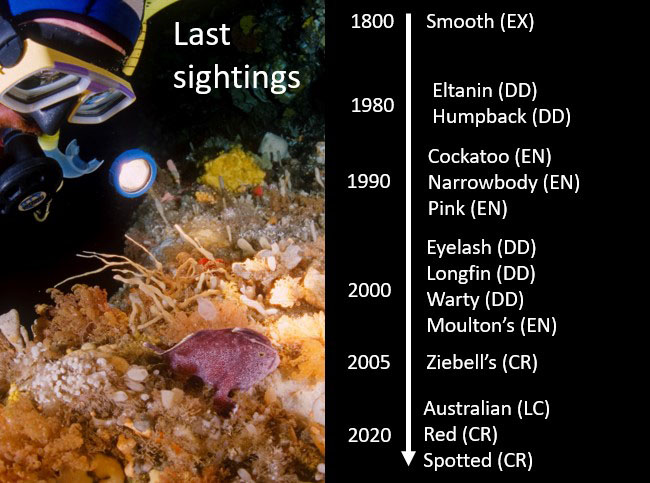 What are the key threatening processes to handfishes?

“Handfish live in a variety of habitats; different species are found in  deep water, shallow water, seaweed and on rocky reef habitats, and some are in sandy, silty areas; so specific threats depend on where they live,” said Stuart-Smith.

“Broadly speaking, the key threats to handfishes include habitat loss and degradation. Things like pollution, siltation, urban development, and the impacts of invasive species, along with changes in ecological interactions. These changes have resulted in imbalances in the ecosystem, and along with these climate change, fishing, and human disturbance are considered significant impacts.”

“Now, you might take a look at those threats and think there are lots of marine species that are subject to those threats. What is it about handfish that makes them particularly vulnerable? Why have they been hit so hard?” said Stuart-Smith.

“Handfish possess a set of life-history characteristics that make them particularly vulnerable to environmental change. They produce few eggs, they have no planktonic larval stage [free flowing bacteria in suspension], and locomotion is by walking. The last two of which mean that their dispersal capability is extremely limited, ” said Stuart-Smith..

If there are impacts on the environment, or if their habitat becomes degraded, they have no way of moving away from those disturbances. On top of that, we now have these small, fragmented, or separated populations with low genetic diversity. And because the populations are small, those threats are now acting across their entire range. This means that there are no insurance populations or populations that are safe from those threats.”

Stuart-Smith’s presentation then moved onto the red handfish which is her prime focus within the Handfish Conservation Project which commenced in late 2018 focusing on the three critically endangered species.

The red handfish is thought to be on the brink of extinction. They are quite a small species,only seven or eight centimeters in length.

When they hatch they’re at about three millimeters, and they live in shallow rocky reefs. They live in seaweed or seagrass, which they use for shelter and to lay their eggs on.

Currently there are thought to be only two small populations with fewer than 100 adults left between them.

We’ve noticed not only are these populations very small, but there’s been a decline in population size coupled with an increase in degradation of their habitat.

What is your team doing about that?

Stuart-Smith and her team are working on a range of conservation strategies, including one called a ‘head-starting’.

“For this, we collected clutches red handfish eggs from the wild, and hatched them in captivity at IMAS,” explained Stuart-Smith. 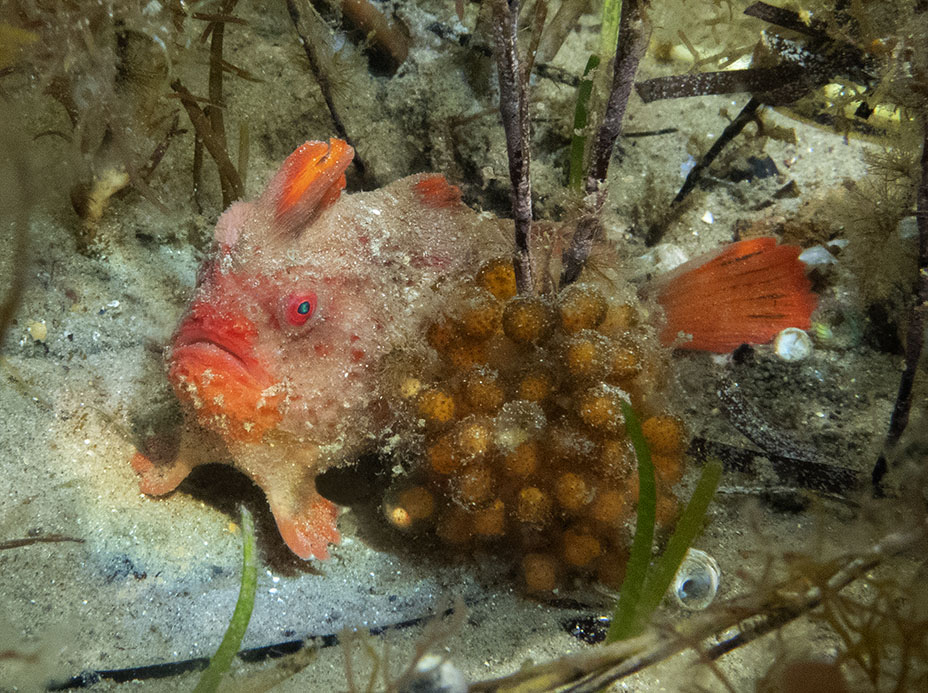 “We’ve been growing the juveniles, or looking after them in captivity. The idea behind this strategy is that you protect the young or the early life stages when they’re at their most vulnerable to things like predation or susceptible to adverse environmental conditions.

The idea is to provide ideal conditions for growth and survival. We are controlling their conditions, limiting the threats, and providing them with an abundant food supply.

This strategy is a, high-risk approach; it’s not one that you would opt into if you had lots of options on the table. It really is a last resort. It’s going well so far; we have over 50 juveniles in captivity, and we’re hoping to do our first release later this year.”

Another important element of this conservation work is managing the key stresses on their habitat.

One of the key stresses is the increase in the native urchins, the short spined urchins which eat the seaweed and the seagrass the handfish need.

The team has been monitoring urchin populations over the past few years through the Reef Life Survey program and in August this year, they implemented the removal of urchins from around the two handfish habitats. This was done through a collaboration with the Tasmanian Commercial Divers Association.

“Our priorities are continuing the head-starting and looking into captive breeding as options for bolstering the wild populations, continuing to monitor those remaining populations while we’re also trying to minimize or mitigate human impacts, and continuing to restore their habitat.”

Along with Lincoln Wong, who is now a PhD candidate with the University of Tasmania and CSIRO, they focused on establishing a population baseline for the spotted handfish in the Derwent Estuary.

“Finding a spotted handfish is hard, I think you really need to train your eye before you start seeing them in the wild and so we like to dive every week during the winter months if the weather allows us to,” said Devine.

“To me, every spotted handfish is important, so it’s always really exciting to see one and photograph it. I find that even though I’m looking for them for a whole 60 minutes underwater, I still get surprised when I see one.

I think it’s because they like to be alone, they sit on the bottom and often don’t move, so you’re stumbling into their quiet, secret world, they could be out on an open sandy plain or hidden amongst the patterned shells and weeds – it’s pretty special.

A few years ago we started our captive breeding program, I’ll never forget that first week. Two fish were found together which is rare, even during breeding season, so they were collected and put into our tank at CSIRO.

A couple of days later I witnessed what we think is the first time, a breeding event in captivity of Spotted handfish. It was an exciting time and I had my camera practically glued to the tank for the next seven weeks capturing the eggs, then eyes and eventually hands inside the eggs.

“Unfortunately I was at sea when the eggs eventually hatched, but it was quite a sight a few weeks later, to see these beautiful juveniles up close, not yet more than a couple of millimetres long,” said Devine. 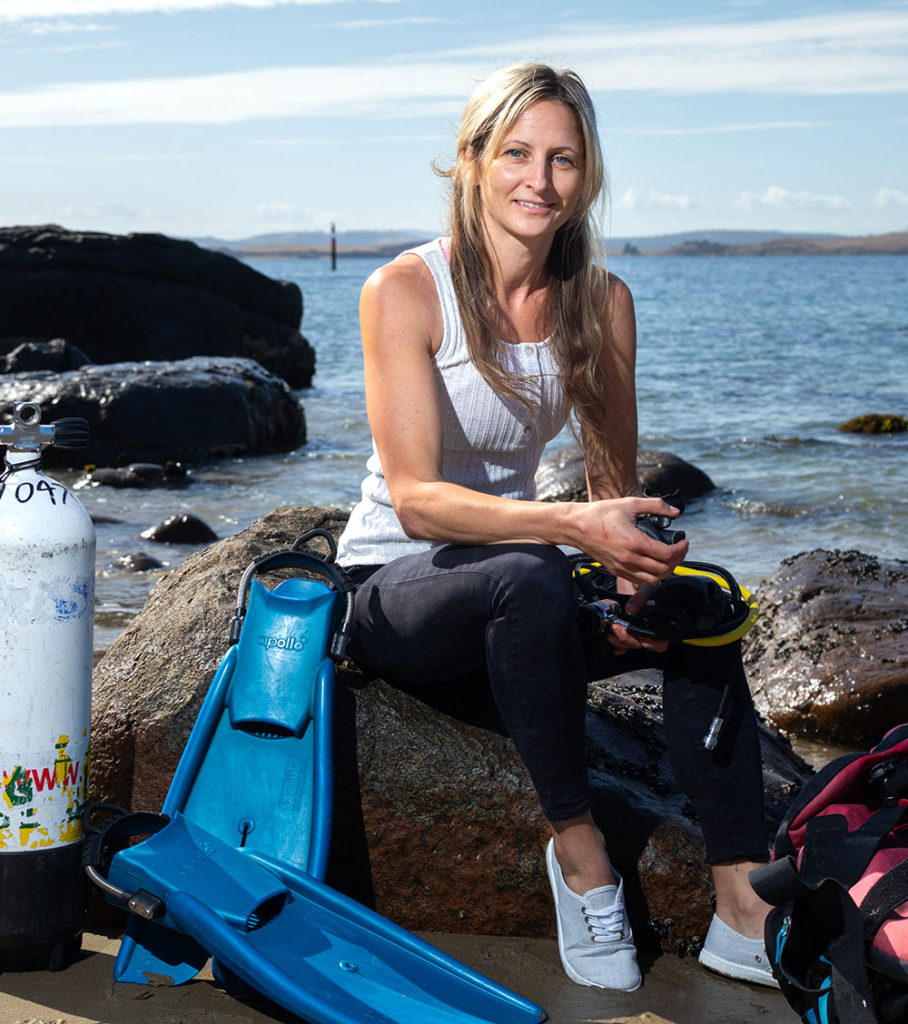 Dr Jemina Stuart-Smith is a research fellow at the Institute for Marine and Antarctic Studies.

She is interested in marine ecology, marine biodiversity monitoring and conservation, the role of citizen scientists in data collection and the education of marine issues.

Jemina’s research involves marine monitoring, citizen science and changes in marine biodiversity. She is Chair Handfish Conservation Project, IMAS & CSIRO coordinates within the marine biodiversity hub of the National Environmental Science Program, which is funded by the Commonwealth. 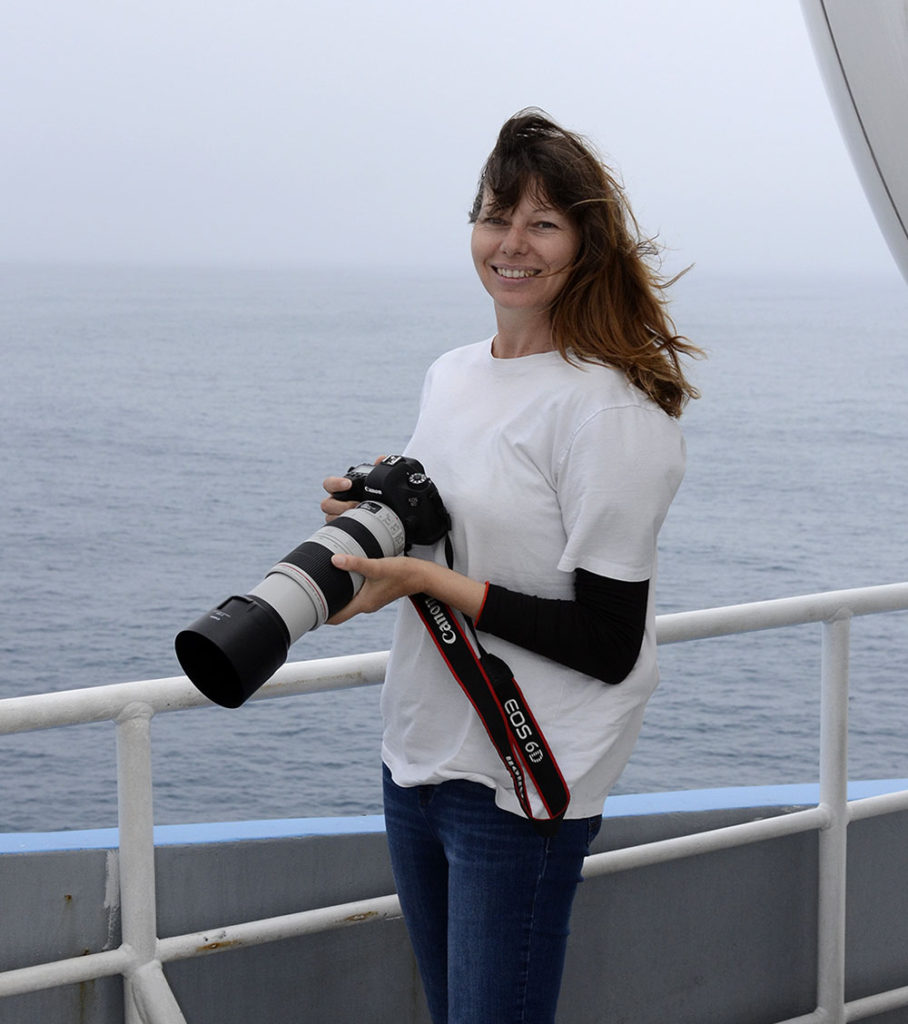 Carlie Devine has been working at CSIRO as a photographer, scientific diver and research technician since 2011.