For most parents, their child's second birthday is one of the many exciting milestones of toddlerhood - a chance to share a toast with friends and family and look forward to a future filled with possibilities.

For Queensland parents Kellee and Jamie Clarkson, it's a date that fills them with dread.

Their 18-month-old daughter Wynter has spinal muscular atrophy (SMA), a degenerative genetic disorder that attacks the motor neurons in her spine, progressively weakening her muscles and shutting down movement.

Without treatment, children like Wynter with type 1, the most severe form of the disease, will never sit up, crawl or walk and won't live to see their second birthday. 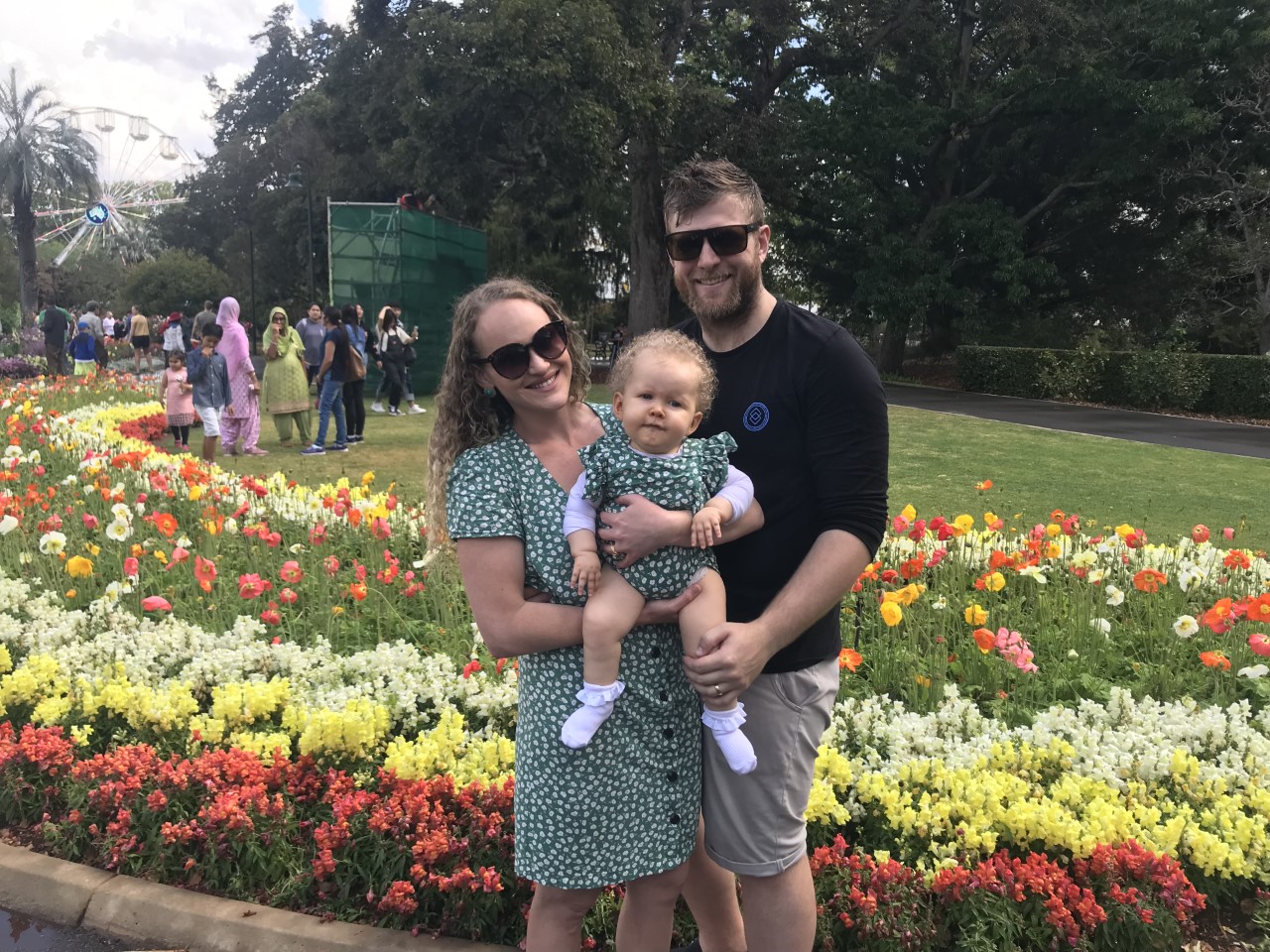 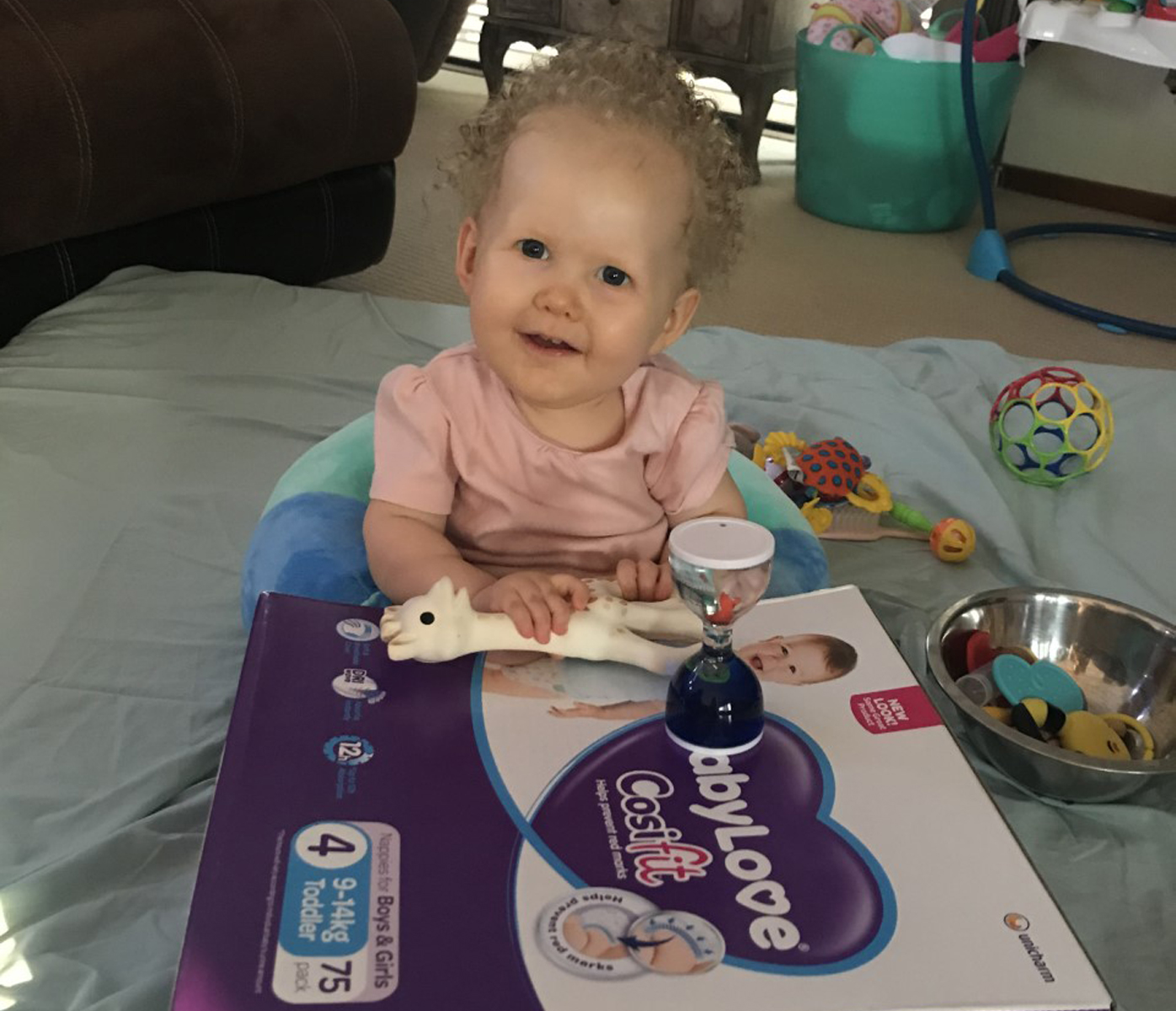 A revolutionary new gene therapy called Zolgensma is Wynter's best chance at a life free of wheelchairs, breathing apparatus and thrice-yearly lumbar punctures that leave her screaming for help – but she only has until she turns two.

With a staggering price-tag of $US2.1 million ($AU3.2 million), Zolgensma is the world's most expensive single-dose medication.

So far, the gene therapy is only available through health care in the United States, with Japan on Wednesday becoming the second country to approve the drug for children under two.

"It's such a long shot – it would be like winning the lottery," Wynter's mum Kellee told 9News.

"But Jamie and I won't give up – we will pursue every avenue we can."

The couple, who live just outside of Toowoomba, embarked on a fundraising drive last November in a desperate bid to raise the money, but the $66,000 they've raised falls far short of the jaw-dropping sum they need.

Their best hope now lies in a global lottery-style draw announced by drug's developers Novartis in December, offering 100 doses of the drug for free in 2020 to children under two years old.

But with roughly 60,000 children diagnosed worldwide every year, the chances of being drawn remain slim.

The first names have already been selected in a series of fortnightly draws, but the drug company is remaining tight-lipped on where the patients are located and how many children have missed out. 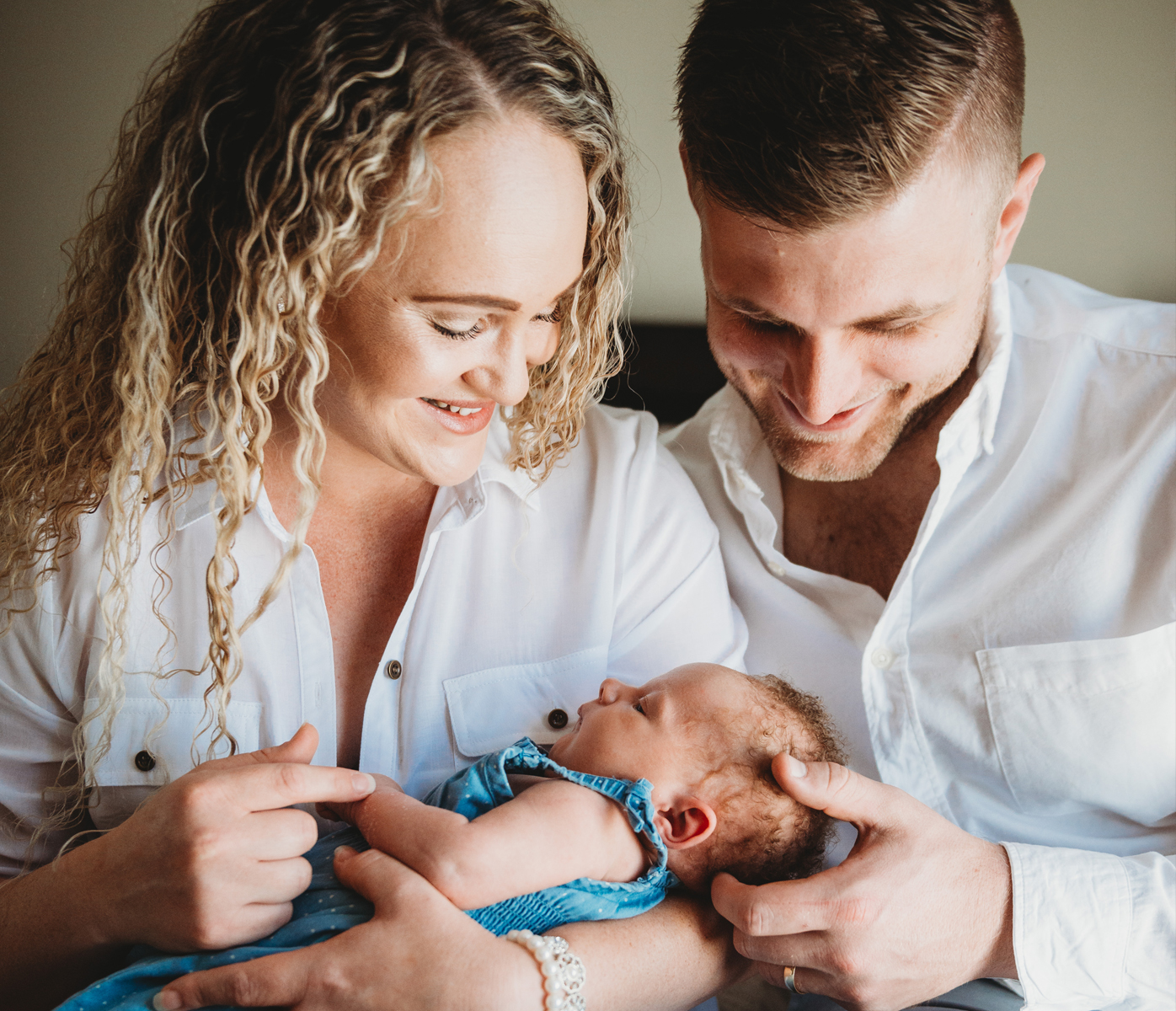 UK patient group TreatSMA applauded the company's effort to offer the drug for free, but said it was "yet to be convinced that a health lottery is an appropriate way of meeting the unmet medical needs in this severe disease".

Five European nations went further, with the health ministers of Ireland, Austria, Belgium, Luxembourg and the Netherlands issuing a rare joint statement condemning the program's uncertainty and lack of transparency as "unacceptable".

For parents, competing against other desperate families to gain treatment at the expense of others also comes at a psychological cost.

"It plays with your emotions," Kellee said.

"It's so hard that there is such a big amount of money involved to give your child the best life, and it's just by chance that your child could get this drug."

He told 9News the company had sought advice from bioethicists as well as doctors and patient advocates before launching the program, and they had concluded this was the best way to ensure equity regardless of country of residence and capacity to pay.

With only one facility currently approved to manufacture the drug, they simply can't produce enough doses quickly enough to provide one to every child.

As they wait and hope for a miracle, life for the Clarksons centres around a gruelling schedule of daily physio exercises, fortnightly occupational therapy and speech therapy visits and the daily battle to keep Wynter from getting sick.

"Wynter can't sit on her own, she can't crawl, she obviously can't walk... She needs help with everything. I would do it to the day I die, but it's so hard to watch other kids be able to do those things," mum Kellee said. 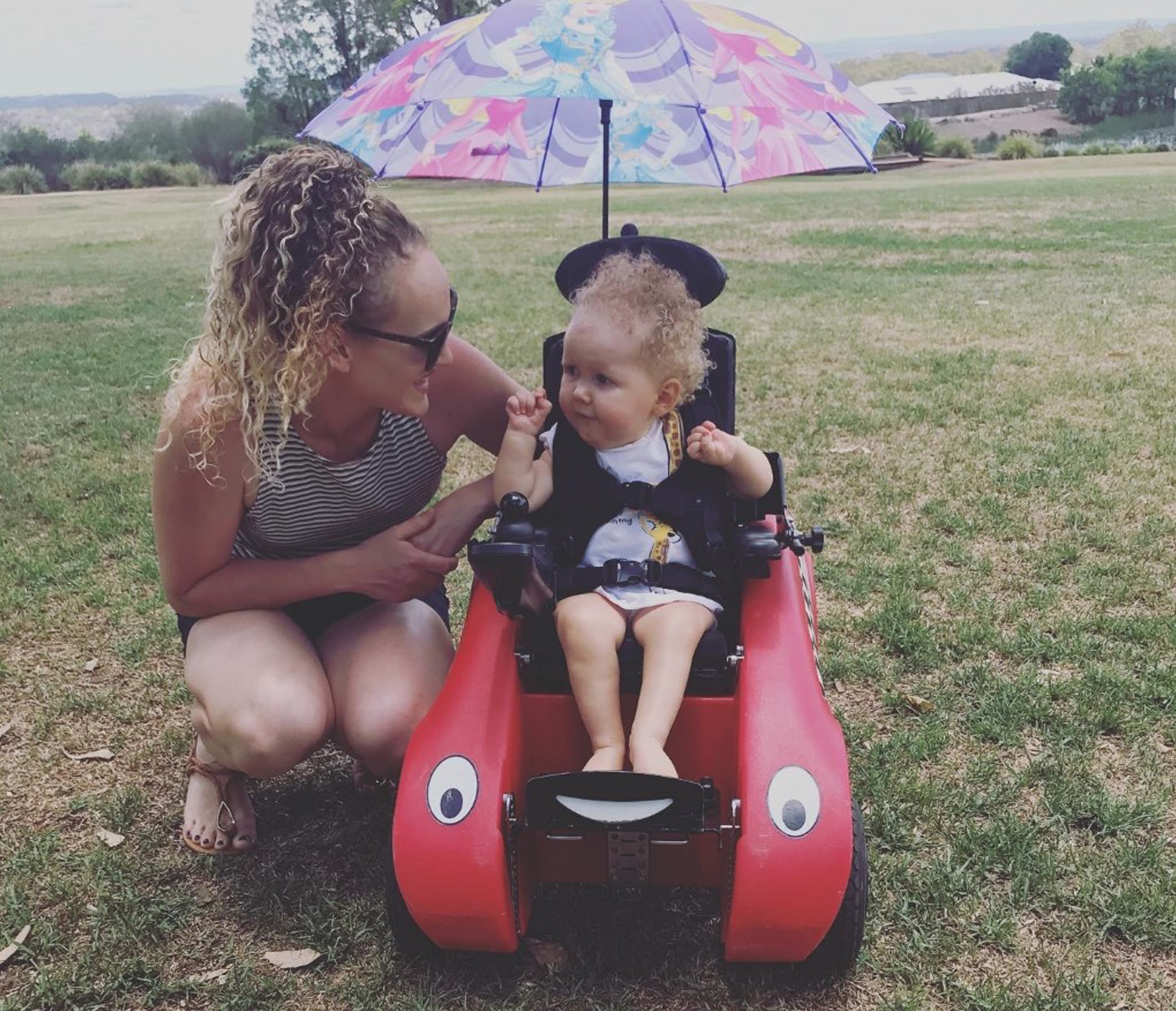 As well as impacting gross motor skills, SMA can affect the muscles used for swallowing and breathing, meaning Wynter needs a BiPAP machine when she sleeps and finds the seemingly simple task of eating exhausting.

"We spend a lot of time trying to get her enough nutrition. It takes a lot out of her to eat – it's like running a marathon," Kellee explained.

"Wynter at the moment is really struggling with her weight gain and it is a real possibility that she will have to have a gastric tube put in."

With SMA affecting Wynter's ability to cough and expel mucus, even going outside and playing with other children can have life-threatening implications.

"We're constantly worried about her getting sick. I'm constantly thinking about 'oh I don't want to go to the shopping centre because she could get a cold and die'," Kellee said.

That almost became a reality last year, when Wynter caught the common cold and ended up in ICU for two weeks fighting for life.

"She required lots of deep suctioning to the lungs, they put a catheter down her nose and mouth and she was on a BiPAP 24/7," Kellee said.

"It was the most traumatic, distressing experience of my life and my husband's."

Currently, the only medication available to treat SMA in Australia is Spinraza, a drug that has halted the devastating progression of Wynter's disease but has failed to give her back her compromised lung and swallowing functions.

It also means hospital visits every four months for the rest of her life.

"They can't give them any anaesthetic and she has to have it awake."

"It is absolutely horrendous to watch. As a parent, it just absolutely crushes you to see your child in pain and looking at you and wondering why you're allowing this to happen."

Patient advocacy group SMA Australia's Julie Cini said she understood the Clarkson's desperation to access Zolgensma, but the harsh reality was that some children would miss out while the drug was pending approval in Australia.

"It's like dangling a carrot in front of someone and then chucking it in the bin," she said.

Ms Cini is currently working to have the gene therapy approved under the Pharmaceutical Benefits Scheme, which would allow every child in Australia to access the drug.

Novartis applied to the Therapeutical Drug Administration in late 2019, but approval could still take many months, even years.

While paralysing her body, SMA has left Wynter's mind untouched, and Kellee says she remains a bright and bubbly toddler with a brilliant sense of humour.

"She has a very funny personality, she's very bright. A very happy little girl – loves to dance, loves to laugh. She's at that stage where she's getting cheeky in a good way.

"She's got a powered wheelchair she drives around perfectly – she doesn't know any different. 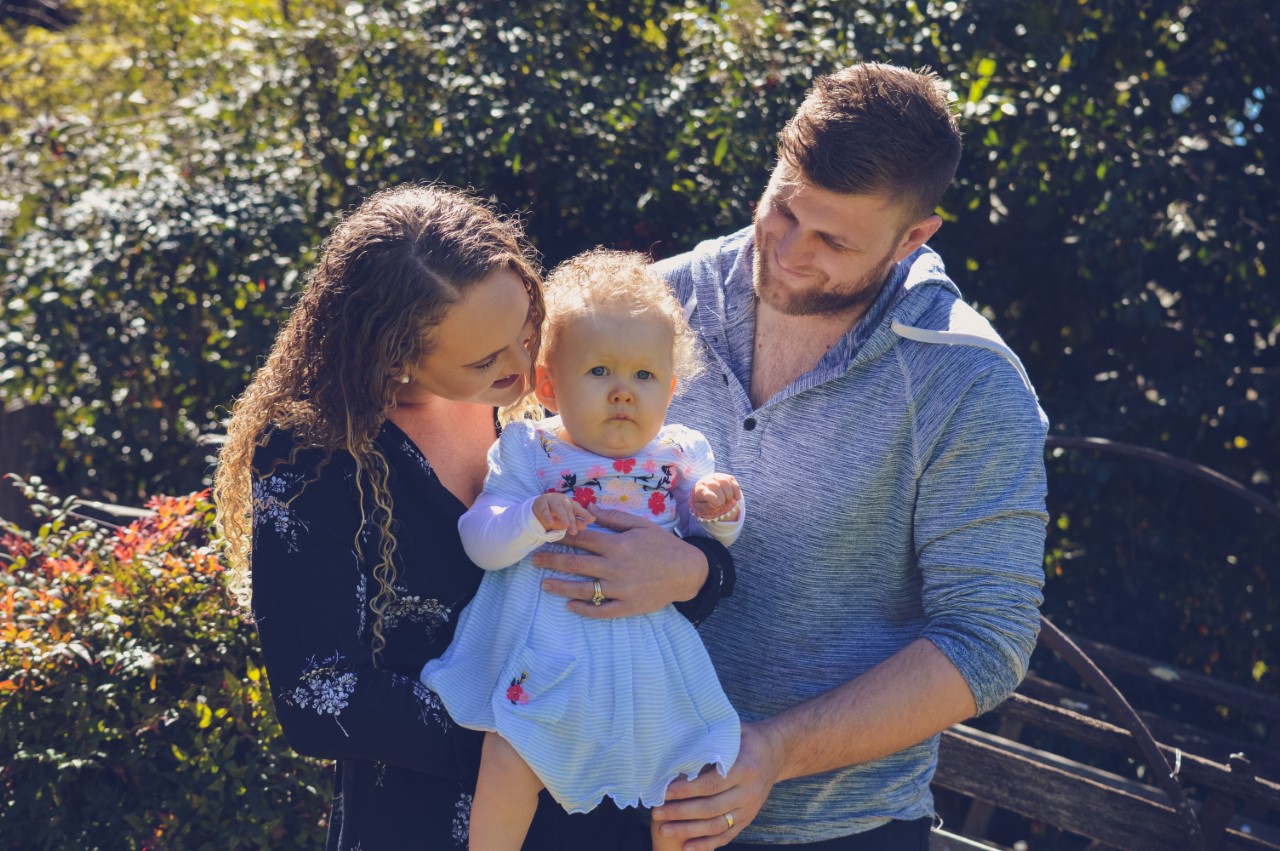 SMA advocate Ms Cini said it was important to remember just how far treatment had come.

She knows all too well the gut-wrenching trauma of watching your child's slowly but inevitable progress towards death.

Ms Cini's daughters were born with type 1 SMA in 2005 and 2007, before the life-saving drug Spinraza was developed.

"I look at Wynter every single day and I see what I couldn't see in my children," Ms Cini said.

"What she can do is phenomenal – my kids couldn't do what she's doing. My outcome was death. The (Clarksons) have a chance to have a life with their child."

Ms Cini is optimistic that new treatments and early detection could see a future where those with SMA, even in its most severe form, could live long and independent lives.

A national newborn screening program to detect SMA before symptoms take hold – vital in limiting the disease's progress - is currently being piloted in NSW.

"Hopefully, when drugs like Zolgensma get passed, we're able to treat our kids within the first two weeks of life," she said.

"I can see the future of SMA, I'm going to walk in to a room and I won't even know which kid has it."