A 437-million-year old scorpion was the earliest known creature to venture from sea onto land, a new study has found, shedding new light on one of the earliest chapters in the planet’s evolutionary history.

A 437-million-year old scorpion was the earliest known creature to venture from sea onto land, a new study has found, shedding new light on one of the earliest chapters in the planet's evolutionary history.

Scientists believe the fossilized remains of the prehistoric scorpion are the oldest known example of an air-breathing animal although Andrew Wendruff, a paleontologist at Otterbein University in Westerville, Ohio, said it's not known how the creature would have divided its time between land and sea.

"We have the preservation of the internal structure. They were just like modern scorpions in that they were doing the same things -- they were more than likely breathing air," said Wendruff, the author of the study that published Thursday in the journal Scientific Reports. 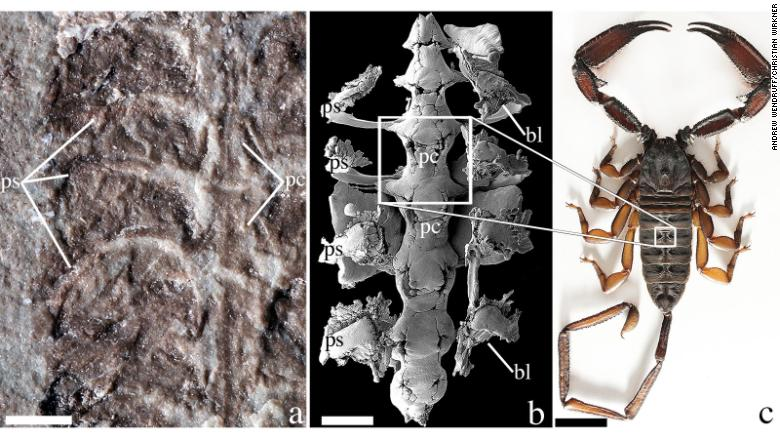 While there was no "unambiguous evidence" that this prehistoric scorpion, officially known as Parioscorpio venator, was terrestrial, Wendruff said it "had the capability to breathe on land and surely would have come onto land."

No lungs or gills can be seen in the fossils, but their similarity to horseshoe crabs, which can breathe on land, suggests that while the oldest scorpions may not have been fully terrestrial, they may have forayed onto land for extended periods of time, the study suggested.

All other animal fossils discovered before this time have been from animals that lived and breathed under water. A prehistoric millipede had previously been thought to be the first to make the shift to land, but they were 16 to 17 million years younger, Wendruff said.

"This is literally when the only things on land were plants and proto plants. It's way before the fish that pushed itself onto land and way before dinosaurs," he said. "There's no animals on land that we know of." 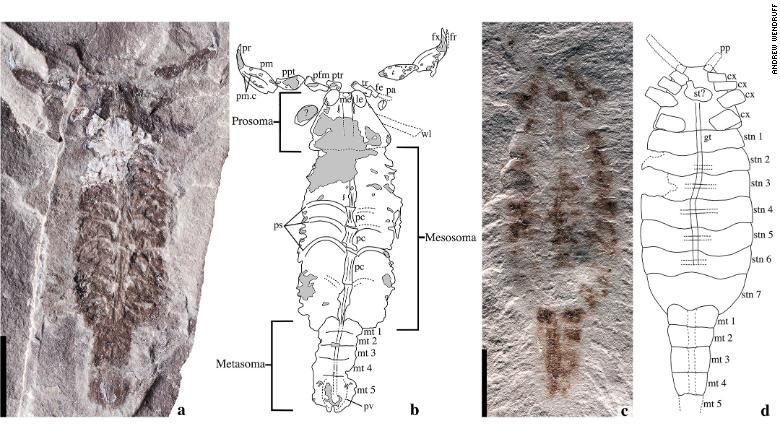 With its distinctive stinger at the end of its tail, the prehistoric scorpion is largely indistinguishable from present-day cousins but Wendruff said it was impossible to know whether it would have used venom.

The fossils were among many dug up from a quarry in Wisconsin in the 1980s and had been stored at a museum at the University of Wisconsin before Wendruff re-examined them as part of his PhD. He was surprised to discover the two well-preserved scorpion fossils that showed elements of the animal's circulatory, respiratory and digestive system.

The ancient creatures would have been about 2 centimeters long. Fossils have shown that some prehistoric scorpion-like creatures were six-foot long although they never left the sea, went extinct and have no link with modern-day scorpions.