The captain of a scuba diving boat that caught fire and sank off the coast of California last year, killing 34 people who were trapped below deck, has been indicted on federal manslaughter charges for one of the deadliest maritime disasters in recent US history.

The captain of a scuba diving boat that caught fire and sank off the coast of California last year, killing 34 people who were trapped below deck, has been indicted on federal manslaughter charges for one of the deadliest maritime disasters in recent US history.

Jerry Boylan, 67, was charged with 34 counts of seaman's manslaughter for "misconduct, negligence and inattention" by failing to train his crew, conduct fire drills and have a roving night watchman on the Conception when fire broke out on September 2, 2019, the indictment said.

"As a result of the alleged failures of Captain Boylan to follow well-established safety rules, a pleasant holiday dive trip turned into a hellish nightmare as passengers and one crew member found themselves trapped in a fiery bunkroom with no means of escape," US Attorney Nick Hanna said in a statement.

Mr Boylan and four other crew members, who had all been sleeping, escaped from the flaming boat after he made a breathless mayday call.

All 33 passengers and one crew member perished in the bunkroom.

Some of the dead were found with their shoes on, leading to speculation they were trying to escape but were trapped by flames that blocked a stairwell and a small hatch that were the only exits to the deck above.

All died of smoke inhalation, according to coroner's reports.

The rare federal charges against Mr Boylan were brought under a pre-Civil War law aimed at holding steamboat captains and crew responsible for watery disasters that were far more frequent at the time.

Each count carries a possible 10-year prison term with conviction.

Federal prosecutors said they had informed Mr Boylan's attorneys of the indictment, and he was expected to surrender to federal authorities in the coming weeks.

A public defender who represents Mr Boylan did not immediately return phone and email messages seeking comment from The Associated Press.

His former defence lawyer, Michael Lipman, said they had expected the charges for more than a year.

Federal safety investigators faulted the owners of the vessel for a lack of oversight, but they were not charged with any crime, though the investigation is ongoing.

"I hate the term accident in this case because, in my opinion, it is not an accident if you fail to operate your company safely," National Transportation Safety Board member Jennifer Homendy said at a hearing in October.

The company that owned the boat, Truth Aquatics Inc, has filed suit in federal court under a provision in maritime law to avoid payouts to the families of the victims.

The families of 32 victims have filed claims against boat owners Glen and Dana Fritzler and the company.

The cause of the fire has been under investigation for more than a year and may be impossible to pinpoint.

It began in an area on the main deck where divers had plugged in phones, flashlights and other items with combustible lithium ion batteries.

The fire happened on the final night of a three-day Labor Day weekend scuba diving excursion near Santa Cruz Island off Santa Barbara. 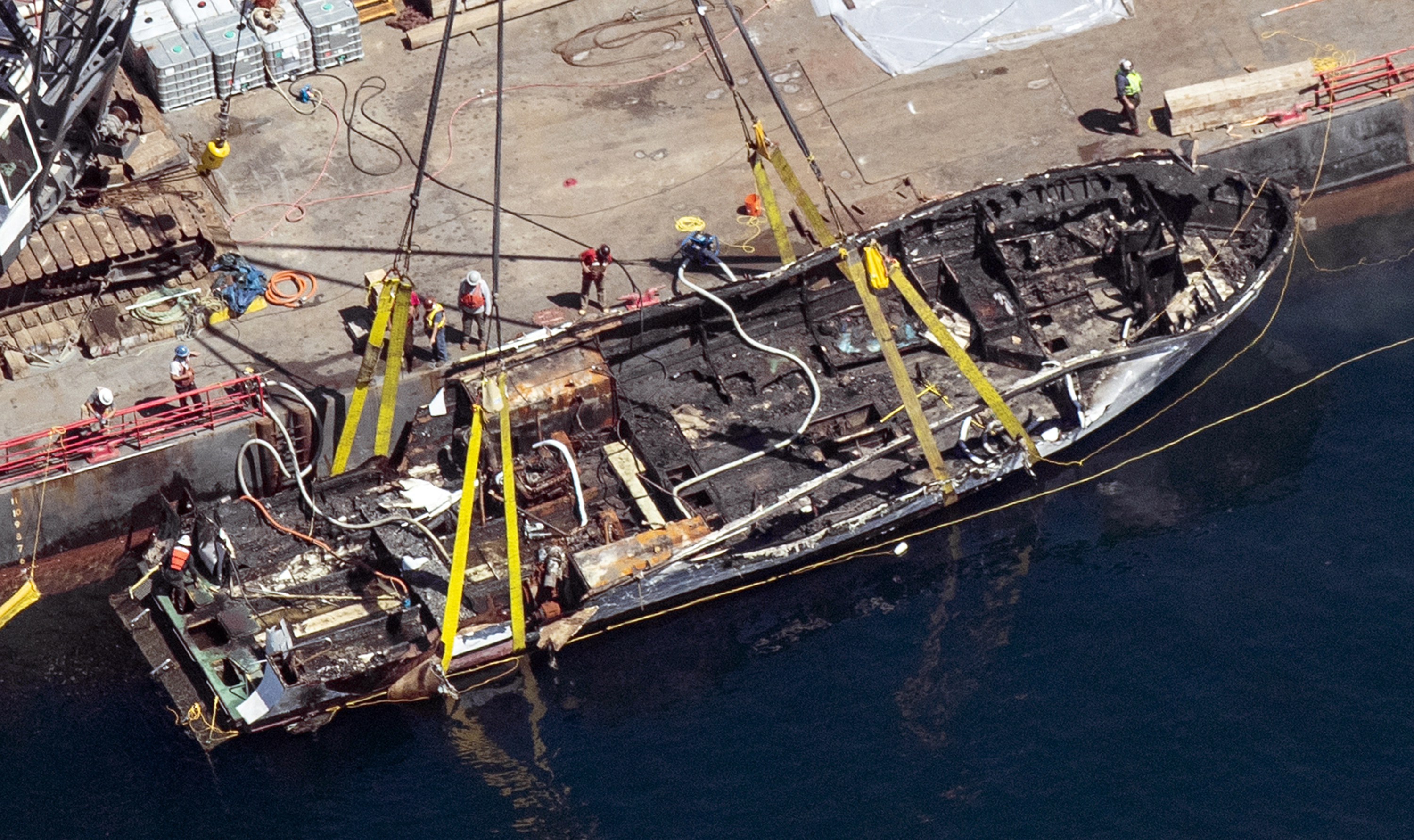 The 34 victims ranged from a new deckhand to scientists and engineers to parents with their teenage and adult children.

They came from as far away as China, Singapore and India. Two passengers were celebrating birthdays.

The sole crew member who died, Allie Kurtz, 26, had previously worked as a cook on another Truth Aquatics boat and was thrilled with her promotion.

Her family said she loved the water and had childhood aspirations of becoming a pirate.

Marine biologist Kristy Finstad, who co-owned Worldwide Diving Adventures and chartered the Labor Day Weekend trip, first put on a dive tank at the age of nine and had done hundreds of dives in the rugged, wind-swept Channel Islands, off Santa Barbara's coast.

Five members of the Quitasol family took the trip to celebrate their father's birthday.

The family had been scuba diving together for at least a decade.

Jeffrey Goodman, a lawyer representing families of nine victims, said he hadn't had a chance to speak with his clients yet, but they had expected charges to be filed.

"The negligence and outrageous conduct of both Captain Boylan, as well as the shoreside personnel, is clear, so it's not surprising to see the US attorney's (office) concluded a criminal prosecution is appropriate," Mr Goodman said.

Before the disaster, Mr Boylan and Truth Aquatics had a good reputation with customers and the boating community in Santa Barbara, where the company had a fleet of three boats.

The Conception had passed its two most recent Coast Guard safety inspections.

But NTSB investigators condemned the company and captain for a litany of issues including failing to train the crew on emergency procedures.

Ryan Sims, who had been working aboard the boat for just three weeks, told investigators he had asked the captain to discuss emergency plans the day before the fire.

"When we have time," Mr Boylan replied, Mr Sims reported.

"I didn't know what the procedures were supposed to be," Mr Sims said, echoing what other crew members told investigators.

The NTSB said the lack of a night watch allowed the fire to spread quickly and trap victims below deck.

The agency also faulted the Coast Guard for not enforcing the night watch requirement, citing records showing no one cited for failing to provide one since 1991.

Crew members told investigators they were asleep on the upper deck when the fire broke out below around 3am.

They said they made repeated attempts to reach those below deck.

But the flames and heat kept them back and eventually forced them to jump overboard.

Mr Boylan made a mayday call at 3.14am saying, "I can't breathe," before abandoning ship.

Mr Sims, who has sued the boat's owners, broke a leg jumping from the boat.

The crew climbed into a dinghy and motored to a yacht anchored nearby to call again for help.

"One thing we never heard was any screams or banging or anything from the boat, both while we were on it or when we were close," Cullen Molitor, the boat's second captain, told investigators.