Pope Francis arrived in Baghdad on Friday to kick off the first-ever papal visit to Iraq and marking his first international trip since the start of the COVID-19 pandemic.

Pope Francis arrived in Baghdad on Friday to kick off the first-ever papal visit to Iraq and marking his first international trip since the start of the COVID-19 pandemic.

The 84-year-old will urge the country's dwindling number of Christians to stay put and help rebuild the country after years of war and persecution, brushing aside coronavirus and security concerns. 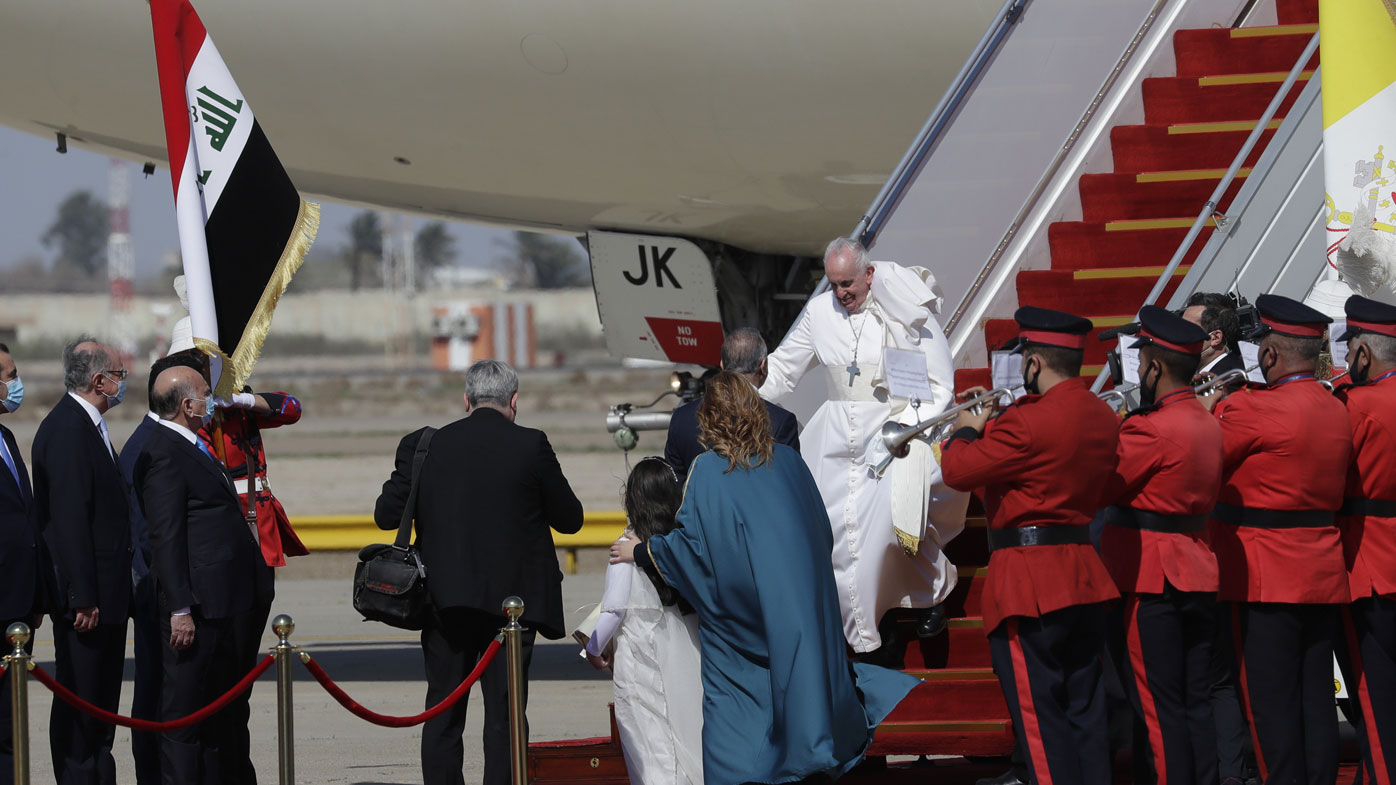 Iraqis were keen to welcome him and the global attention his visit will bring, with banners and posters hanging high in central Baghdad, and billboards depicting Francis with the slogan "We are all Brothers" decorating the main thoroughfare.

In central Tahrir square, a mock tree was erected emblazoned with the Vatican emblem, while Iraqi and Vatican flags lined empty streets.

Iraqi Foreign Minister Fuad Hussein said Iraqis were eager to welcome Francis' "message of peace and tolerance" and described the visit as a historic meeting between the "minaret and the bells."

Among the highlights of the three-day visit is Francis' private meeting Saturday with the country's top Shiite cleric, Grand Ayatollah Ali al-Sistani, a revered figure in Iraq and beyond. 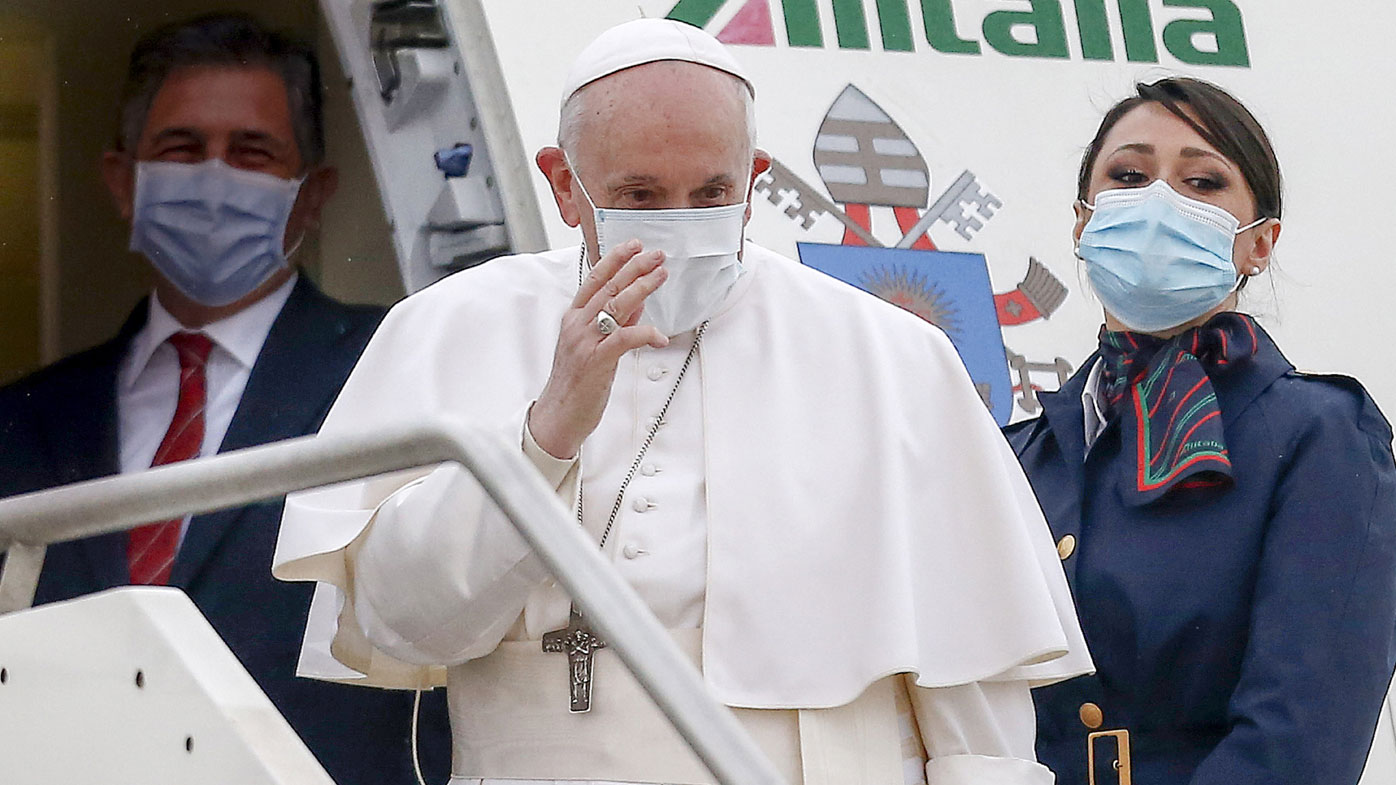 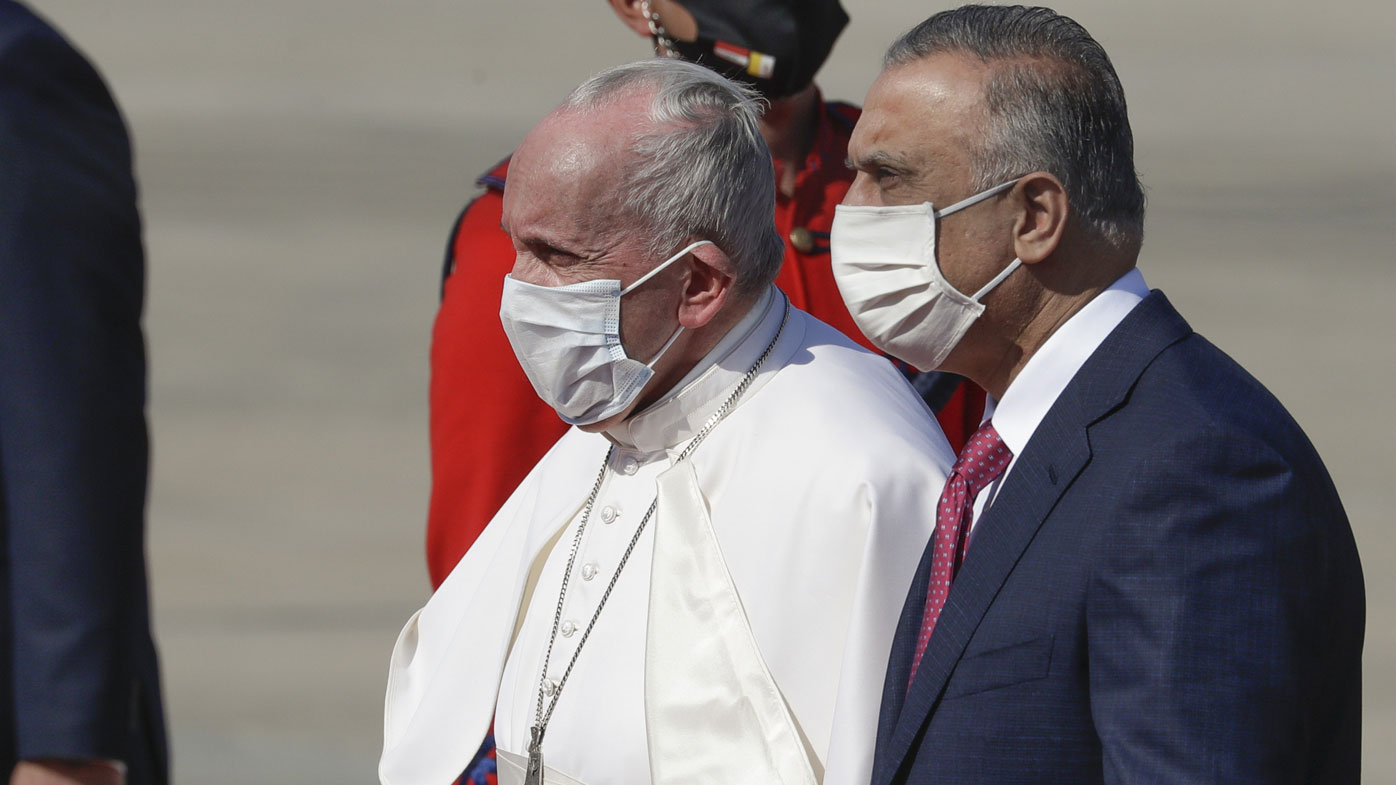 The government is eager to show off the relative security it has achieved after years of wars and militant attacks that nevertheless continue even today. Francis and the Vatican delegation are relying on Iraqi security forces to protect them, including with the expected first use of an armoured car for the pope-mobile-loving pontiff.

"This visit is really important to us and provides a good perspective of Iraq because the whole world will be watching," he said. The high stakes will give Iraqi forces "motivation to achieve this visit with safety and peace."

Francis is breaking his year-long COVID-19 lockdown to refocus the world's attention on a largely neglected people whose northern Christian communities, which date from the time of Christ, were largely emptied during the violent Islamic State reign from 2014-2017.

For the pope, who has often travelled to places where Christians are a persecuted minority, Iraq's beleaguered Christians are the epitome of the "martyred church" that he has admired ever since he was a young Jesuit seeking to be a missionary in Asia. 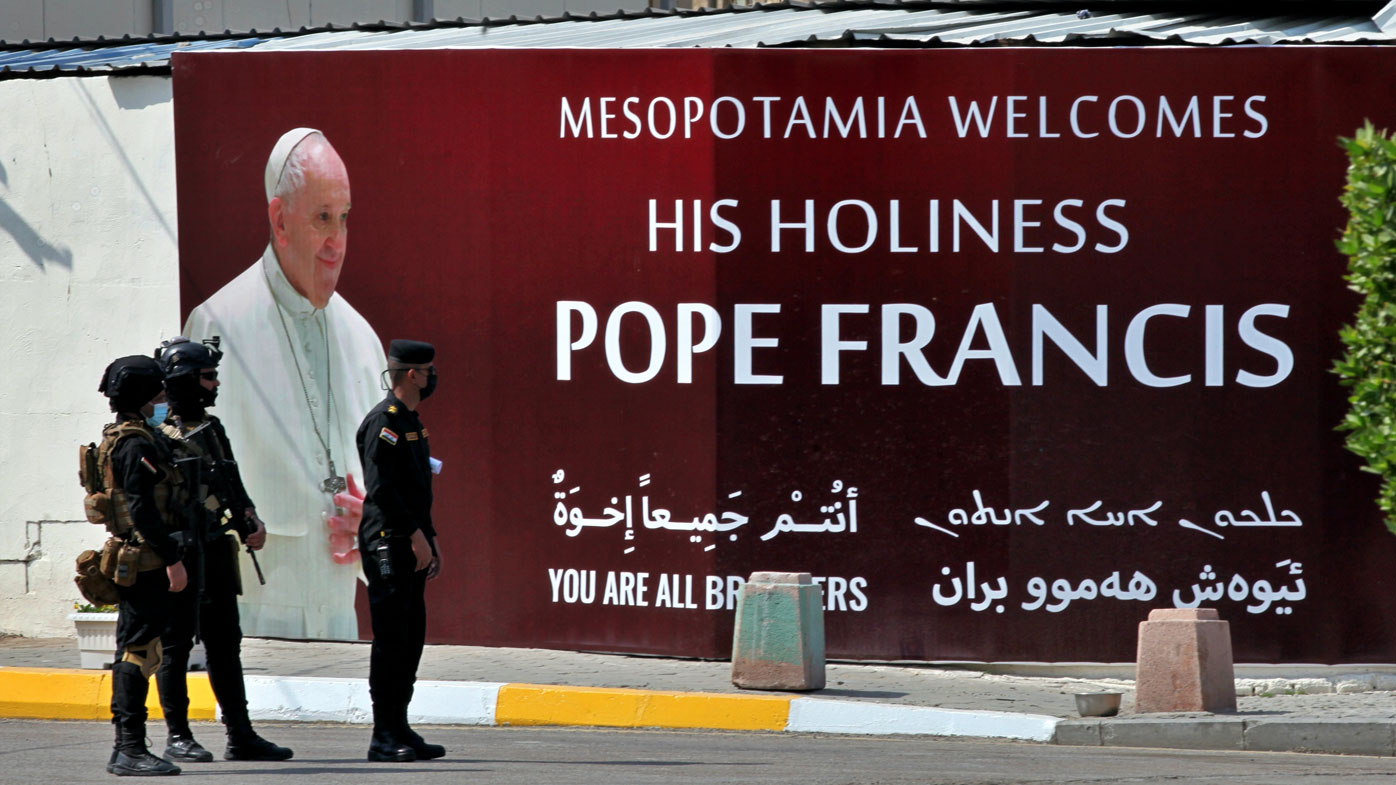 In Iraq, Francis is seeking to not only honour its martyrs but deliver a message of reconciliation and fraternity. The few Christians who remain in Iraq harbour a lingering mistrust of their Muslim neighbours and face structural discrimination long predating both IS and the 2003 US-led invasion that plunged the country into chaos.

"The Pope's visit is to support the Christians in Iraq to stay, and to say that they are not forgotten," the Chaldean patriarch, Cardinal Luis Sako, told reporters in Baghdad this week. The aim of Francis' visit, he said, is to encourage them to "hold onto hope."

The visit comes as Iraq is seeing a new spike in coronavirus infections, with most new cases traced to the highly contagious variant first identified in Britain. The 84-year-old pope, the Vatican delegation and travelling media have been vaccinated; most Iraqis have not.

Ahead of the pope's arrival Friday, dozens of men, women and children gathered in a Baghdad church, many not wearing masks or observing social distancing, before boarding buses to the airport to welcome the pontiff.

The Vatican and Iraqi authorities have downplayed the threat of the virus and insisted that social distancing, crowd control and other health care measures will be enforced. The Vatican spokesman, Matteo Bruni, said this week the important thing is for Iraqis to know that the pope came to Iraq as an "act of love."

"I come among you as a pilgrim of peace, to repeat 'you are all brothers,'" Francis said in a video-message to the Iraqi people on the eve of his visit. "I come as a pilgrim of peace in search of fraternity, animated by the desire to pray together and walk together, also with brothers and sisters of other religious traditions."

Christians once constituted a sizeable minority in Iraq but their numbers began dwindling after the 2003 US-led invasion. They fell further when IS militants in 2014 swept through traditionally Christian towns across the Nineveh plains. Their extremist brand of Islam forced residents to flee to the neighbouring Kurdish region or further afield. 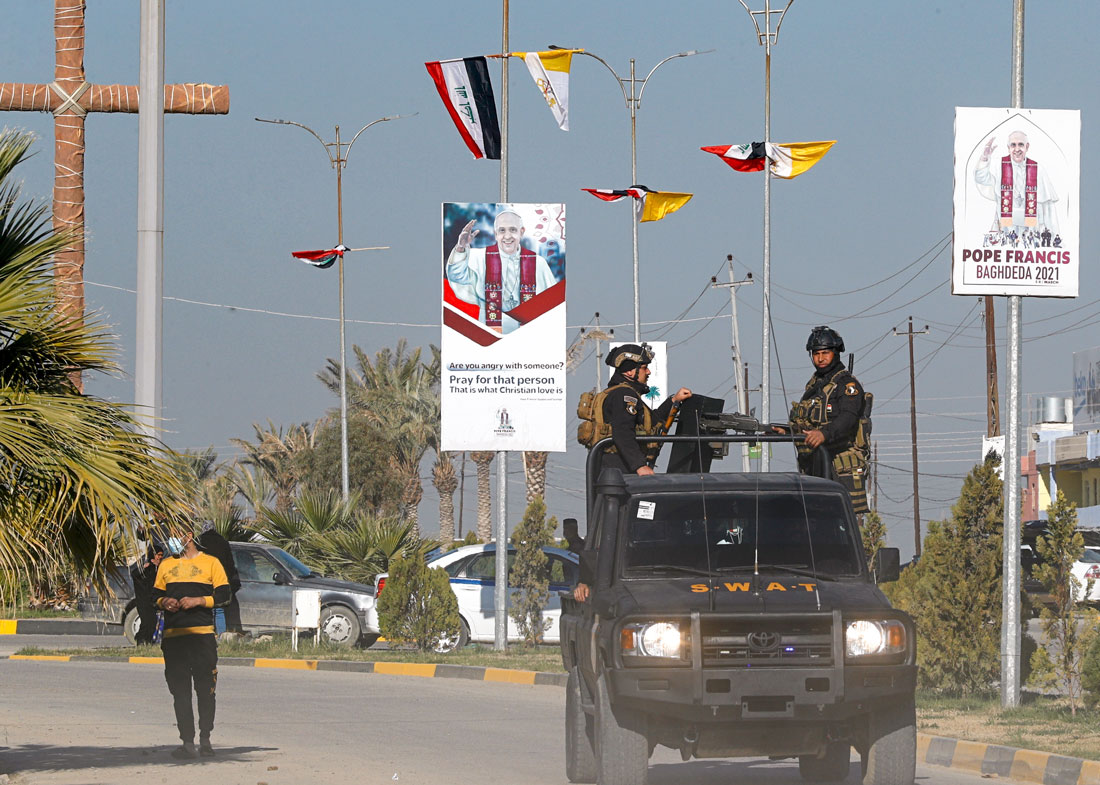 Few have returned, and those who have found their homes and churches destroyed.

Returnees have had to contend with more struggles. Many cannot find work and blame discriminatory practices in the public sector, Iraq's largest employer. Since 2003, public jobs have been mostly controlled by majority Shiite political elites, leaving Christians feeling marginalised.

While hard numbers are hard to come by, there were an estimated 1.4 million Christians in Iraq in 2003. Today the number is believed to be around 250,000.

During his visit, Francis will pray in the Baghdad church that was the site of one of the worst massacres of Christians, the 2010 attack by Islamic militants that left 58 people dead. He will honour the dead in a Mosul square surrounded by shells of destroyed churches and meet with the small Christian community that returned to Qaraqosh. He will bless their church, which was used as a firing range by IS. 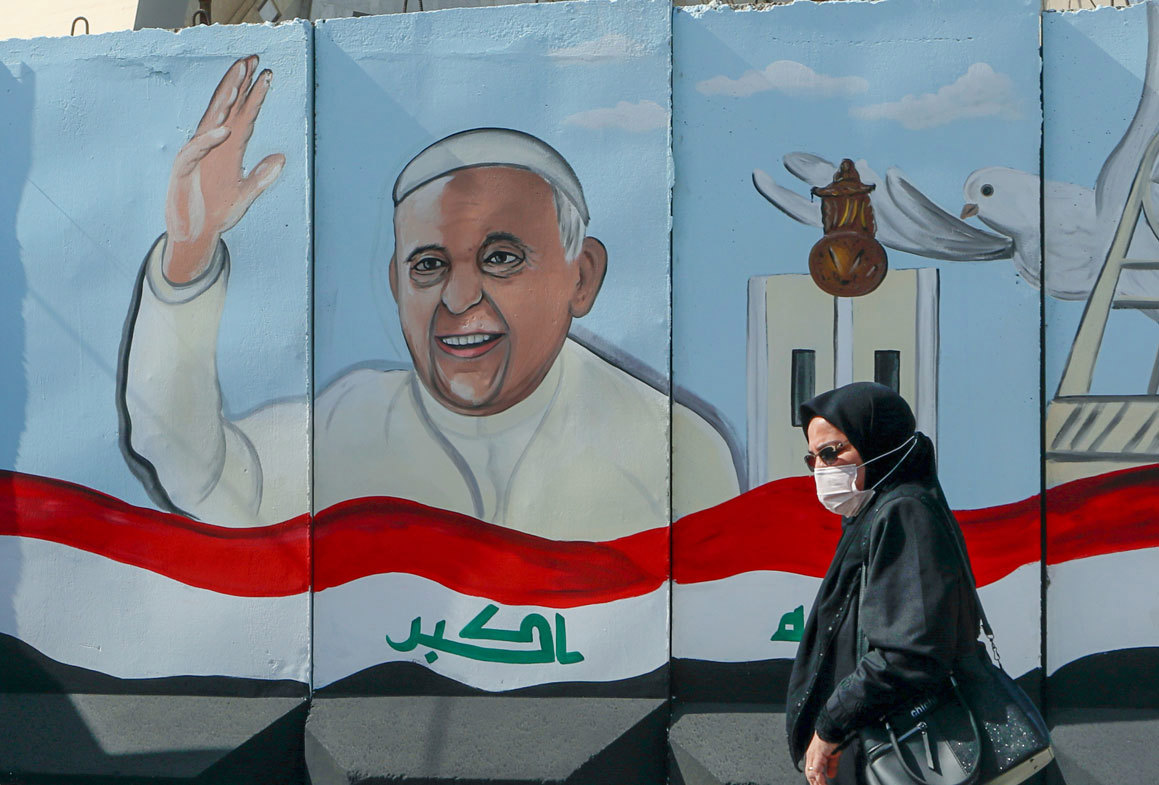 The Vatican and the pope have frequently insisted on the need to preserve Iraq's ancient Christian communities and create the security, economic and social conditions for those who have left to return. But that hasn't necessarily translated into reality.

"I am the only priest in Mosul. Every Sunday I hold mass at 9 a.m., and only around 70 people attend," said the Rev. Raed Adil Kelo, parish priest of the Church of the Annunciation in the onetime de-facto IS capital.

He doesn't expect more to return, but he said Francis' visit would have immeasurable importance for those who stayed.

"This visit will bring peace to Iraq" he said.