Police have surrounded a statue of Captain James Cook in a Sydney park as they continue to disperse protesters who gathered for a Black Lives Matter rally.

Police have surrounded a statue of Captain James Cook in a Sydney park as they continue to disperse protesters who gathered for a Black Lives Matter rally.

A few hundred protesters tuned up to the event to protest Aboriginal deaths in custody tonight, which was cancelled after authorities refused permission amid coronavirus rules on mass gatherings. 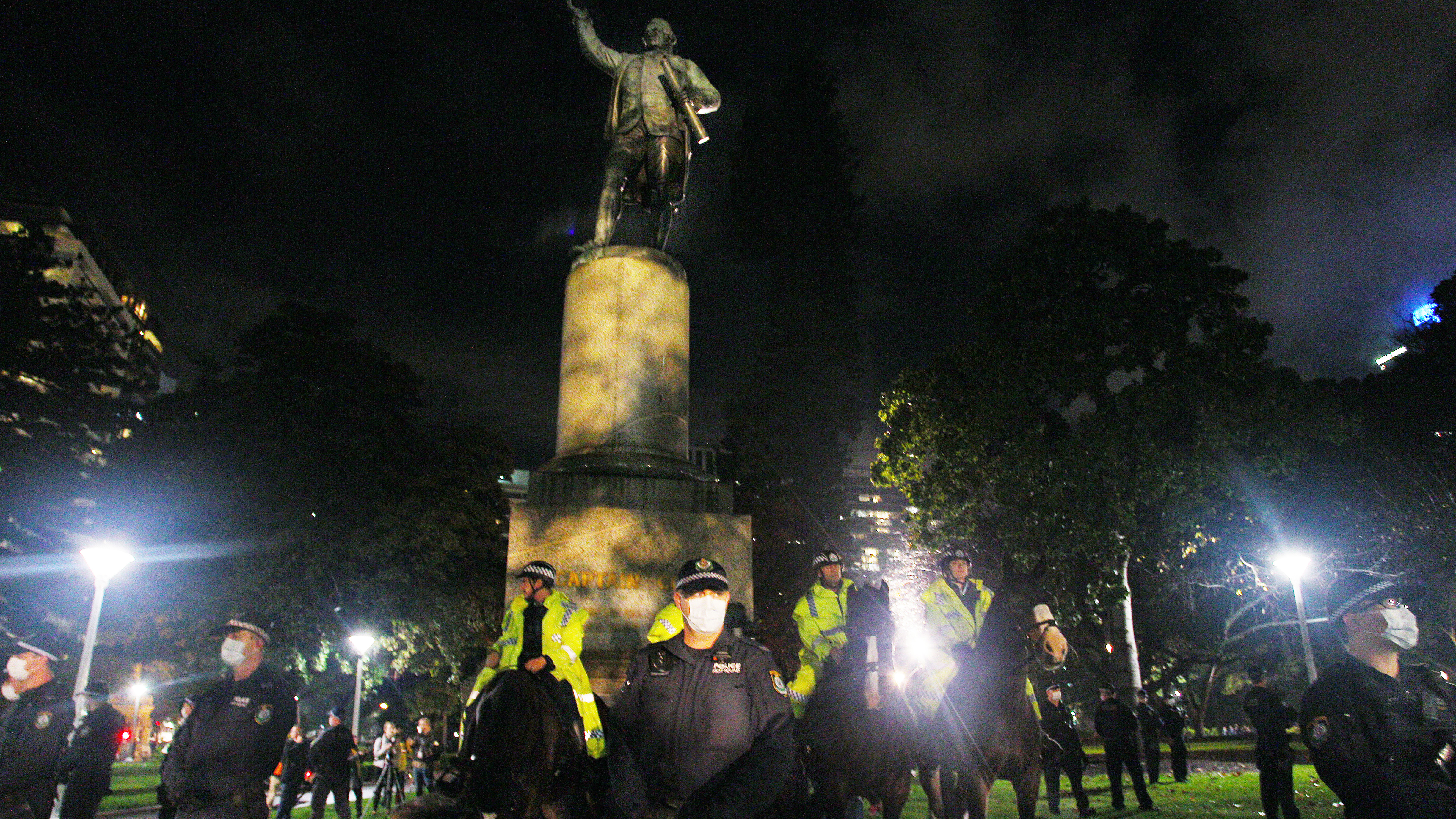 He said the crowd had been "quickly dispersed" into Central Station, after which they left the area.

A 24-year-old woman was arrested and issued with an infringement notice for breaching COVID-19 guidelines.

Mr Willing denied reports circulating on social media that police had used a "sound weapon" on crowds, saying it was an ordinary loud hailer used to issue a warning to the crowd.

He warned prospective protesters that police would be equally ready to respond to "unauthorised" public gatherings tomorrow. 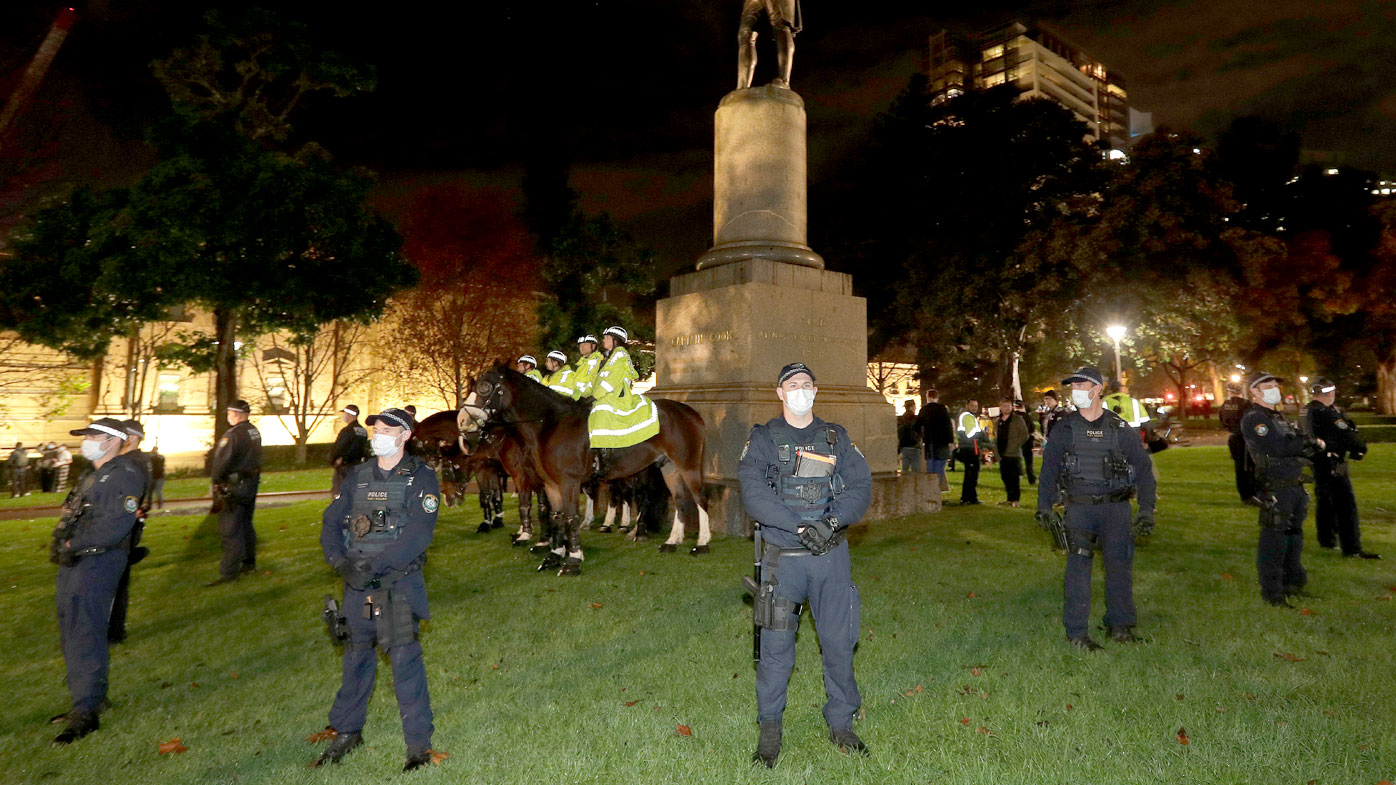 Officers outnumbered protesters as the group moved from Town Hall to Hyde Park.

Protesters chanted "Black lives matter" and "Not enough justice, too many coppers" while marching through the park. Police wearing face masks were trying to persuade people to leave via the train stations at Museum and St James.

A crowd at Town Hall later broke up when police issued a final warning.

Today, Prime Minister Scott Morrison and Chief Medical Officer Brendan Murphy told people not to attend the event, or any over the weekend amid coronavirus concerns. 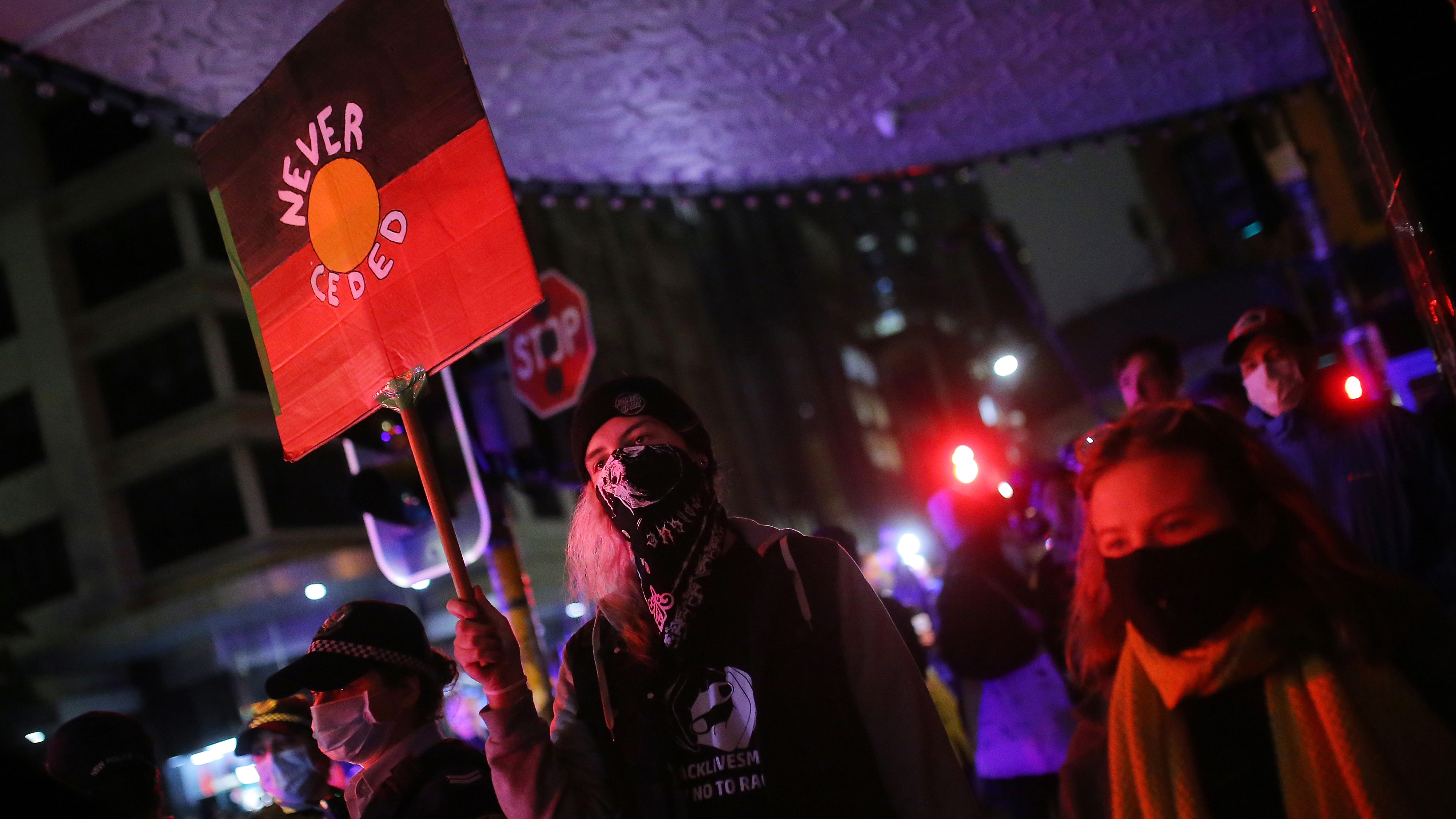 "The medical advice is that this is an unsafe thing to do. It puts not only your own health at risk, but it puts other people's lives at risk," Mr Morrison said. 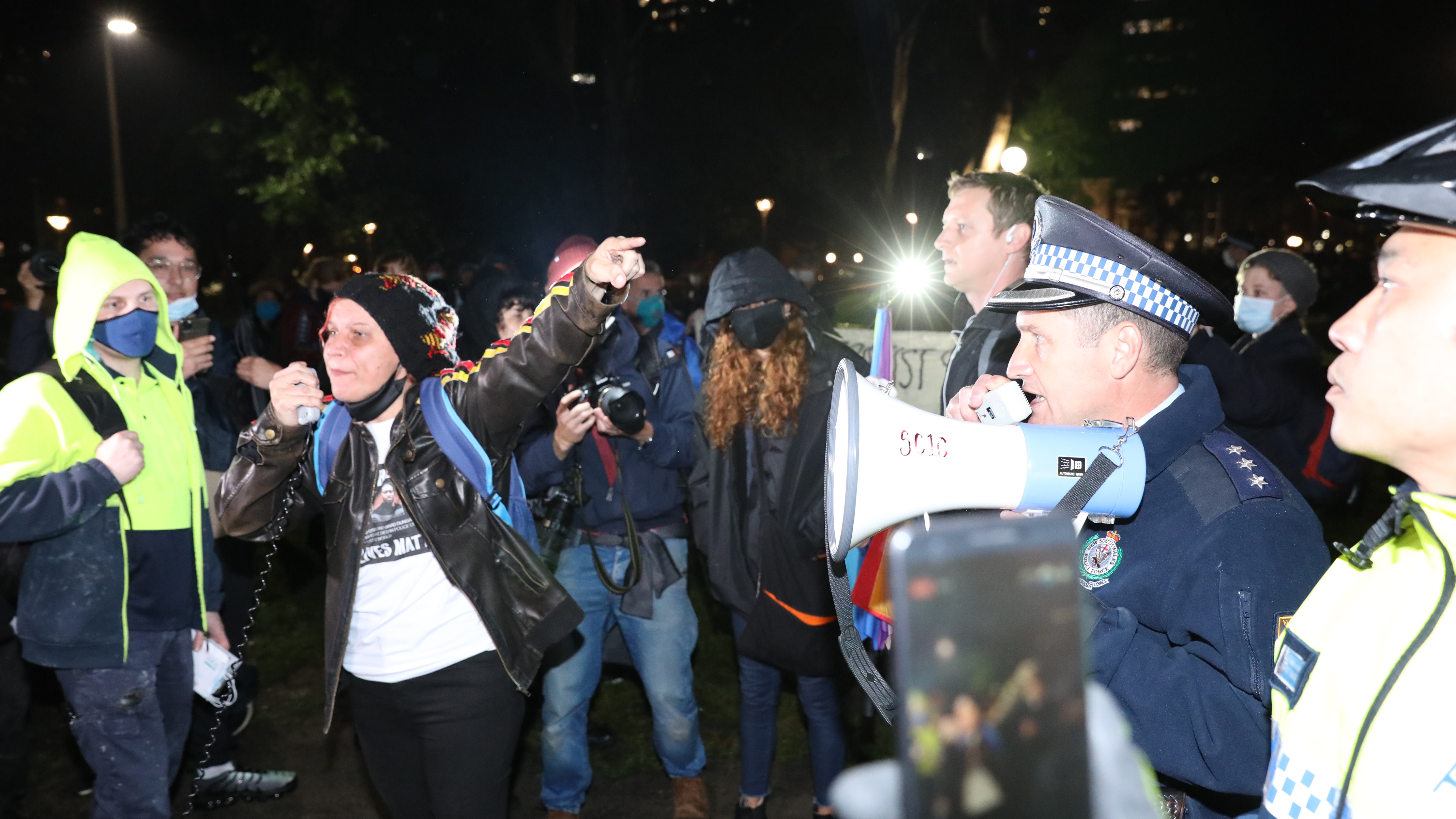 "I absolutely agree with the Prime Minister that those sort of events where you have a large number of people who don't know each other and who we can't contact-trace easily or track are one of the highest-risk events."

Last night the NSW Supreme Court ruled against a separate rally organised for Saturday by the Refugee Action Coalition (RAC).

Premier Gladys Berejiklian on Friday also asked people not to put the police in a difficult position. 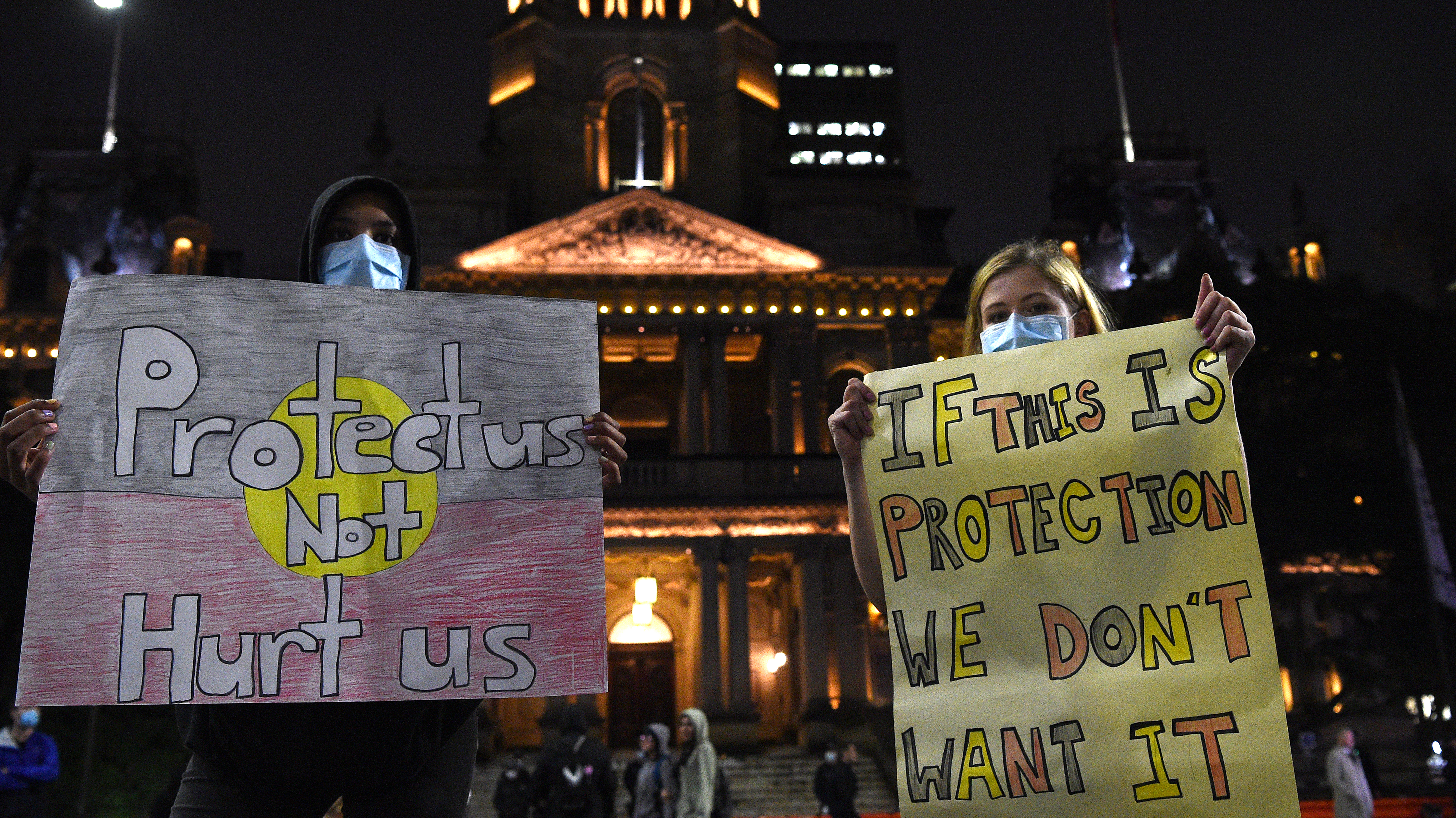 "These protests aren't legal, they're a public health risk. Please don't risk your own safety and don't risk getting a fine by being out there tonight or tomorrow.

"We just hope everything is resolved peacefully." NSW Police top brass have warned protest attendees can be moved on, potentially arrested or fined $1000.

Meanwhile, the state's two-week streak of no new locally-acquired COVID-19 appears over after Rose Bay Public School was closed on Friday while NSW Health investigated a possible case in a staff member.

NSW Police top brass have warned attendees can be moved on, potentially arrested or fined $1000.

Mr Morrison on Friday announced that under step three of Australia's COVID plan, small sporting stadiums would be able to seat 10,000 spectators or 25 per cent of the venue's capacity. 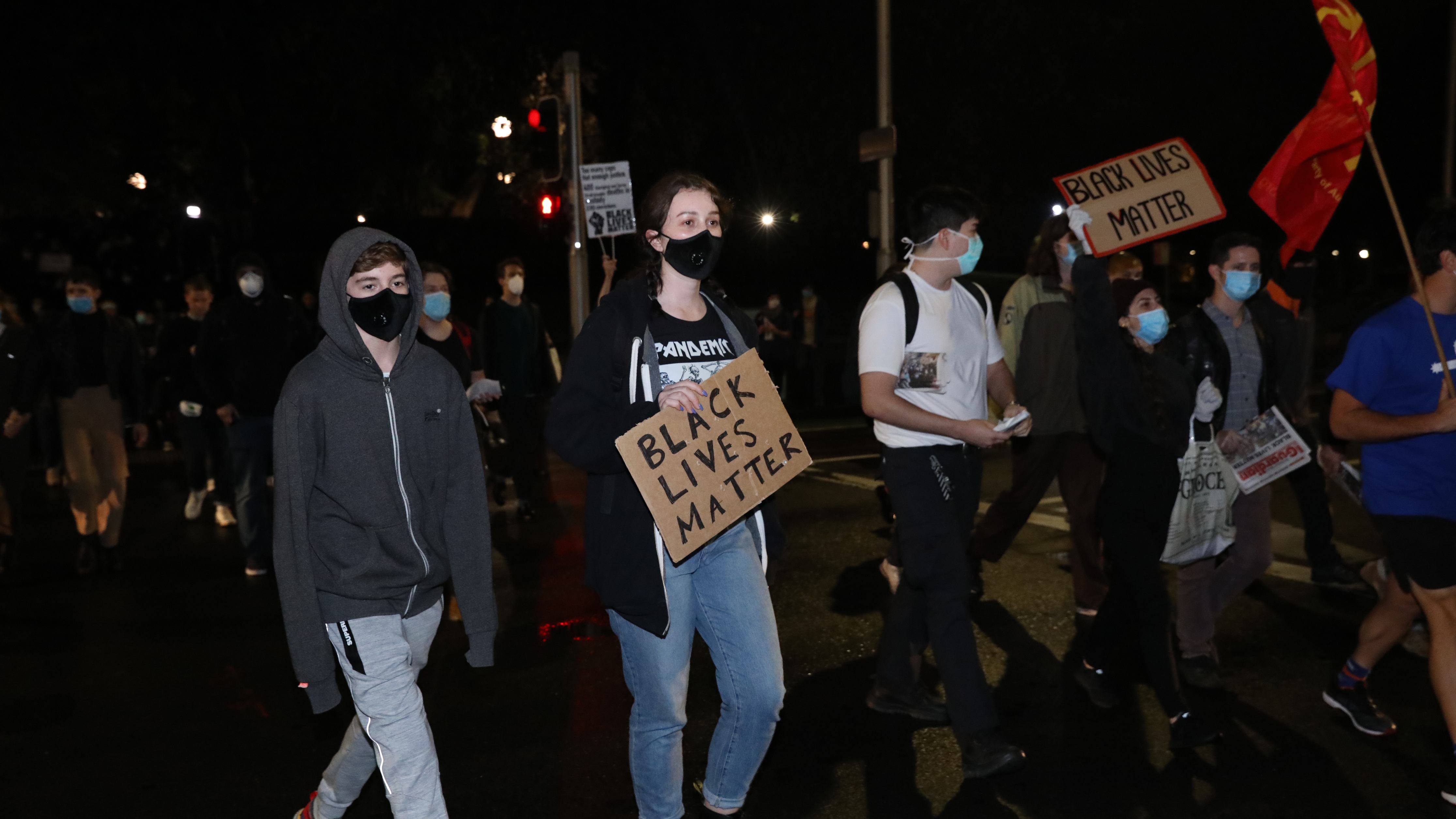 Individual states and territories will decide when to implement that change.

"(But) national cabinet reiterated that high-risk outdoor events without ticketed seating ... do not form part of step three," the prime minister said in a statement.

NSW Health says there have been 3115 cases to date. No one is currently in intensive care. NSW Education Minister Sarah Mitchell announced on Friday that school sports could resume from the start of Term 3 in late July.

It follows the announcement that community sport for both adults and children will recommence in NSW from July 1, with the state government on Friday committing $27 million to aid its resumption.

Up to 12,500 local sporting clubs will receive payments of up to $1000 while payments will also be made to 95 state sporting organisations.