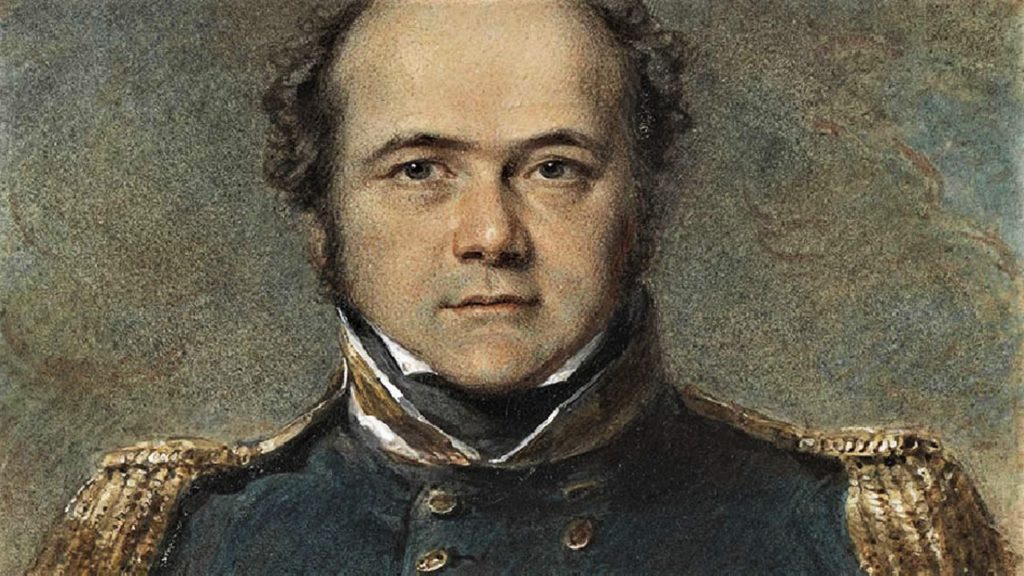 The poem below was first published in the Colonial Times on Tuesday, 11 July 1843.

In January 1842, Franklin suspended Montagu from his position. Montagu went to England and appealed his suspension. He was successful, and Franklin was censured and recalled in 1843.

Montagu stated that he had been suspended for disapproving Lady Franklin’s interference in the government’s business to Franklin. It was true that Franklin habitually discussed government business with his wife and welcomed her assistance, but there is no evidence that she improperly interfered.

Franklin returned to England and besought the British government to reconsider its judgement, but to no avail. It seemed likely that his career would end in dishonour.

Pity the sorrows of poor old Sir John!
Who floor’d (instead of Montagu) himself,
Who thinks it best the sooner he is gone,
As Stanley now has put him on the shelf.
A happy berth this Polar Hero got,
Of pay and perquisites a pretty store;
But bought and sold, alas! he’s gone to pot,
Which he complains of as a precious bore.
He found the people here all doing well,
Happy as Englishmen could ever be:
His politics have put them in the well,
The country smother’d in insolvency.
When first his footsteps press’d Tasmania’s land,
His councillors were faithful, firm, and true;
But then My Lady form’d an anti-band,
Which made affairs run riot and look blue.
The morning greeting, when the blue-rule clique
Had got the bit between the knightly jaws,
Was (but to tell it makes me really sick,)
Who is this day suspended? – hang the cause!
He found us rich – he leaves us poor indeed;
Asking for bread – for water: none he’ll give;
But leaves us Usury, which on us feed,
And, leaving, shares it, just to make him live.
A Doctor, unknown – nephews, (’tis the case –
From facts, alas! I am compell’d to quote,)
My Lady pushes into well-paid place –
(Unknown who scrawl’d the confidential note.)
Newspapers, too, were used to blind men’s eyes, sir,
And smother ev’ry poor man’s sigh and groan;
But now Sir John’s done – so’s Mister ‘Tiser,
And both exclaim “My occupation’s gone!”
My memory, alas! has been most frail.
My officers with me were e’er in doubt;
On them, by dire advice, did I turn tail,
And they turn’d tail too, so they’ve kick’d me out.
But off I go, and still I leave you all,
As tokens of my love, – it is a fact –
A monument, on which I’ll stand or fall –
The College Museum and the fam’d Road Act.
Probation Doctor, protegée unfit
For place, in which My Lady herself put him;
But soon Sir E. will shove him out of it – [him.
How folks will laugh, and, lud! how they will cut
The Confidential Trap on public purse
I needs must fix, (My Lady wills, you see;)
And he and I think that he might do worse,
Than sack the pay, and gammon as J. P.
My nevoys to the public I bequeath,
For each £500 a-year is not too much;
They should not take a berth with pay beneath,
Though they’re delighted public cash to touch.
No baronetcy nor a pension I
Can e’er expect to get for loss of place;
I fear that on me they’ll look rather shy,
And folks will fancy that I’m in disgrace.
Pity the sorrows of poor old Sir John!
And pr’ythee of him make but little fun;
And when from hence that worthy knight is gone,
Ask one another what the deuce he’s done?

Poet’s Corner is a quaint and quirky section of The Tasmanian Times. It has been designed to offer a haven to those who relish and immerse themselves in the sheer joy and pleasure emanating from English verse. Our idea is to share poems published in Tasmania during the early years of British arrival.