A theme park in China is facing international backlash for throwing a live pig off a bungee jumping platform for a marketing stunt.In disturbing footage documenting the incident, employees of Meixin Red Wine Town theme park can be seen carrying a truss…

A theme park in China is facing international backlash for throwing a live pig off a bungee jumping platform for a marketing stunt.

In disturbing footage documenting the incident, employees of Meixin Red Wine Town theme park can be seen carrying a trussed-up pig, reportedly weighing 160 pounds, up a metal stairway. When they reach the top, they dress the animal in a purple cape and attach it to bungee cords.

They then push the pig over the edge of the 220-foot platform. The animal can be heard squealing loudly as it plummets and jerks back up repeatedly. The audience reacts with screams, laughter and applause.

Subsequent clips show the pig lying partially conscious on the platform before being moved away by staff. 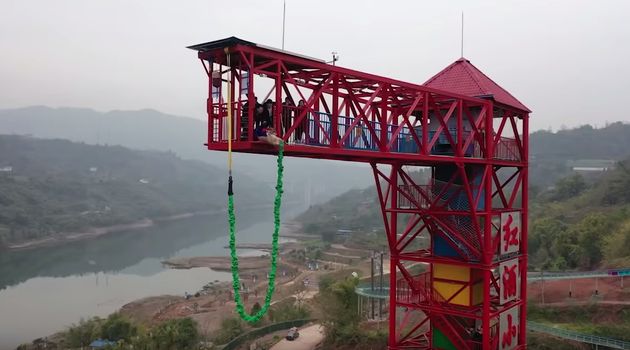 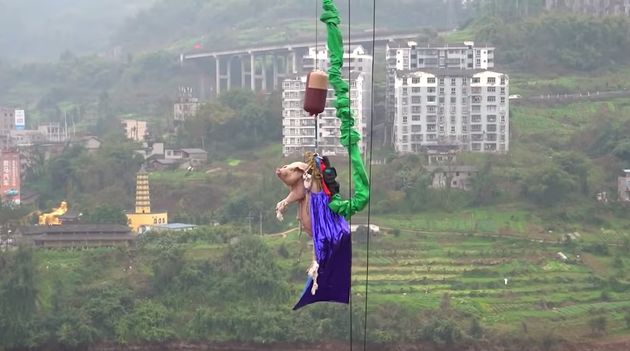 People on Chinese social media reacted to the footage with outrage, slamming the theme park operator for animal cruelty.

“It was miserable for the animal! It’s a disgusting marketing idea to attract attention by abusing a pig!” one user said on the Chinese social media platform Weibo, according to local news site Global Times.

“It’s not funny at all. It just shows what human beings can do when they get bored,” said another.

The park, located in the Chongqing region of southwestern China, has since apologized for the incident, reportedly telling a Beijing news station on Sunday that the “ill-conceived activity aimed to pray for pork prices to take a dive.” (Pork prices in China have soared in the last year due to an outbreak of African swine fever wiping out hundreds of millions of pigs.)

The park owner said the jump was staged to mark the end of the Year of the Pig, according to the South China Morning Post.

What happened to the animal after its ordeal is not known. However, several local reports indicate it was ultimately sent to a slaughterhouse.

Animal rights groups have condemned the act. People for the Ethical Treatment of Animals called the incident “cruelty to animals at its worst” in a statement from Jason Baker, PETA’s vice president of international campaigns. Baker urged China’s government to make legislative changes.

China currently does not have any federal laws prohibiting the mistreatment of animals. However, there’s been a growing movement for animal rights and welfare there in recent years.

“A bungee jump is a scary experience even for consenting humans — just imagine the outright terror of being forcibly strung up by your legs and thrown from a high platform,” Baker said.

“Pigs experience pain and fear, just as we do, and this kind of disgusting PR stunt should be illegal. The theme park deserves every shred of the backlash it’s receiving online, and the Chinese public’s angry response should be a wake-up call to China’s policymakers that they must implement animal protection laws immediately.”