People flocked to a reopened beach in Jacksonville, Florida, on Friday afternoon after officials partially lifted restrictions aimed at slowing the spread of the coronavirus.CNN correspondent Randi Kaye, who was reporting from the scene, described it a…

People flocked to a reopened beach in Jacksonville, Florida, on Friday afternoon after officials partially lifted restrictions aimed at slowing the spread of the coronavirus.

CNN correspondent Randi Kaye, who was reporting from the scene, described it as “a mad dash here for the ocean” on Friday’s broadcast of “Anderson Cooper 360.”

“Once police gave the all-clear, all the people who had been lined up in the streets waiting to get to the beach when they opened today at 5 p.m., they just flooded the area,” said Kaye.

“They were biking, they were running, they were swimming, surfing, they were fishing some of them, a lot of people brought their dogs,” she continued. “It was as if they had been cooped up for so long, for years. That’s how they were behaving when really it had only been about a month because they first closed this beach on March 20.”

Kaye said there “wasn’t a whole lot of” social distancing going on, with some groups set up on the sand with beach coolers and other people sunbathing.

A surfer interviewed by CNN said they would not be surprised if the easing of restrictions did not last very long, given the number of people who’d arrived.

Another beachgoer noted there were “so many people standing around, everyone’s so close together.”

Check out the segment here:

"It was a mad dash here for the ocean," says @randikayeCNN, from a reopened beach in Jacksonville, Florida.

But while coolers and surfboards were prevalent, social distancing methods were sadly less so.https://t.co/33b3i6Thiepic.twitter.com/Trw9LVm4yY

And photographs taken in Jacksonville on Friday afternoon here: 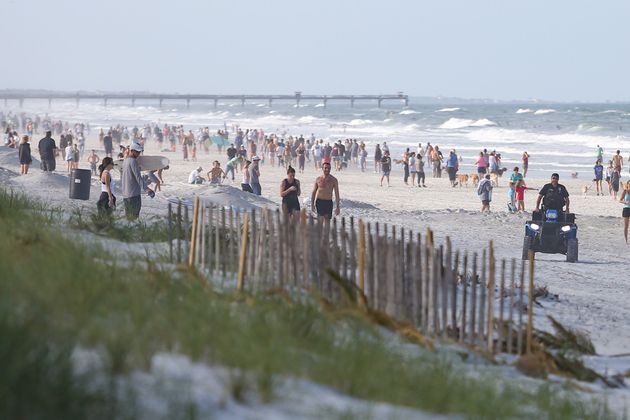 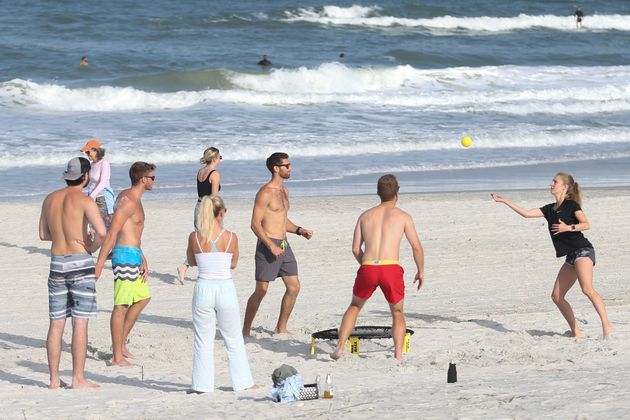 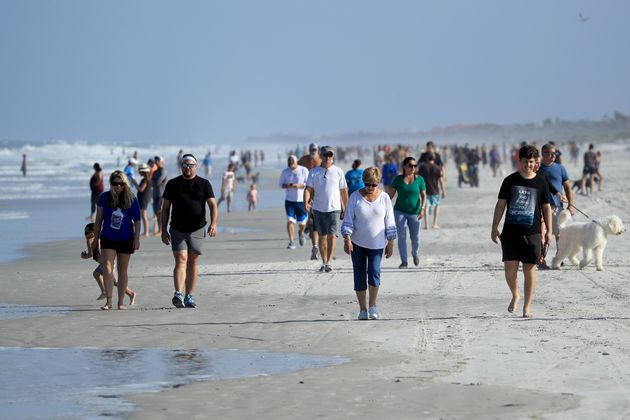 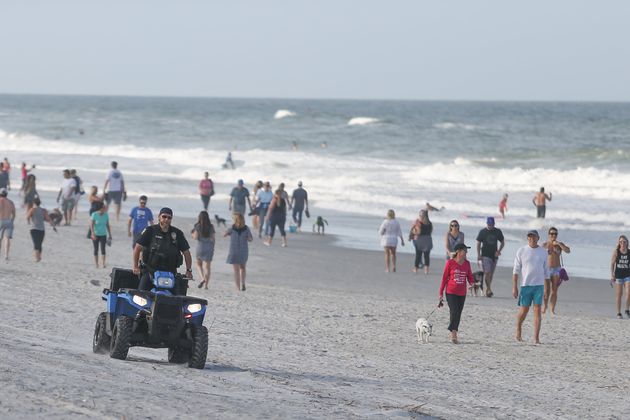 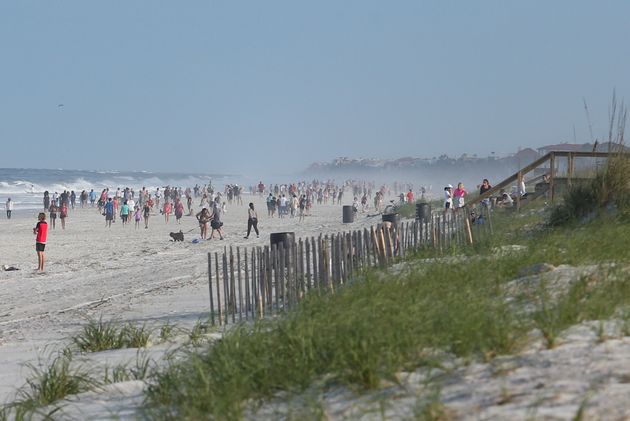 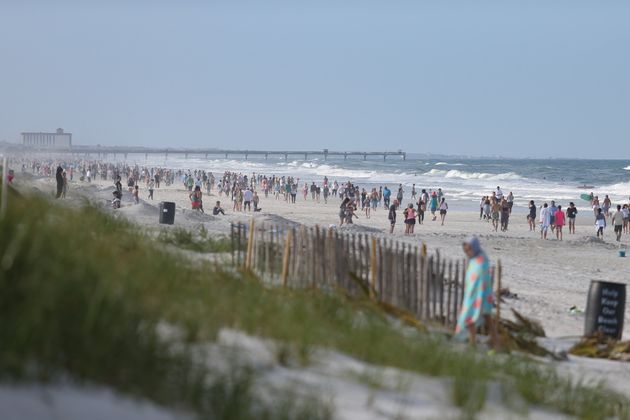 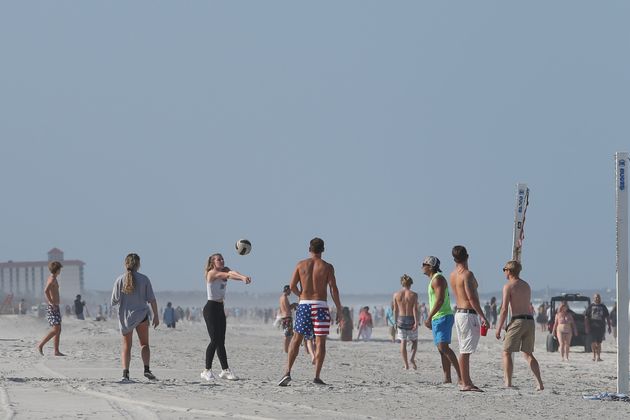 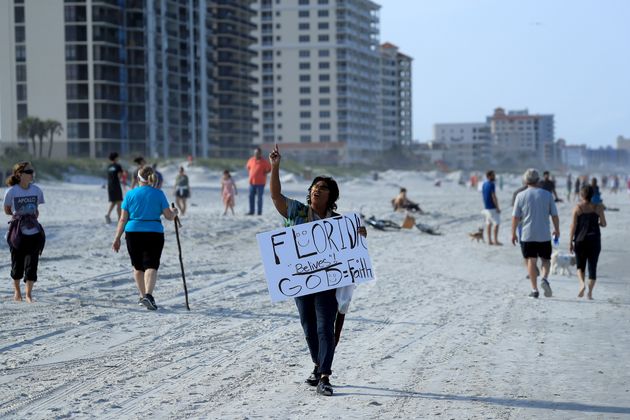 Florida Gov. Ron DeSantis (R), who has been widely criticized for his slow, haphazard and sloppy response to the public health crisis, this week said some municipalities could start reopening beaches and parks if social distancing measures were in place and it could be done safely.

Check out the clip here:

Beaches and parks in Duval County will reopen Friday, April 17 at 5 p.m. with certain restrictions. Beaches will only be open from 6am to 11am and 5pm to 8pm

Please watch the video for additional details and follow this link for the press release. https://t.co/TmkOmXhphSpic.twitter.com/206hiEbRyZ

Curry later tweeted this picture to thank residents for purportedly adhering to the rules, before sharing other tweets that showed more people on the sand.

Thank you Jacksonville. I appreciate your social distancing and responsible behavior as we opened our beaches for walking, swimming, running etc. No groups congregating. 5 pm to 8pm opening tonight. This is the 7pm shot from Councilman Diamond from the beach. Well done Jax https://t.co/VPVrhG40zC

I walked the Atl Beach TC area from 5-6 and I can tell you that these packed photos are deceptive. Ppl were staying well apart, all were moving/exercising, the police were patrolling diligently, and everyone was respectful. Our city did great!

There have been a few people trying to lay out on the beach, Jax Beach Police are educating them and they are packing up. Seems to be isolated to the area south of the pier. pic.twitter.com/inLE2jE5if

The is the busiest part of Jax Beach. Just south of the pier. pic.twitter.com/NLt4jDrjQl

All 3 Duval County beach mayors tell @ActionNewsJax they’ve had no incidents. They say people are following the rules & keeping a safe distance. We’re live at 6! pic.twitter.com/3VuiiFo0Zn

COVID-19, the disease caused by the coronavirus, has so far killed more than 150,000 people worldwide and upwards of 37,000 people in the U.S., which now has more confirmed cases than any other country.