"I am by no means a prude, but what happens when ads are put in places like a shopping centre is the choice is taken away from families as to whether or not their children are exposed to it and that is the concern," Ms Lalor said.

The petition was prompted by a video advertisement on display outside Honey Birdette stores which showed a woman tugging on a chain attached to a bondage collar around her neck.

Ms Lalor said after complaints were made to her local shopping centre at Broadway, the owners of the centre – Mirvac – passed on the concerns to Honey Birdette.

The latest video ad shows a woman provocatively running her hands over her stomach and pelvic region while wearing sheer white underwear.

"The woman's pelvic area is very visible underneath the underwear," she said. 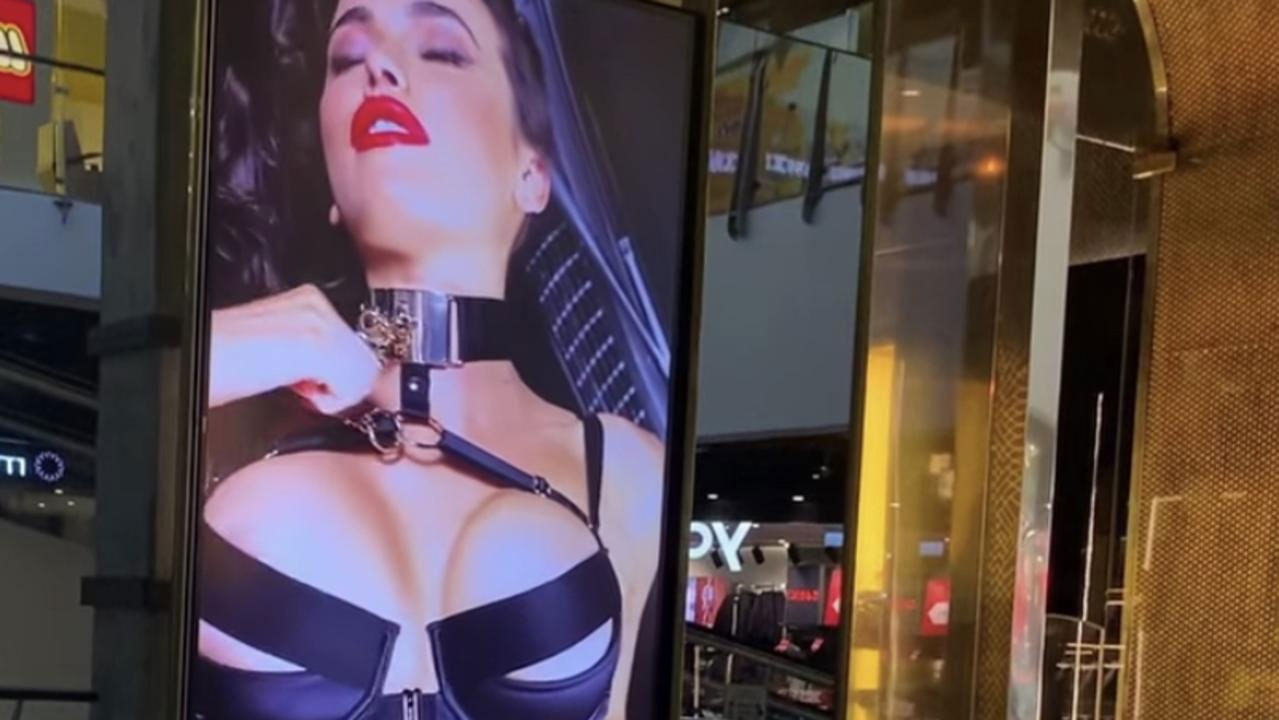 Furious parents took to Facebook to express their dismay at the new ad.

"The ad has been replaced. And it's worse," one mother wrote.

READ:  Some child abuse victims to miss out on redress

"Wow, now you can actually see her labia. How does that comply with advertising standards? Totally inappropriate to have this on display in a G rated environment," another wrote.

A spokesperson for Honey Birdette declined to comment on objections to the company's most recent ad, but told nine.com.au that the bondage ad was not taken down as a result of complaints.

"It was purely taken down because the campaign had come to an end," the spokesperson said.

A spokesperson for Australia's Ad Standards bureau confirmed to nine.com.au it had received complaints about both Honey Birdette ads.

A community panel would be investigating the bondage-style ad, while another panel would be looking into whether the most recent ad had breached the Australian Association of National Advertisers (AANA) code of ethics, the spokesperson said.

Ad Standards has investigated about 40 Honey Birdette marketing campaigns since the ad watchdog was launched in 1998 and upheld complaints in at least a dozen cases.

While some of the rulings resulted in Honey Birdette modifying or discontinuing the ad, in many cases the lingerie company failed to provide a response to the watchdog.

Ad Standards does not have the authority to fine companies which continue to run advertisements judged to have breached community standards or take legal action.

However, the Ad Standards spokesperson said a company risked damaging its reputation if it did so.

"Although Ad Standards does not issue fines or commence legal action, we work with all parties involved to achieve compliance in the overwhelming majority of cases," the spokesperson said.

Ms Lalor said it was frustrating that there was no regulatory body in Australia which had the power to punish advertisers who continually violated community standards.

READ:  When Will Australians Be Able To Travel Overseas Again?

"I think the primary concern is that there are no teeth to the regulatory bodies. We can see there has been a history of complaints about Honey Birdette ads from various corners of society," she said.

"There seems to be no recourse, so they will continue to do as they please."