A pod over over one hundred wild dolphins, including at least three juveniles, have been driven into nets in Japan’s notorious “Red Cove” over the weekend.

A pod over over one hundred wild dolphins, including at least three juveniles, have been filmed being driven into nets in Japan's notorious "Red Cove" over the weekend.

The animals selected for trade are destined to spend their lives in tanks in marine parks and aquariums around the world.

Several boats are seen herding the pod into shallower waters before the animals were netted, selected, and hauled onto boats LIA director Ren Yabuki was on the ground in the cove and witnessed the hunt firsthand.

He told 9new.com.au he felt helpless as he watched the pod get herded from open water into the narrow cove.

"Dolphins that were selected were thrashing in resistance," Mr Yabuki said.

"The dolphins were very stressed, and many of them slapped the surface of the water with their tail flukes.

"They were clicking and whistling at each other, communicating with each other and calling out to the parts of the pod that were separated by some of the nets night and day.

"It was very saddening to hear them crying out to each other.

"I've been working on the dolphin trade for a long time, but I had never heard them crying out like this. 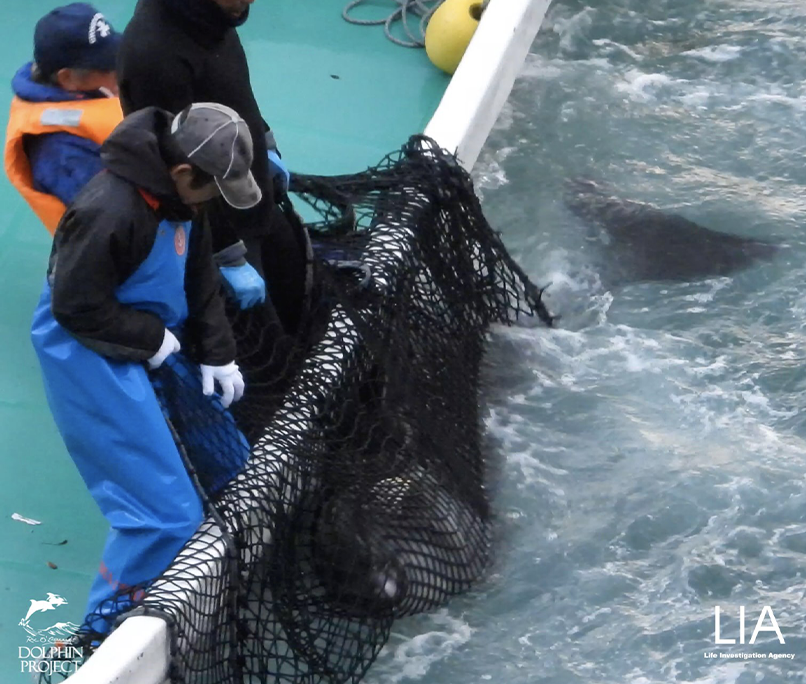 Mr Yabuki said he saw young dolphins, and "at least one baby" in the pod.

"Within the captures so far, they have taken several juvenile dolphins," he said.

"The captures are likely to continue yet, but so far it does not look like they have captured any baby dolphins."

In an update on their Facebook page, Dolphin Project, a not-for-profit working closely with LIA claimed 59 of the dolphins have been selected for the marine park and aquarium trade.

They claim one of the netted dolphins has died. 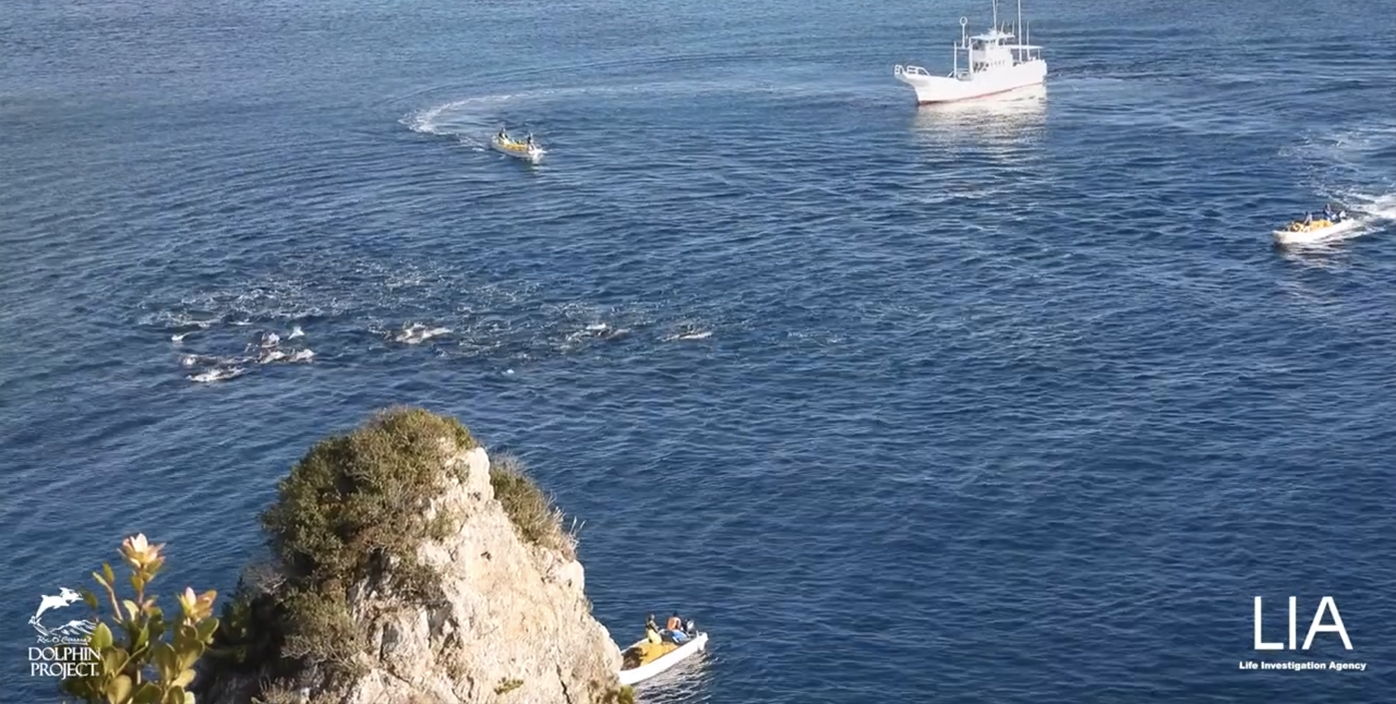 "It appears that one dolphin that was captured has died during the capture process," Mr Yabuki said.

"It may have been butchered for meat.

"There were many blood droplets on the road from the fishermen's union building, leading to one of the [dolphin meat] processing facilities." 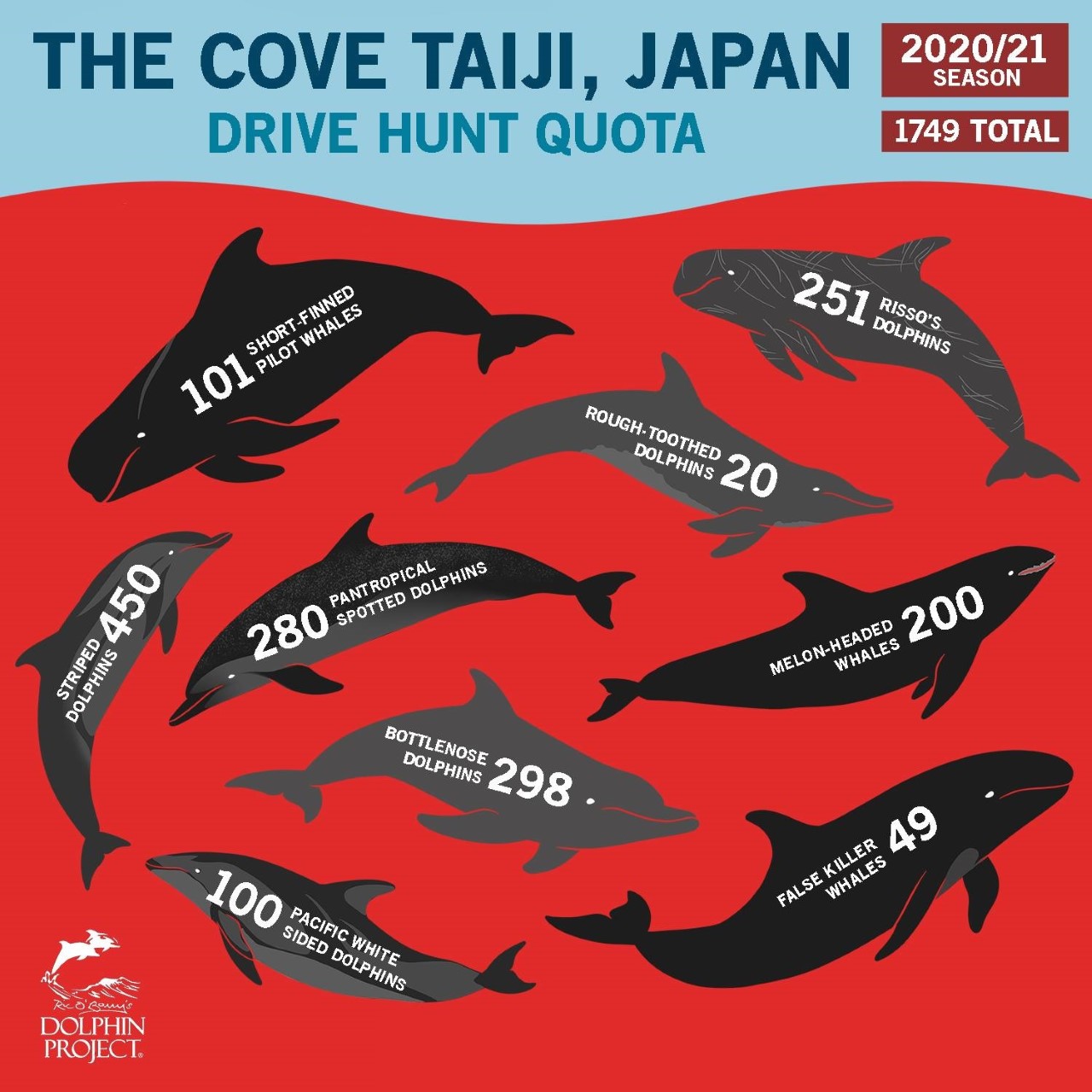 The Taiji dolphin hunts runs from September 1 to February 28.

Each year, the government sets quotas for how many of each species can be killed or caught.

9news.com.au has reached out to The Fisheries Agency of Japan's "Whaling Affairs Office" for a statement.

They are yet to respond.