A Greek Orthodox priest was shot on Saturday while he was closing his church in the French city of Lyon, and authorities locked down part of the city to hunt for the assailant, authorities said.

A Greek Orthodox priest was shot on Saturday while he was closing his church in the French city of Lyon, and authorities locked down part of the city to hunt for the assailant, authorities said.

The priest, a Greek citizen, is in a local hospital with life-threatening injuries after being shot twice in the abdomen, a police official told The Associated Press. The attacker was alone and fired from a hunting rifle, said the official, who was not authorised to be publicly named.

Police cordoned off the largely residential neighbourhood around the church and warned the public on social networks to stay away. As night fell on Lyon, an Associated Press reporter saw police tape and emergency vehicles throughout the neighbourhood. National police tweeted that "a serious public security incident" was under way.

The reason for the shooting was unclear. It happened two days after an Islamic extremist knife attack at a Catholic church in the French city of Nice that killed three people, and amid ongoing geopolitical tensions caricatures mocking the Muslim Prophet Muhammad published in satirical French newspaper Charlie Hebdo.

Read more: Tens of thousands of Muslims across the world protest Macron's stance on French cartoons

French anti-terrorist authorities were following the case but not investigating Saturday's shooting. The interior minister activated a special emergency team to monitor the manhunt, and the Lyon prosecutor opened an investigation for attempted murder.

"No theory is favoured, no theory is ruled out," Lyon Mayor Gregory Doucet told reporters at the scene. "We don't know at this stage the motive for this attack."

Antoine Callot, the pastor at another Greek Orthodox church in Lyon, identified the wounded priest as Nikolas Kakavelakis, a 45-year-old father of two. Callot told The Associated Press that the Greek Orthodox community in Lyon has not received any threats, but said he immediately asked police for security protection at his church after the shooting.

"We are anxious and anguished. It's really horrible," he said. "Now we need to hide and be careful." 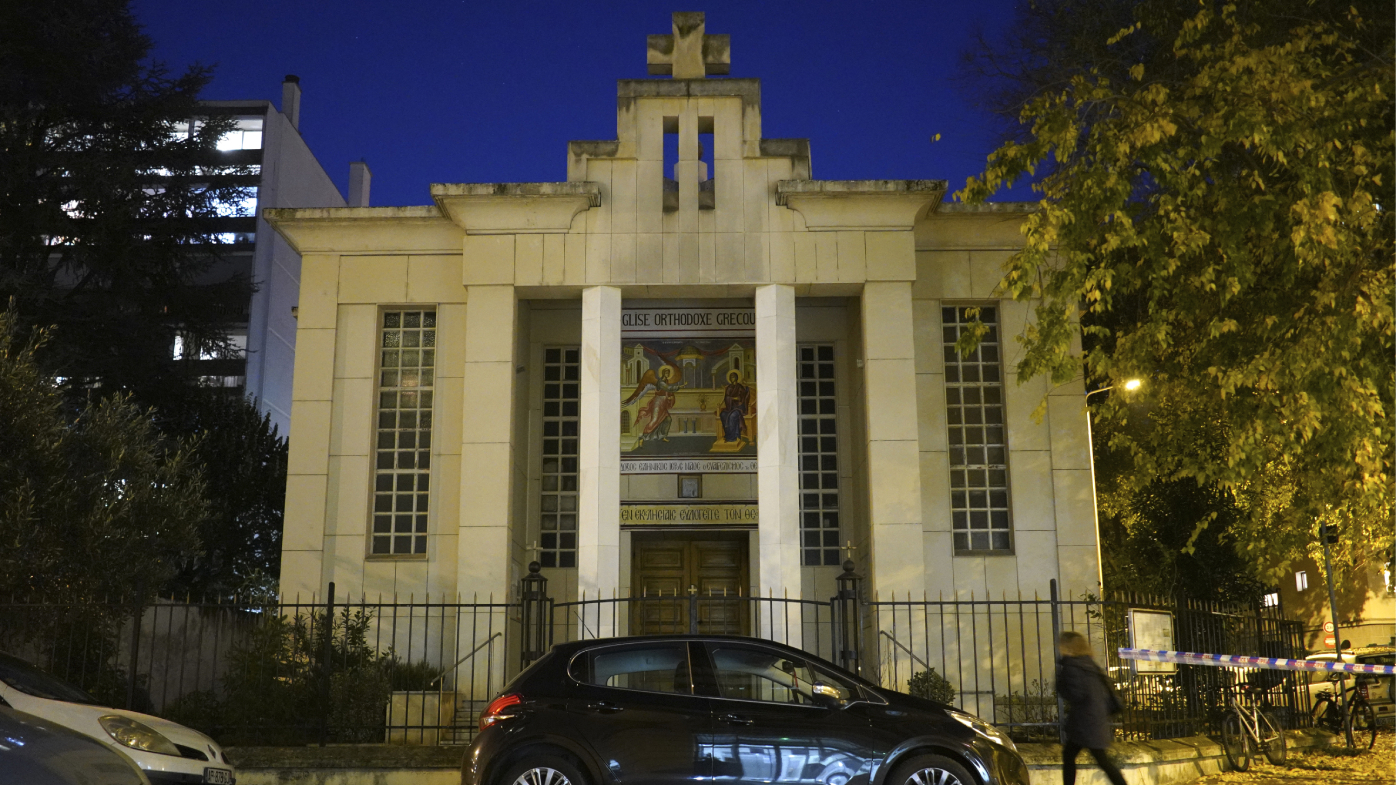 Residents and a local police patrol heard shots near the church, and when officers arrived they saw an individual running away and found the wounded priest by the back door of the church, the Lyon prosecutor said in a statement.

Prime Minister Jean Castex reiterated government promises to deploy military forces at religious sites and schools. He said French people can "count on the nation to allow them to practice their religion in full safety and freedom."

The government has been promising extra security at churches, mosques and other religious sites for several days now, but AP reporters have seen little visible sign of an increased police or military presence. No one was guarding the church targeted Saturday in Lyon, or the church attacked in Nice on Thursday.

Seeking to calm tensions and to explain France's defence of the prophet cartoons, President Emmanuel Macron gave an interview broadcast Saturday on Arabic network Al-Jazeera. Macron also tweeted that "our country has no problem with any religion. They are all practiced here freely! No stigmatisation: France is committed to peace and living together in harmony."