Older voters love Joe Biden, but lately, they’re having doubts about his ability to take on President Donald Trump in November.“It’s so sad. I really feel sad,” Laura Norris, 62, said as she watched the former vice president spe…

Older voters love Joe Biden, but lately, they’re having doubts about his ability to take on President Donald Trump in November.

“It’s so sad. I really feel sad,” Laura Norris, 62, said as she watched the former vice president speak at a town hall here on the eve of the New Hampshire primary.

“You have to be brutal to take Trump on. I think that his time has passed. I wanted him to be good, but I feel sad,” added Norris, who works at a local quarry.

Biden’s edge with older voters has been his greatest asset so far in the race for the Democratic presidential nomination. But with the New Hampshire primary only days away, in a state where he already faces an uphill climb, elderly voters are reconsidering their support for the septuagenarian in favor of some younger blood: namely Pete Buttigieg, the 38-year-old former mayor of South Bend, Indiana, who drew huge crowds up and down the state this weekend.

“I do think everything is changing in the world, and I think having a younger person has some advantages over being older,” said Dick Ellison, 68, an infectious disease specialist from Massachusetts who showed up to see Buttigieg in Nashua on Sunday. “I really like what Biden did in the past, but I think his energy is a limitation.”

Biden and Buttigieg held campaign events within a one-mile vicinity on Sunday, but like the two men themselves, they couldn’t have been more different. Eighteen hundred people showed up to a middle school to see Buttigieg, many of them waving signs and chanting his name while he spoke about “turning the page” and bringing the country together to take on Trump. The crowd’s energy was raucous and reflective of Buttigieg’s growing momentum in the state. 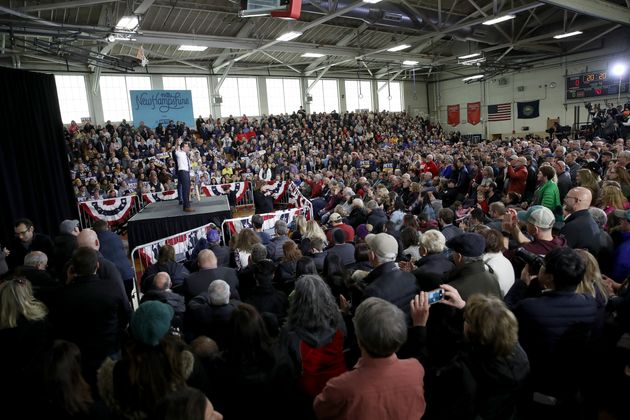 Biden’s event, by contrast, was a very solemn affair. His first applause line didn’t come until 15 minutes into his 1½-hour speech, when he talked about restoring the character of the country, beginning with the occupant in the Oval Office. The audience of roughly 600 stood quietly while Biden spoke of his massive personal losses. Some of the attendees prefaced their questions by first offering their condolences to him and his wife, Jill.

“Like many of you, I’ve lost a lot in my lifetime,” Biden said at one point. “Lost a wife and a daughter in a car accident. Lost my son to cancer. But I’ll be damned if I’m going to stand by and lose my country. It will not happen.”

The line brought the crowd to its feet for the first time of the night. But it also seemed like an acknowledgment that, as much as he and his campaign sought to downplay the effect of the New Hampshire primary, he was facing an uphill climb — especially after his poor performance in the Iowa caucuses.

Biden’s campaign suggests that he ought to do better in the more diverse Nevada and South Carolina primaries, particularly due to his strength with African American voters.

“We’re surrounded by two states whose two senators are running,” said Gene Faltus, 67, a precinct captain for Biden in Keene, New Hampshire. “Joe himself admitted he expects not to win in New Hampshire. South Carolina is going to be a big, big win for him. And southern states on Super Tuesday.”

Other Biden supporters maintained that concerns about his ability to take on Trump were overblown and that he could go toe-to-toe with him as best as anyone else in the race.

“I’ve been to Africa and I’ve seen lions. His roar may not be as loud as it used to be, but he’s still a good, healthy lion,” Richard Laplant, a postal worker from Manchester, said Sunday at the former vice president’s event in Hudson. 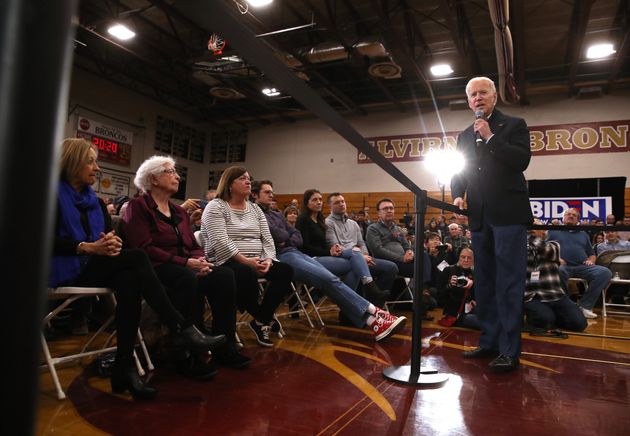 Still, Biden’s performance in Friday night’s debate made other older voters second guess his capacity to go the distance.

Rick Gehrich, 64, a retiree from Jaffrey who showed up to a Buttigieg event in Keene on Saturday, said he was still deciding whether to support Buttigieg or Biden.

“Basically, it’s going to be who I think can beat Donald Trump more than their views on the economy and those kinds of things,” Gehrich said. “I’m afraid he [Biden] is starting to look a little old, a little weak. Maybe he can’t beat Trump.”

Mark Stevens, 69, an undecided voter who also showed up to Buttigieg’s town hall in Keene on Saturday, said he was worried about Trump’s efforts to tar the Bidens over his son Hunter’s involvement in Ukraine, even if he didn’t believe they had truth to them. The Massachusetts native, who works as a book editor, compared the situation to the 2004 Swift boat attacks against then-Democratic presidential candidate John Kerry.

“It seems to me so laughable, I can’t even take it seriously,” Stevens said. “On the other hand, back in 2004 when John Kerry was running and they came up with that Swift boat thing, and I said that’s going to last for 24 hours, but boy it killed him. It killed him. It was absurd and outrageous, but it killed him.”

It’s clear that Biden’s campaign has felt threatened by Buttigieg’s growing momentum in the race. On Saturday, they put out an ad mocking the fact that Buttigieg’s only experience in public office is being the mayor of a city with just over 100,000 residents.

“The Vice President’s decision to run this ad speaks more to where he currently stands in this race than it does about Pete’s perspective as a mayor and veteran,” Chris Meagher, a spokesperson for Buttigieg, responded in a statement.

But Larry Phillips, a retired psychologist from Keene, isn’t buying the inexperience argument against Buttigieg.

“How about all the experience Trump had? None. Zero. Less than zero,” Phillips said. “It would be nice if [Buttigieg] had broader political experience, that’s true. I just think he’s smart enough and measured enough that he could handle it.”