Civil defence forces carrying rifles and health workers wearing gas masks and red hazmat suits paraded in North Korea's capital in a celebration of the nation's 73rd anniversary that was a marked departure from past militaristic displays.

The parade late Wednesday — overseen by leader Kim Jong Un, wearing a cream suit and visibly slimmer than at the start of the year — centred around paramilitary organisations and public security forces protecting the capital, Pyongyang, instead of the military units that handle the most important weapons in Kim's nuclear and missile arsenal.

In January and last October, North Korea rolled out its most provocative strategic weapons, threatening Asian rivals and the American homeland, but there was no immediate indication the latest parade showcased ballistic weapons. 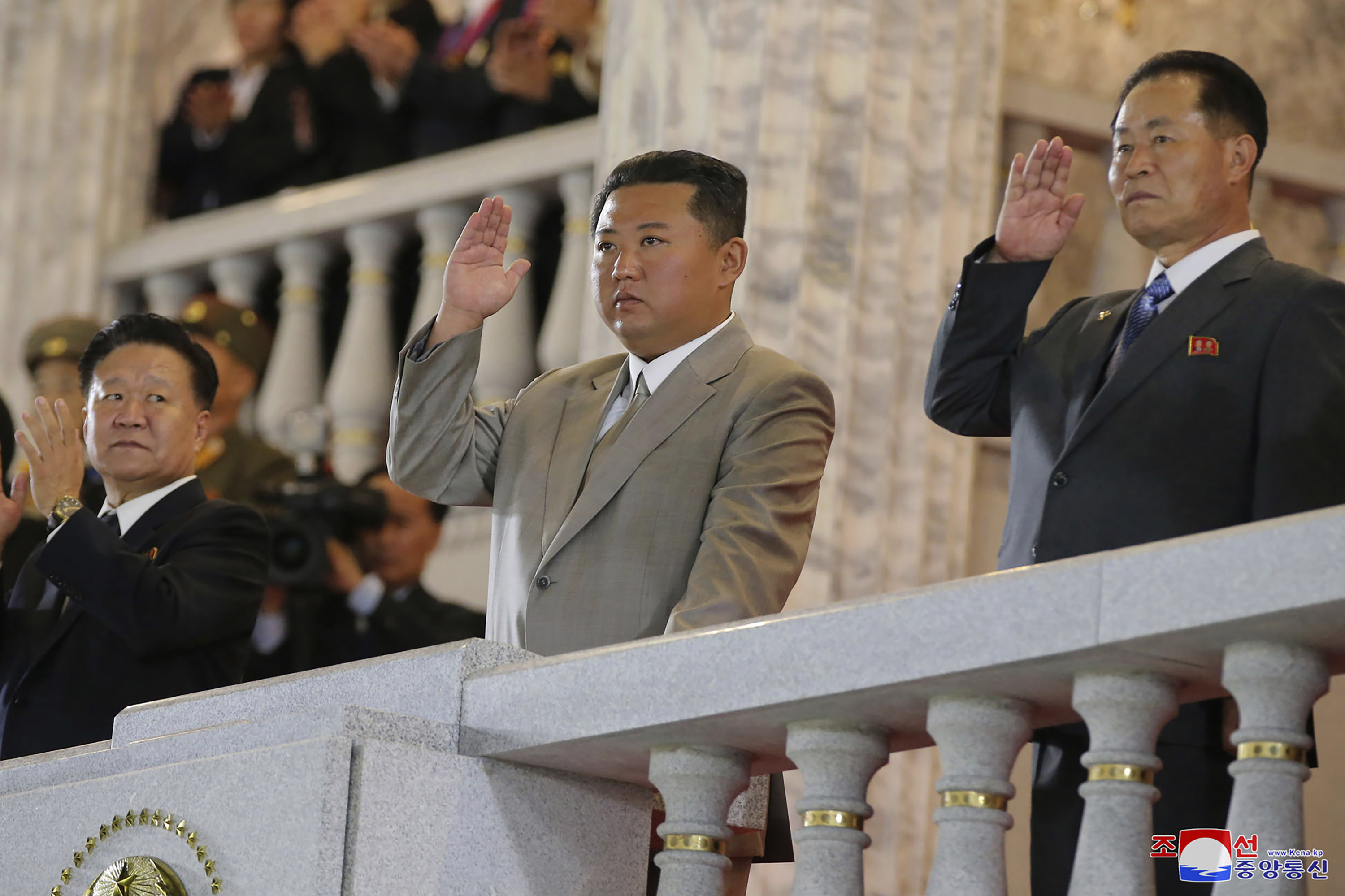 Thursday's state media coverage of the event that began late Wednesday indicated its message was aimed at a domestic audience.

Experts say the toned-down event reflected the harsh challenges facing North Korea as its broken, mismanaged economy is further strained by continuing US-led sanctions, prolonged border closures because of the pandemic, and flooding that caused food shortages in recent years.

North Korean state television, which broadcast a recording of the event on Thursday evening, showed the performers and tens of thousands of spectators roaring as Kim appeared as the clock struck midnight. 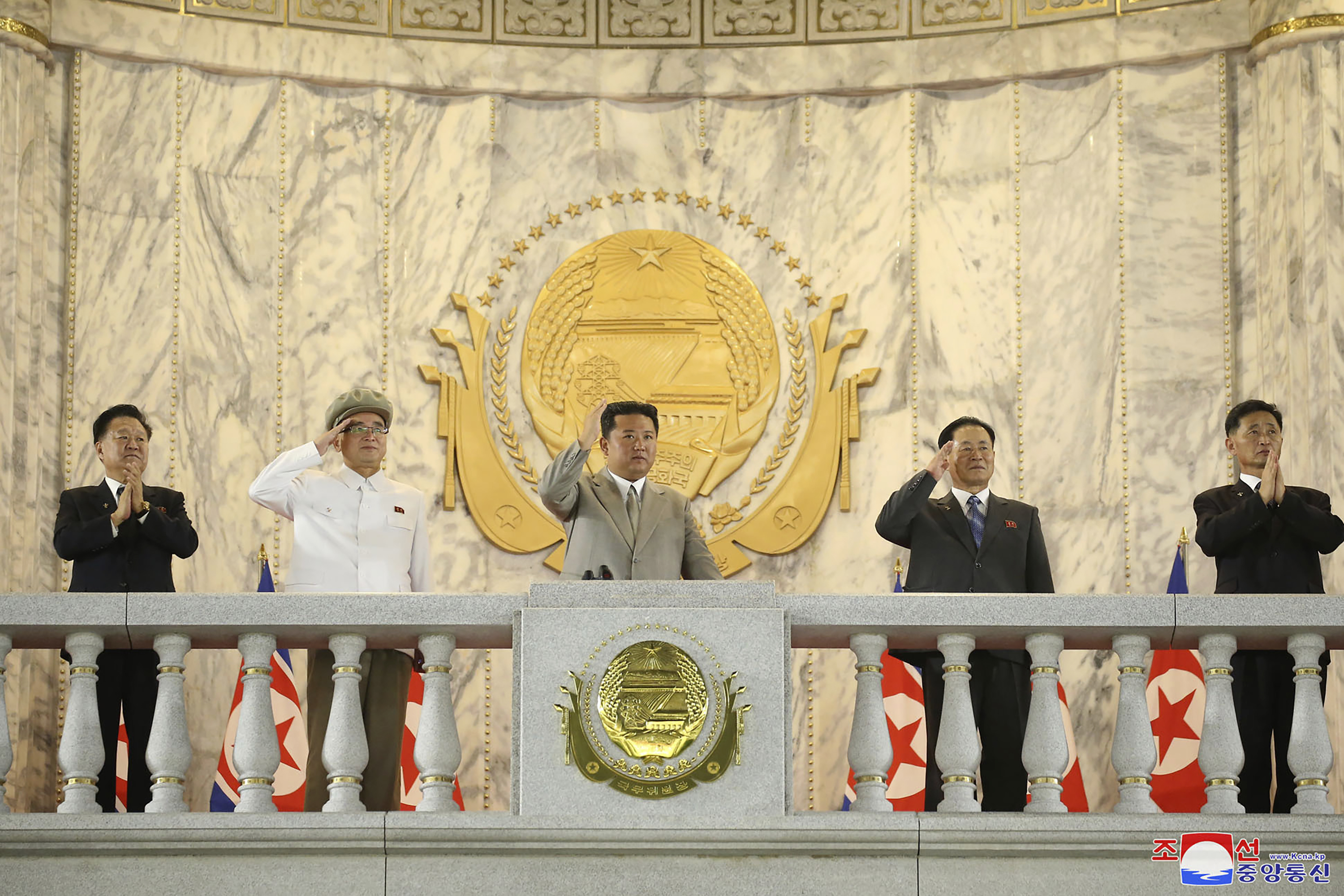 Kim, flanked by senior officials and smiling widely, kissed the children who presented him with flowers and waved to the crowd before taking his spot at a balcony overlooking the brightly lit Kim Il Sung Square, named after his grandfather who founded the nation in 1948.

Paratroopers carrying North Korean flags jumped from planes, while fighter jets flew in formation, firing what appeared to be flares across the night sky. There also were fireworks and illuminated drones that formed the North Korean flag.

Kim apparently did not deliver a speech during the event. 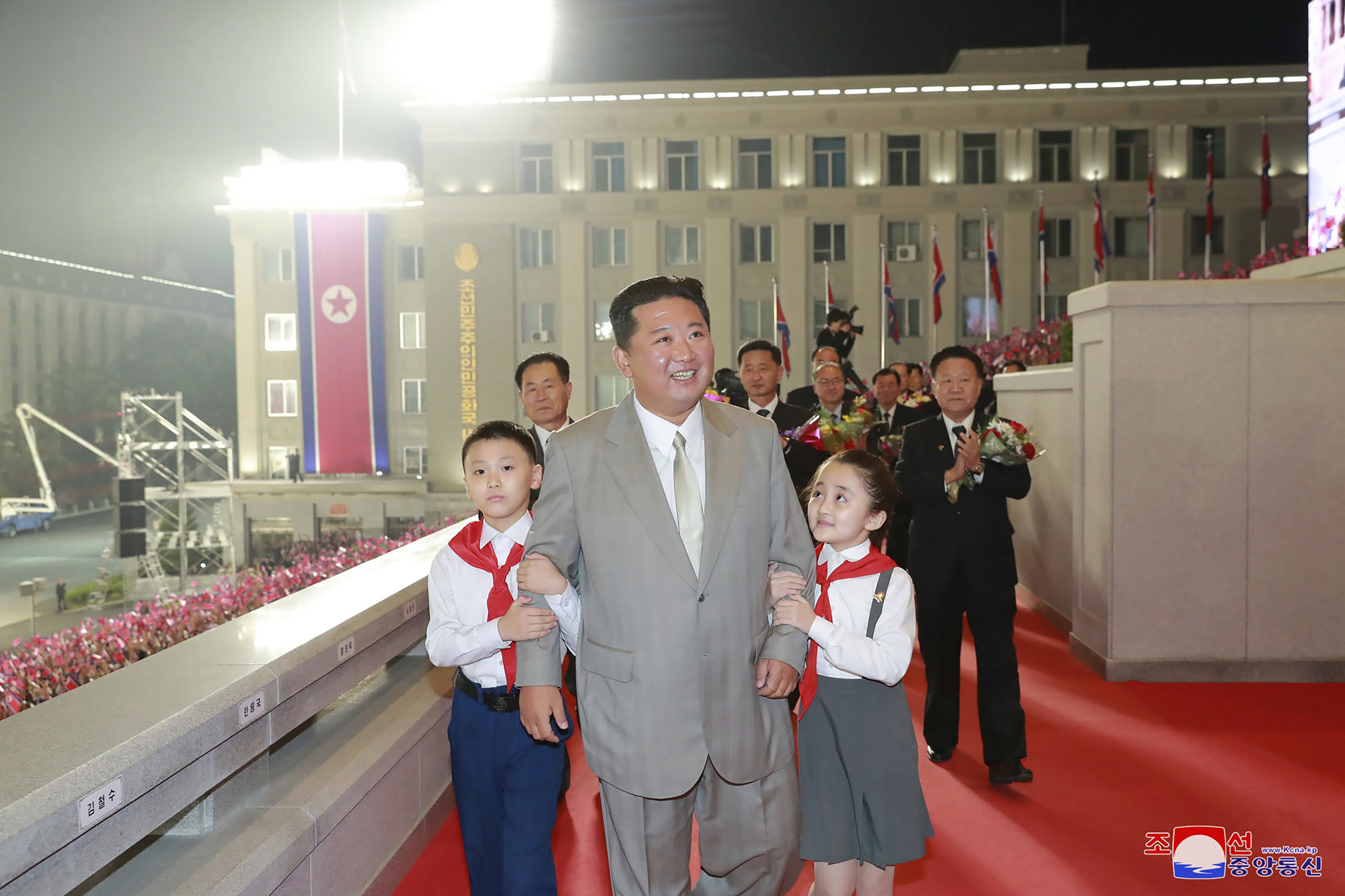 There had been expectations that North Korea would show off missiles and other important weapons to pressure the Biden administration amid a diplomatic freeze with the US after Kim failed to leverage his arsenal for economic benefits during the Trump years.

But the parade shows that North Korea is too preoccupied with its domestic problems to attempt to deliver provocative messages overseas, said Hong Min, an analyst at South Korea's Institute for National Unification.

"The parade shows that the government felt a need to build unity domestically — the population is clearly suffering amid the pandemic and social complaints are likely building up," said Hong. 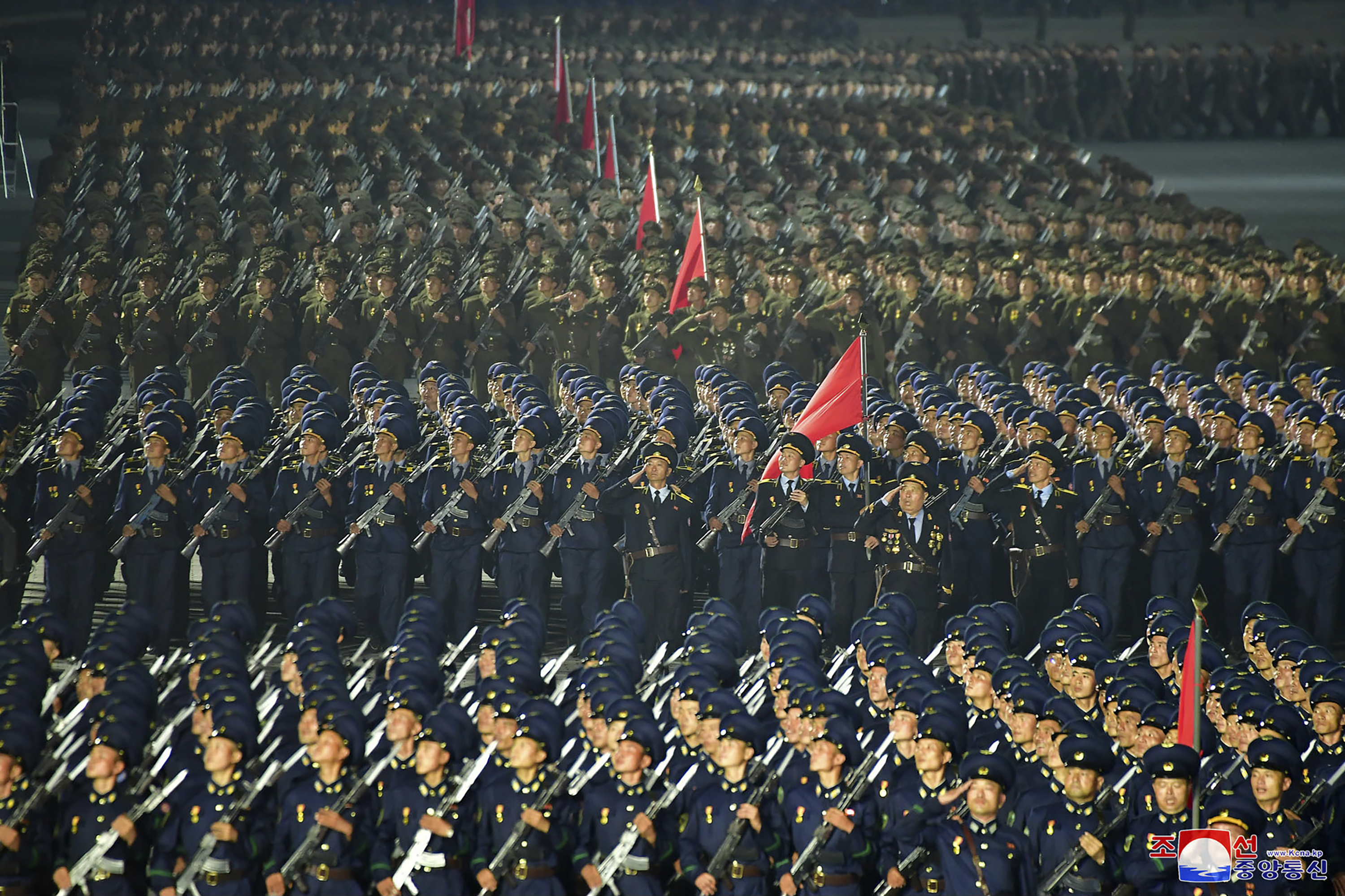 He said it was highly unusual for North Korea to showcase its civil defence units in a parade.

"North Korea needs to enforce military-like discipline while mobilising its civilians in campaigns to rebuild the economy and areas damaged by floods. There aren't many ways for the leadership to encourage and motivate them, other then showcasing them on televised parades," he said.

Hong said it would be problematic for North Korea to flaunt provocative weapons and create diplomatic friction when it will need to rely on the outside world for coronavirus vaccines.

Choi Young-sam, spokesman of South Korea's Foreign Ministry, said the US and South Korean militaries were closely monitoring North Korea over the parade but declined to give Seoul's assessment of the North's intent. 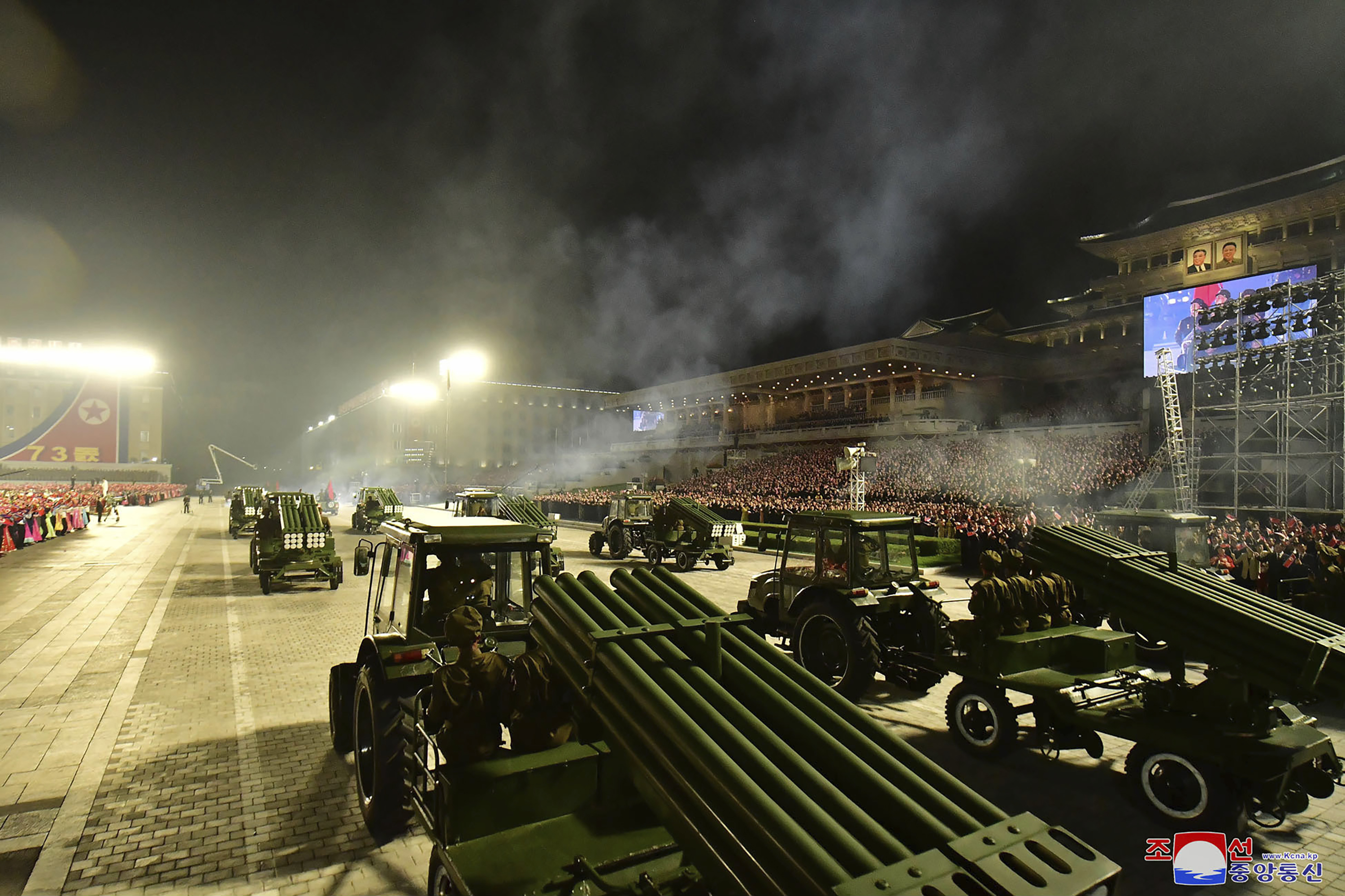 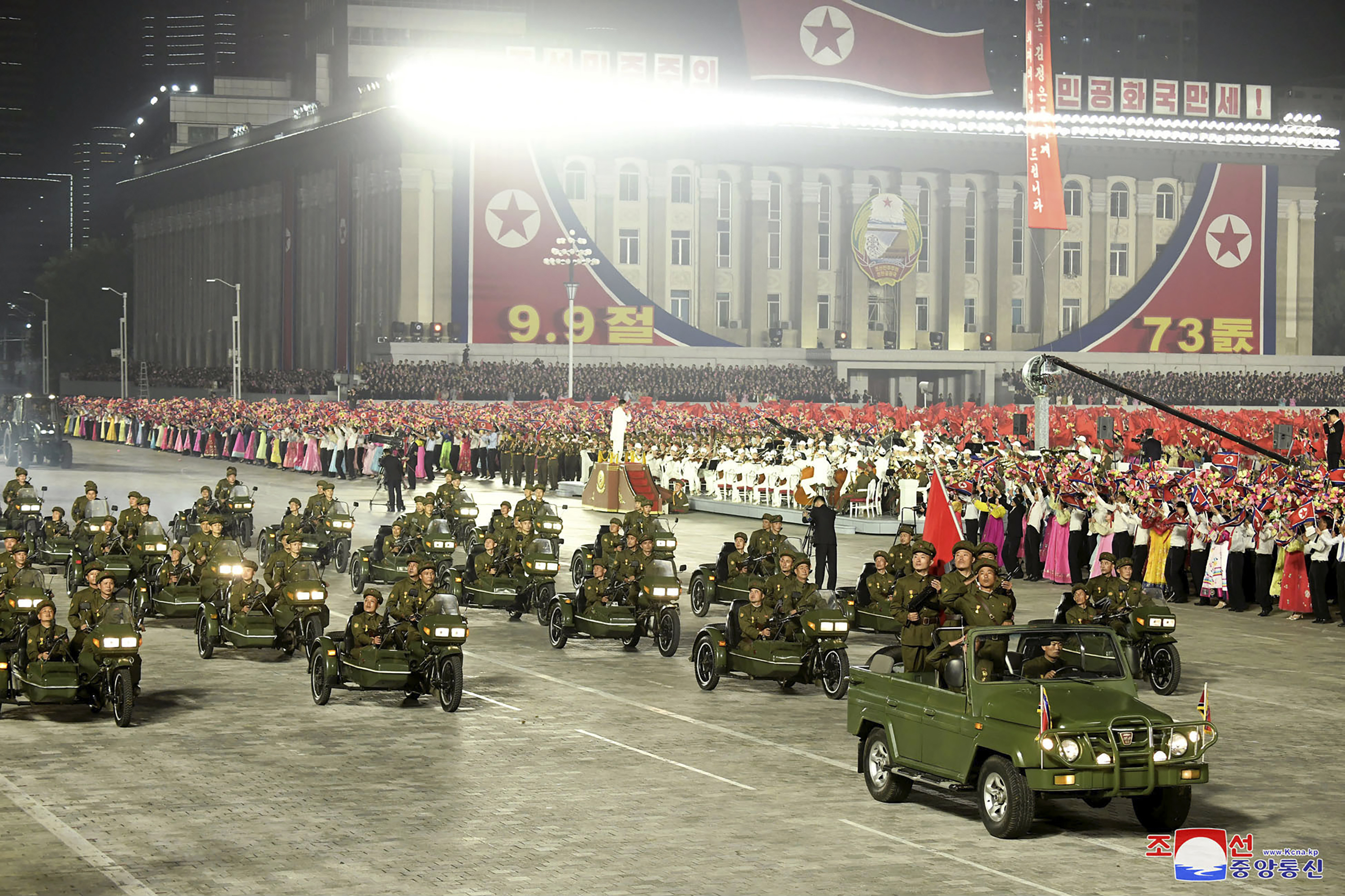 Seoul's Unification Ministry said 2013 was the last time North Korea held a parade of the Worker-Peasant Red Guards, a national civil defence organisation consisting of millions of North Koreans between the ages of 17 and 60, which could loosely be compared to military reserve forces of other countries.

KCNA described Red Guard units from Pyongyang and other regions marching through the square and praised their contributions in rebuilding communities destroyed by natural disasters and efforts to improve the economy.

The marchers also included anti-virus workers from the Ministry of Public Health, who paraded in bright red hazmat suits and masks. KCNA credited them with "firmly protecting the security of the country and its people from the worldwide pandemic."

READ MORE: North Korea's Kim Jong-un vows to be ready for confrontation with US 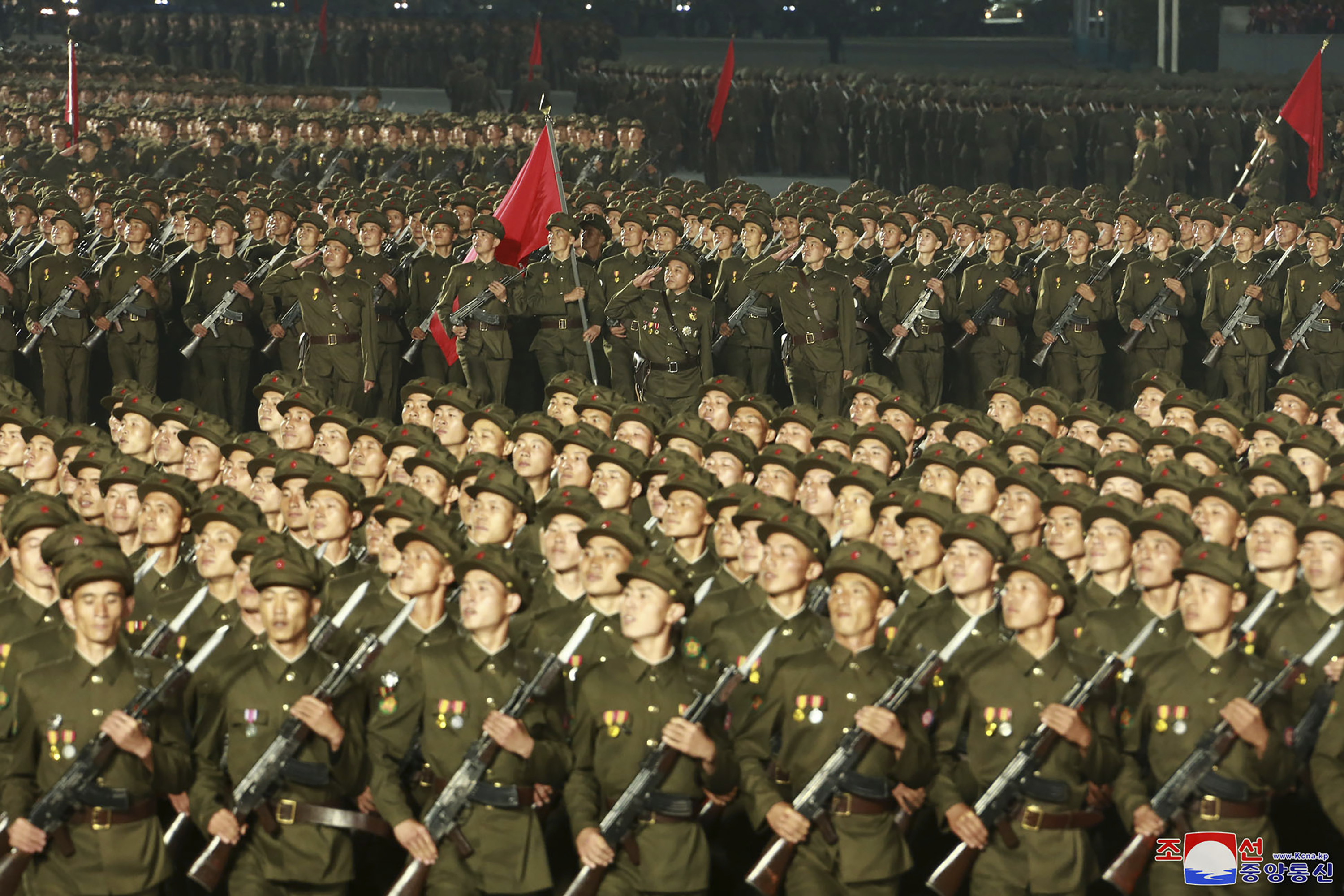 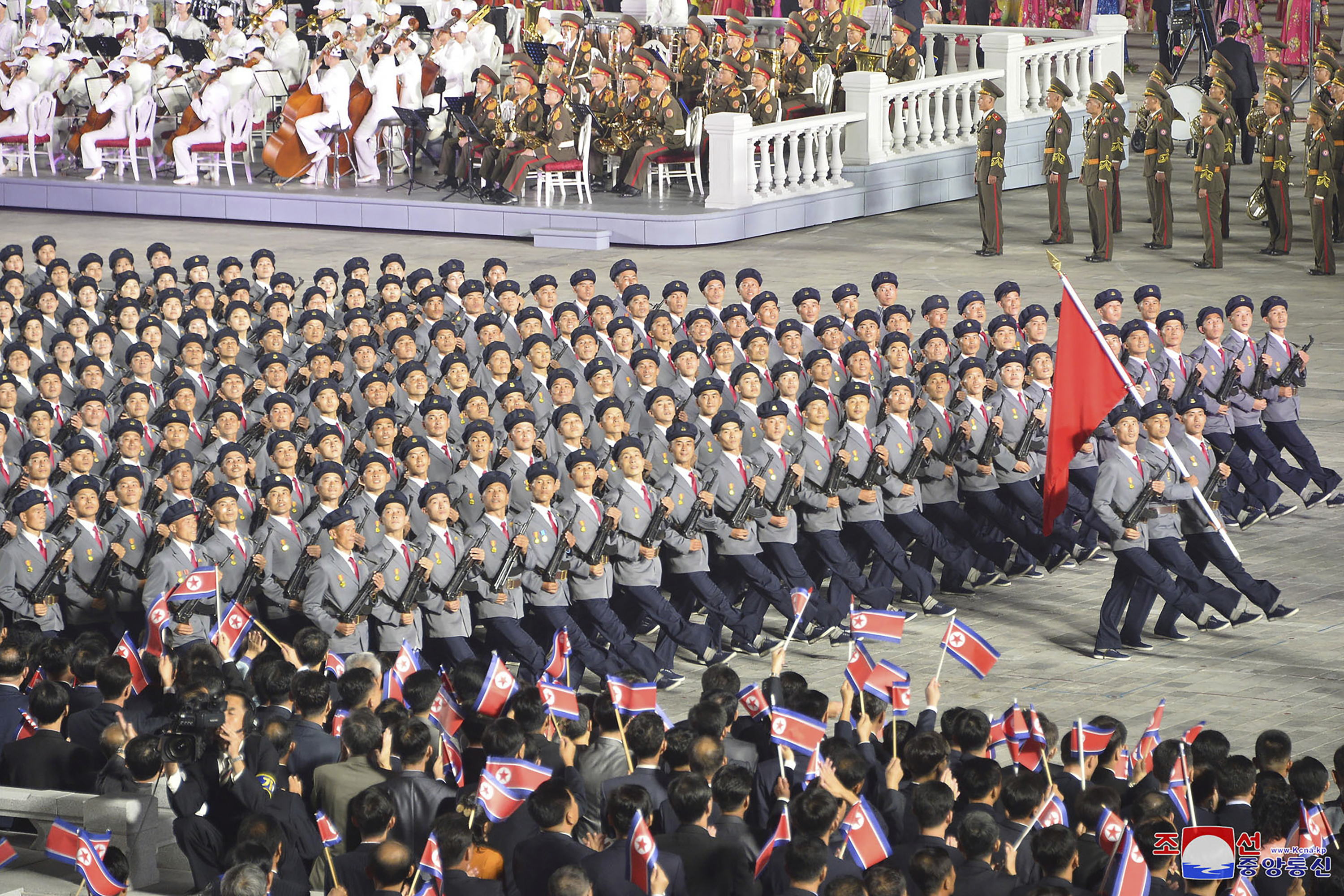 It said Ri Il Hwan, a member of the ruling Workers' Party's Politburo, said in a speech that the government will continue to strengthen its defence capabilities and "firmly defend the dignity and fundamental interests of our people and solve everything our own way with our own efforts on the principle of self-reliance."

The event was the third straight parade held at night — timed for spectacle.

Amid the stalemate in diplomacy with the US, Kim and his powerful sister have emphasised that North Korea will boost its nuclear deterrent and preemptive strike capabilities while demanding that Washington abandon its "hostile" policies — a reference to the continuing US economic sanctions and refusal to accept North Korea as a nuclear power. 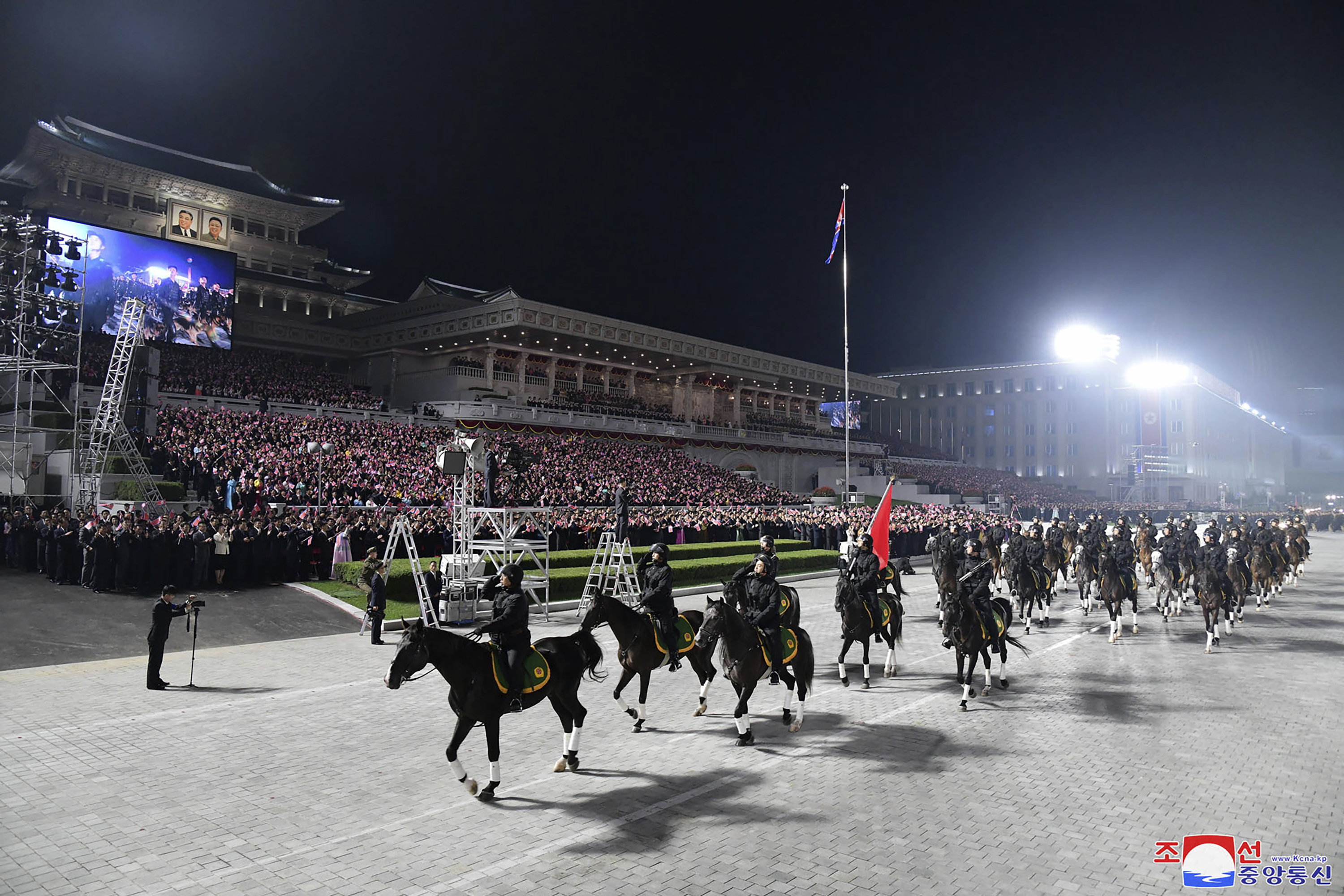 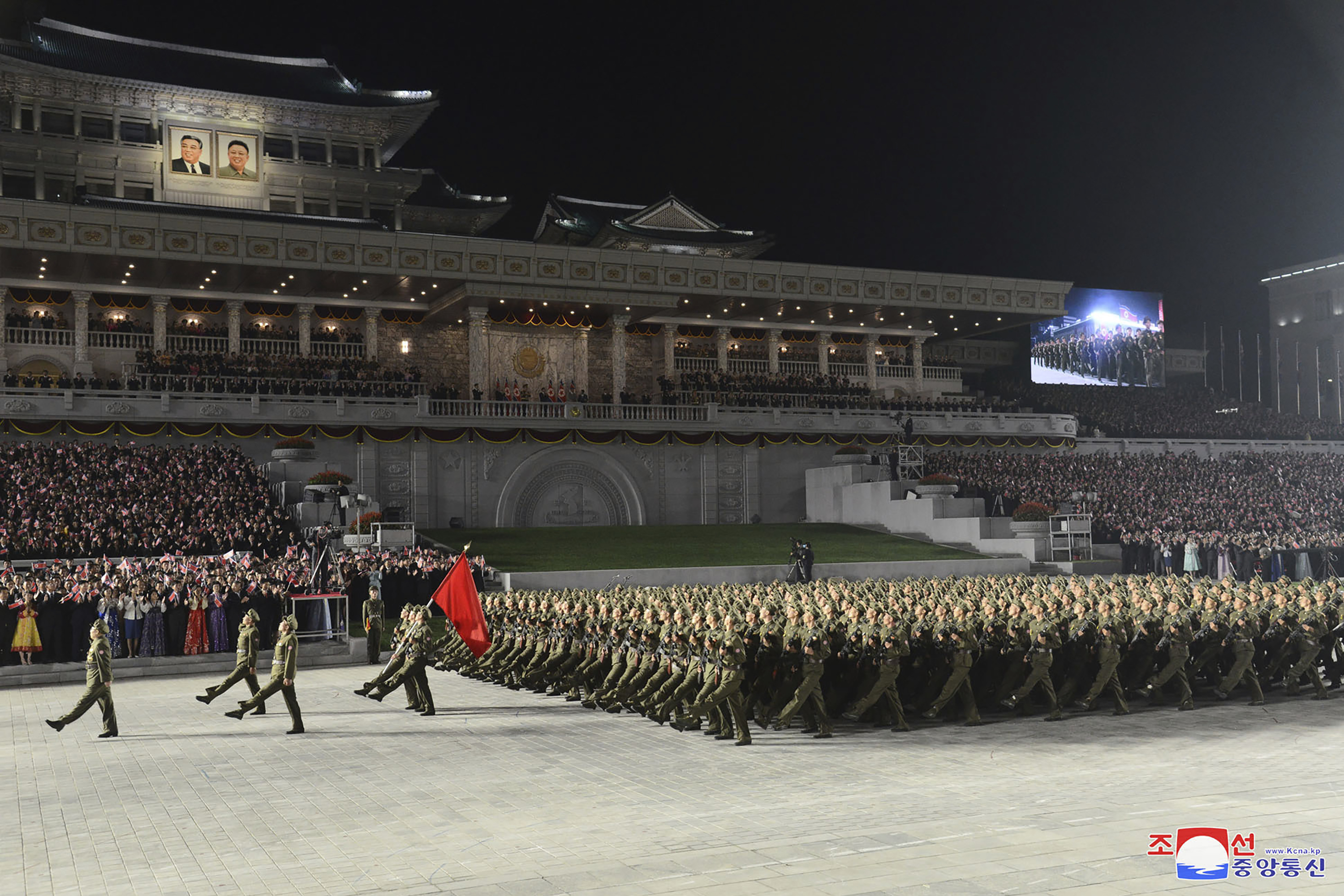 But experts say Kim is facing perhaps his toughest moment as he approaches a decade in rule, with North Korea maintaining an indefinite border lockdown to keep out the coronavirus, and no prospect in sight for the ending of international sanctions.