Fishing boats have washed up on Japan’s north coast, carrying the bodies of dead North Koreans, more than 1,000 kilometres from their homeland.

For years, Japan's north coast had been the site of a disturbing phenomenon: fishing boats washing up on shore carrying the bodies of dead North Koreans, more than 1000 kilometres from their homeland.

The numbers in 2017 were unprecedented: More than 100 boats landed on the Japanese coast with 35 bodies on board.

Only 66 boats had washed up the year prior. 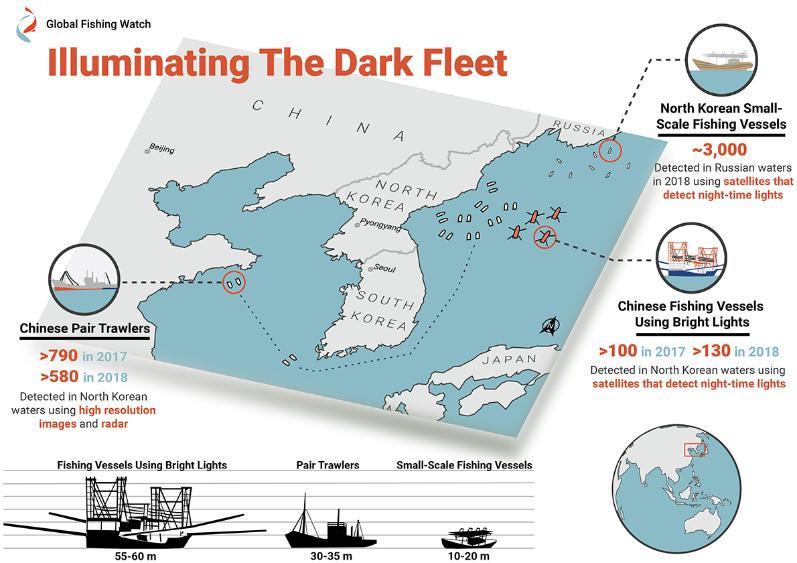 No one was able to explain why so many of these so-called "ghost ships" ended up in Japan that year.

One Japanese Coast Guard said it could be as simple as the weather. Others speculated that North Korea's ageing fishing fleet was to blame.

More of these rickety boats have continued to wash up on shore, though with fewer bodies.

The mystery has puzzled authorities for years, but a study published on Wednesday by international non-profit Global Fishing Watch offers a new, compelling theory.

The report's authors used various satellite technologies to analyse marine traffic in northeast Asia in 2017 and 2018 and found hundreds of Chinese fishing vessels were sailing in waters off North Korea. 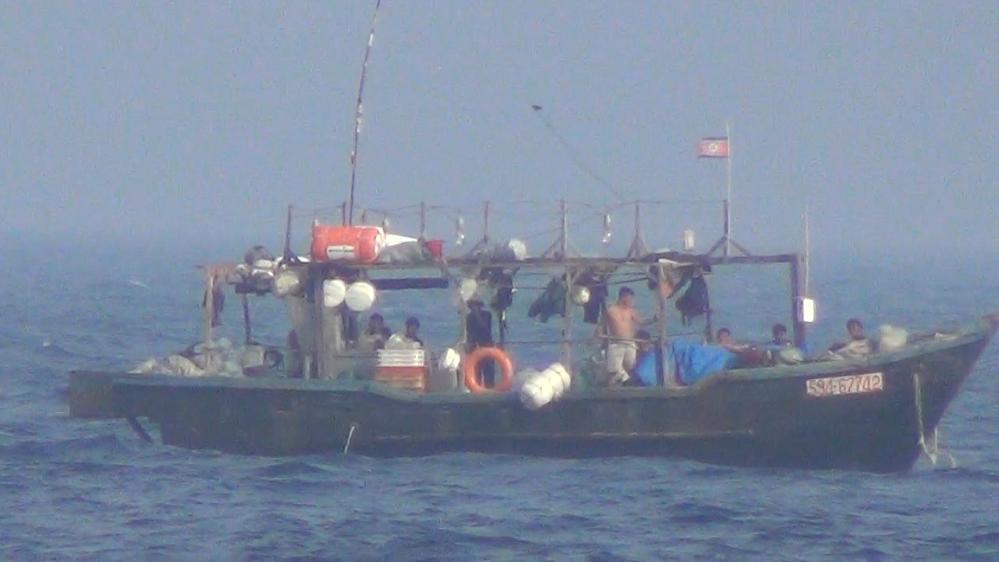 The Chinese ships appeared to be fishing there illegally, pushing North Korea's own fleet, which is poorly equipped to travel long distances, further away from the North Korean coast and into Russian and Japanese waters.

Pyongyang's fish trade, which was worth an estimated $419 million a year, was sanctioned in 2017 by the United Nations Security Council as part of its effort to punish the Kim Jong-un regime for its repeated ballistic missile tests that year.

But that does not appear to have deterred some 900 Chinese ships in 2017 and 700 the following year, according to Global Fishing Watch's report. 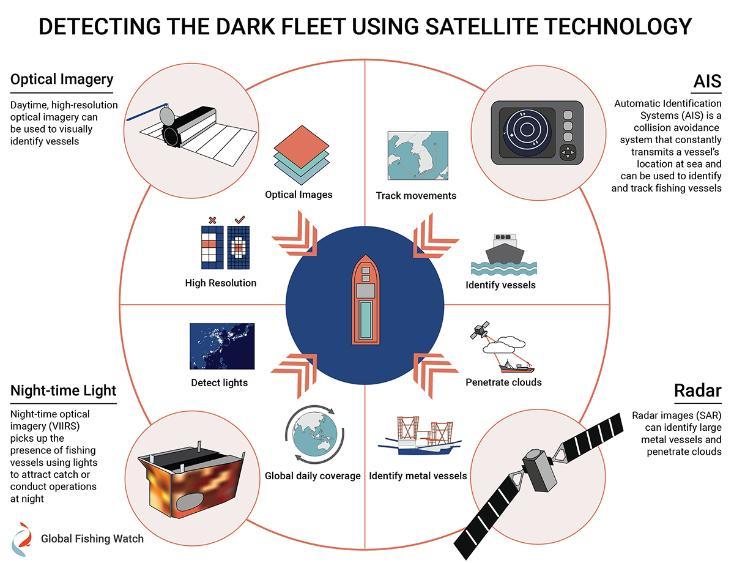 Global Fishing Watch said these Chinese ships likely caught more than 160,000 metric tons of Pacific flying squid, one of the region's most valuable seafood products, in 2017 and 2018 - more than South Korea and Japan combined during the same period. The estimated catch was worth more than $614 million.

While it's not clear if North Korea could have made that much money from fishing its own waters, it now appears that Pyongyang was able to recoup some of its lost catch by selling fishing rights to foreign operators, likely Chinese ones.

A United Nations report published in March claimed North Korea earned an estimated $167 million in 2018 by selling or transferring fishing rights in violation of UN sanctions.

"It is the largest known case of illegal fishing perpetrated by vessels originating from one country operating in another nation's waters," Mr Park said. 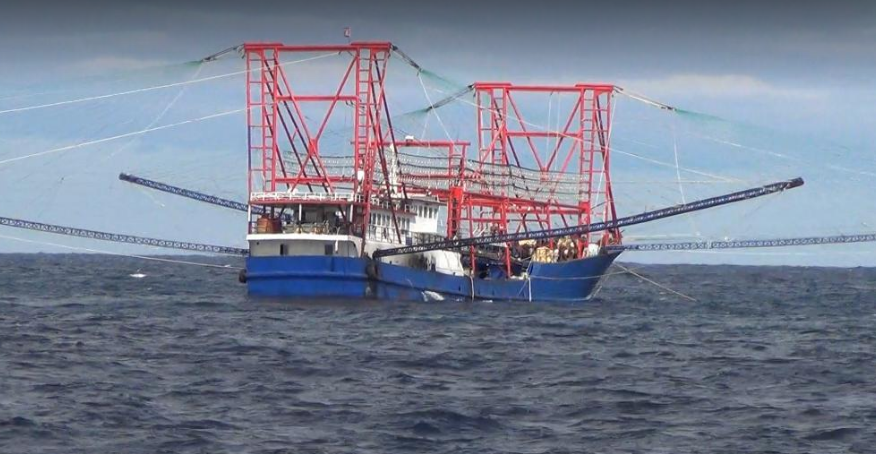 With so many ships near the North Korean coast, the country's own fishing fleet was then pushed out, forced to sail further away from shore to find their catch, and the consequences were deadly, according to Jungsam Lee, another one of the study's co-authors.

"It is too dangerous for them to work in the same waters as the Chinese trawlers," Mr Lee said.

"That's why they're pushed to work in Russian and Japanese waters and that explains why some of North Korea's damaged vessels showed up on the beaches of Japan."

Mr Park and the other experts said they were able to track these vessels using new satellite and radar technologies that weren't available in previous years.

Open-source intelligence NGOs and non-profits are increasingly using these resources to analyse marine traffic in the hopes of finding or better understanding tactics used to evade sanctions.

Global Fishing Watch said the vessels illegally fishing in North Korean waters were believed to be owned and operated by "Chinese interests" because that's where they were based.

However, ships involved in illicit activity in these waters , whether moving goods at sea to avoid the prying eyes of customs officials or dredging sand, often lack proper paperwork, making them harder to track.

Northeast Asia's waters are some of the most opaque and contested seas and fisheries anywhere in the world.

China, Russia, Japan and North and South Korea are all engaged in some sort of territorial dispute with one another.

Fish stocks have been declining dramatically in recent years, another major problem the parties have failed to work out.

Pacific flying squid stocks have dropped by 80 per cent in South Korean waters and 82 per cent Japanese waters since 2003, according to Global Fishing Watch. 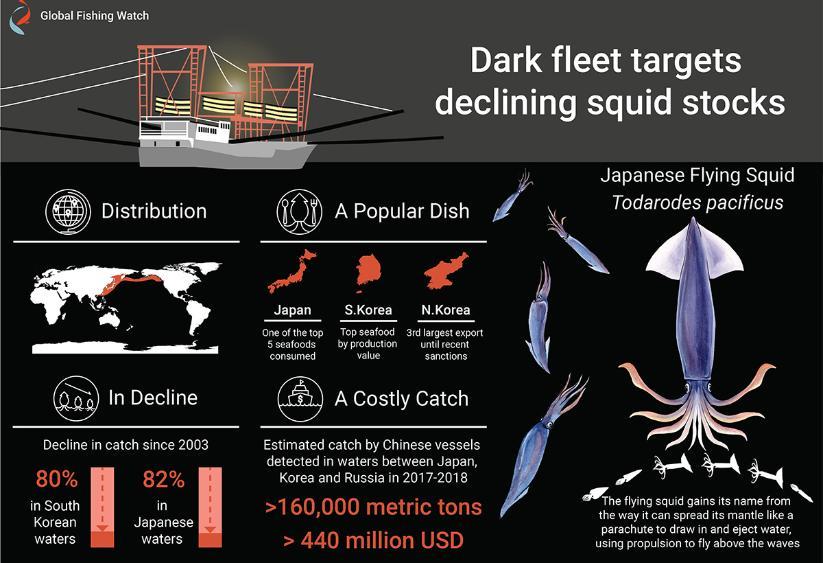 "While fishers and their families have watched their incomes plummet, academics are left puzzled over the most likely cause of this decline in catch," Park wrote in a blog post accompanying the study.

"Many point to overfishing as the biggest culprit, while some suggest that climate change may be playing a part, with changes in water temperature affecting spawning and migration patterns.

"It seems to make depressing but all too familiar sense."

Fisheries sustainability is a major issue worldwide. It has sapped money and jobs from coastal communities that rely on the trade and driven an increase in piracy in places where the fishing industry cannot rely on a functioning coast guard, like Somalia.

Mr Park said though Japan and South Korea have worked independently to make squid fishing more sustainable, "the absence of multilateral cooperation and information-sharing between all the countries involved in this transboundary fishery means it is impossible to get sound science and a regional management plan in place for the stock."

South Korea's Ministry of Oceans and fisheries said it was reviewing the findings, while Masanori Miyahara, the president of the Japan Fisheries Research and Education Agency, said in a statement accompanying the Global Fishing Watch study, the lack of shared data is "is a major challenge considering the critical importance of squid in the region."

"Illegal fishing in these waters is a very serious matter in Japan," Mr Miyahara said.

Mr Park said his team's research has highlighted a "fundamental failure in properly and transparently managing a shared resource" and there is an "urgent need for cooperation between the countries involved in this fishery."