When Scott Morrison invoked Martin Luther King Jr after seeing a “good meme on the weekend” he indulged a conservative fantasy. That King, through the power of Christian virtue and individual courage, changed the world. All. By. Himself.&nb… 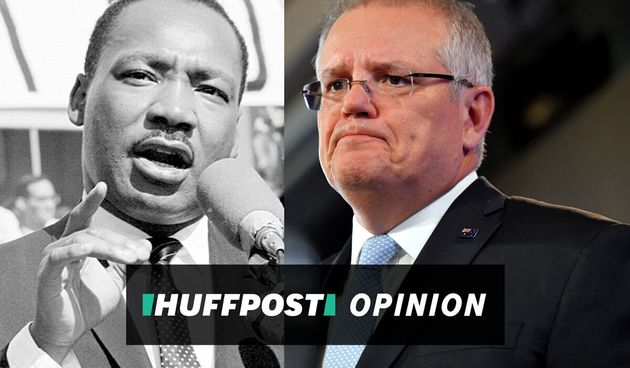 When Scott Morrison invoked Martin Luther King Jr after seeing a “good meme on the weekend” he indulged a conservative fantasy. That King, through the power of Christian virtue and individual courage, changed the world. All. By. Himself.

This fable, as noted by historians such as Jeanne Theoharis, is used to undermine collective resistance to racism and economic oppression today. Since the emergence of the Black Lives Matter (BLM) movement, accelerated by the death of Trayvon Martin in 2012, US conservatives like Mike Huckabee have depicted BLM as unworthy successors to King. They argue that King was so peace loving and respectful that he would have disapproved of BLM. King would never have “taken a highway,” that is marched in the streets and disrupted traffic, to make a point. It is an ahistorical argument.

Yes, King believed in nonviolence to his last breath. But he was disruptive. When the Kennedy brothers urged King to move slowly on civil rights, he and the movement pressured the Kennedy administration with a campaign in Birmingham. When President Johnson urged King to not protest in 1965, King and the movement protested in Selma and forced Congress to pass the Voting Rights Act of 1965.

Although he received most of the credit, King did not do this all by himself. He acted in concert with women, youth, unions and many others. They did not wait. In fact, King’s second book was entitled “Why We Can’t Wait.”

Protestors in America cannot wait today. The times are desperate. More than 42 million Americans have filed for unemployment benefits in the past 2 months. Over 100,000 people have died due to COVID-19, which has hit African American and other minority communities disproportionately harder, as does almost any destructive event.

The far-right (mostly white) is armed to the teeth with military weapons, and yet African Americans are stereotyped as violent. And extraordinarily, President Trump is urging that guns be turned onto the citizens of his own country: “When the looting starts the shooting starts,” he Tweeted. Instead of deescalating the crisis, he is pouring accelerant onto the flames.

The death of George Floyd was more than “cringeworthy”, as the PM put it. It was an act of brutal racism designed, as all lynching is, to put Black people in their place: under the knee of white supremacy. It showed, again, that to many Americans, Black lives don’t matter.

Our prime minister indulged another fantasy: Australia does not have its own Black deaths in custody crisis. We know 432 Indigenous Australians, including David Dungay in Sydney, have died in custody since 1991. What is the prime minister doing to redress this crisis? Morrison can say he is relieved to live in Australia because he is a white heterosexual male. If he put himself in someone else’s shoes, he might think differently.

It’s true, King disapproved of riots. But he understood why the urban uprisings of the sixties happened: “Social justice and progress are the absolute guarantors of riot prevention. There is no other answer. Constructive social change will bring certain tranquillity; evasions will merely encourage turmoil.”

The US has for too long evaded some of the hard decisions necessary to create the “tranquillity” that many thought King would bring to the nation . To restart down that road, the criminalisation of Black life and rampant economic inequality have to end.

READ:  Dogecoin is now worth $77 billion

“These are revolutionary times. All over the globe men are revolting against old systems of exploitation and oppression, and out of the wombs of a frail world new systems of justice and equality are being born.”Martin Luther King Jr

King disrupted the racist status quo of his time. In his final book, King wrote “These are revolutionary times. All over the globe men are revolting against old systems of exploitation and oppression, and out of the wombs of a frail world new systems of justice and equality are being born.” Take away the masculinist slant, and that quote could be a prediction of the road ahead. But only if injustice is eliminated.

It takes more than a meme to understand Martin Luther King.

In Australia, if Morrison really wants to channel King, he should stop Black deaths in custody, tax wealth, lift the value of JobSeeker, and let the next boat load of oppressed refugees into Australia.

That’s what King would do.