Some experts have labelled the weapon a “flying Chernobyl”.

New satellite images obtained by CNN show Russia may be preparing another test of its nuclear-powered cruise missile, known as "Skyfall"-a controversial weapon that is designed to defeat US defence systems.

The photos, which were captured on August 16 by the commercial satellite imaging company Capella Space, offer "strong indications Russia was preparing to test a nuclear-powered cruise missile" at a known launch site located near the Arctic Circle, experts at the Middlebury Institute of International Studies Center for Nonproliferation Studies who analysed the photos told CNN.

US officials are aware that Russia could be preparing another test of what it calls the "Burevestnik" missile as part of its advanced weapons program, according to a source briefed on the matter.

The CIA declined to comment and the Pentagon and the Russian Ministry of Defence did not immediately respond to CNN's requests.

"Using a nuclear reactor would, in principle, give the cruise missile unlimited range to fly under and around US missile defense radars and interceptors," according to researcher Jeffrey Lewis, a weapons expert at the Middlebury Institute who reviewed the images.

There are "substantial questions, however, about whether the system can be made to work successfully, to say nothing of the threat that testing this system may pose to the environment and human health," he added.

Those risks have prompted some experts to call the weapon a "flying Chernobyl," Mr Lewis told CNN, noting an August 2019 effort to recover a missile that had crashed into the White Sea resulted in an explosion that killed five Russian technical personnel.

At the time, Mr Lewis told CNN that satellite imagery suggested that the incident might have been related to the development of a nuclear-powered cruise missile. 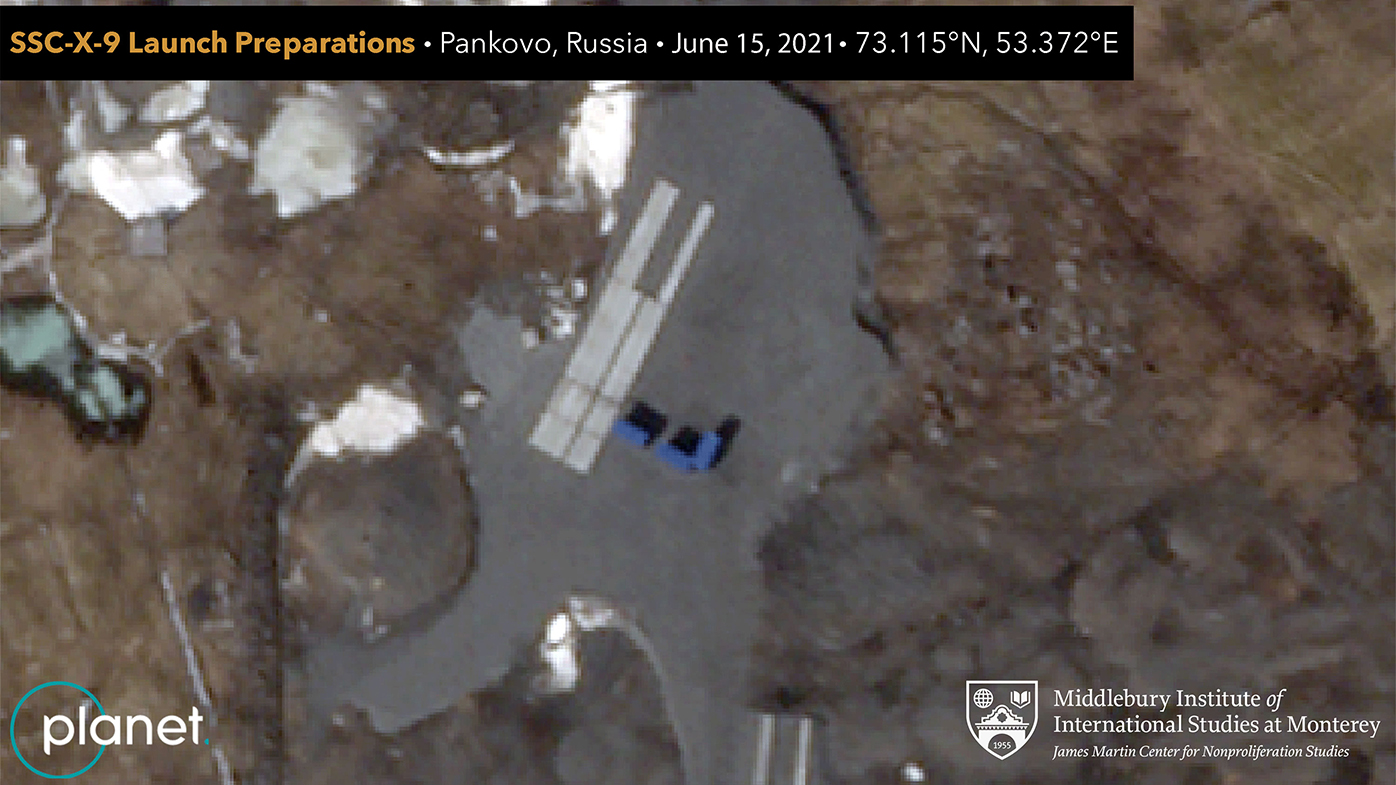 Russia conducted at least one test flight of the nuclear-powered cruise missile from the same site near the Arctic Circle in November 2017. Moscow reportedly carried out multiple other tests in the months that followed, though none were considered successful.

In March 2018, Russian President Vladimir Putin released a video of a nuclear-powered cruise missile test, which allowed open-source researchers, including analysts at the Middlebury Institute, to identify the location, Mr Lewis told CNN.

Researchers have been monitoring this site in recent months and satellite images taken by commercial satellite imaging company Planet over the summer showed cargo ships visiting this location and supplies piling up at a support area, according to Mr Lewis. More recently, Russia issued a "notice to mariners" warning of hazardous operations to be conducted between August 15 to 20 near the known Burevestnik test site near Pankovo on Novaya Zemlya.

A high-resolution radar image taken on August 16 showed "Russian personnel had erected a large environmental shelter to protect the missile and the crews preparing the launch from the harsh weather," according to Mr Lewis. 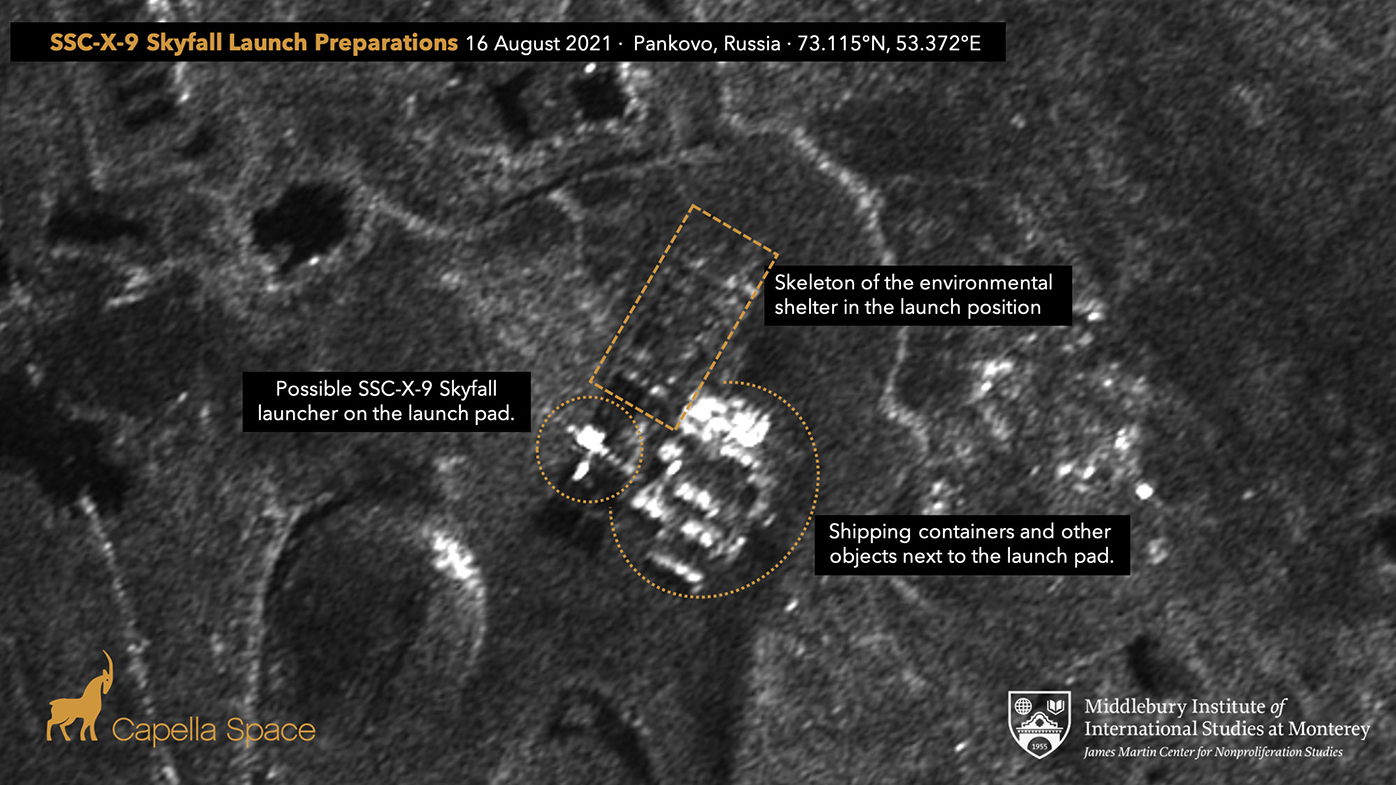 "This shelter was retracted, revealing a large object on the launch pad, which is a possible SSC-X-9 Skyfall launcher," he said. "There are also a significant number of objects next to the launch pad that are likely vehicles and shipping containers. None of these signatures were present the last time the site was imaged optically in June."

READ:  US cops debated whether to arrest man before shooting him

Russia has been modernising its strategic nuclear weapons and delivery systems to counter US and NATO and bolster its claim to be a major military power, raising fears of another nuclear arms race as the US also sets about upgrading its nuclear arsenal.

While Moscow and Russia renewed the New START Treaty in February, shortly after President Joe Biden took office, the US has withdrawn from two landmark arms control treaties with Russia, the Intermediate Nuclear Forces Treaty in 2019, and the Open Skies Treaty in 2020.