Italy is seeing more relief from the coronavirus outbreak in its jammed intensive care units, with 74 fewer beds in use over the past day nationwide.

Italy is seeing more relief from the coronavirus outbreak in its jammed intensive care units, with 74 fewer beds in use over the past day nationwide.

Civil protection chief Angelo Borrelli said the dip in ICU saturation was "important news because it allows our hospitals to breathe".

Intensive care wards in Lombardy, the epicentre of the European outbreak, have been full for weeks but on Saturday there were 56 fewer beds in use than the day before. 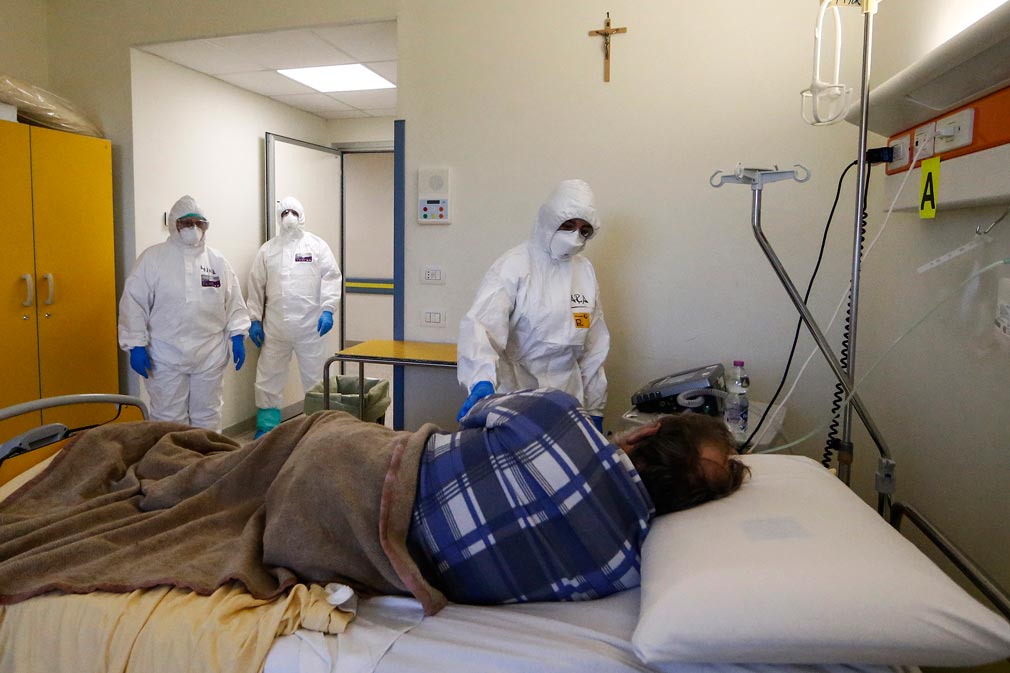 The death toll continued to mount, with 681 new victims bringing the world's highest toll to 15,362.

The government is demanding Italians stay home and not take the levelling off of new coronavirus infections as a sign the emergency is over.

The demand follows evidence that more and more Italians are relaxing restrictions.

Top government and regional officials took to national television Saturday after photos were published in leading daily Corriere della Sera and La Stampa showing huge crowds of people out shopping in Naples, Rome, Genoa and even the Veneto city of Padua. 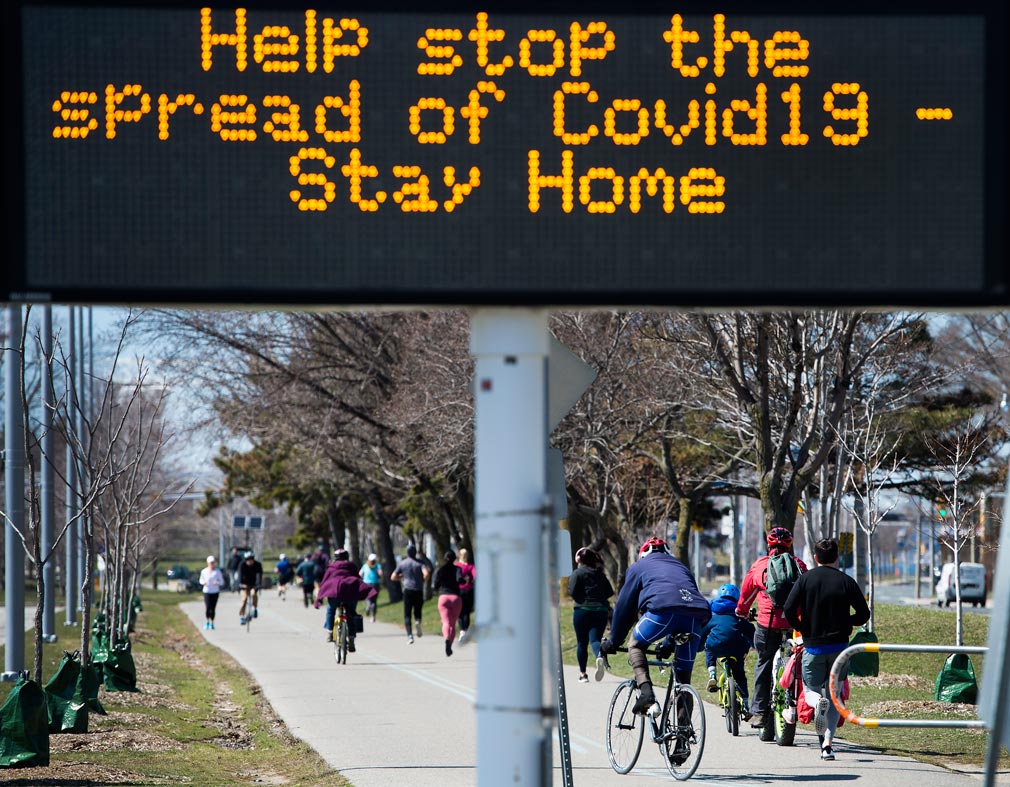 Prime Minister Justin Trudeau says Canada won't bring retaliatory or punitive measures against the United States after the Trump administration announced it would prevent the export of N95 protective masks.

Mr Trudeau says he will speak to President Trump in the coming days. He says his officials are having constructive conversations with American officials.

Mr Trudeau says he will tell Mr Trump both countries are interlinked in ways that it would damage both if supply chains are cut.

The prime minister says Canada ships gloves and testing kits to the US and notes materials from the N95 masks originate in Canada.

Manufacturing giant 3M says there are significant humanitarian implications of ceasing N95 masks to health care workers in Canada and Latin America, where 3M is a critical supplier of respirators. 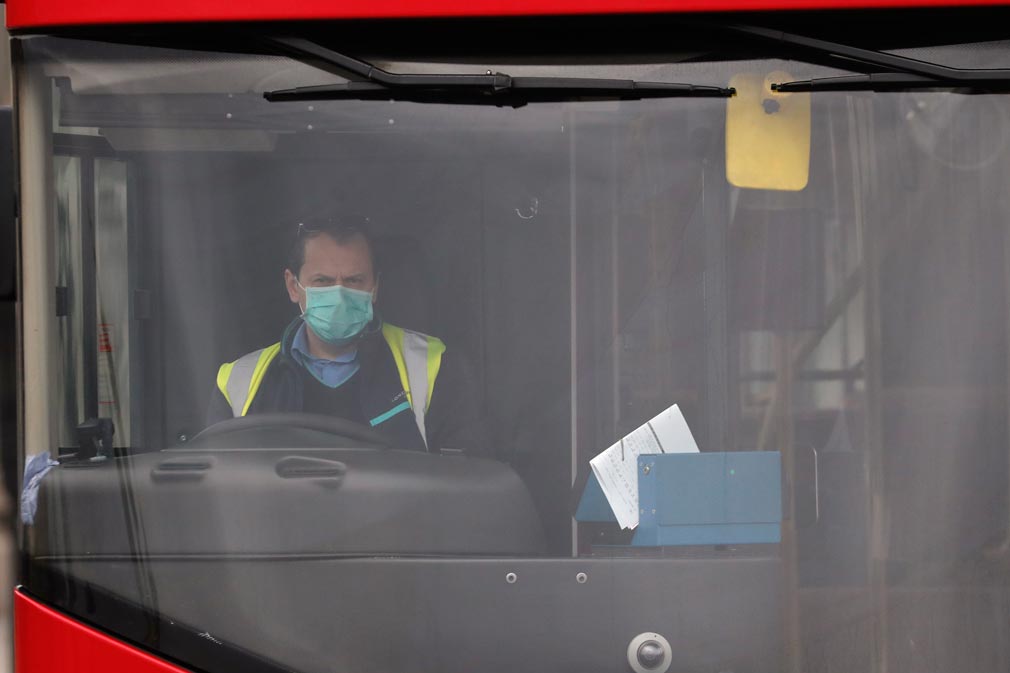 A trade union says five London bus workers have died after being diagnosed with COVID-19. Three were drivers and two were controllers.

Peter Kavanagh is regional secretary of the Unite union and called the deaths a terrible tragedy. London's subways and buses have continued to run a reduced service since the UK went into lockdown in a bid to slow the spread of the new coronavirus.

Bus ridership has plummeted by more than 75 percent but the drivers who died may have been infected before the lockdown.

Mr Kavanagh says the union is working with transit operator Transport for London to ensure bus drivers are safe.

Britain meanwhile is temporarily releasing about 4000 inmates to ease crowding and try to slow the spread of the new coronavirus in prisons.

The Ministry of Justice says "low-risk" offenders will be freed with electronic tags. People guilty of violent or sexual offenses or terrorism will not be eligible for release. 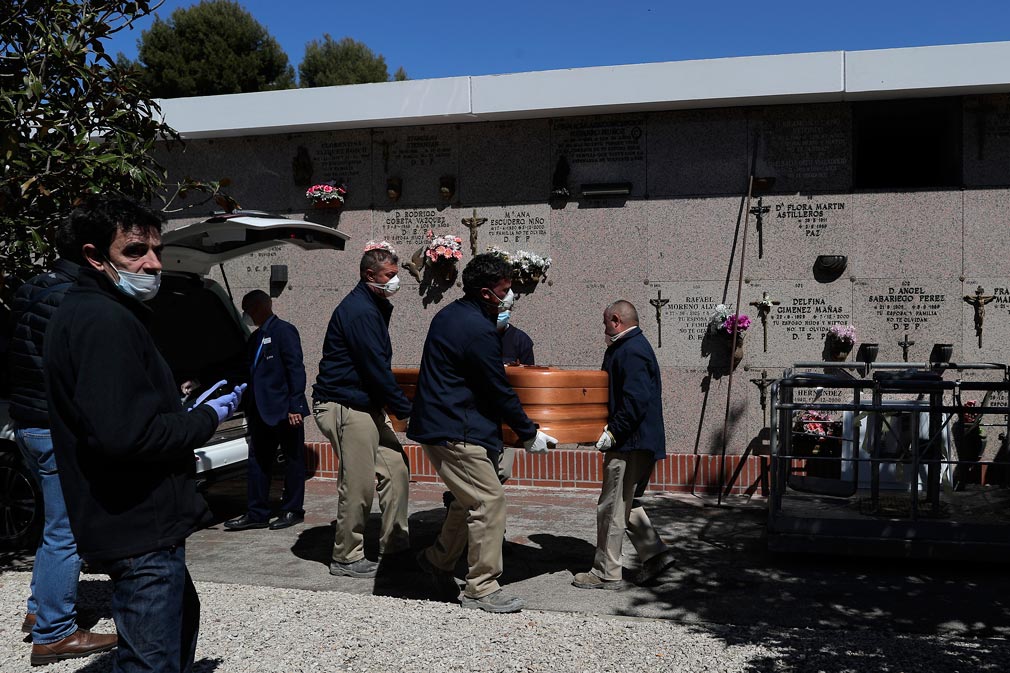 Spanish Prime Minister Pedro Sánchez says that his nation ravaged by the coronavirus pandemic is "starting to see the light at the end of the tunnel".

Mr Sánchez said that if the current slowdown of the outbreak continues then Spain is on course to reduce its cases of the COVID-19. Current numbers show Spain has 124,000 cases of coronavirus and over 11,000 deaths.

Mr Sánchez gave a televised address to the nation Saturday and said Spain is close to reducing the spread of the virus. He implored citizens "to make more sacrifices" during the crisis.

Mr Sánchez used the address to announce that the government plans to extend the lockdown the country has been under for three weeks until April 26.

Mr Sánchez warned that when restrictions are loosened they will be rolled back gradually. He says it is unclear when all normal activities will be resumed.

Spain's Health Ministry says it has 18,324 infected health care workers as of Saturday. That represents 15 percent of the total number of infections in the country. 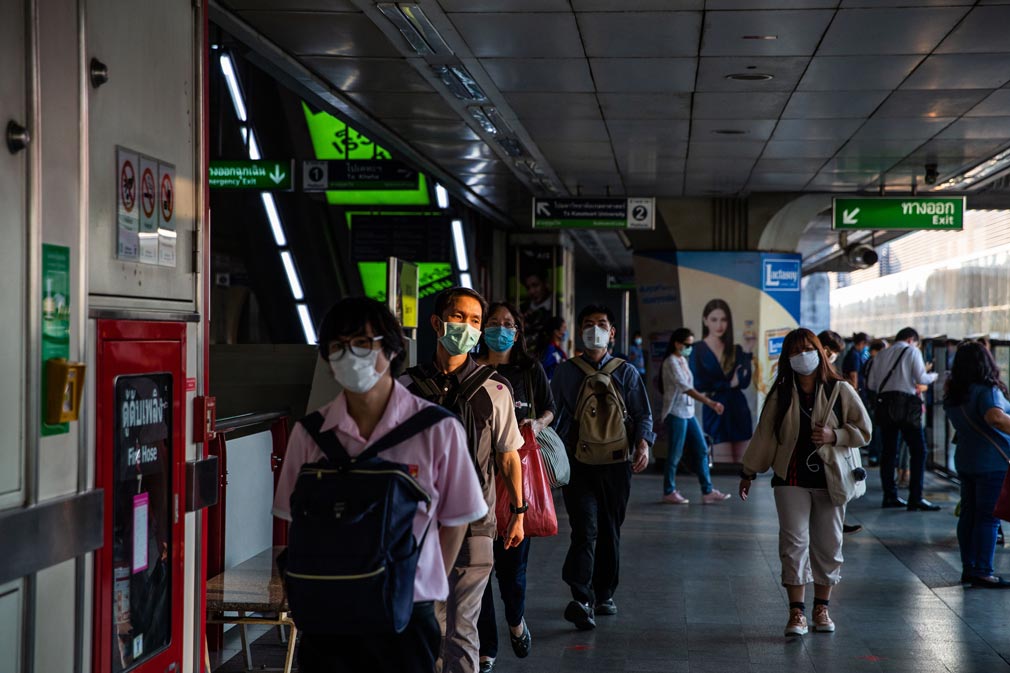 Aviation authorities in Thailand have banned passenger flights from landing for three days after chaos broke out when more than 100 returning Thai citizens reportedly refused to abide by regulations requiring them to go directly to state-run quarantine centres.

The ban by the Civil Aviation Authority of Thailand exempts other flight categories. It appears special flights to take foreign tourists back to their countries is still allowed.

The unrest at Bangkok's Suvarnabhumi Airport occurred Friday night. A security official allowed the travellers to proceed home. Thai media reports said the security official was removed from duty Saturday and errant travellers were ordered to report to the authorities.

A bureaucratic tangle appeared to contribute to the problem. Regulations for returning Thai nationals that had allowed them to self-isolate were changed Thursday to require them to go to a state quarantine facility.

Most, if not all, had completed travel arrangements before the change, which included approval by the relevant Thai embassy. 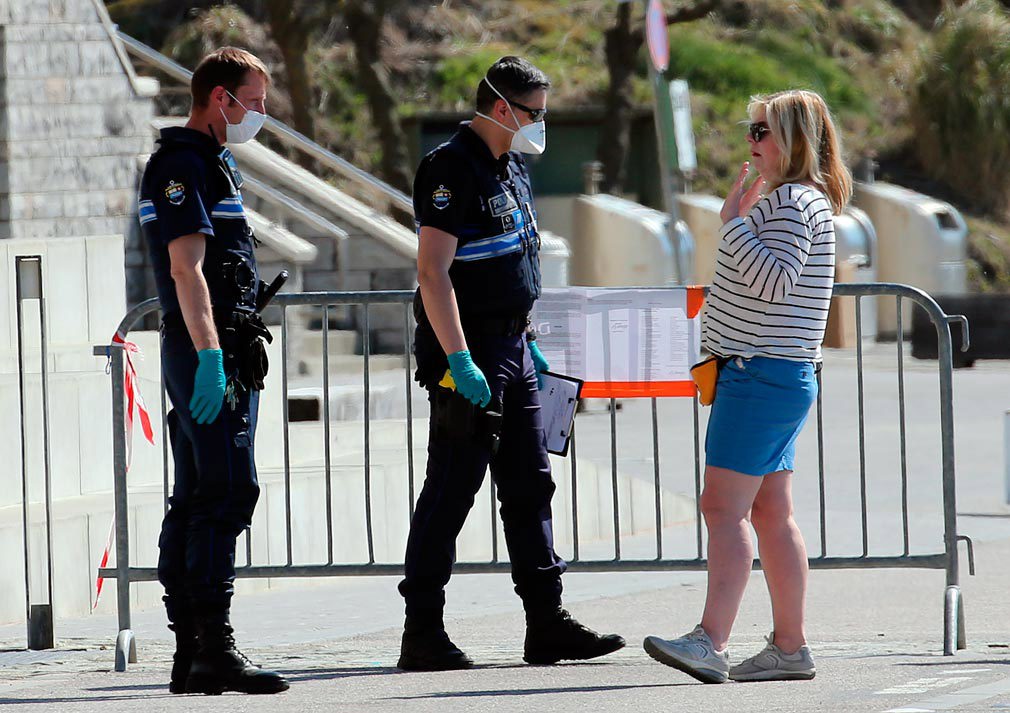 Greece recorded nine new fatalities from the coronavirus that raises the total number of deaths 68.

Officials said 49 men have died and the average age of those dying is 74. Total confirmed cases rose by 60 to 1673.

Authorities announced that lockdown measures have been extended until April 27. They also chided the "enlarged" number of those who ventured to highways outside Athens despite the unsettled weather. 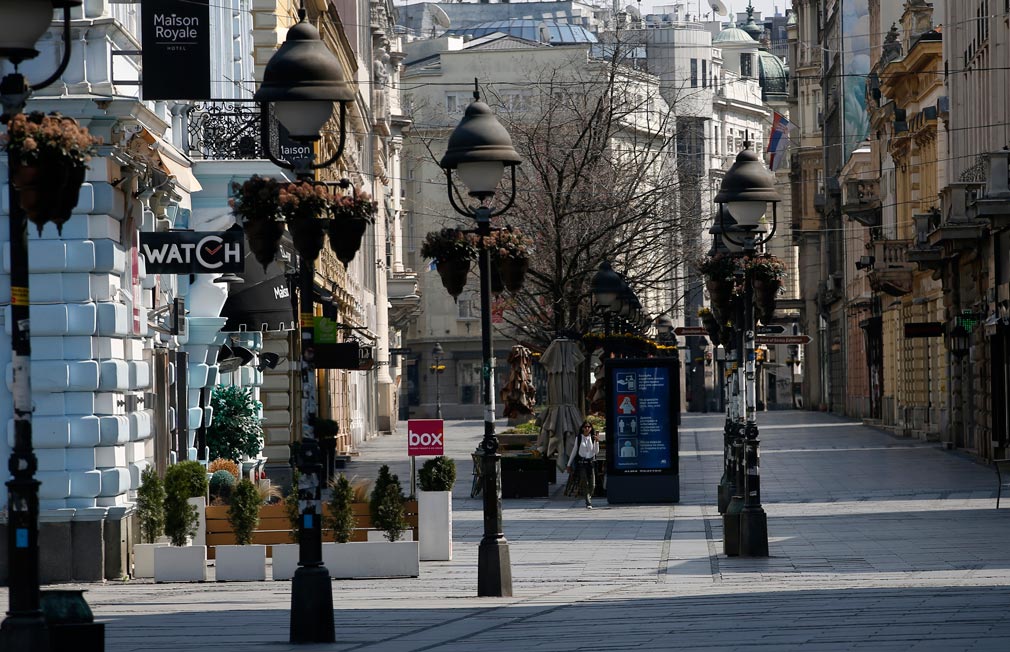 France's health minister says the government is in discussion with experts over whether all residents should be wearing a protective mask to fight the spread of the new coronavirus.

Olivier Veran indicated it has not been recommended by French authorities for everyone to wear a mask. But he says the idea is under discussion with the scientific council, virology experts and health agencies.

Veran also says the French government is committed to obtaining a plentiful supply of masks. He added "we have to be able to produce masks, for people who are not caregivers, who are what are called people who are on the second line, people who will be in contact with the public".

Serbian streets have emptied as a tightened curfew took effect on Saturday as part of measures designed to curb the spread of the new coronavirus.

The government extended the ban from 1pm Saturday until 5am on Monday to prevent people from leaving their homes. Previously the curfew was imposed from 5pm until 5am daily.

Children's playgrounds and entrances into Belgrade parks have been blocked with plastic tape and police are patrolling the main streets to ensure people stay inside. Police have used loudspeakers to disperse citizens from recreation areas in the city. 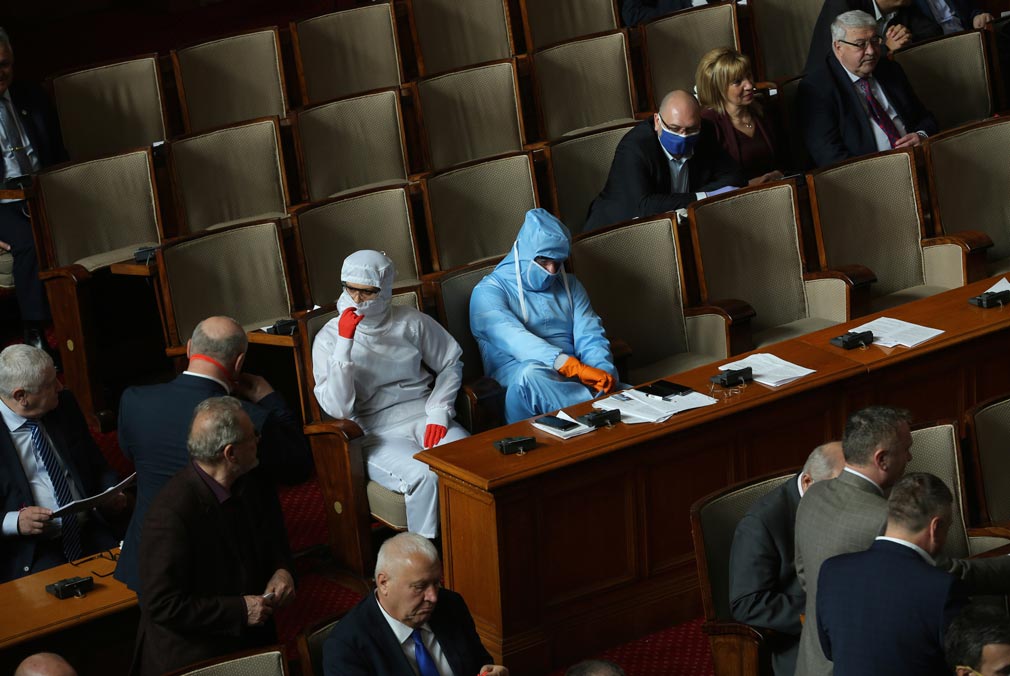 Bulgarians warned away from churches

Bulgaria's Orthodox Christian majority has been urged to stay away from church services during the upcoming Easter holidays.

The Balkan country of seven million has extended a nationwide state of emergency by a month until May 13 to contain the spread of the coronavirus outbreak. It already has closed schools, restaurants, parks and sports facilities, and banned intercity travel and holiday trips.

But the Bulgarian Orthodox Church is resisting calls to close houses of worship, making it the only denomination in the country to do so.

Health officials have voiced fears that many worshippers might ignore the quarantine and attend the church services.