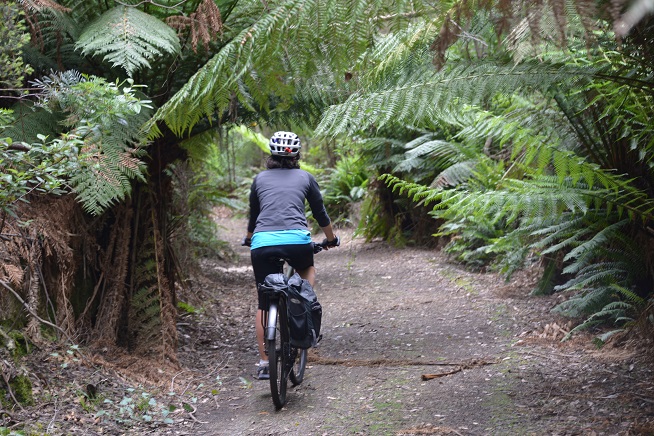 The much-anticipated extension to the North East Rail Trail is set to go ahead after a key funding component – $1.47 million in federal government support – was re-confirmed. The project had been under a cloud due after the original 2015 funding agreement had lapsed due to additional time needed by the Dorset Council. Bicycle Network […]

The much-anticipated extension to the North East Rail Trail is set to go ahead after a key funding component – $1.47 million in federal government support – was re-confirmed.

The project had been under a cloud due after the original 2015 funding agreement had lapsed due to additional time needed by the Dorset Council.

Bicycle Network Tasmania (BNT) said the Australian government is supporting the health, social and business benefits for local residents and visitors by funding the extension of the recreation trail.

“But they also create opportunities for local residents to use the trail to get around their local area and exercise.”

Federal MHR for Bass Bridget Archer said she made representations to maintain support for the project. “I was determined to still ensure the funding was delivered,” Archer said. She acknowledged the efforts of Deputy Prime Minister Michael McCormack for his efforts in working with her to find a solution.

“This funding supports job creation and tourism, which is more important than ever, particularly as the region looks to recover from the economic challenges of COVID-19,” Archer said.

The funding will now be delivered through the Community Development Grants Programme (CDG), providing the Council and the community with certainty that the project will go ahead. The funding was first allocated in May 2015 under the federal National Stronger Regions Fund, for a 63km trail from Launceston to Scottsdale.

The original 2015 proposal to extend the trail all the way back from Scottsdale to Launceston was met with some opposition from heritage rail enthusiasts. Stuart Bryce, Chair of North East Residents and Farmers who purport to prefer some kind of reinstated rail activities, described the ‘destruction of a heritage railway’ as ‘act of state sanctioned vandalism’ in a communication to Tasmanian Times in November last year.

He also claimed that there had been inadequate community consultation about the rail trail. “Strong community opposition, as exemplified by three surveys strongly supporting the retention of the rail line, caused three extensions and eventually, the withdrawal of the grant,” he said.

At their November 2018 Council Meeting, Dorset Council resolved to confirm its commitment to the construction of the North East Rail Trail.  Council also publicly stated its support of the ’eminently sensible compromise position’ of the state government which would see the Rail Trail commence in Lilydale and join up with the existing section in Scottsdale.

“This compromise position provides the heritage rail advocates with the opportunity to realise their vision of a heritage rail which would operate between Lilydale and Launceston (or Coldwater Creek),” says a statement on the Dorset Council web site.

Council Budget Estimates for 2020-21 show that Dorset Council had expected to receive $750,000 this financial year for the Rail Trail project.

The existing trail, to connect with the new section, is from Scottsdale to Tulendeena (Billycock Hill) through Tonganah, approximately 26km.